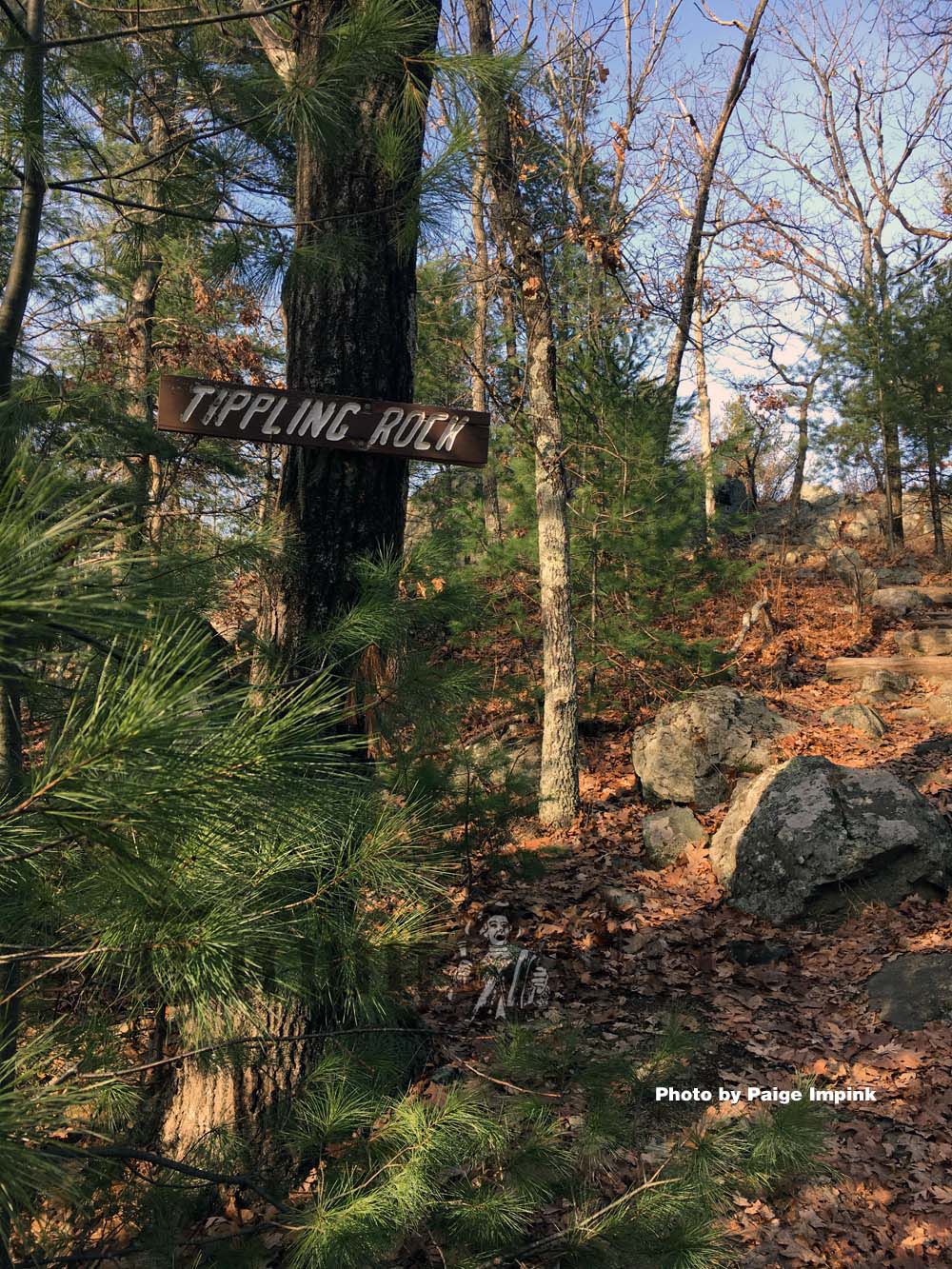 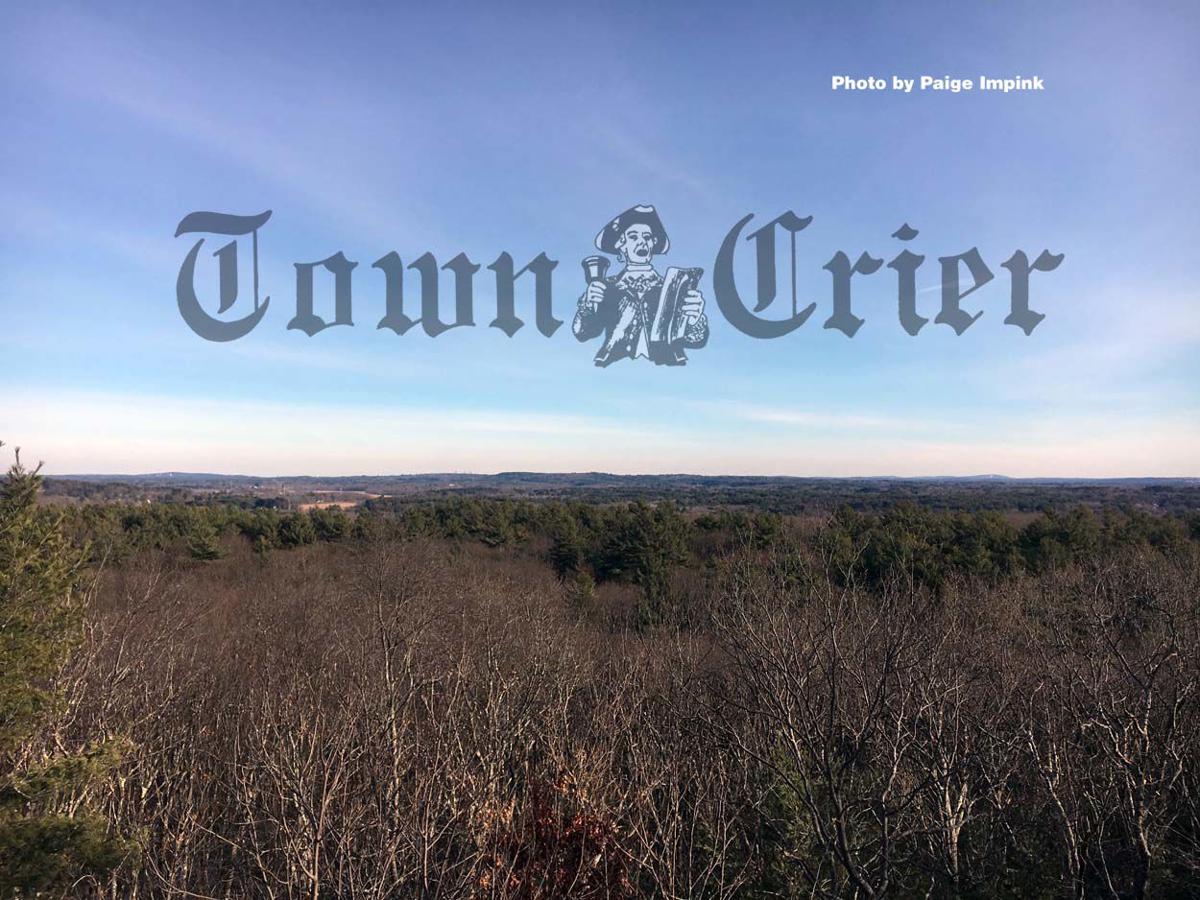 The mild winter weather presents opportunities to get out and explore without the annoyance of in­sects or extreme discomfort, and the absence of foliage affords views that reveal features that might otherwise be missed in woodland areas. (Always check for ticks, though.)

The cool weather is also perfect for hiking and ex­ploring without overheating. During the recent ho­liday break, we explored Tippling Rock, part of the Sudbury Valley Trustees and the Nobscot Reserva­tion, on the Sudbury/Fra­m­ingham line, and everyone agreed it was a worthwhile and achievable hike.

The wooded area leading up to Tippling Rock is a wide, pine needle-laden path which is clearly mar­ked and rises gradually. Dog walkers were in ab­undance, as well as families and trail runners. While the trail starts out along a residential area, it quickly achieves a more secluded feel, and with the absence of leaf cover, provides impressive views of areas west of Boston.

As we arrived at Tip­pling Rock, we were able to see all the way to Bos­ton, south to Blue Hill ski area in Canton, and some additional areas west of Boston, including Framing­ham’s Route 9 shopping area. A portion of the Bay Circuit Trail passes through the Nobscot Reservation, a greenway trail that stret­ches from Newburyport to Kingston. Portions of the BCT are clearly marked.

There are many theories about Tippling Rock, its origin and use. One thought is that the rock was used for communication across the distance by native peoples. There are also markings on the stone indicating some feather and wedge used to split it apart, a purported attempt by a local farmer to keep it from tumbling onto his grazing cows.

A reference to the area by Henry David Thoreau is noted in Natural His­tory of Massachusetts: “A stir is on the Wooster hills, And Nobscot too the valley fills, Where scarce you'd dip an acorn cup In summer when the sun is up, No more you'll find a cup at all, But in its place a waterfall,” according to a website created by Jan C. Hardenbergh.

Ford’s Folly is another feature of the property which we did not get to, but has a colorful story. Henry Ford purchased the Wayside Inn in Sudbury in 1923 to preserve it as a living history museum. He had a retention pond built to have a water source nearby in case of fire. The dam never held water effectively and as such earned its name.

From Tippling Rock, we followed the trail map to the fire tower at Nobscot Hill. Print a map at home, or put the map on your phone in order to navigate the network of trails without having to depend on a cell signal. The trail led through the Nobscot Scout Reser­va­tion, an impressive and well-maintained Boy Scout camp.

There is a 1700s small pox burial site near the camp, though we did not seek it on this trip. Once reaching the top of the hill, we discovered a large microwave tower and a fire tower (and a handy porta potty). The views were even more expansive from this location, elevation 602 feet.

The forest is full of pine, oak, and hemlock. One note; the trail was clear but there were some patches of ice. A new set of nano spikes made all the difference and if you are a frequent winter hiker, this investment is highly recommended to prevent slips and falls.