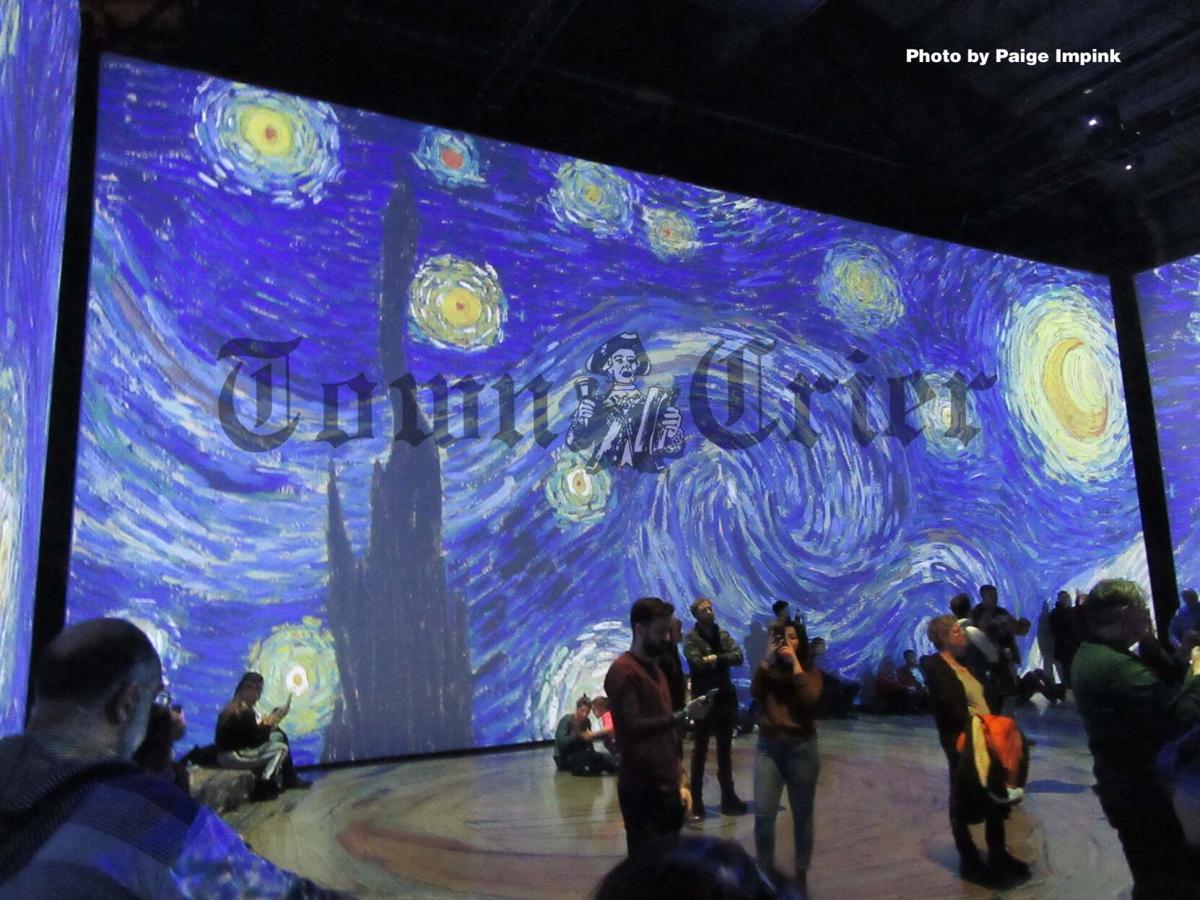 Iconic “Starry Night” is viewed in up-close detail when splashed across the walls and floor at the Strand.  (Paige Impink photo) 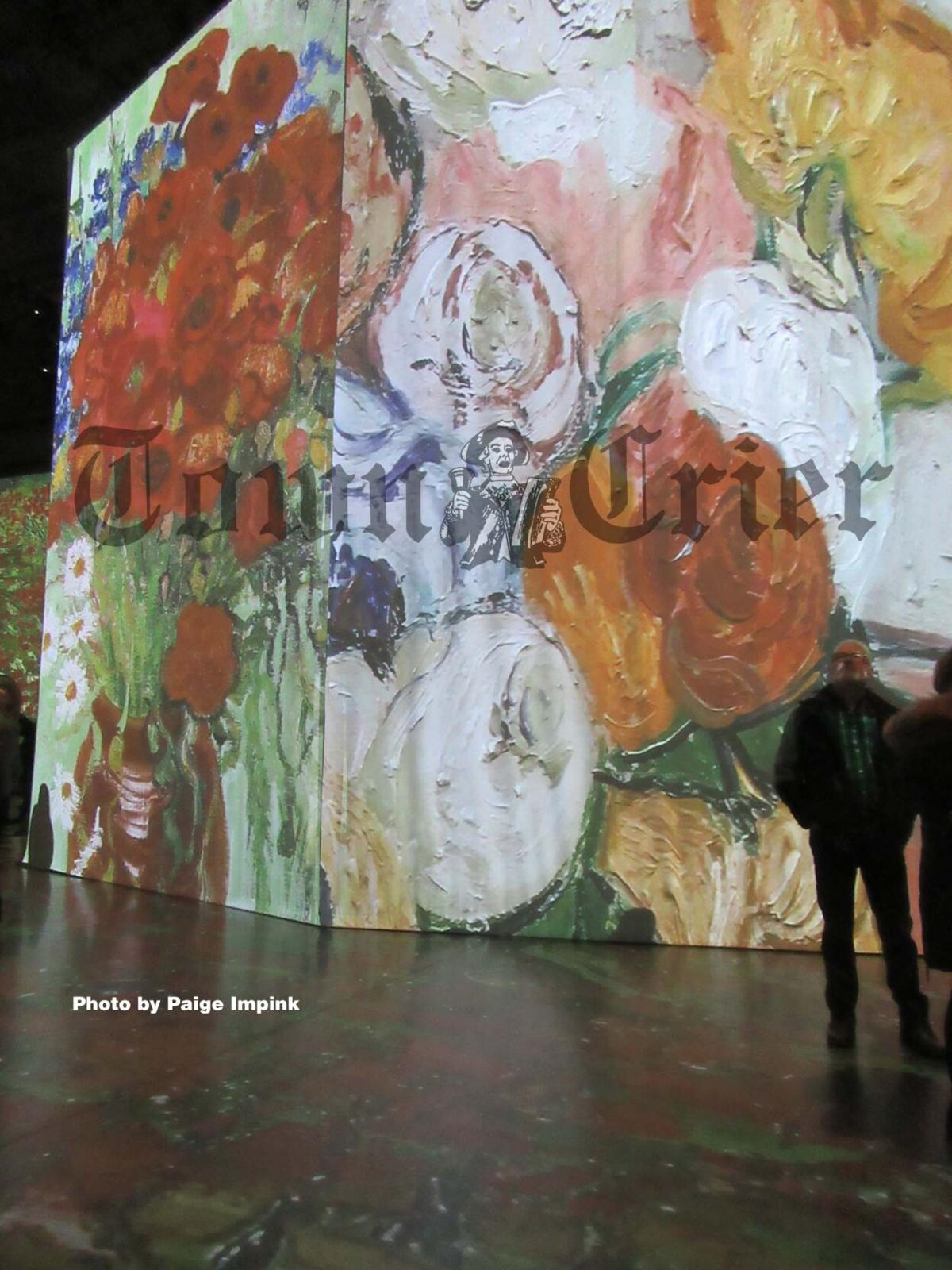 Works by Van Gogh soar to the rafters as part of the immersive exhibit at the Strand. Sketches, still life, and self-portraits are part of the show which runs through February. ( Paige Impink photo)

Iconic “Starry Night” is viewed in up-close detail when splashed across the walls and floor at the Strand.  (Paige Impink photo)

Works by Van Gogh soar to the rafters as part of the immersive exhibit at the Strand. Sketches, still life, and self-portraits are part of the show which runs through February. ( Paige Impink photo)

Scenes from his life ap­pear on enormous canvases which surround visitors, extending from the ceiling and spilling onto the floor, clothing and faces.

According to the organizers, over 30 HD projectors send images to 20 screens placed around the art space and onto a diamond-shaped center pillar in the style of “Image Totale,” a presentation style developed by Albert Plécy in the 1970s.

The works are from Van Gogh’s Arles period, Saint-Rémy-de-Provence period and Auvers-sur-Oise period. Interspersed are photographs of Van Gogh and his family and the many places where he lived and drew his inspiration.

A virtual reality component of the exhibition lets visitors don VR headsets and walk alongside Van Gogh, experiencing a day in the life of the artist. Van Gogh was born in the Netherlands in 1853. He was a tormented individual who took a while to find his calling.

He was the son of a pastor and was himself a preacher for a while, a bookseller and an art dealer before studying painting in Belgium. He eventually moved to Paris to live with his brother, Theo, and became part of the art scene in Paris in the 1880s.

Van Gogh was inspired by Japanese art as well as the Impressionist style, spending time with De­gas, Toulouse-Lautrec and Pissarro. From Paris he moved to Provence in the South of France.

Van Gogh had a famous falling out with artist Paul Gauguin, after which Van Gogh severed part of his own ear. He entered an asylum in Saint Rémy de Provence voluntarily, which became a time when he churned out many famous works.

Van Gogh’s death in Pa­ris in 1890 was the result of a self-inflicted gunshot wound. The paintings from his most prolific period of 1888 until his death are the main focus of the exhibit.

Visitors will recognize The Starry Night, Sun­flowers, Irises, Almonds Blossoms and the Church at Auvers, along with several familiar self-portraits.

The Strand has a timed ticket admission, and visitors follow a rope line through hanging interpretive panels which explain the life of Van Gogh. As one enters the large space through black curtains and experiences the projections, there is a backdrop of incredibly moving music which moves through the room.

Curated specifically for the program, the music of Bach, Mozart, Prokofiev, Schubert and others combines with the video ima­ges to transport visitors inside the paintings, es­sentially putting one in the scenes which are so vivid and bright.

If you are looking for an interesting art experience, do not miss this ex­ceptional program. https://vangoghexpo.com/boston/