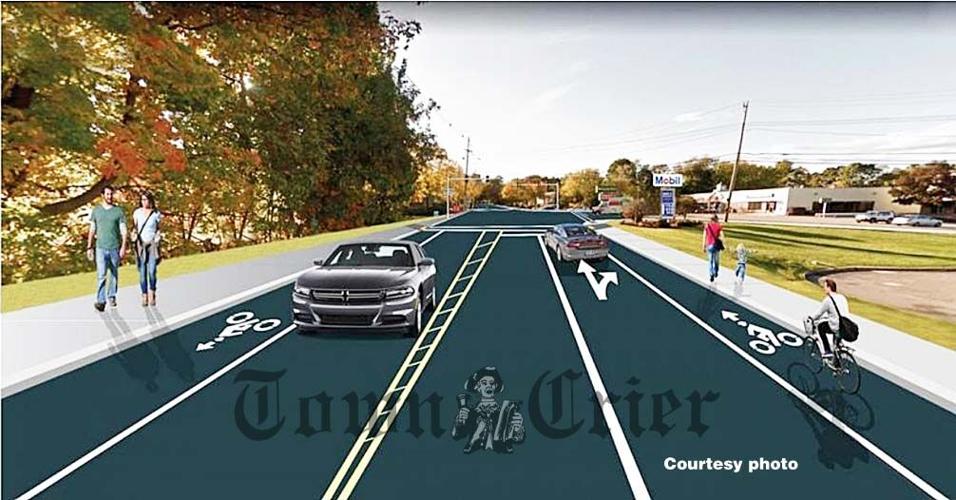 A rendering of the improved intersection, sidewalks and bike lane planned for Andover Street and River Road. The project is part of MassDOT’s Transportation Improvement Plan. (Courtesy Tewksbury Department of Public Works)

Some of the sidewalk installation anticipated for Fiske Street and Andover Street. Over 100 homes will have pedestrian access from Bailey Road in Andover to Andover Street in Tewksbury when the artery work is complete. (Courtesy of Tewksbury Department of Public Works)

A rendering of the improved intersection, sidewalks and bike lane planned for Andover Street and River Road. The project is part of MassDOT’s Transportation Improvement Plan. (Courtesy Tewksbury Department of Public Works)

Some of the sidewalk installation anticipated for Fiske Street and Andover Street. Over 100 homes will have pedestrian access from Bailey Road in Andover to Andover Street in Tewksbury when the artery work is complete. (Courtesy of Tewksbury Department of Public Works)

TEWKSBURY — A con­cept plan for new sidewalks along Fiske Street and Andover Street near the Loella F. Dewing Elementary School will be submitted by town engineers for a Complete Streets Grant from MassDOT as part of the town’s Five Year Capital Plan.

The project is design­ed to fill in gaps in the ex­isting sidewalk network to provide a seamless ar­tery from Bailey Road to Andover Street. The west side of Fiske Street will receive approximately 1,600 feet of new sidewalk, five feet wide.

Additionally, over 400 feet of sidewalk will be installed along Route 133 (Andover Street) from Fiske to the crosswalk for the school. Part of the project will include Americans with Disabi­li­ties Act-compliant (ADA) crosswalks installed in four locations to connect side streets with Fiske Street: Chivas Circle, Pen­ny Lane, Maplewood Road, and Woodcrest Drive.

Through these sidewalk installations, the Fiske Street neighborhood will have safe, pedestrian ac­cess to the Dewing school, and the retail and office locations on Andover Street. Fiske Street is a main connector between River Road in Andover and Andover Street in Tewksbury.

Two large developments in Andover near this site total over 300 apartments and condominiums, and traffic data shows Fiske Street receives approximately 3,000 vehicle trips per day. Two Lowell Regional Transit Au­thority (LRTA) bus stops are at the intersection of Fiske and Andover, providing additional connectivity for residents. Once funding is secured, construction dates will be determined.

Drainage improvements for the detention basins on Sawyer Lane and Scotland Drive are also underway in the area off of Fiske Street. Sediment will be removed and the basins will be rehabilitated, work that is long overdue.

According to Town Engi­neer Kevin Hardiman, at­tention to these drainage basins is now possible due to funding through the stormwater fee so the town may comply with its MS4 stormwater permit. The ba­sin restoration work is expected to be completed this summer.

Further along on Ando­ver Street near the Lowell line, another project will up­grade the traffic intersection at Andover Street and River Road near the Wal­greens pharmacy (formerly Rite Aid). A new traf­fic signal will be in­stalled at the intersection along with creation of dedicated turning lanes.

New and extended vehicle approach lanes will be constructed and the Wal­green's driveway will be realigned to create safer entry and exit to the road. Pedestrian access will be significantly improved through newly created sidewalks and the corresponding installation of ADA compliant ramps.

The project calls for new bicycle lanes, new signage and pavement markings, granite curbing, new drain­age structures and piping, and repaving of the roadway, according to the Tewks­bury Engineering Division’s website. The intersection work is being managed by MassDOT and is being funded through the state’s Transportation Improve­ment Program. Work is underway, and is expected to be completed next construction season.

Other work in the design phase includes the replace­ment of the culvert on Pringle Street over Collins Brook. The old metal culvert, which is rusting and failing, will be replaced so that maximum upstream water may flow and not contribute to flooding events.

The construction work for this project is expected to be undertaken in July 2022. An additional culvert project at Bayberry Lane will seek to replace four corroded culverts. Due to the size of the culverts, the project is classified as small bridge work, and as such, qualifies for Massa­chusetts’ Municipal Small Bridge Work, for which Tewksbury received a grant.

Town staff is also pursuing additional qualifying grants for this work, which is in the design and permitting phase. Anticipated construction for this project is expected to start in spring of 2022.