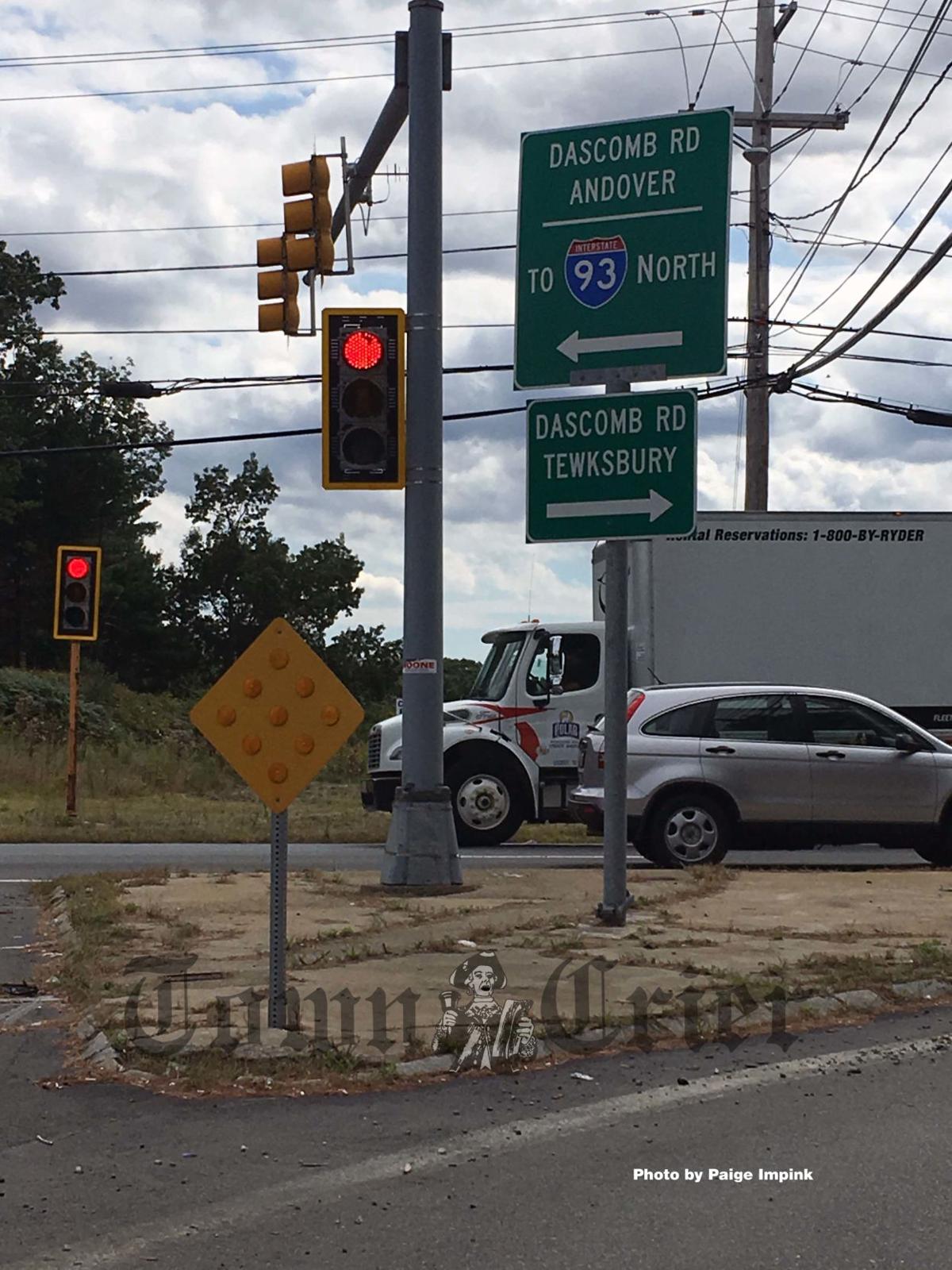 Approximately 13,000 additional car trips per day are estimated to be generated by the lifestyle concept development if approved. 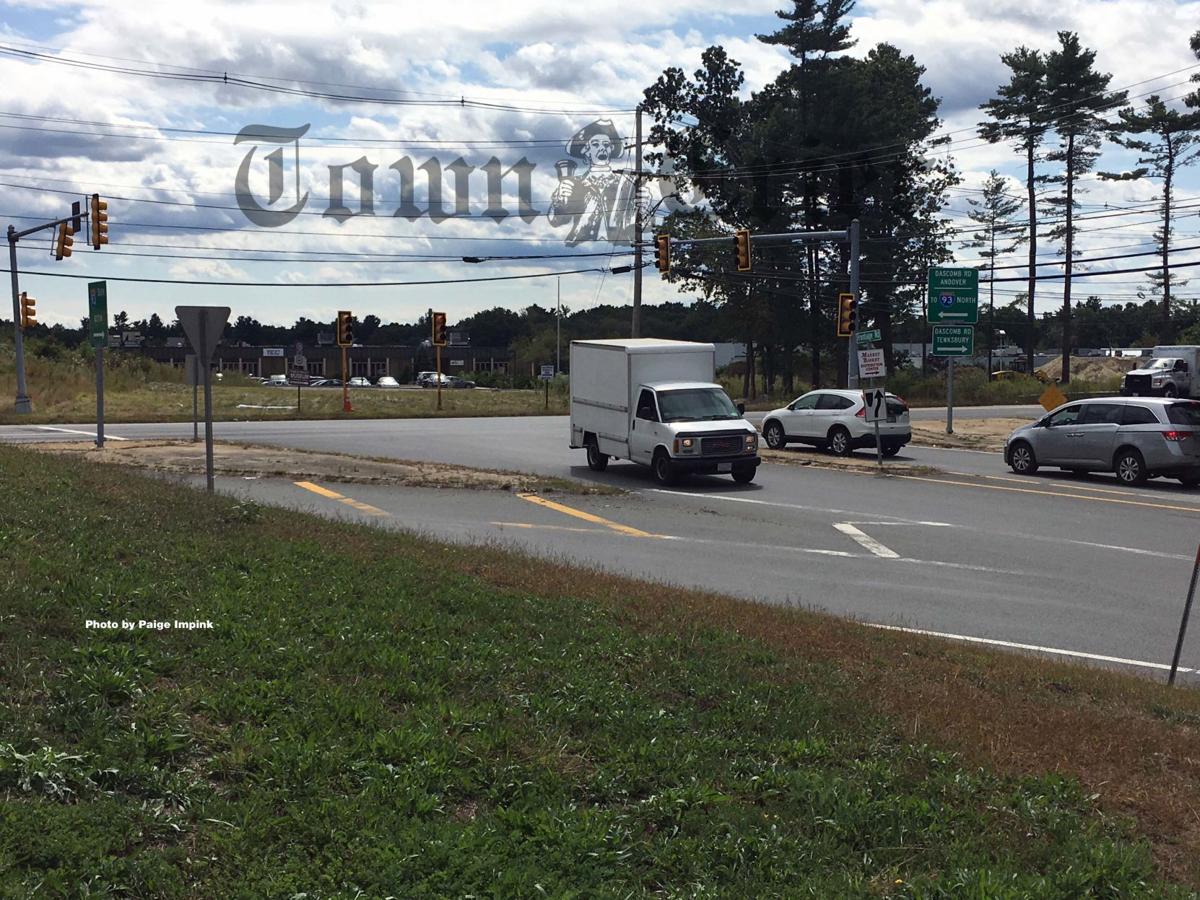 A picture of the intersection at Frontage and Dascomb roads. The entire area would be redesigned to accompany a 16.2 acre lifestyle development on the parcel pictured straight ahead should a MassWorks grant be approved by the state for Andover. The intersection already has a level of F service rating by MassDOT. (Paige Impink photo)

Approximately 13,000 additional car trips per day are estimated to be generated by the lifestyle concept development if approved.

A picture of the intersection at Frontage and Dascomb roads. The entire area would be redesigned to accompany a 16.2 acre lifestyle development on the parcel pictured straight ahead should a MassWorks grant be approved by the state for Andover. The intersection already has a level of F service rating by MassDOT. (Paige Impink photo)

ANDOVER — On Tuesday, Sept. 3, the An­dover Planning Board approved the special permit for the project at 146 Dascomb Road, a proposed 16.2 acre development which, ac­cording to plan documents, is slated for a grocery store, hotel, office space, retail and dining, supported by surface and garage parking for over 1,700 cars.

The Planning Board itself has asked questions and requested more information from the proponent, the Lupoli Companies and their civil engineering firm TEC. Traffic, noise, light pollution, economic impact, signage, and water and sewer connections have all been discussed. As the project sits on the border of Tewksbury, Tewksbury’s management team has been active from the beginning, appearing at several public hearings and sending multiple letters to the Andover Planning Board and to the Andover Board of Selectmen outlining their concerns.

The project’s proximity to a major gateway for the Town of Tewksbury has implications for significant traffic impacts for residents. Ad­ditionally, Tewksbury is seeking a truck exclusion from Andover, a measure that would alleviate heavy truck traffic from 6 p.m. to 6 a.m. for residents on East Street, a request that has been sought multiple times since 2016, well in advance of the 146 Dascomb Road project.

Chief among the issues for Tewksbury is the safety of its residents and the increas­ed vehicular traffic that the proposed development would bring to the East and Shaw­sheen Street corridors. Two at-grade railroad crossings already cause extensive traffic backups, and the development’s projected 13,000 vehicle trips per day, according the proponent’s civil engineer’s estimate, isn’t necessarily going to mean delays in and out of Tewksbury at an already congested interchange.

The development parcel is located at 146 Dascomb Road, a MassDOT level of service F rated intersection at the confluence of Dascomb, Frontage Road, and the Route 93 north and southbound on and off ramps.

The Andover Planning Board, in its approval, set out 37 conditions, two of which addressed Tewks­bury’s concerns at a high level. The board included a requirement for a survey of Shawsheen Street to Vale Street and from Jill’s Way to Leston, in order to determine feasibility of sidewalks, however, the language does not compel the proponent to then build sidewalks.

The board also included a requirement for monitoring of wear and tear of the at-grade rail crossings to see if the increased traffic causes degradation of the roadway, though no remediation was specified.

Approval of the project by the Andover Planning Board now allows the town to communicate with the state. The Town of Andover is seeking a MassWorks grant of approximately $6 million dollars to fund infrastructure upgrades to the entire area; widening the off ramps, adding traffic signals to the off ramps, adding a traffic signal at Smith Way and Dascomb Road, and upgrading the signal at Dascomb and Front­age.

So-called “traffic calming” measures were presented by the proponent for some two miles into Andover along Das­comb Road, including the intersection of Lovejoy, Ban­nister, and Andover Streets, such as illuminated crosswalk signs, shared bike arrow (sharrows) markings, and an extended left turn lane on to Lovejoy.

The project will require additional agency filings and approvals with and from MassDOT, the Federal High­way Administration, the Andover Conservation Com­mission, MEPA and the US EPA, among others. Addi­tionally, should the infrastructure improvements be approved by the state, ap­provals at each phase of the project would need to be conducted as each new buil­ding is constructed, per the Andover Planning Board.

As of this writing, Tewks­bury has not received any communication from the proponent, nor its representative, about the project.

this is good https://luckypennsylvania.com do you know