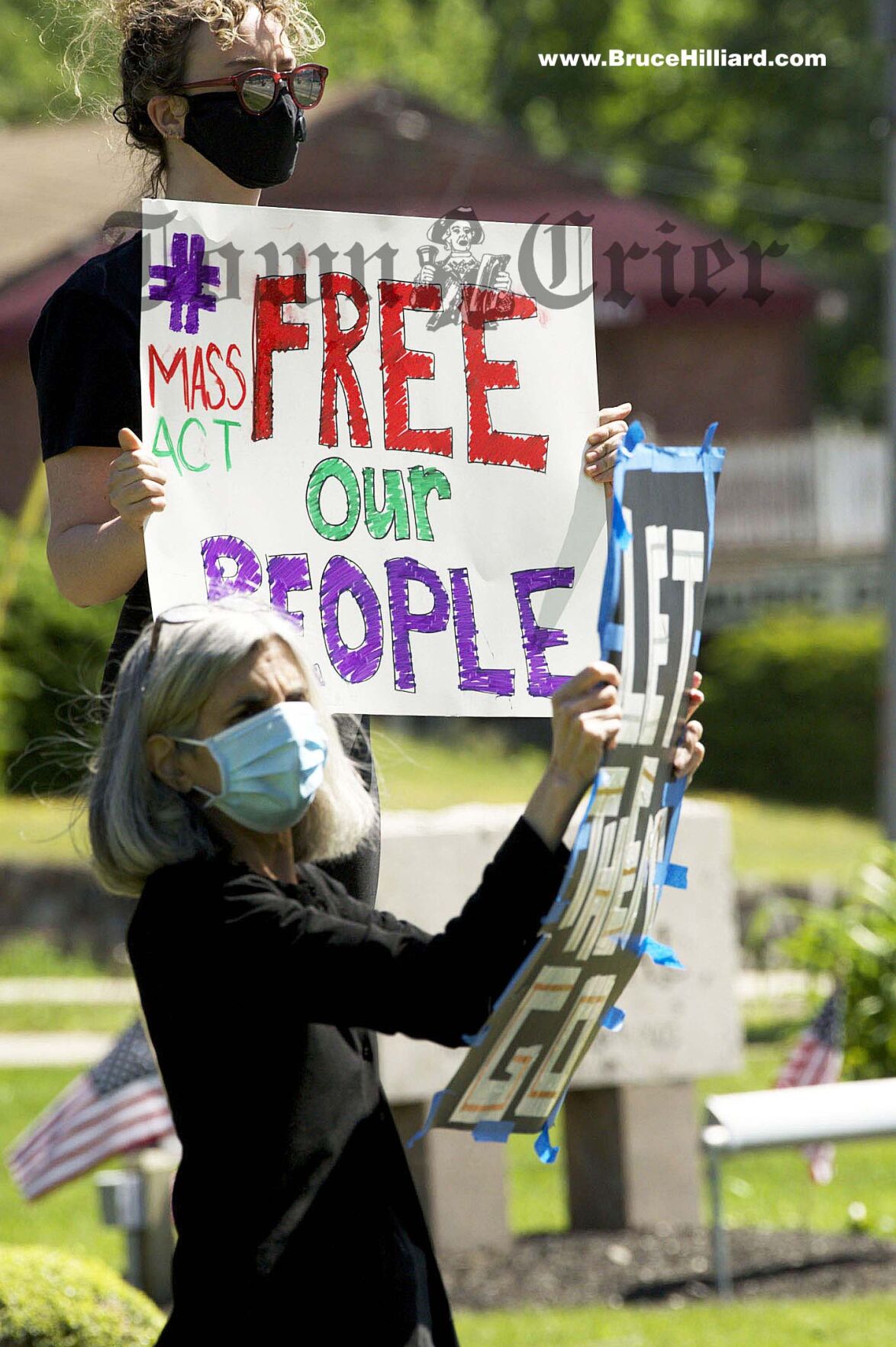 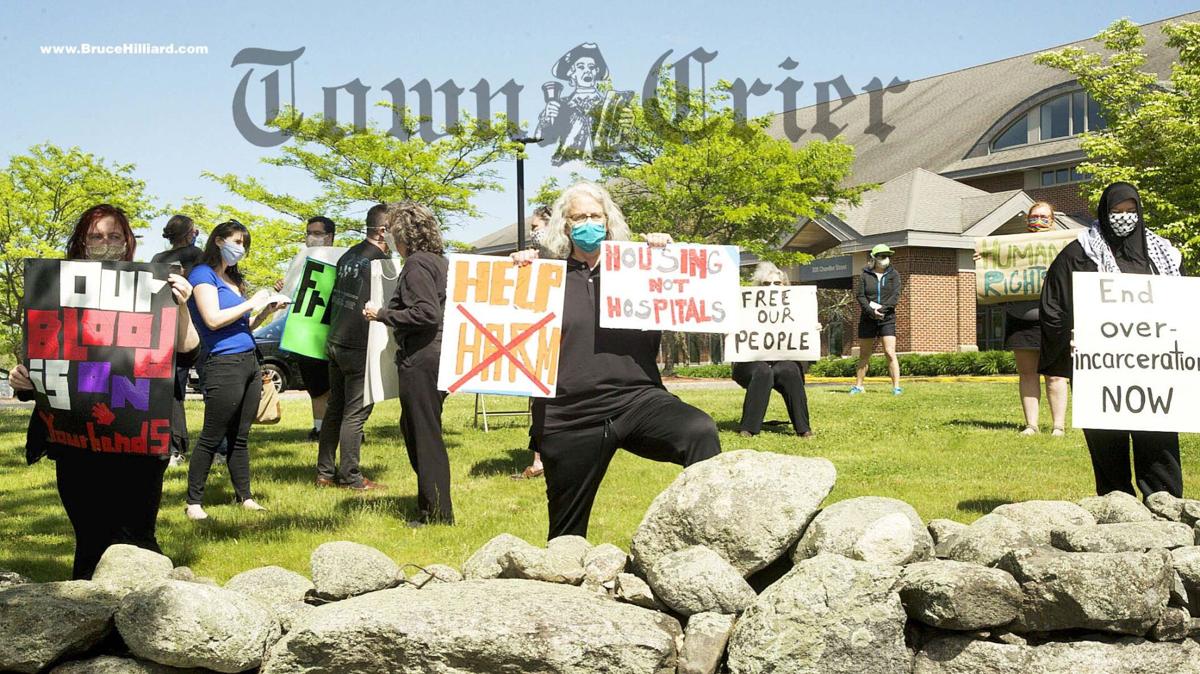 Protest at Tewksbury State Hospital to demand transparency from the Department of Mental Health and the Executive Office of Health and Human Services on the conditions in psychiatric facilities across the state. (photo: BruceHilliard.com)

Protest at Tewksbury State Hospital to demand transparency from the Department of Mental Health and the Executive Office of Health and Human Services on the conditions in psychiatric facilities across the state. (photo: BruceHilliard.com)

TEWKSBURY — 30 people from Mass Ad­vocating for Change To­gether came out on Sun­day afternoon to protest discrimination against people with psychiatric diagnoses and lack of transparency from the Massachusetts Depart­ment of Health and the Executive Officer of Health and Human Ser­vices related to state-run psychiatric facilities like the Tewksbury State Hos­pital.

The protest was held by caravan and in person under social distancing guidelines as close to the hospital as security al­lowed them.

Mass Advocating for Change Together (or Mass ACT) was formed during the pandemic to advocate for fair treatment for those who are most vulnerable to being treated as disposable, ac­cording to the flier they handed out at the pro­test. It’s made up either of those who have personally been held in psychiatric facilities or have come alongside those who have in order to fight for their human rights.

The first protest Mass ACT participated in was held at the Shattuck Hos­pital in Jamaica Plain only two weeks earlier. This hospital along with Tewksbury State and Vi­bra hospitals are the psychiatric facilities with the highest known rates of coronavirus transmission in the State of Mas­sachusetts, the flier reads.

While the high transmission of COVID-19 has highlighted the issues for protestors, it is not the only issue that Mass ACT finds with the Depart­ment of Mental Health.

In light of coronavirus restrictions, the members of Mass ACT say they’ve seen a lack of urgency in the response and action plan on the part of the Department of Mental Health. While the DMH claims the discharge rate from psychiatric facilities is the same now as it was be­fore the pandemic started, they’re not seeing any patients being re­leased.

Instead, patients who are deemed discharge-ready are not being discharged and, those inside the hospital say, not al­lowed to even go outside. Some folks involved with Mass ACT know someone personally who’s stuck in the Tewksbury State Hos­pital or another facility, while others have been reaching out to patients via social media.

Mass ACT maintains that the Department of Mental Health has been withholding of the transmission rate and treatment for COVID-19 in these state-run facilities.

“They’re no longer able to uphold the care that they are trusted to give,” said Sera Davidow, who protested as part of Mass ACT and the Western Mass Recovery Learning Community.

Several protestors mentioned the fact that Tewksbury State Hospi­tal still keeps as many as five people in the same room together. Another of the main Mass ACT or­ganizers, Thomas Brown, shared that patients in­side the hospital have expressed fear that they’ll die inside of coronavirus before they can get discharged.

In fact, Mass ACT be­lieves that an extra mea­sure of degree is considered during this time that wasn’t used before.

“COVID is being used as a barrier,” Davidow ex­­plained.

This means that the hospital considers whe­ther someone is good about wearing a mask and following social distancing guidelines — which, Davidow points out, is not something that the general public is measured by.

One of the demands of the protest is to see pa­tients who are safe re­leased into the community, possibly by re-evaluating each patient for readiness and willingness.

“We’re not asking for chaos, that everyone be released, but that it be done thoughtfully,” David­ow continued.

This requires that hospital administrators, clinicians, and mental health peer specialists work to­gether to make a plan to get their patients into the least restrictive environment.

Mass ACT’s protestors reasoned that if Massa­chusetts can see fit to re­lease 1,000 prisoners into the community, there should be similar efforts to release these psychiatric patients. The state would provide funding and places within the community for patients who can’t return to their families.

Martha Barbone added that not having a place to send patients isn’t a reason for them to be barred from discharge; it’s on the state to supply funding to find housing, possibly with apartment vouchers, hotel rooms, or connection with community mental health services to find more op­tions.

Thomas Brown shared that it costs about $668/night to house someone in a state psychiatric hospital overnight, which is likely more expensive than housing them elsewhere.

While the protestors met in the Tewksbury Public Li­brary to prepare their cars for the caravan, they were disappointed to discover that they wouldn’t be allowed onto Tewksbury State Hospital property at all as they had originally planned.

“The patients who might be inspired at seeing us aren’t afforded that opportunity,” one protestor, Lau­ren Omartian, expressed.

Despite this small setback, several protestors were encouraged by the op­position. They were dressed in black to drive around town with black triangles on their cars to reclaim a mark used in World War II by the Nazis to mark the “mentally de­ficient” as a signal of pride and strength.

It was Sergeant Detective Brian Farnham of the Tewksbury Police Depart­ment who reached out to Brown to inform him that the security police at the hospital didn’t want the protestors on the property.

“He made sure we were safe and kept out of problems with the town and the police,” Brown informed the Town Crier. “Farnham asked permission for us to organize at the library.”

There were Tewksbury and State Police present to block off the property line between the library and the hospital there on Sun­day.

As they fight for more discharging and releasing of patients, Mass ACT is sure there are people rea­dy for discharge currently housed in the Tewksbury State Hospital.

Brown said, “One person in the hospital who I’m in contact with admitted him­self because of a heart condition and has been kept in the hospital for over 14 months after being treated.”

He believes that state hos­pitals tend to over-in­carcerate people as emotional stress is over-interpreted. Mass ACT remains committed to seeing pa­tients released by the De­partment of Health along with transparency in trans­mission rates, deaths, and plans for correction in these state-run psychiatric units.