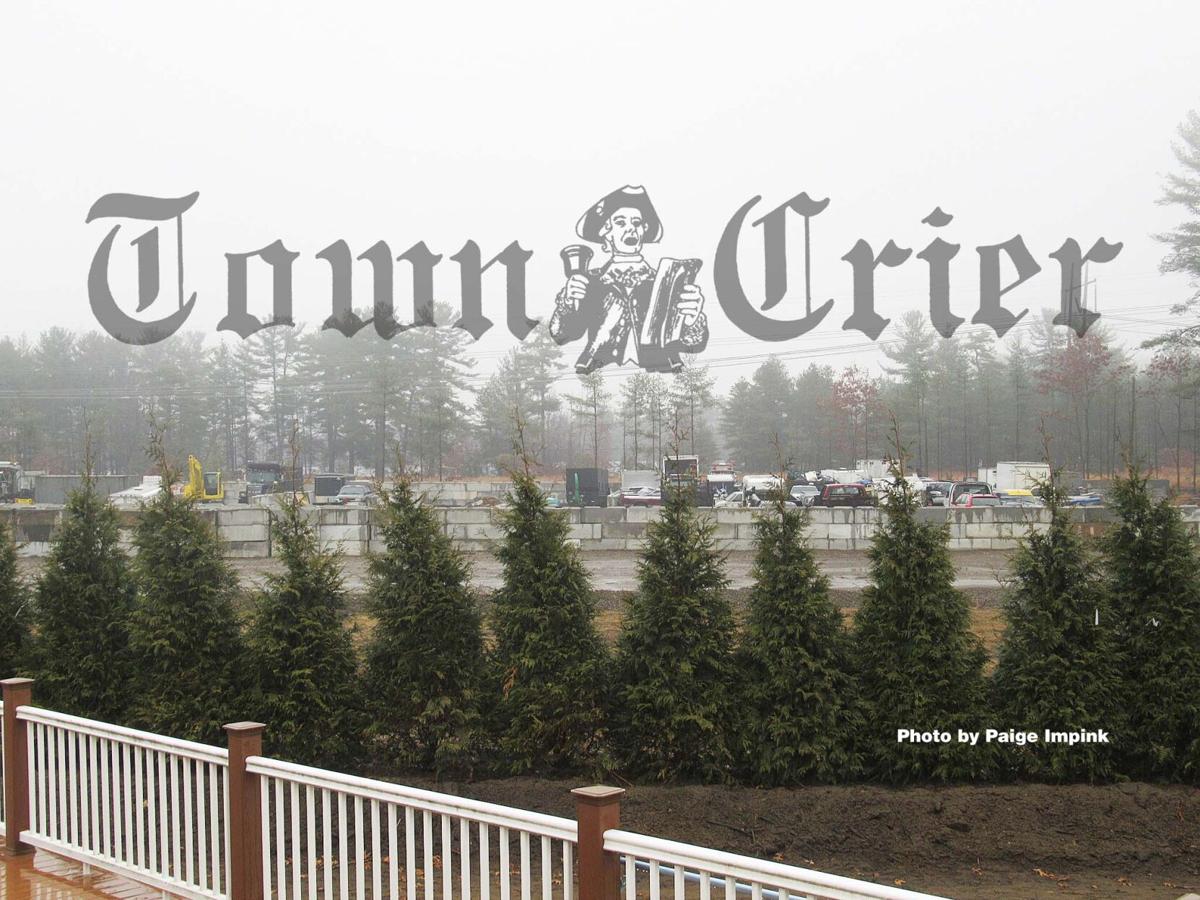 The view from an abutter’s deck onto the property at 1323 South St. The land was cleared of all trees and vegetation without notification to abutters or proper permits from Andover. The property, zoned commercial, is in Andover. Fieldstone Circle residents now can see and hear out to route 93, are affected by daily operations, and have raised environmental impact issues. (Paige Impink photo) 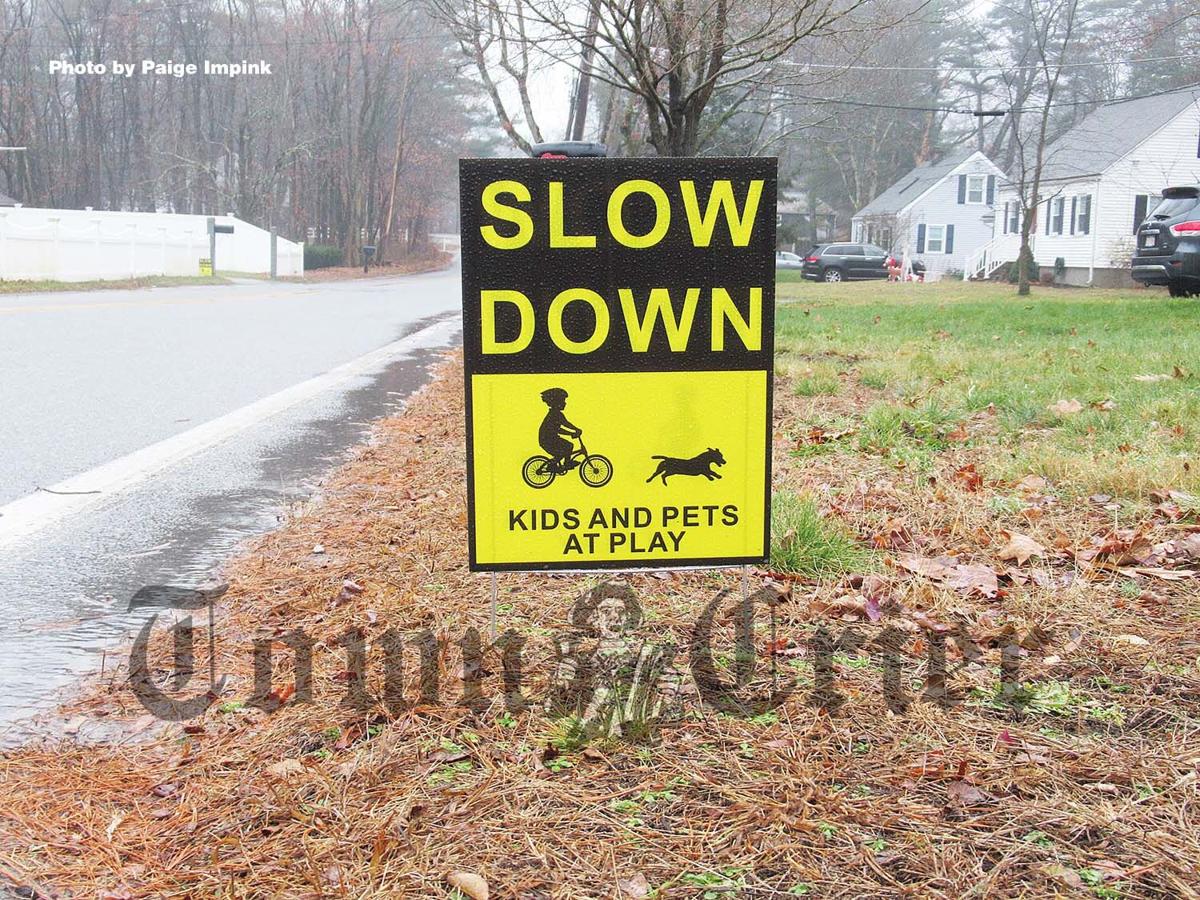 One of the row of signs on South Street placed by neighbors concerned about the truck traffic to and from the unpermitted contractor yard at 1323 South St. The property, which resides in Andover, is only accessible via South Street in Tewksbury. (Paige Impink photo)

The view from an abutter’s deck onto the property at 1323 South St. The land was cleared of all trees and vegetation without notification to abutters or proper permits from Andover. The property, zoned commercial, is in Andover. Fieldstone Circle residents now can see and hear out to route 93, are affected by daily operations, and have raised environmental impact issues. (Paige Impink photo)

One of the row of signs on South Street placed by neighbors concerned about the truck traffic to and from the unpermitted contractor yard at 1323 South St. The property, which resides in Andover, is only accessible via South Street in Tewksbury. (Paige Impink photo)

TEWKSBURY — Resi­dents of the South Street and Fieldstone Circle neighborhoods have been angered by the removal of an estimated 3+ acres of trees and the construction of a contractor yard in an abutting lot, causing, as residents contend, impact to their homes and safety.

Bertonassi investigated the matter based on nu­mer­ous Tewksbury resident complaints. The pro­perty is divided into corrals by large concrete blocks, with commercial trucks, piles of dirt, and junked cars in spots. While zoned industrial, the lot is not permitted for such use under Andover’s zoning code.

On Oct. 1, 2021, Andover Building Commissioner Christopher Clemente is­sued the order, advising Strong of the violation and requesting that “all equipment, vehicles, construction and earth materials forthwith” be removed.

Strong appealed to the Andover Zoning Board of Appeals on Thursday, Dec. 2 as a party aggrieved. The public hearing was held at Andover’s Memorial Hall Library and members of Tewksbury’s Select Board, legislative delegation, and numerous residents were present.

Strong’s attorney asked the board for a special permit, stating that Strong has been a landscaper for 25 years and did not know that the property was of a different industrial use classification than another lot he owns on Tewksbury Street in Andover.

Caruso acknowledged that Strong did not seek the proper permits to remove the trees and set the yard up. Strong leases space to other contractors, some of whom are Tewksbury residents. Caruso pointed out other businesses further away from the site such as Krochmal Farm, BMC, and Action Games as in­dustrial uses are already bringing traffic and noise to the area. [Author’s note: the driveway for those businesses is over a half mile prior to 1323 South St.]

While Caruso said the yard is a “passive use,” re­sidents described large trucks and activity at all hours of the day and night, and the devastation they have witnessed to the tall stand of trees.

Resident Dina Castiglia has been active on social media and was at the meeting. According to Cas­tiglia, who lives on abutting Fieldstone Circle, there is now no buffer from the once completely wooded lot.

In addition, animals, now displaced, have found their way into the Fieldstone neighborhood, according to Castiglia. Strong recently placed a line of arborvitaes along the property. Castiglia brought video to show the board of before and after conditions of the tree removal.

ZBA chair Elizabeth Olt­man asked if the yard was clear cut recently and constructed. Strong purchased the lot two years ago and said he started clearing piecemeal, though residents dispute that and say clearing has happened very recently.

ZBA members asked why Strong had not come to the board prior to the complaints, and asked if An­dover ConCom and AVIS (Andover Village Improve­ment Society) had concerns about run off. Caruso said he has not heard from these groups and that Strong is “in touch with them all the time,” but would address any issues if they were raised.

Clemente was not aware of what was going on at the site until complaints were received, according to his statements at the public hearing.

Representative David Ro­bertson spoke and said he wanted to recharacterize the area from what Caruso described. Robertson said this development “flies in the face” of fitting with how the area is trying to transition away from the industrial use there.

“I am asking you as neighbors to hear us, this does not fit with the long-term plan.”

Tewksbury Select Board Vice Chair Jayne Wellman rose to speak, and took ex­ception with Caruso’s de­scription of the neighborhood as well, calling it a “gross and outdated characterization.”

Wellman was grateful for Andover’s cooperation in this matter and was concerned about Strong’s lack of adherence to the cease-and-desist order. Tewks­bury Select Board Chair Jay Kelly also spoke to the letter which was put forth to the Town of Andover by the Town of Tewksbury, re­ferencing a nine-point or­der of conditions request, the result of an interdepartmental meeting be­tween Tewksbury and An­do­ver, drafted by Assistant Town Manager Steve Sad­wick.

In part, the conditions include maintenance of se­curity cameras and motion sensor lights, no work on site such as loam screening, hours of operation should comply with Tewks­bury’s noise bylaw Mon­day-Saturday 7 a.m. - 7 p.m., signage to say “thickly settled residential neighborhood-25 MPH speed limit,” no abandoned vehicles, salt storage or scrap metal on site, communication with the Tewksbury Fire Depart­ment of any filings of flammable material permits, no habitation on the site in addition to the existing single-family residence, and any road debris that is the result of the vehicles entering/exiting the property will be the re­sponsibility of the owner to clean up.

The Andover ZBA, along with Tewksbury officials and residents, attended a site walk of the property on Saturday, Dec. 11. A follow up hearing is scheduled for Thursday, Jan. 6, 2022.

Wellman said, “I’m en­couraged by the time the Andover ZBA dedicated to listening to the many Tewksbury residents who attended last week’s meeting, as well as their posture regarding a thorough review of the situation.”

However, Wellman added, “Asking for forgiveness ra­ther than permission is a poor way to conduct business and puts undo pressure on the homeowners.”

The public hearing may be viewed on Andovertv.org.