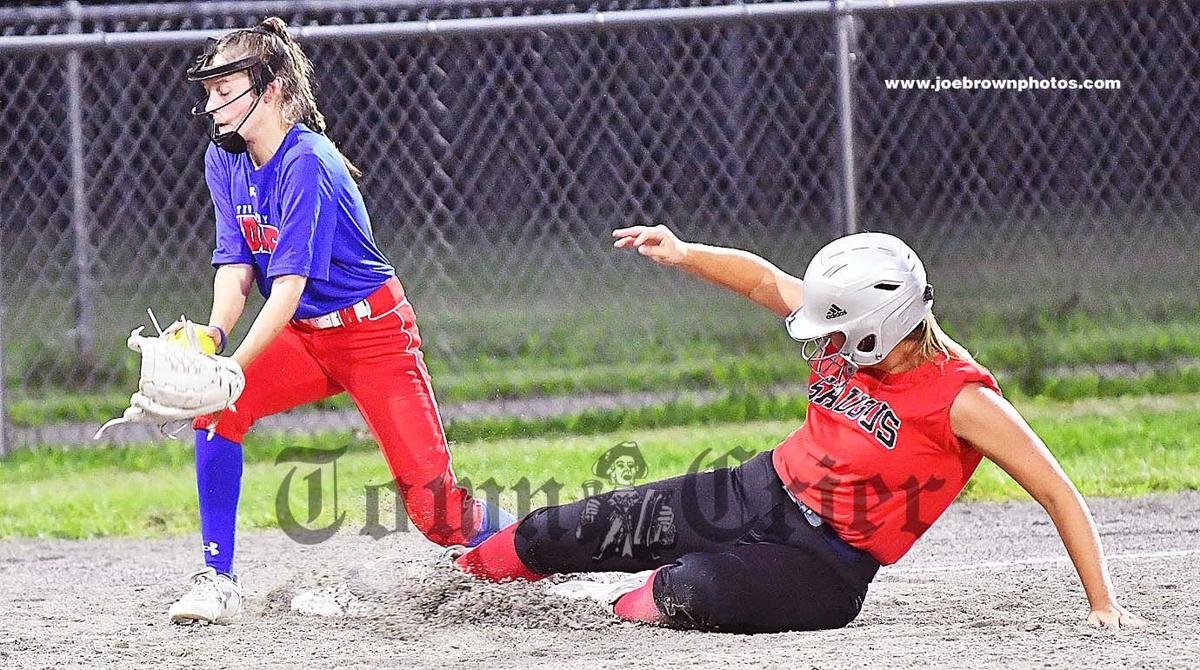 Tewksbury third baseman Brianna Inadoli keeps the ball in front of her as a Saugus player slides into third safely during a recent game held at Hazel Field.     (photo by JoeBrownphotos.com). 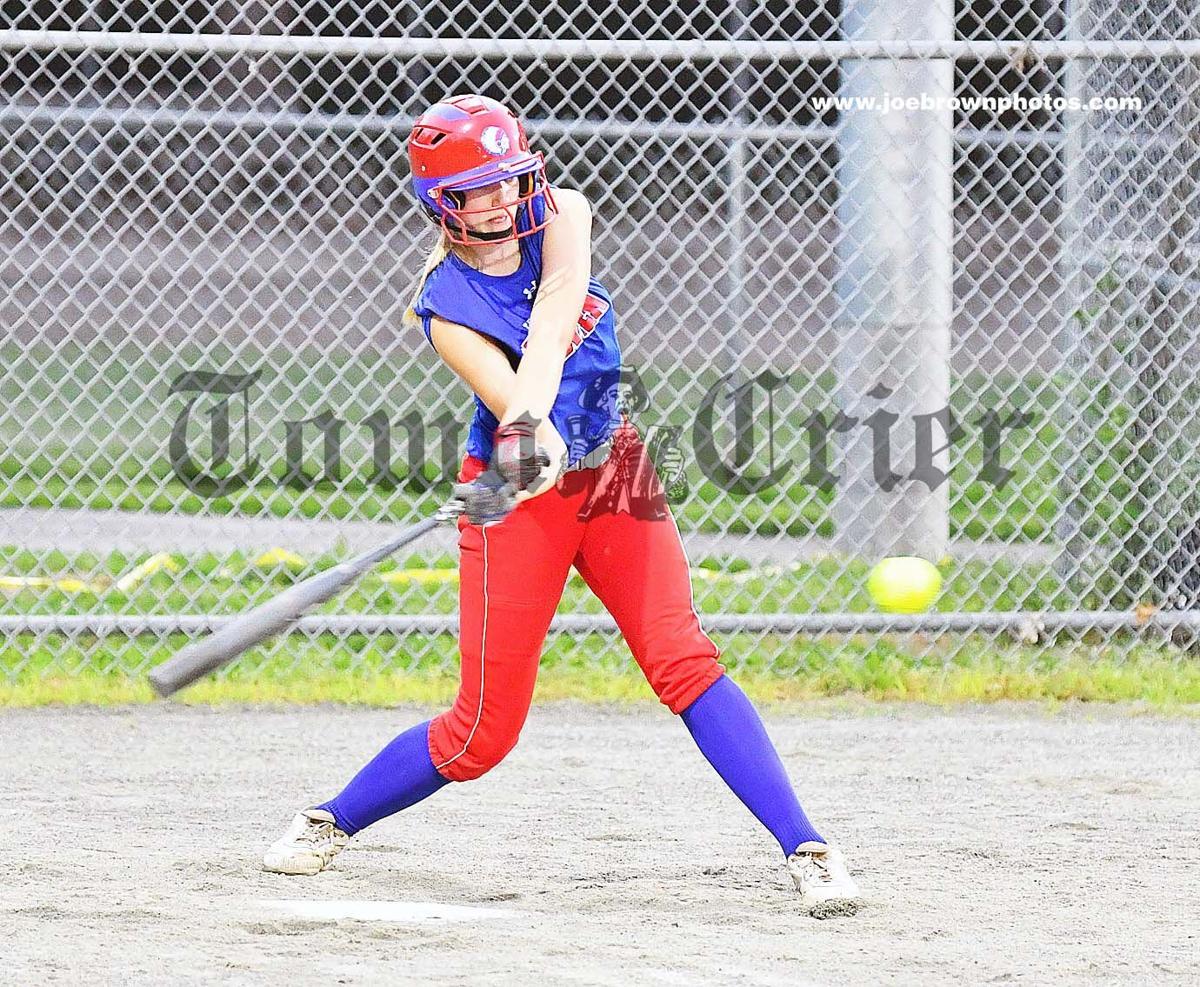 Tewksbury's Madi­son Stovesand of the summer softball team takes a cut and makes contact to belt out a single during a recent home game played against Saugus.  (photo by JoeBrownphotos.com).

Tewksbury third baseman Brianna Inadoli keeps the ball in front of her as a Saugus player slides into third safely during a recent game held at Hazel Field.     (photo by JoeBrownphotos.com).

Tewksbury's Madi­son Stovesand of the summer softball team takes a cut and makes contact to belt out a single during a recent home game played against Saugus.  (photo by JoeBrownphotos.com).

TEWKSBURY — While many teams in the Mer­rimack Valley Confer­ence are scrambling to figure out what they are going to put out on the diamond when varsity play re­sumes, next spring, having lost their junior and senior classes from the last time they played in 2019, Tewksbury Memo­rial High summer softball coach, Rich Iandoli, has that situation under control for the upcoming edition of the Redmen.

Incoming freshman Whit­ney Gigante combined with Chloe Burns on a three-hit shutout, as Tewksbury improved to 4-0 with a 16-0 victory over Essex Tech, in Merri­mack Valley Summer Softball action, Monday night at Hazel Field.

Gigante only allowed two hits over five innings, walking one and striking out seven, all of which came in the first four innings.

Along with “new” sophomore (new because of the pandemic) Sam Ryan, Tewksbury is going to have at least two solid arms to work with in 2021.

“We had a good pitching performance from Whit­ney Gigante — two hits in five innings — a solid performance,” said Rich Iandoli. “We had seven girls with multiple hits, so we had a well-balan­ced attack across the board.”

There were 20 girls on last night’s lineup card and Iandoli was pleased to have 19 of them come up to bat.

The Redmen started slow, with one run each in the second and third innings, before breaking the game open with eight runs in the fourth inning. Essex Tech wanted to keep playing so the mer­cy rule was ignored after Tewksbury scored four in the fifth, and the Red­men tacked on two more in the sixth before the teams and umpires de­cided to call it a night.

Perkins scored the first of her two runs in the second. She led off with a double, went to third on a force play at second after Gigante reached on a dropped fly ball, and scored on a wild pitch.

Hawks’ starter Emily Graham hung in there in the third inning, again holding Tewksbury to a single run, this one scor­ed by Brianna Iandoli on a single by Katie Cueva.

The floodgates opened in the top of the third (the Redmen were the away team) when the Redmen scored eight times while sending 13 batters to the plate.

Gigante, who also scor­ed three runs, got it started with a leadoff single, and she was followed with three more consecutive singles from Maddie Cueva, Pendola and Em­ma Giordano, producing the inning’s first two runs to up the lead to 4-0.

Pendola scored on a fielder’s choice grounder by Ashley Giordano, and an Iandoli grounder to second brought home the fourth run of the inning, in the form of Emma Giordano.

Errors and aggressive base running helped bring in a few more runs until it was 10-0 after four in­nings.

“I’m very impressed,” said Rich Iandoli, of the team’s 4-0 start. “It’s a younger team and I’ve coached some of these girls since they were 10 years old. To see them grow into the high school is gratifying to see. We also have Becca Harris coming in as under-classmen, and Sam Perkins coming in as a sophomore, I think (TMHS varsity coach) Coach Sousa has a good roster ahead of her for the coming year. I think they are going to do themselves well in the Merrimack Val­ley, next season.”

Tewksbury won its third game, last Tuesday, against North Reading, 8-4. The game was originally scheduled to be played at North Reading High, but got switched to Hazel Field that afternoon.

The Green Hornets surprised the Redmen by scoring three times in the first inning to take a 3-2. It stayed that way until the top of the fifth when Tewksbury scored four times to take a 6-3 lead.

The Redmen added two more in the top of the seventh to make it 8-3, before the Hornets closed out the scoring with one run in the bottom of the seventh.

Whitney Gigante earn­ed the win on the mound, giving up the four runs on four hits over seven innings, walking one and striking out eight.

The Redmen have a busy week ahead, beginning with a makeup game with Wilmington, Wed­nes­day night (8 p.m.). Tewksbury then hosts Wo­burn back at Hazel, Thursday night at 8 p.m.