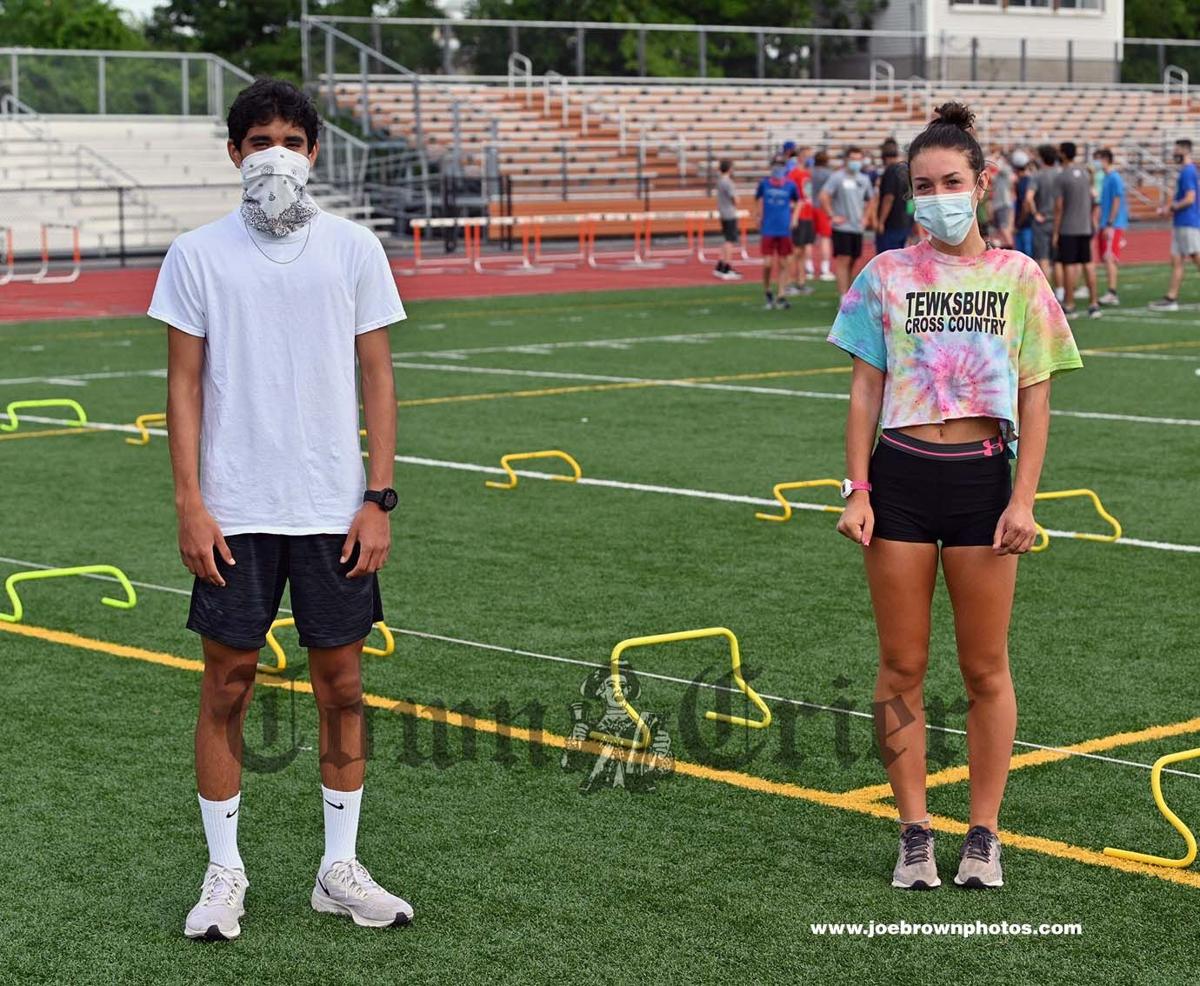 At the Greater Lawrence High School track, some of the athletes participating in the XC Project Camp include Tewksbury residents Nick Alvardo (left) and Maci Chapman. (photo by JoeBrownphotos.com). 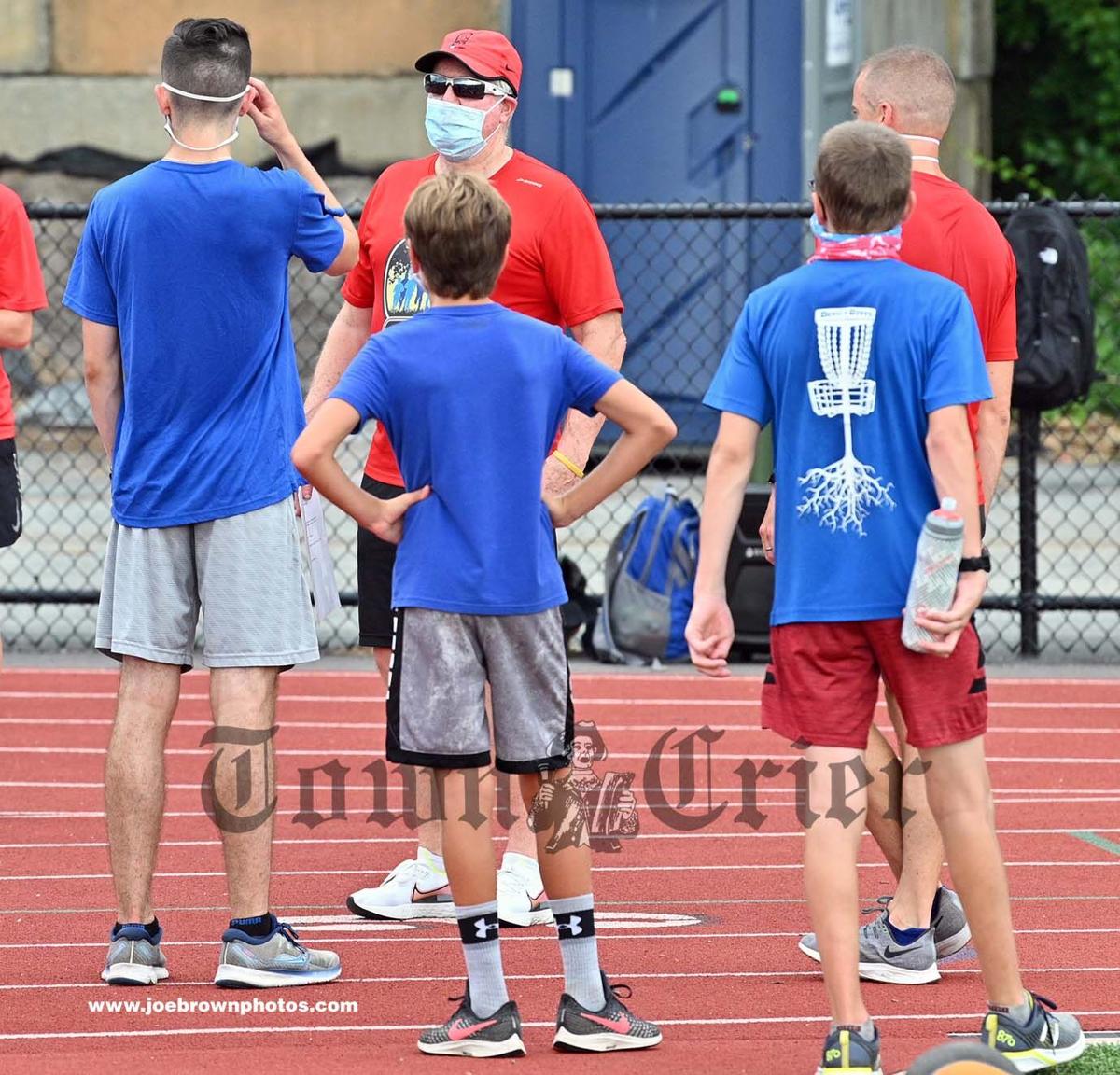 Fred Doyle of Tewksbury instructs some of the athletes during the XC Project Camp. (photo by JoeBrownphotos.com). 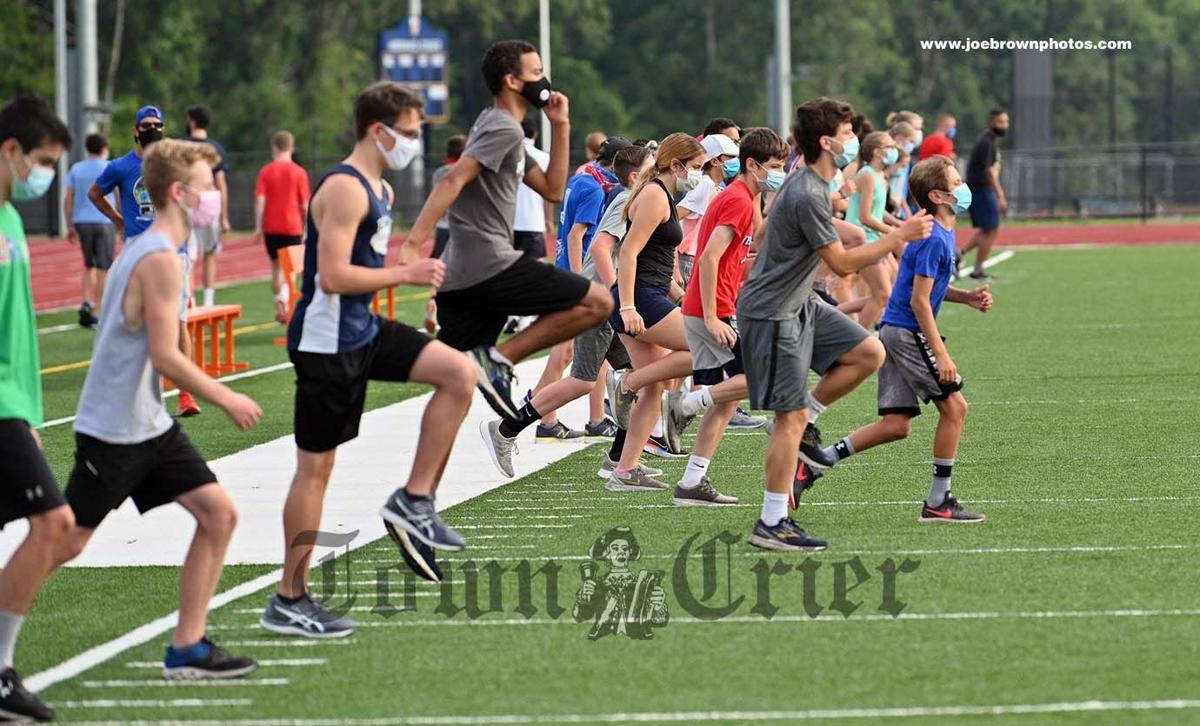 The XC Project Camp, now in its fifth year, is under the direction of Fred Doyle who has an extensive background in the sport. (photo by JoeBrownphotos.com). 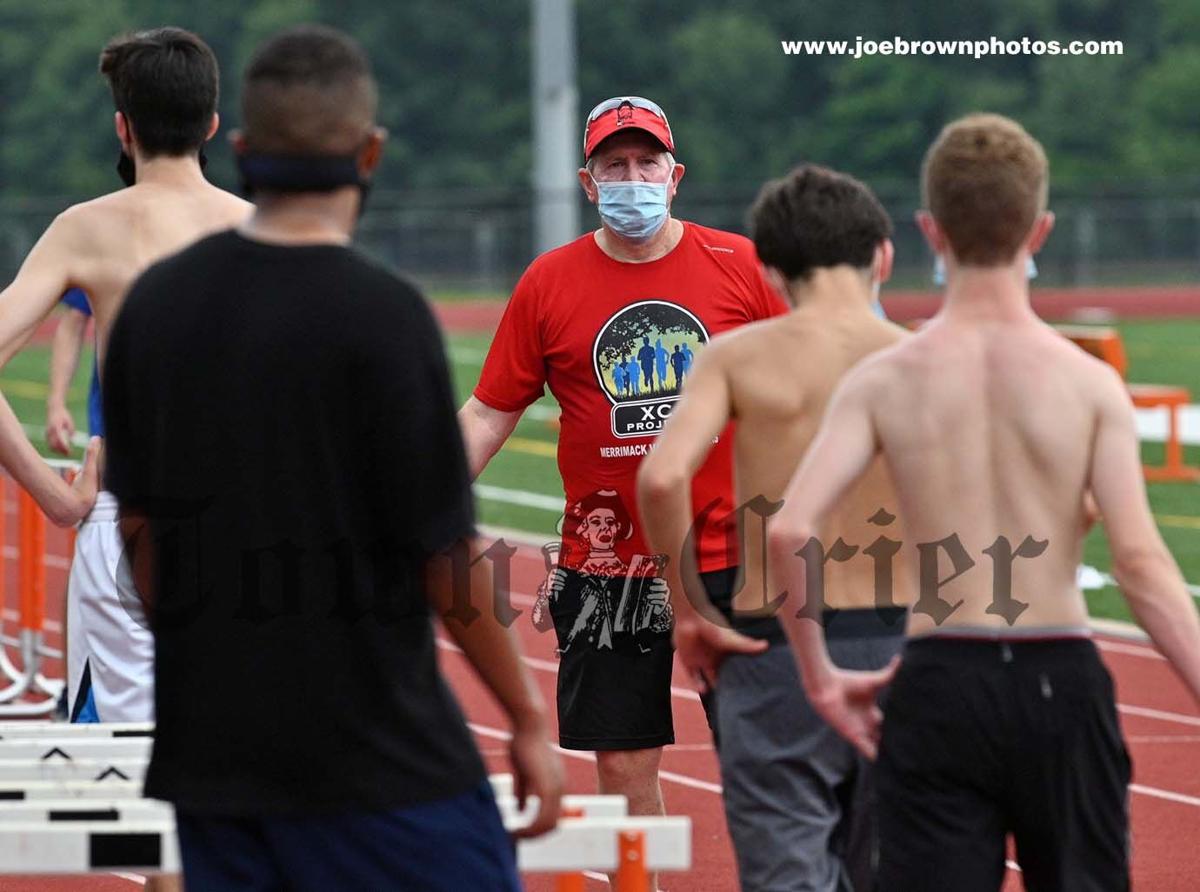 Fred Doyle has an extensive background in the sport, having been a standout runner and longtime coach. He is currently a volunteer with the TMHS Cross-Country program. Here he chats with some of the athletes during a workout before sending them on a running drill. (photo by JoeBrownphotos.com).

At the Greater Lawrence High School track, some of the athletes participating in the XC Project Camp include Tewksbury residents Nick Alvardo (left) and Maci Chapman. (photo by JoeBrownphotos.com).

Fred Doyle of Tewksbury instructs some of the athletes during the XC Project Camp. (photo by JoeBrownphotos.com).

The XC Project Camp, now in its fifth year, is under the direction of Fred Doyle who has an extensive background in the sport. (photo by JoeBrownphotos.com).

Fred Doyle has an extensive background in the sport, having been a standout runner and longtime coach. He is currently a volunteer with the TMHS Cross-Country program. Here he chats with some of the athletes during a workout before sending them on a running drill. (photo by JoeBrownphotos.com).

ANDOVER – Come September, Erica James will (hopefully) be entering her junior year at Salem, New Hampshire High School. A veteran runner on the cross-country and track programs, back in 2018 she finished 59th at the state meet, but had to sit out last year's fall season due to a hip injury, as she suffers from epicondylitis.

In order for her to get back to that standard, she elected to return to the place that helped her get to that level – the XC Project Summer Camp.

"You meet all kinds of new people," said James before Friday morning's session. "There's different activities to do all of the time and you learn something new everyday. You learn about new stretches, new conditioning and new ways to improve."

James is coming off serious injuries to both hips and needs to get back to 100 percent in order to return to Salem's varsity line-up this fall. She has been running a lot lately, and has increased her volume of work now that she’s attending this camp.

"I feel better," she said. "I've been running a lot and have no pain at all."

The camp is in its fifth year. It runs three days a week – Monday, Wednesday and Friday mornings from 8-9:45 – for six weeks, at Greater Lawrence High School in Andover.

According to Doyle and the camp's press release, "The primary goal is to promote the three H’s which each of the athletes in attendance and keep them “Happy, Healthy and Hungry.” The program training philosophy is based upon the five-core training principles of the highly successful University of Oregon – Moderation, Progression, Adaptation, Variation and Callousing.

“The program is designed to prepare the student-athletes to perform at a significantly higher level when their team training commences in late August. The belief is that the program creates stronger, healthier runners making them more efficient and faster.

Doyle has decades of experience in running, and said six years ago, the idea of this camp originated after the end of the TMHS cross-country season coaches meeting.

"The first year I was at Tewksbury helping out, we had a meeting at the end of the season and I said, 'one of the things that we could use is a structured summer program'. The kids all run in the summer but it's not enough just to run in the summer – everybody is doing it," said Doyle. "When I was in high school, the kids who ran in the summer, were the ones who were way ahead of the others. Now, everybody is running in the summer so you have to train better and we wanted to have a comprehensive program. So we saw what some other camps were doing, then we teamed up with the Merrimack Valley Striders and started this camp."

The first year in 2016, the camp had 24 kids and then it went up the following two years with 32 and 41, before dropoing back down to 34 last year. This summer, there's 54 excited middle school and high school kids eager to learn, get better and make some new friends.

"I started coming here two years ago and over the time that I have been here, I have learned that it's not running that makes you a better runner," said Maci Chapman, who was a varsity member of the TMHS cross-country and track programs this past year as a freshman. "Last year I didn't know anyone so I was really quiet, but I learned how to improve my form with running. I tend to tilt my head back when I run which slows me down and I'm still trying to correct that, all while making some new friends."

Doyle was a standout runner at both Lynn English and the University of New Hampshire, before becoming a longtime active member of the Greater Boston Track Club. After he graduated from UNH, he served as a volunteer coach at Winnacunnet High School in New Hampshire, before being asked to join the staff as a paid assistant. He did that for three years before becoming the head cross-country coach at Swampscott High School in 1976. He held that position for eight years and was also the indoor track coach for six years and did outdoor track for one season.

From there he worked for Nike, moved to Oregon and started a family. Then in 2006, he switched jobs and worked for Saucony, and relocated back to Massachusetts, landing in Tewksbury. During his time in Oregon, he spent many years coaching his children in youth sports, basketball, soccer and baseball mostly, but did coach cross-country at St. Pius High School for three years.

"(At the time I started working for Saucony), my two kids were in college in California, my wife was living in a house in Oregon, and I was living with my mother in Danvers. We were all everywhere," said Doyle with a laugh. "We were looking for houses along Route 128 and couldn't find anything, and then we found one in Tewksbury and that was in 2007."

Several years later, he met up with former TMHS cross-country and track coach Peter Molloy, and Doyle joined the staffs as a volunteer assistant. Throughout all of his time in the sport, he picked up on a lot of tips on how to properly coach distance runners. He shares that wealth to the kids in the camp.

"We have different days where we do different things," he said. "Most of these kids need to be faster and need to be stronger. Most of them can do the running, they enjoy the running, but most of them need more strength in their upper body and need more strength in their lower bodies. I hear people say, 'well they are running all of the time, aren't their bodies already getting stronger'? Yeah, the same muscles that they are using repeatedly are getting stronger, but the muscles they are not using are getting weaker and that's where the injuries occur. We target the whole body. We do different stations."

Learning these techniques includes Tewksbury resident Nick Alvarado, who last year as a freshman was also a member of the TMHS cross-country and track teams.

"When I was in the eighth grade there was this transition event where you go to the (high school) and see all of the different things that are offered, and I saw the cross-country program so I signed up for it right away," he said. "I really like running."

Before he started to run competitively at the high school, he got some experience under his belt with the XC Project Camp last summer.

"Last year was about going easier on the shorter runs and then really working hard with the longer workouts and definitely working on hills," he said.

Also back for his third summer is Paul Lovett, who last year was a freshman at St. John's Prep, also running all three seasons. He said that this camp is quite different from what you would expect from 'a running camp'.

"It's not all about running," he said. "It has a lot to do with strength and the bio-mechanics of running. We focus a lot on form and we do a lot of form drills and a lot of injury prevention to make sure we are healthy. I ended up getting hurt as an eighth grader and I here and got healthy and got some strength back and that helped me stay healthy for last year's season."