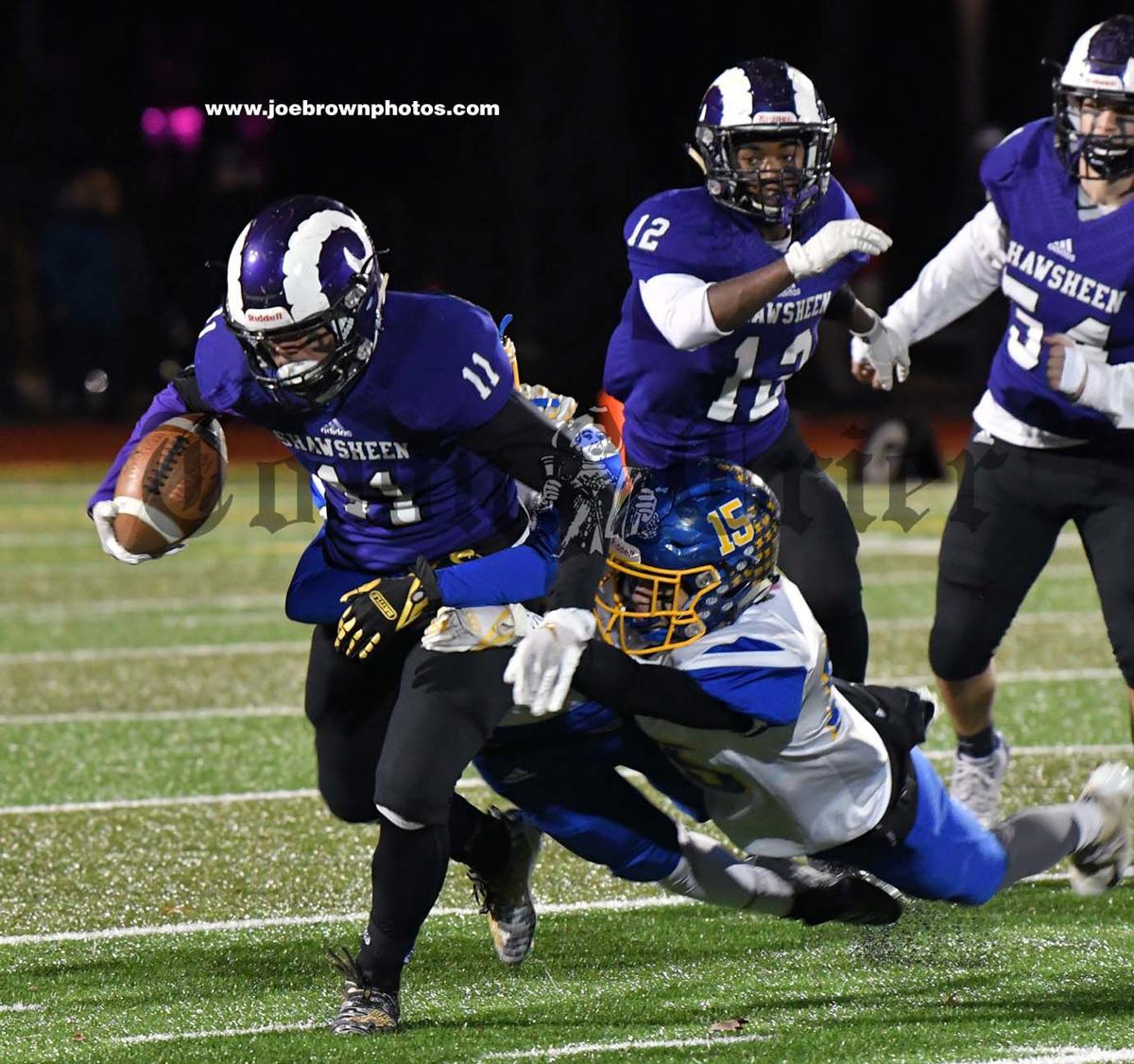 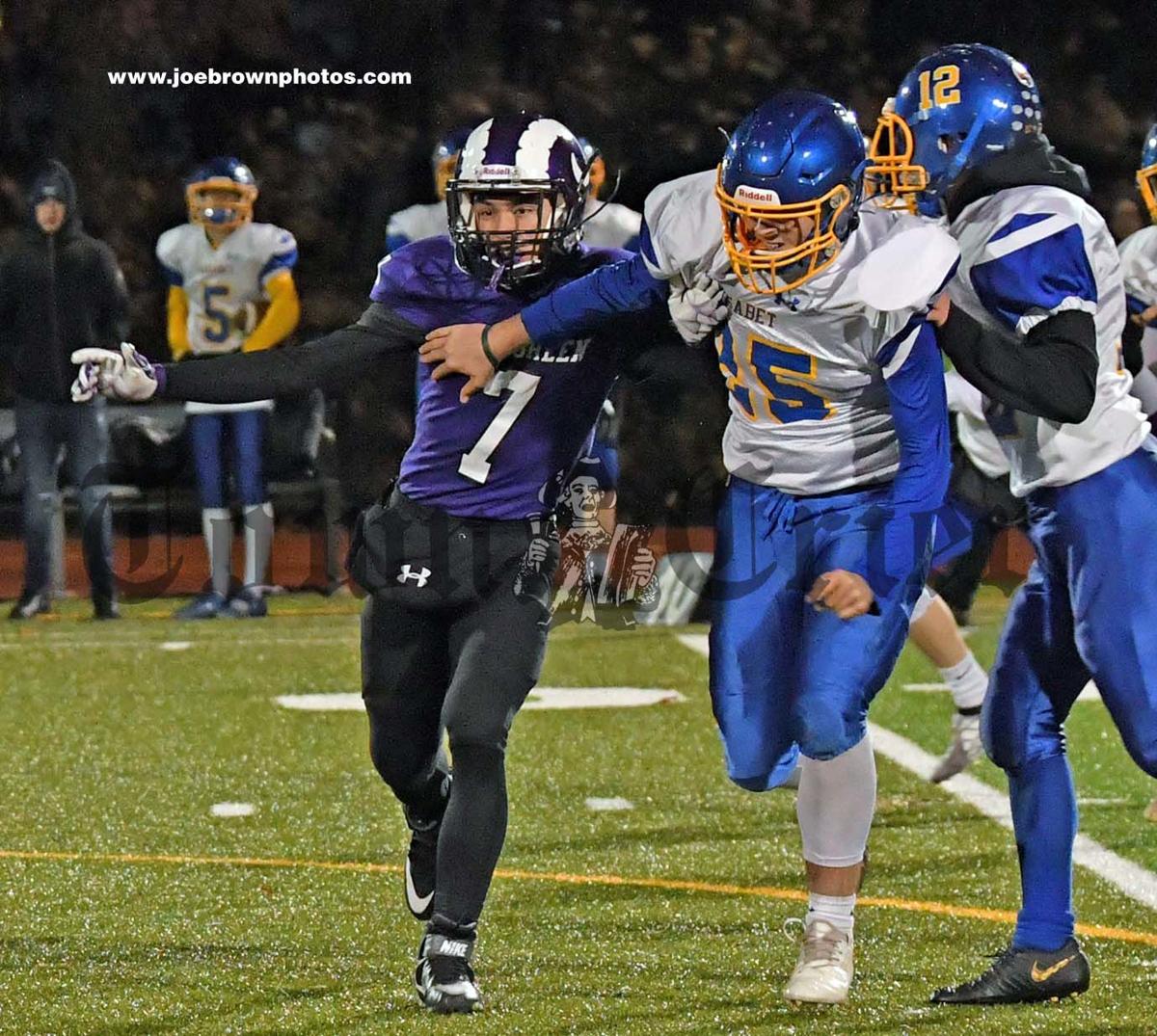 BILLERICA – There aren’t many traditions greater than Thanksgiving Day football in Massachusetts.

It’s been said that you can throw the records out the window because Thanksgiving is basically a one game season in itself.

That certainly was the case for Shawsheen Tech and Arlington Catholic last Thursday morning when the 9-2 Rams and the 2-9 Cougars squared off in their first ever Thanksgiving Day meeting at the Charles H. Lyons Athletic Complex.

The team’s records mattered very little in this contest, with both squads battling for every yard before Shawsheen finally prevailed by a score of 14-8 to give them their first ten win season since the 2010 Super Bowl winning team which won 11 games.

While the Thanksgiving Day meeting was a first for the long time rivals, they were no strangers to each other heading into the game, having faced each other for the past 18 consecutive years, usually in an early September game. Shawsheen coach Al Costabile was not surprised that his team had to work hard to earn the win over the Cougars.

“It was a hard fought win,” Costabile said. “Arlington Catholic came to play. They made it their Super Bowl game, and they played very well. The schools are very familiar with each other and we have a great rivalry, and that really added to the whole Thanksgiving Day experience. We hope this is the start of a great Thanksgiving Day tradition.”

It looked like the Rams were going to start the new tradition with a score on their opening drive of the game, but after an interception by AC’s Jose Davila in the end zone, the Cougars went on a time consuming 94-yard drive, converting four third downs along the way, before Paul Hammond connected with Michael Fogarty for a 33-yard touchdown pass, coupled with a two-point conversion to make the score 8-0 late in the first quarter.

That was how the teams would go to the half as well, as Shawsheen stepped it up defensively, but were unable to get things going on offense. That would soon change, however.

“We had a little trouble getting going offensively in the first half,” Costabile said. “But it was much different in the second half.”

The Rams would finally get on the board late in the third quarter. Following a clutch interception by senior Jake Bonnano, Shawsheen would go on a 56-yard drive for their first score of the game, a ten-yard run by junior Diondre Turner of Wilmington (17 carries, 147 yards) with 1:41 left in the third quarter. The two-point conversion failed however, and the Rams still trailed 8-6 heading into the fourth quarter.

“The offensive line did a great job in the second half, pushing the line of scrimmage and we had a lot of positive gains and really no negative plays, which we had in the first half,” Costabile said. “Actually, I thought both our offensive and defensive lines stepped it up in the second half. We moved the football well and converted some big third downs.”

A fumble recovery by the Rams on the Cougars next possession led to another Shawsheen touchdown, this time with junior quarterback Chris Disciscio (12-for-17, 175 yards, 1 TD, 2 INT’s) connecting with senior wide receiver Conor Rooney of Wilmington for a 22-yard touchdown pass. The duo would also connect for the two-point conversion and the Rams had a 14-8 lead with 9:01 left in the game. A key play on the drive was a great catch by senior wide receiver and captain Anthony D’Ampolo of Tewksbury to give the Rams a first down.

The Shawsheen defense held strong on the next possession, forcing the Cougars to punt, and took over at their own six-yard line with just over six minutes left in the game. From there, the Rams ran out the clock with the combination of Turner and sophomore Dylan Timmons of Wilmington (9 carries, 60 yards) to give the Rams the win.

In addition to the turnovers, defensive tackle Liam Fitzgerald also had a big game with nine tackles to lead the team, while Liam Kelley had a big sack to thwart an Arlington Catholic drive.

Costabile was impressed with the way his team rebounded after a tough start, especially in light of the Rams suffering a tough loss to Assabet Valley in the vocational playoffs last Saturday.

“You do worry about that,” Costabile said. “You lose a playoff game with Assabet where we wish we could have played better, and then we have the tough start, so it was great to see them bounce back the way they did. It took us a while to get going, but we had a great effort in the second half to get the win.”

The win wrapped up a tremendous season for the Rams, who bounced back from last year’s disappointing 4-7 campaign to post the third ten-win season in program history, with the others coming in 2010 and 2007.

And the best news for the Rams is that despite losing some key seniors like D’Ampolo, Rich and Bonnano, along with top wide receiver Josiah Martinez of Wilmington, tight ends Conor Rooney and Santino Garofalo and linebacker Shane Stairs, they will bring back a strong core of returning players next season, including Disciscio, Timmons and Turner.

“We are going to lose a great, great, senior class. They were the ones who wanted to turn it around this year and they did that,” Costabile said. “But we return a good core of players, so I am very excited about that.”