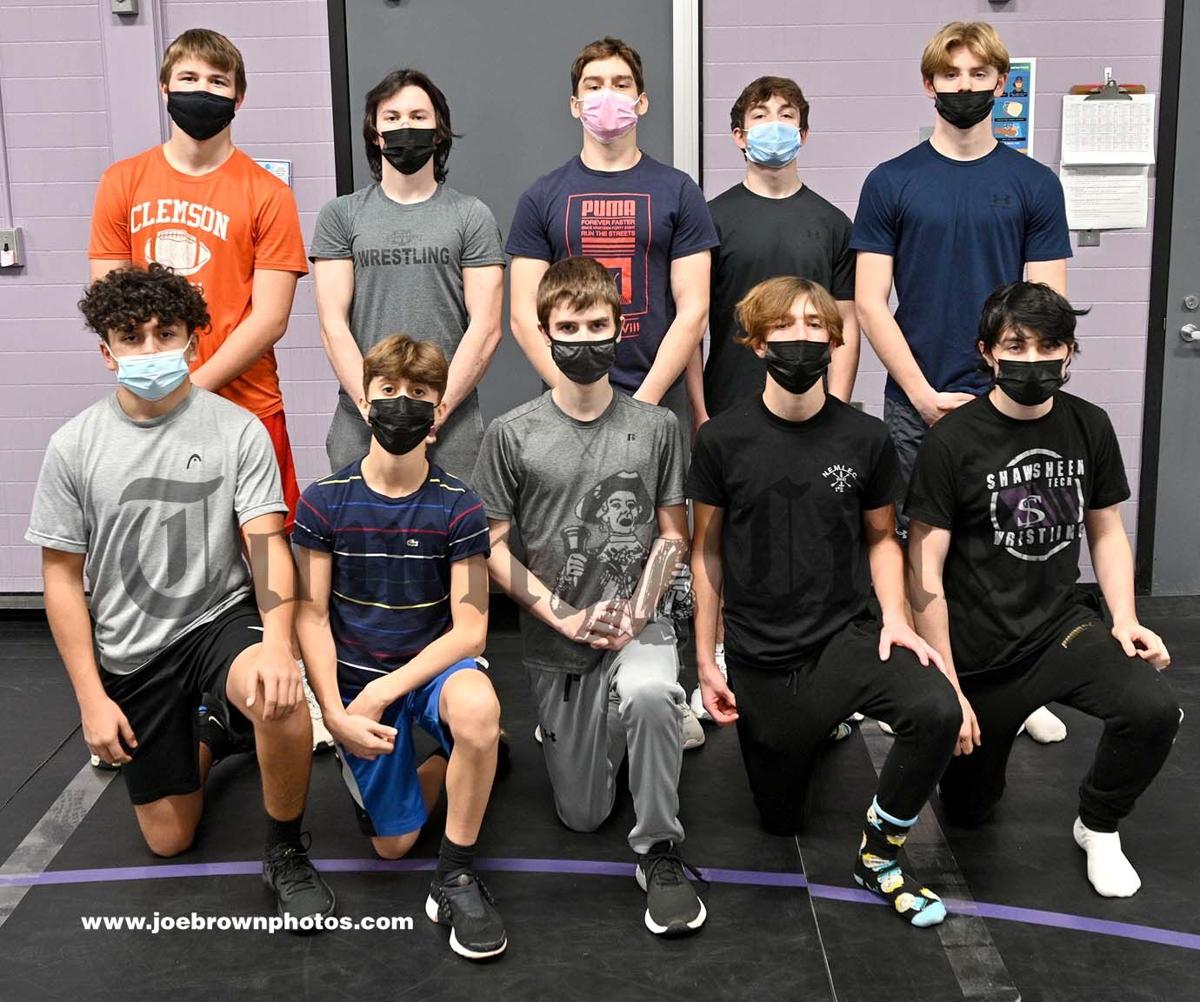 This year’s Shawsheen Tech Wrestling team once again has plenty of locals on the roster including front row from left, Damian Ortiz, Dante Graziano, Tyler Manty, Elijah LeFebvre  and Logan Warwick all of Tewksbury, and back row from left, Cullen Walsh of Wilmington, Troy Warwick, Derek Musgrave, and Jason Scaingi of Tewksbury and Jared Bishop of Wilmington. (photo by JoeBrownphotos.com). 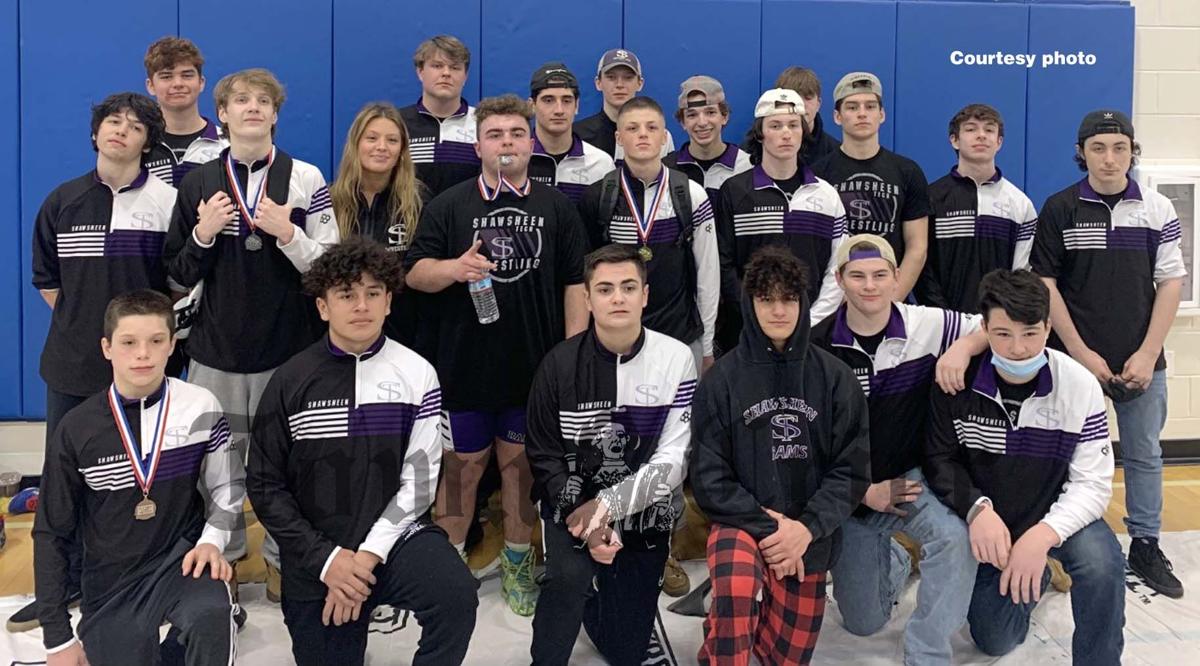 This year’s Shawsheen Tech Wrestling team once again has plenty of locals on the roster including front row from left, Damian Ortiz, Dante Graziano, Tyler Manty, Elijah LeFebvre  and Logan Warwick all of Tewksbury, and back row from left, Cullen Walsh of Wilmington, Troy Warwick, Derek Musgrave, and Jason Scaingi of Tewksbury and Jared Bishop of Wilmington. (photo by JoeBrownphotos.com).

BILLERICA – This season will be a challenging one in many ways for the Shawsheen Tech Wrestling team. First of all, they wrestlers and coaches must deal with the emotions of heading into a season as they continue to mourn the loss of their legendary coach Mark Donovan, who passed away in October after a courageous battle with bile duct cancer. It will be the first time in 36 years that Donovan will not be on the sidelines for the Rams after nearly 600 career wins. 28 Commonwealth Athletic Conference titles and 19 state vocational titles.

Then, of course there is the challenge the Rams will face once they take to the mat as they attempt to win their 15th consecutive CAC title, after winning their 14th straight during last season’s abbreviated “Fall 2” campaign.

The Rams will take on that challenge under the direction under new head coach, and long time Donovan assistant, Doug Pratt. They will also do so with one of the youngest teams they have had in many years, having lost several talented wrestlers to graduation.

The good news for the Rams, however, is that while they are young, the cupboard is certainly not bare, as they bring back several wrestlers who gained valuable experience last season, as well as adding some talent to their roster with wrestlers who had to miss last season due to it being played in the spring, which coincided with sports.

“We lost some kids, but we are getting some kids back who played spring sports and thar will really help us,” Pratt said. “Last season we had to forfeit a weight class in one of our meets, which we had never done in 30 years. That won’t be the case this season. We have a full roster.”

Not only do the Rams have a full roster, but they have a roster full of some talented young wrestlers, ready to make an immediate impact at the high school level.

“It’s always tough to lose kids the way we did, but with what we have coming in, we are hoping we are able to fill in some of those spots pretty quickly,” Pratt said.

While very excited for the new talent coming in, Pratt also knows that it will be some veteran leadership that will one of the biggest keys to the Rams success, led by senior tri-captains Lucien Tremblay at 120 pounds, Sam Palmieri at 126 pounds and Xavier Santiago at 220.

“They are all very good captains and they all bring something different to the role,” Pratt said. “Lucien is a great captain. He is just a great leader for the younger kids. Sam is more of a leader by example. He gets it done in the room. Xavier is a really good mix of both. He is a little more vocal than Sam, but mostly leads by example. It is a really good mix that we have.”

The Rams freshman class should be ready to make an impact almost immediately, starting with Sid Tildsley at 132 pounds. Tildsley, who already had a fine season as quarterback of the Rams Football team this past fall, is off to a fine start to his high school wrestling career as well, having won the 132-pound championship at the Blue Devil Classic in Salem, New Hampshire this past weekend. Pratt expects more of the same throughout the season.

Another pair of young wrestlers, Freshman Brayton Carbone at 113 pounds and sophomore Caleb Caceres at 138 pounds, are both transfers from Billerica High, where they wrestled as eighth graders, with Carbone placing eighth in his section and Caceres placed sixth in his section.

“Brayton brings a lot of experience, even though he is still young, and we are looking for big things from him this season,” Pratt said. “Caleb would have wrestled for us last year, but he is a very good lacrosse player, so he played that in the spring. We are glad to have him with us now. We know what kind of wrestler he is.”

Another freshman, Dante Graziano of Tewksbury will start the Rams off at 106 pounds, while junior Troy Warwick, also of Tewksbury, will return to the team to compete at 145 pounds.

“Dante got some good experience at the youth level so we feel like he can step in and do well,” Pratt said. “Warwick has been in the room for a couple of years, and now he is getting an opportunity to start. He is a little light for 145, but he is doing well so far.”

Junior Jake Metcalf will slide into the starting lineup at 170 pounds, while sophomore Thomas Cormier will compete at 182.

“It is Jake’s third year with the team, but his first year starting. He will do some solid things for us,” Pratt said. “Tommy is another kid who just started us, but just like Ortiz, he also beat a kid who has been with us for two years to get into the starting lineup”

The Rams starting lineup will be rounded out by sophomore Austin Mandalain at 195 pounds and junior Jared Bishop of Wilmington at 285.

“Austin started as a freshman for us last year and he took his lumps, but that can happen for freshmen at the higher weight classes. It’s a little of the same this year as well, but he is tough and he is strong. He will do well once he learns a little more,” Pratt said. “John is really more of a 220-pound kid, but he is doing a nice job at this point. We might switch him back and forth with Santiago at 220, so that is a nice option to have.

Other wrestlers expected to contribute to the Rams this season include Tyler Manty of Tewksbury (113), junior Derek Musgrave of Tewksbury (138), senior Tayla Tildsley (145) and senior Toby Lage and Cullen Walsh of Wilmington, both at 182 pounds.

As is the case every season, the Rams will have a target on their back as the league favorites, but Pratt says that their path to a 15th straight title will not be easy.

The Rams will also face a very challenging non-league schedule, which will include foes like St. John’s Prep, Natick, Springfield Central, Melrose and Tewksbury, among others. But, challenging schedule or not, new coaching staff or not, and young roster or not, the expectations remain very high for the Rams this season.

The Shawsheen Tech Wrestling Team opened the 2021 season with a strong showing in New Hampshire at the Blue Devil Classic at Salem High School on Saturday, finishing in fourth place among 12 teams, totaling 121 points on the day.

As mentioned in the story above, freshman Sid Tildsley led the way for the Rams, going 4-0 on the day to win the 132-pound championship, winning by pin in the finals over a very tough opponent from Nashua South. Saturday marked the high school wrestling debut for Tildsley.

Tildsley was not alone in his fine showing, however, as sophomore Brayton Carbone earned a third place finish at 113 pounds, while senior captains Lucien Tremblay at 120 pounds and Xavier Santiago at 220 pounds, each earned second place finishes.

Another member of the Tildsley family also made his high school wrestling debut, as eighth grader James Tildsley suited up for Billerica High, and made an immediate impact, winning the title at 106 pounds. James was undefeated on the day with big wins over a wrestler from Central Catholic and Spaulding Vermont, both by pinfall.

The Tildsleys’ may be new to high school wrestling, but they are no strangers to the local wrestling community. Both boys have been competing on the youth circuit for close to a decade. They train out of the legendary Doughboy Wrestling club in Lowell.