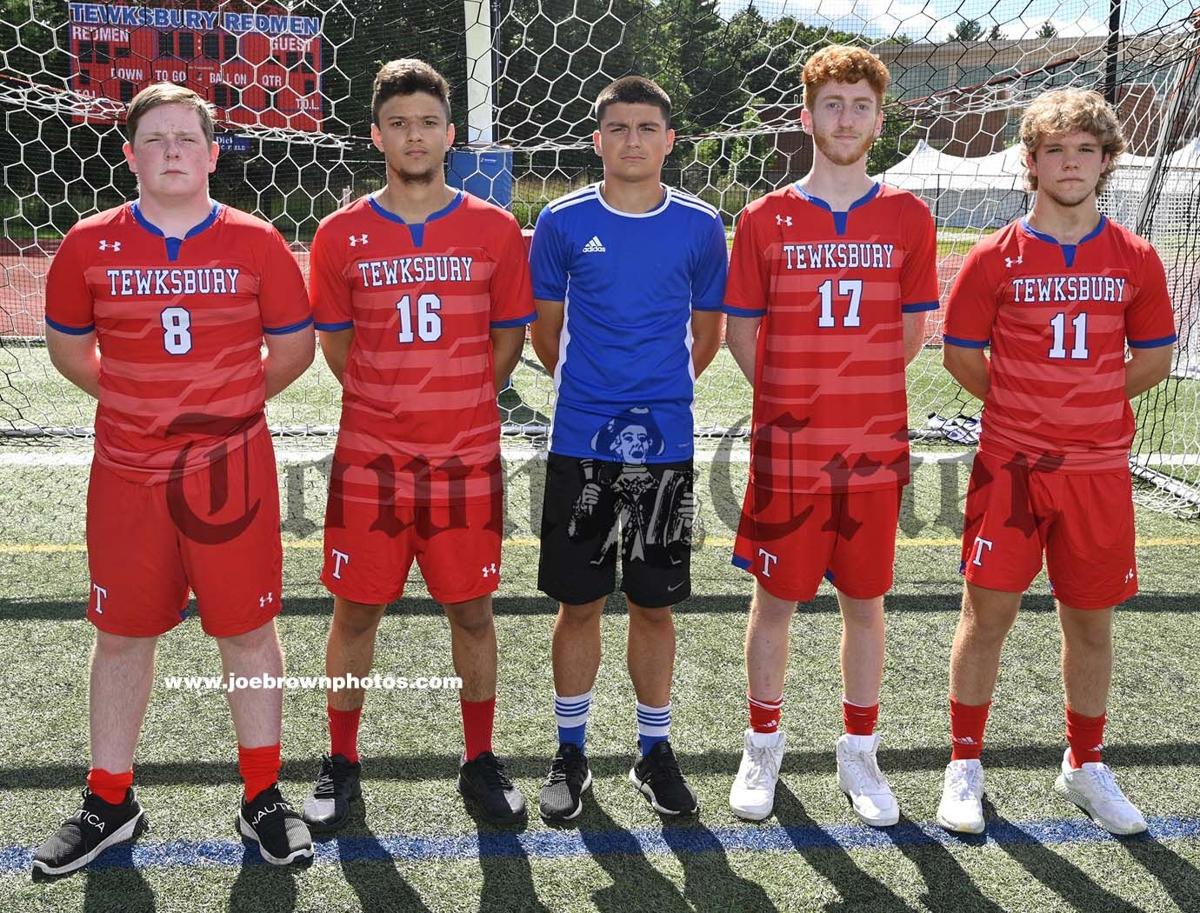 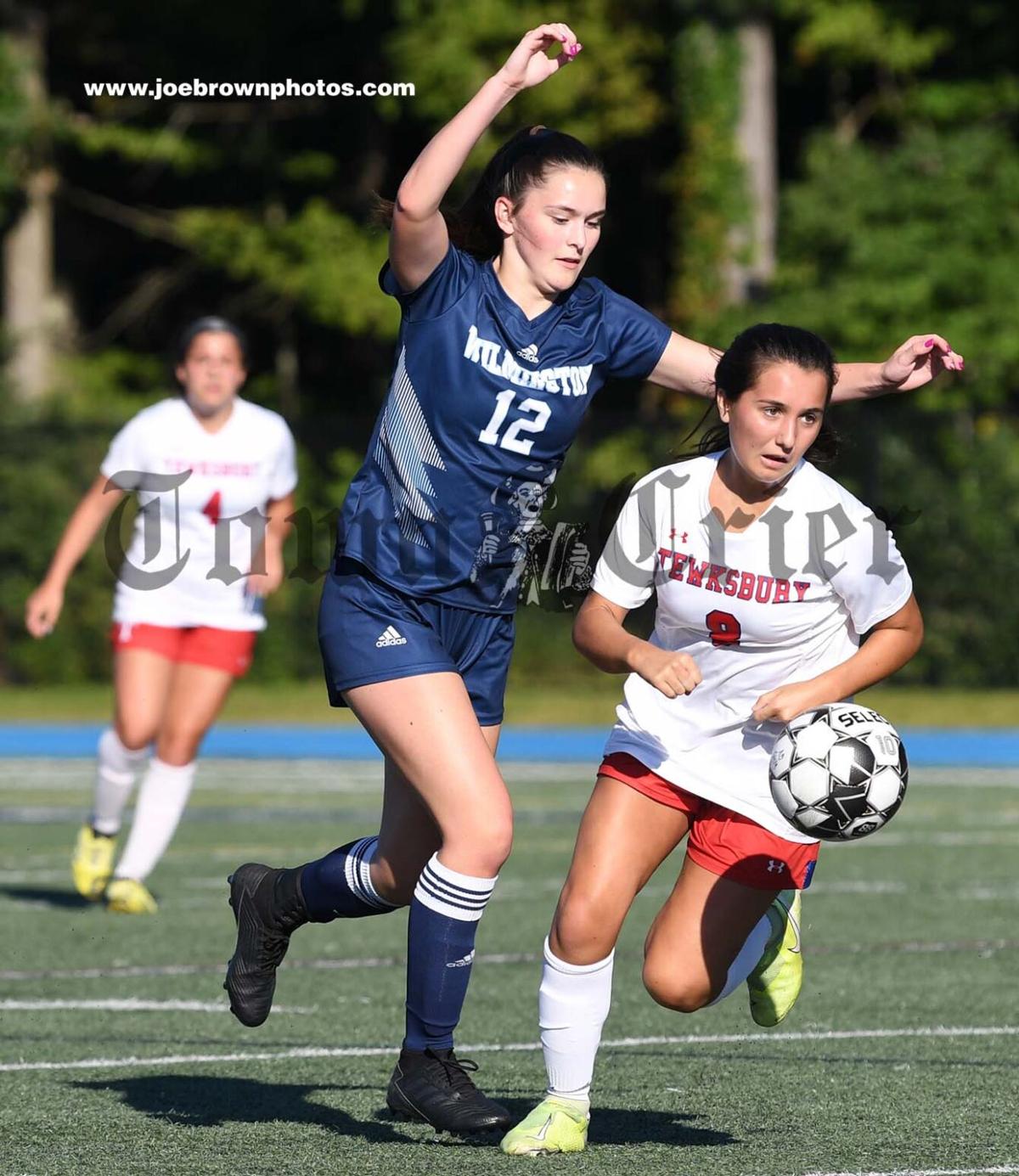 Tewksbury's Jordan Sheehan controls the ball ahead of Wilmington's Olivia Spizuoco during an earlier season game. (photo by JoeBrownphotos.com).

Tewksbury's Jordan Sheehan controls the ball ahead of Wilmington's Olivia Spizuoco during an earlier season game. (photo by JoeBrownphotos.com).

HAVERHILL – On Thursday night, the Tewksbury Memorial High School Boys' Soccer team ended in a 2-2 tie with Haverhill. On one hand that's great news, considering the first time the teams played, the Hillies came away with a 1-0 win. On the other hand, it was a tough point to take, since the Redmen had a 2-0 lead with three minutes remaining, only to give up two goals.

“We had the game, we had more opportunities to score and I thought we played a better game than they did,” said first-year head coach Mario Almeida. “The last three minutes of the game, we went from winning a 2-0 game to give up two goals and end in a 2-2 tie.

“The second one came on a penalty kick at the end of the game, supposedly on a hand ball in our area. I didn't see it, but the kids felt like it wasn't, but it was called so we have to go by what the referees said. We played a great game and I was proud of the way we played. If you can take those three minutes away at the end (we win). It's hard to swallow. The kids played really hard and we had so many opportunities to score. We controlled the game and dominated it. We just got a little complacent in the last three minutes.”

The tie puts Tewksbury at 2-9-3, and extends the team's winless streak to five games.

“Most of the season we have been competitive. It's just those few moments where we kind of lose focus. I'm happy for the guys today with the tie, but I wish we had gotten the win,” said Almeida.

Tewksbury faced Central Catholic on Tuesday night with results not known as of presstime and then have four games left with Lawrence at home on Thursday, Dracut in a make-up game at home Saturday morning at 10, at Andover on Tuesday, home against Methuen on the 28th.

“I think all of these games are winnable. I go into these games thinking that we can win,” said Almeida. “We just have moments in games were we get trapped and lose a little mental focus. We have a young team, especially with a lot of the injuries, so mentally we're not there yet.

“We have been competitive I think for all but two games. I'm happy and proud of the kids. Obviously as a coach, you want to win games. We have a lot to learn, we have a lot to build on for next season. We're hoping in these next five games that we can make a run.”

After giving up a combined 13 goals in two ugly losses, which includes five goals to one player in a loss to Haverhill, the Tewksbury Memorial High School Girls' Soccer team seemed to get back on track on Thursday night. Facing another outstanding Merrimack Valley Conference Division 1 team, the Redmen hung in there against Andover, falling 3-1.

“I'm proud of them. We had a really good game today and this is the best that we have played in a while,” said head coach Samantha Tavantzis. “We got after it today but unfortunately sometimes in soccer the score doesn't indicate the actual game. They got a penalty kick goal and then they scored off two corner kicks, which obviously we didn't defend too great on the second on they scored. We also didn't finish our own scoring opportunities. As a coach I hate losing but today is kind of what we needed, play a real good team and get back into feeling really good about ourselves.

“We had a couple of tough losses and we were in a slump and I feel like today was the game, or hopefully will be the game, to bring us out of it.”

Andover scored on a penalty kick midway through the first half and then executed two perfectly successful corner kicks in the second half, coming in the 8th and 10th minutes.

Tewksbury got on the board with about eight minutes to go as senior Daniela Almeida converted on an off-balance shot from about 20 yards out, and from a real tough angle.

“Dani had a great goal – I would have liked if she got that second one where she shot it completely at the goalie, but that's OK, she rather make it from a near impossible angle from (20 yards out),” Tavantzis said jokingly.

On Tuesday, Tewksbury got back on track with a 3-0 win over Dracut. Jordan Sheehan netted two goals and Daniela Almeida had the other.

The Redmen close out the regular season with four games, at Bedford on Friday in a non-league game, home against a red-hot Chelmsford team on Tuesday night, and then at Central Catholic and Newburyport on the 28th and 30th.