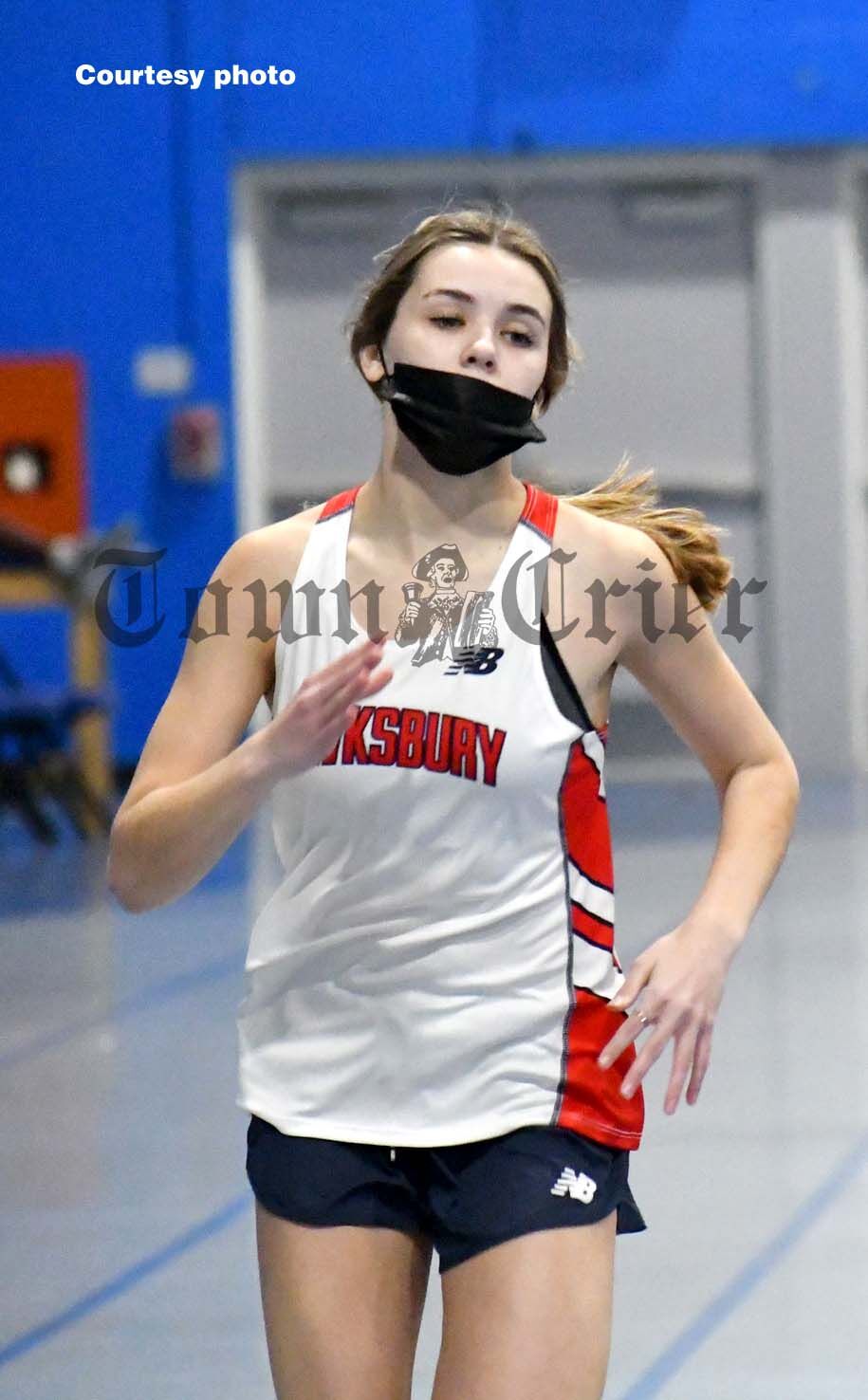 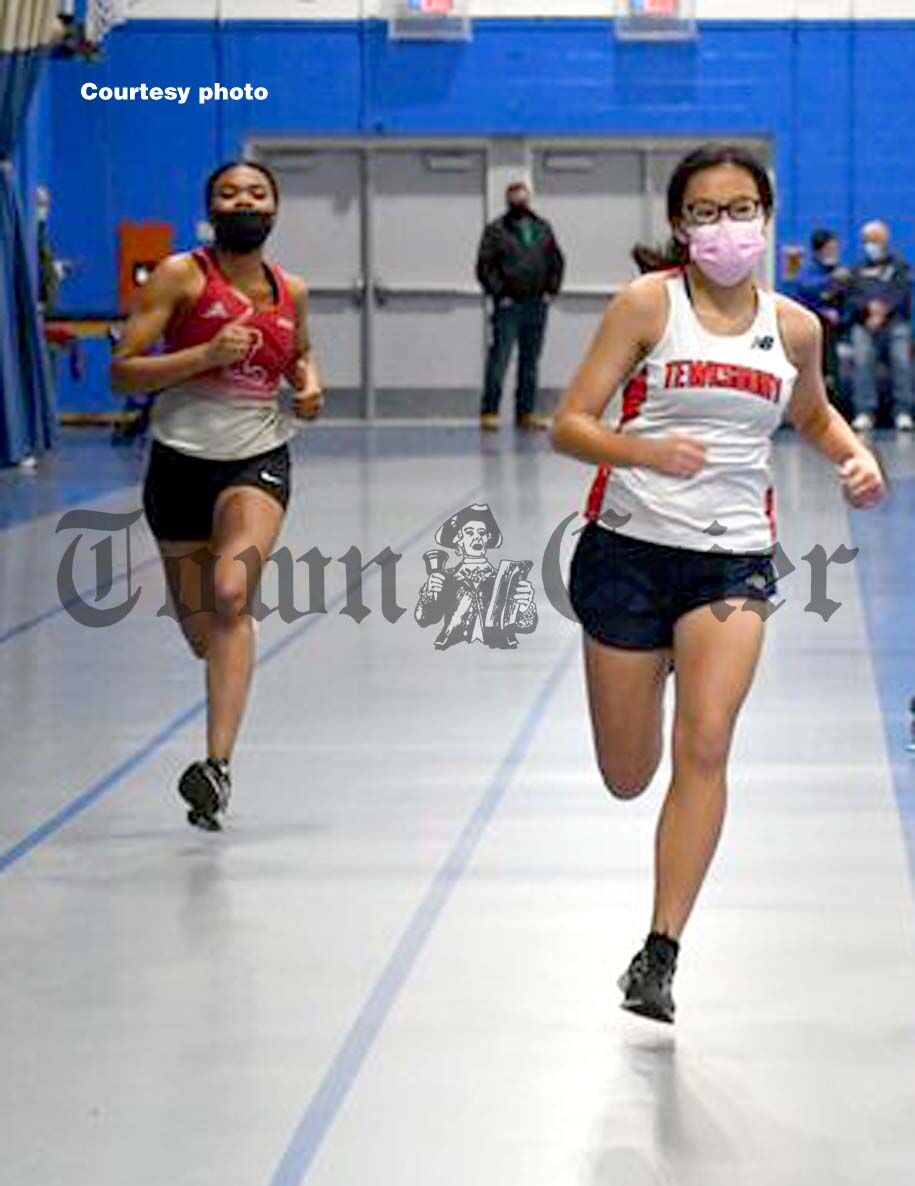 BOSTON – Competing for the first time in over two weeks, the Tewksbury Memorial High School Girls' Indoor Track-and-Field team went 3-1 in the second round of the Merrimack Valley Conference Dual Meets, putting the team's record to 5-3 overall.

The Redmen defeated Chelmsford (46-43), Lawrence (68-17) and Dracut (52-35), while falling to Billerica (81-18). All of the athletes in the entire league race against each other, but team scores are kept with the large schools going against the large and small against the small.

Certainly the Chelmsford win sticks out, as the meet came down to the 4x200 relay with Tewksbury coming out on top behind the efforts of Carrina Barron, Charlotte Morriss, Reese Maniscalco and Kimsan Nguyen who had a combined time of 2:01.52, easily beating Chelmsford (2:03.17).

“The 4x200 team is extremely young with a junior, a sophomore and two freshmen,” said head coach Fran Cusick. “I wasn’t sure of exactly what the score was in the meet, but I knew it was close between us and Chelmsford. We were in the same heat as Chelmsford and I told the girls before the race that, if they needed any extra motivation to run fast, that the meet was likely going to come down to this race and that they needed to do everything they possibly could to beat Chelmsford

“Reese was our lead off leg and she has been awesome this season, she’s very raw right now but she’s clearly got a lot of talent and has a great attitude. She ran a fantastic race and had probably a 2.5 second lead over the Chelmsford runner coming down the home-stretch. Unfortunately, disaster struck as Reese ran pretty much full steam into our second leg, Kimsan Nguyen. Both Kimsan and Reese hit the deck, but to her immense credit, Kimsan got up probably quicker than any kid I’ve ever seen get up after a fall, and got right back into the race. The miscue though switched the dynamic of the race from us being ahead by a couple seconds to them being ahead by a couple seconds; things were looking dire. Amazingly, Kimsan shook off the fall and got us back into contention by the time she handed off to Charlotte Morris.

“It was a tough spot for Charlotte, a freshman who’s never done track before and actually joined the team late. However, she ran a very smart and solid leg and got the baton to Carrina with probably a one second deficit to make up. Once we were in that position, I was pretty confident we were going to be able to win this thing and sure enough Carrina positioned herself perfectly and managed to pass the Chelmsford runner in the last 50 meters.”

Tewksbury's other relay team, the 4x400 which consisted of Noelia Cura, Ava Nordburch, Maci Chapman and Cassidy Paige finished 7th overall at 4:48.83. Paige was extremely busy on the day as she was also tied for tenth in the high jump (4-4) and 21st in the 55-meter hurdles at 11.44.

“Molly ran a smart and tactical race. She had to take about a week off early in the season due to an injury, but she is back and looking better than ever,” said Cusick. “In this race, she ran her final 200 meters in 37 seconds, which is a blazing fast time and just shows that she probably has more in the tank to use earlier in the race.

“Also, Colleen Cremin had a superb race. She ran a time of 6:55 which is a personal record, but more importantly than the time, she just ran a tactically brilliant race, passing a runner from Dracut in the last lap and finishing with an excellent kick. Colleen has been working really hard this season and unfortunately due to the small size of our team and because of various athletes being out as COVID close contacts, she’s had to do many of her runs solo. So it was great to see her out there and racing well.”

The last athlete to crack the top ten was Ava Piccolo, who was 9th in the shot put, throwing 28-11.

“She continues to impress. Her throw is a seven inch personal record from our last meet. (Assistant) Coach Mike Davis always does a great job getting our throwers ready to compete and this year has been no different,” said Cusick.

“I also want to shout out some of our new athletes who have brought a really positive and hard working attitude to the team in their first season,” said Cusick. “Rania Elouahi, Alejandro Segura, Dephne Alcide and Grace Willey have all done a really nice job both as athletes and as teammates thus far.

“Overall, this was a great day for our team. We have one more MVC league meet next Wednesday at Boston University before heading into the championship portion of our season.”