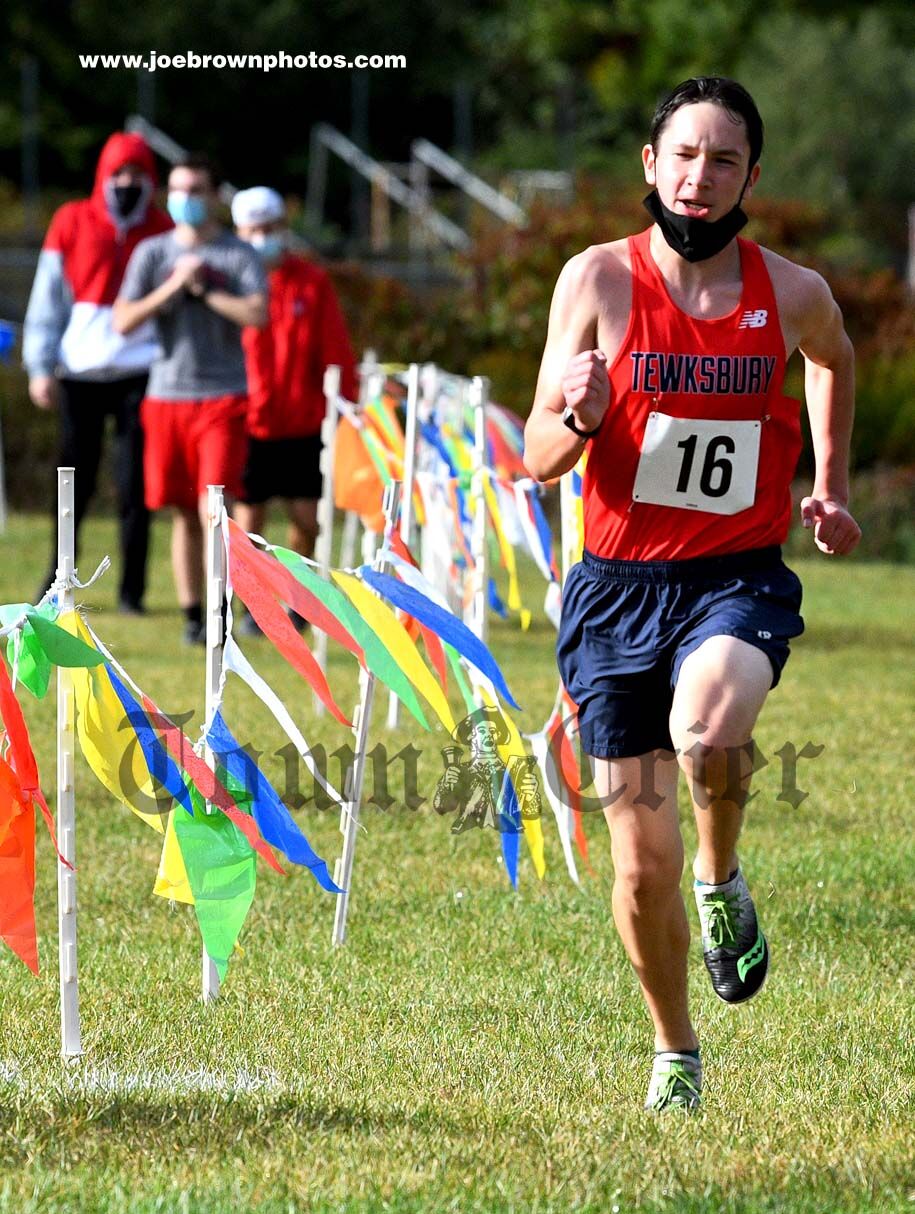 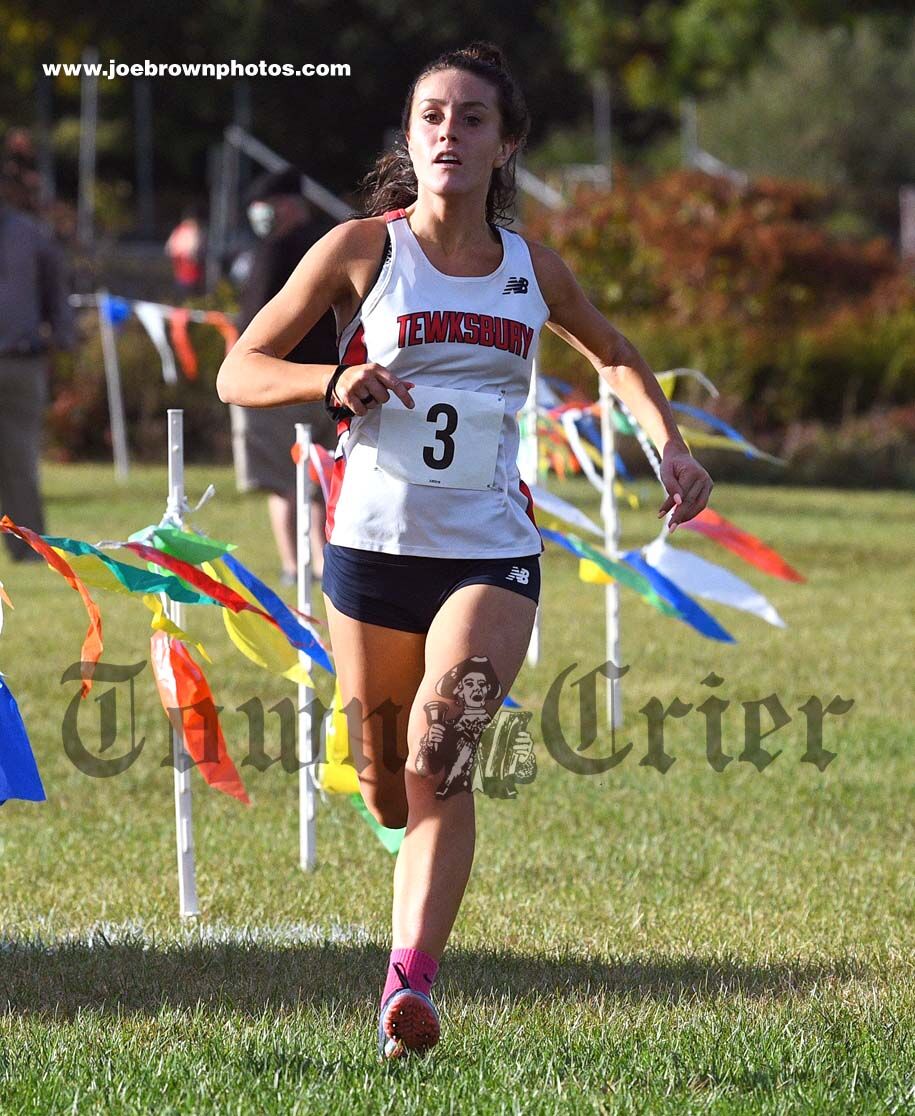 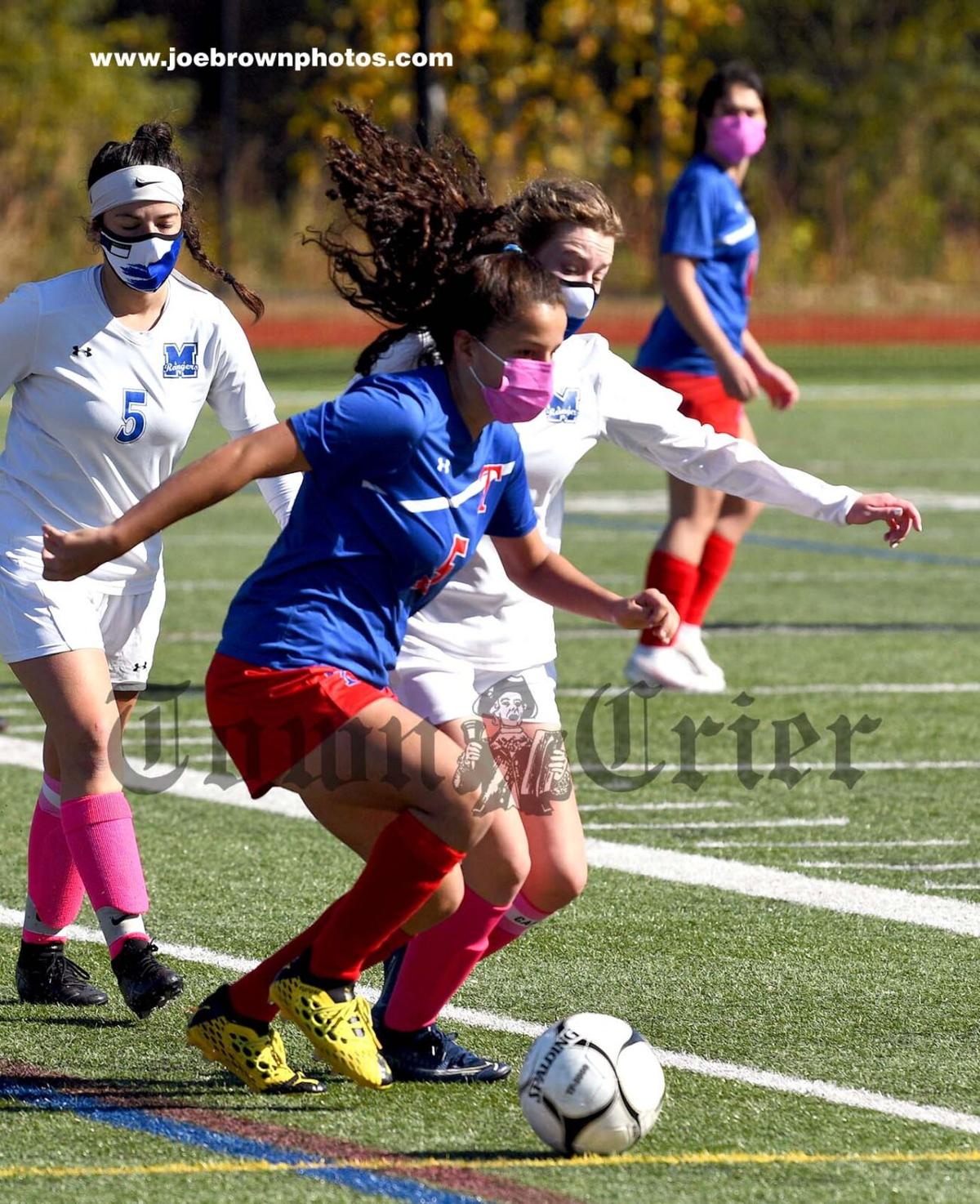 Victoria Catanzano handles the ball in the soccer team’s game against Methuen, played on Saturday. (Photo by JoeBrownphotos.com).

Victoria Catanzano handles the ball in the soccer team’s game against Methuen, played on Saturday. (Photo by JoeBrownphotos.com).

TEWKSBURY – It was a mixed bag of results in terms of wins and losses for the Tewksbury Memorial High School cross-country, soccer and field hockey teams.

The cross-country teams split their meet last Wednesday against Haverhill with the girls winning to improve to 2-1 and the boys were defeated by the Hillies to fall to 1-2.

The girls doubled up on the Hillies winning 20-40. The Redmen took the second through seven spots, which was more than enough for the win.

“We are in a tricky spot at this juncture of the season. All of our meets are at Livingston, which has some positive characteristics in that it is far easier to compare times from week to week, but can become very monotonous,” said head coach Fran Cusick. “If you think about the different factors that go into a cross country race, there are roughly five major ones: the course, the competition, the athlete’s fitness level, the weather, and motivation/psychology.

“The first four of those characteristics have been basically the exact same through our first three meets. We’ve run every meet on the same course, the competition has changed in theory but not in practice since the way we run our meets is with each team in their own wave.

“The weather has been pretty consistent and since these meets are happening in close proximity to each other there isn’t a major change in fitness from week to week. Now, clearly this is a preferable situation to having no season at all! But it’s certainly not easy, particularly in the middle of the season where the enthusiasm and excitement of the first couple meets has worn off a bit.

"All that being said, it would have been easy to have a let-down in this race and we didn’t do that at all. I loved the way our kids have approached this meet and they’ve been extremely positive throughout everything. It’s amazing to think about as I still feel like we just got started, but we only have three meets left in the season: Central Catholic, Dracut, and Lowell. I think if we run great and continue to improve we could win out in our last meets to end the season at 5-1."

"We got a great effort out of senior Izzie Carleton, who improved her time on the Livingston course for the third consecutive week. Izzie went 20:01 in race one, 19:32 in race two, and 19:03 in race three. We also got a strong effort from Makayla Paige, who ran her fastest time of the season on the course and from Erin Sands, who had a nine second course personal record of 20:39.

“Molly Cremin has just been a rock solid presence for our team all year. We were thrilled when she joined the team last year and she has lived up to her potential by being a great runner and teammate and consistently putting out excellent races.

“On the JV side, Cassidy Paige won the race and Victoria Allen had her best race of the year with a 23 second improvement from week one.”

On the boys side, Haverhill came away with a 17-43 victory.

“We have been home every meet so far which I am sure is tough on our runners because they have run the same course for three straight weeks. However, it is helpful so we can compare our times and results week to week. A few of our guys did not run well compared to our race last week. However, we did have a few highlights from our senior class. Seniors Cam Gondola and Josh Linnehan each had their fastest time of the season. They are two of our key returners and we need them running well and improving each week.”

“Danny was the highlight of the day,” said Fortunato. “He ran in our first meet but was injured against Haverhill last week. This week against Methuen, Danny improved his time by 43 seconds to get down to 17:07 and came in as our fourth man. Danny has been a huge addition to our team and had a phenomenal work ethic. I am excited to see what the rest of the season has in store for him.”

The Redmen improved to 2-0 with a 3-1 home victory over Methuen. Iris Diaz-Archilla scored the first goal and she stole a pass, dribbled to the net with the ball and scored from the '18. Daniela Almeida notched the game winner on an unassisted goal before Allie Indingaro grabbed the insurance goal on an assist from defender Erin McIntyre. Goalie Kassidy MacDonald made eight saves for the win.

The TMHS Field Hockey team dropped a pair of games to Methuen this past week, 5-0 on Saturday and 5-2 on Tuesday putting the team’s record to 0-3. In Tuesday’s loss, Alexis Raymond and Ali Kennen had the goals.