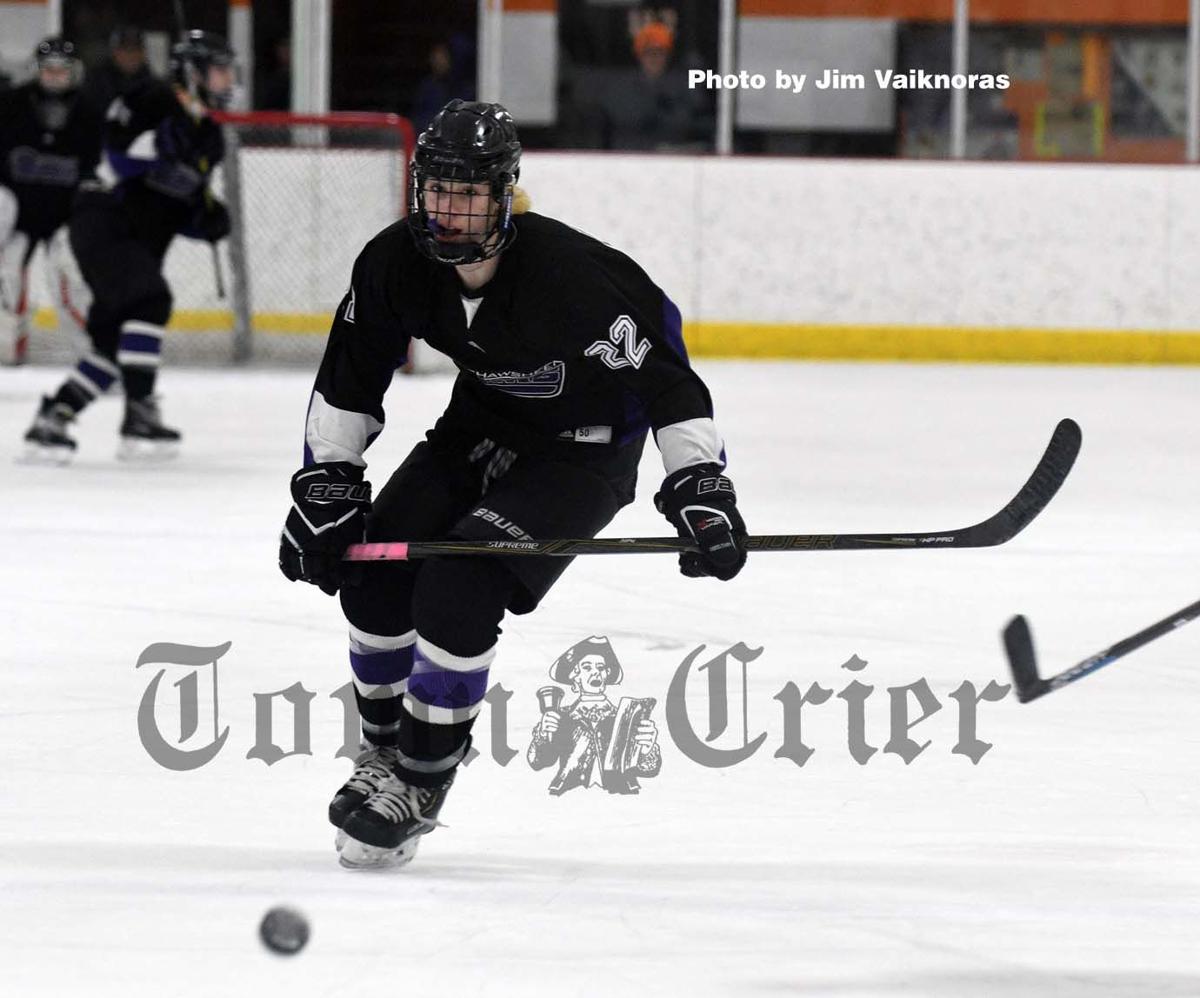 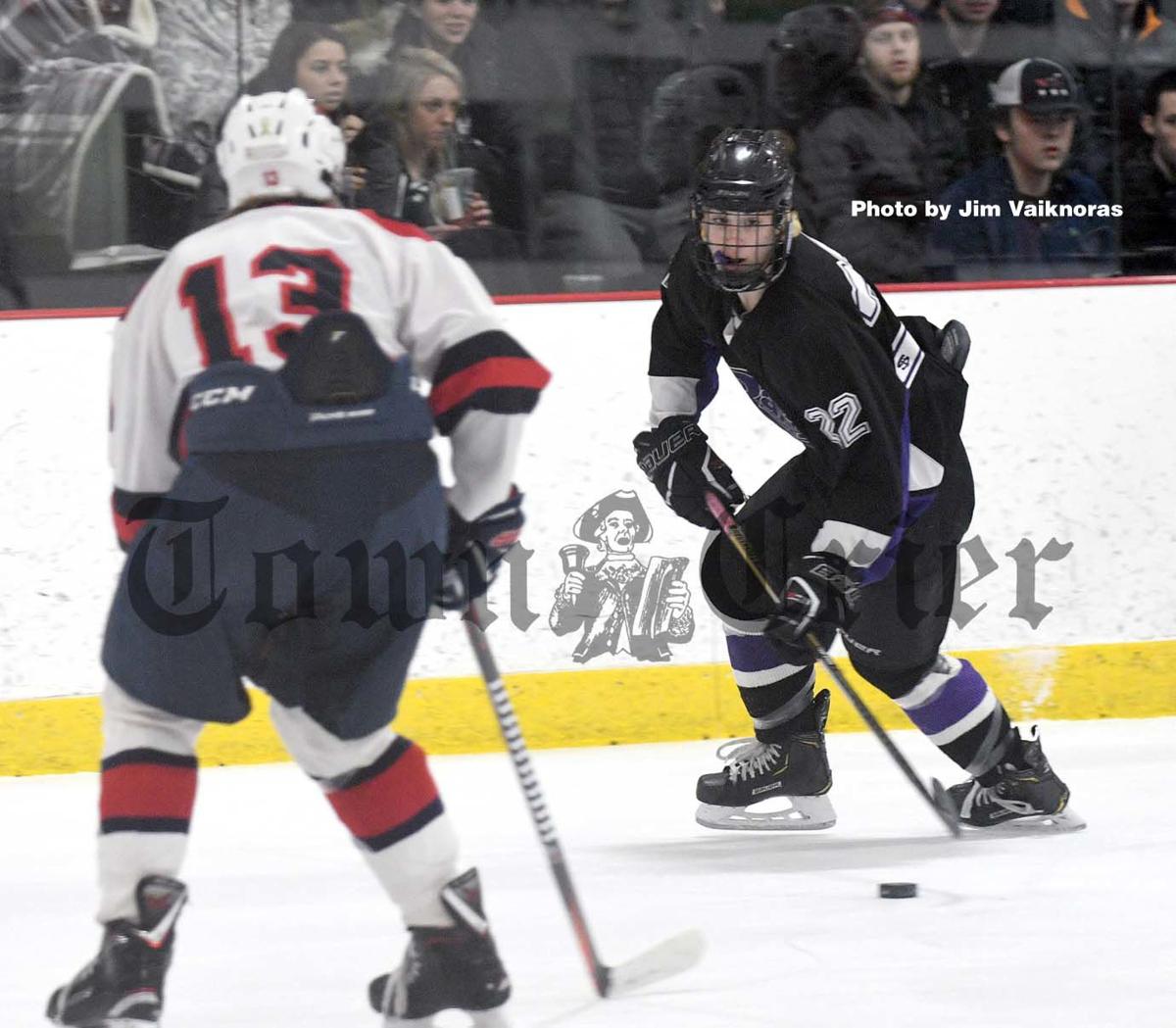 Shawsheen Tech junior forward Brady McFadden tries to make a move on a Lynn defenseman for the Rams during their state tournament loss to Lynn held on Saturday in Woburn.     (photo by Jim Vaiknoras).

Shawsheen Tech junior forward Brady McFadden tries to make a move on a Lynn defenseman for the Rams during their state tournament loss to Lynn held on Saturday in Woburn.     (photo by Jim Vaiknoras).

WOBURN – Over the next couple of seasons, the Shawsheen Tech Boys Hockey team will likely look back on Saturday’s 6-3 loss to the Lynn Jets in the quarterfinals of the Division 3 North Sectional Tournament at the O'Brien Rink as a great learning experience, a stepping stone to bigger and better things.

With a roster full of talented underclassmen, there seems to be little doubt the Rams will be back in position to go even further in the years to come. But a bright future doesn’t make Saturday’s loss any less painful for this group of Rams, who for the second year in a row were eliminated in the quarterfinals by Lynn.

Last year’s loss was a 3-2 heartbreaker in overtime. While this year’s loss was a little less dramatic, the 6-3 final does not indicate just how close the game was. Shawsheen, who trailed 3-1 at the end of the first period, tied the game at 3-3 early in the third period before Lynn scored twice midway through the period, and then added an empty netter with just over a minute left.

“I just told the kids that when we tied it 3-3 I was really thinking we were going to get a regulation win,” Shawsheen coach Chuck Baker said. "But then they got that fourth goal, and that deflates us a little and they get the fifth one which made it very tough for us to come back.”

Lynn got on the board first in this one, when senior forward Andrew Patrie scored a shorthanded goal for the first of his three goals of the game to give the Jets a 1-0 lead with 6:57 left in period.

Shortly after the goal, the Rams took a five minute major penalty for boarding, which proved to be the turning point in the game for both teams. While Shawsheen initially responded to their misfortune in impressive fashion, scoring a shorthanded goal of their own, the penalty soon spelled doom for the Rams.

Junior forward and assistant captain Dan McGaffigan of Tewksbury scored the shorthanded goal, putting in a rebound with 5:33 left in the period to tie the game at 1-1.Junior forward Nate Silva and junior defenseman DJ Williams, both of Tewksbury, each picked up assists on the goal.

The Rams joy was short lived however, as Lynn responded just 33 seconds later, taking a 2-1 lead on a goal by John DeFillippo with exactly five minutes left in the period. Just over two minutes later, the Jets Paul Papageorgiou made it 3-1 with 2:46 left in the period.

The Rams were the victims of some bad luck in the final minute of the period when senior forward Owen Sullivan rang one off the post, and the teams headed to the locker rooms with Lynn holding a 3-1 lead.

“The major penalty was huge,” Baker said. “They get two power play goals there and that just changed the game. It could have been 1-1 heading into the second period, but instead it was 3-1. We knew they had a great power play, so we knew we needed to stop it, but we just weren’t able to.”

Still however, the Rams fought back in the second period, dominating play early on in the period with freshman Dylan Timmons of Wilmington and McGaffigan each having great bids off set ups in front of the net by Silva.

They didn’t convert then, but moments later Silva did cash in, converting a 2-on-1 pass from McGaffigan with a great wrist shot just under the crossbar to pull the Rams within 3-2 at the 4:01 mark of the period.

The score would remain the same through the end of the second period, and early in the third period the Rams would pull even when Silva stole the puck at the Lynn blue line and then beat the Lynn goalie for an unassisted goal just 1:37 into the period to tie the game at 3-3.

“We had some momentum going at that point, and I really felt like we were going win the game,” Baker said. “But we couldn’t score and then we put them back on the power play and once again they capitalize on it.”

The penalty Baker was referring to was a tripping call that came with 9:11 left in the period, and it took Lynn just over 30 seconds to take advantage of the power play, when Patrie scored his second goal of the game to make the score 4-3 with 8:34 left.

Baker was disappointed with the results, but certainly not the efforts of his young team.

“One thing they did do was battle all the way through,” Baker said. “Our game against Swampscott (a 5-3 first round win) was by far the best game we have played all season. We weren’t as clean today, but then again we faced a much different team today. Our effort was definitely there today.”

That effort is just part of the reason Baker is excited for the future of the program. With their entire top line of freshman Timmons and juniors Silva and McGaffigan all returning, along with junior goalie Kam Neault of Tewksbury, and several other key players including juniors Drew Theodos and Brady McFadden of Tewksbury, the future certainly appears bright.

“I am very excited for what we are bringing back,’ Baker said. “We had a very good freshman class. A lot of the freshman kids ended up on JV, and they will continue to grow, and we have an excellent junior class as well.”

As excited as Baker is for what his team is bringing back, he also knows that the teams will most definitely miss their three seniors, Kevin Chase, Owen Sullivan and captain Beau Ramsey.

“We are going to miss all of those guys,” Baker said. “Beau was one of the most energetic captains we have had in a long time. Every day meant something to him. He worked hard in every game and every practice. He was not the most skilled captain we ever had, but he gave us everything he had, and it was the same with all three seniors. They gave the team everything they had.”