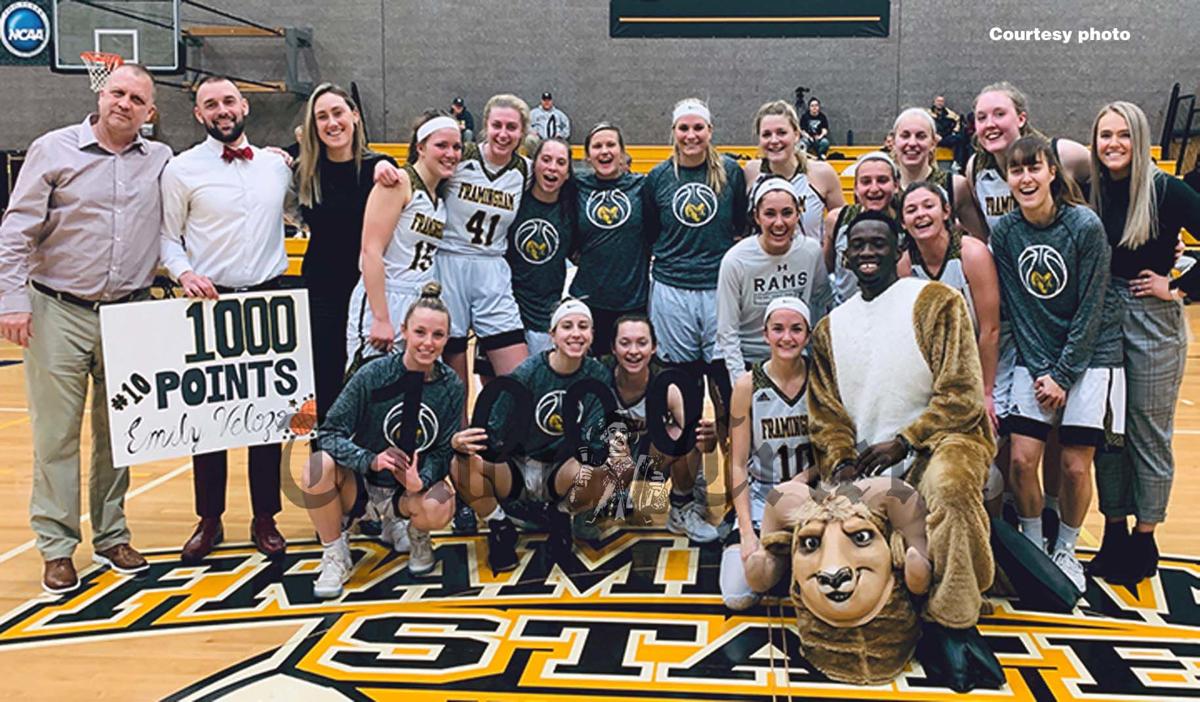 Tewksbury resident Emily Velozo, front row No. 10, is a senior at Framingham State College and last Wednesday she surpassed the 1,000 point plateau in her career. Standing next to her is Manny Payton, Emily’s boyfriend, who is currently playing professional basketball in Ireland and flew in for the special occasion. He decided todress up as the team’s mascot for the day, surprising Emily with his appearance in the post-game celebrations. 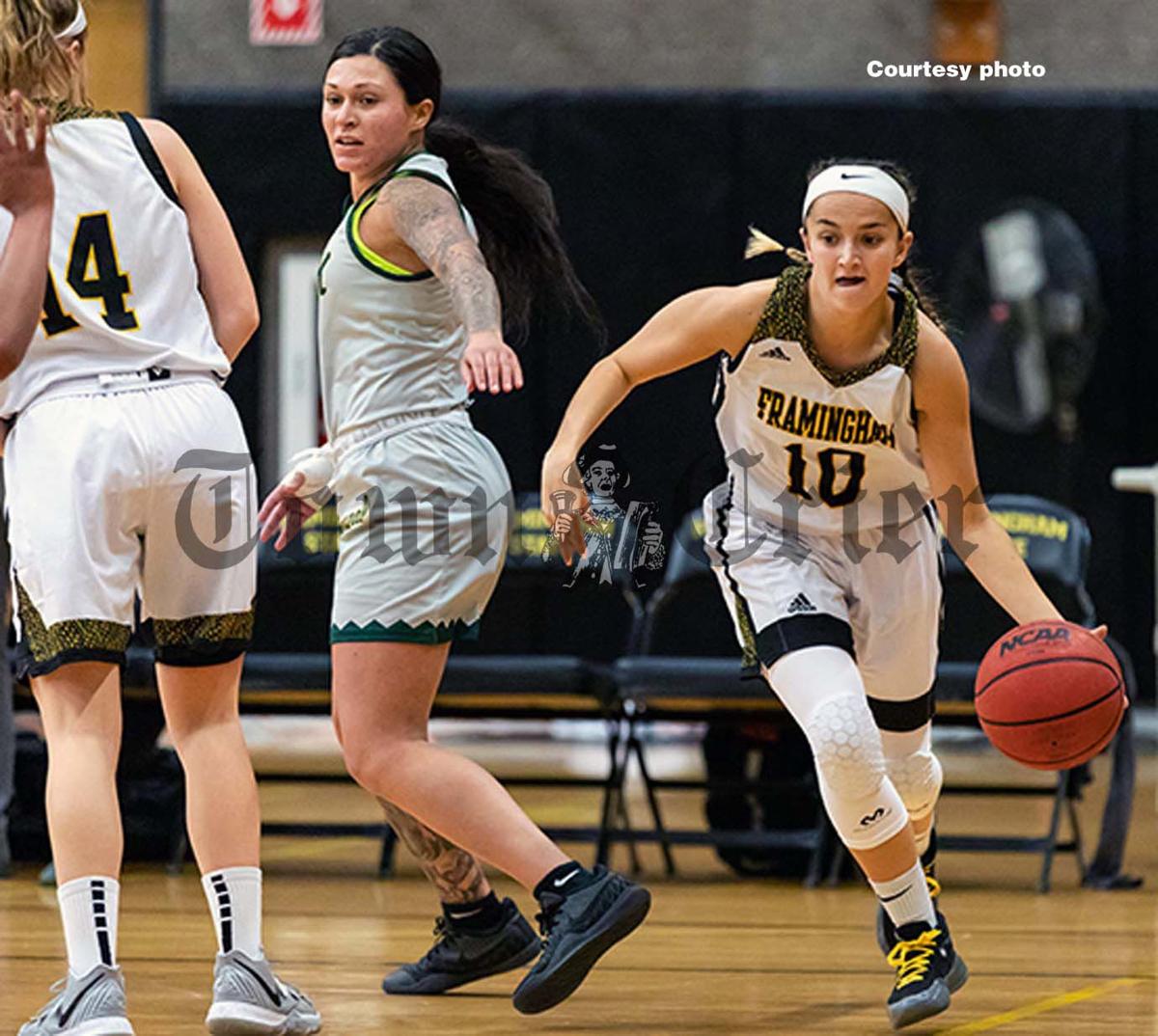 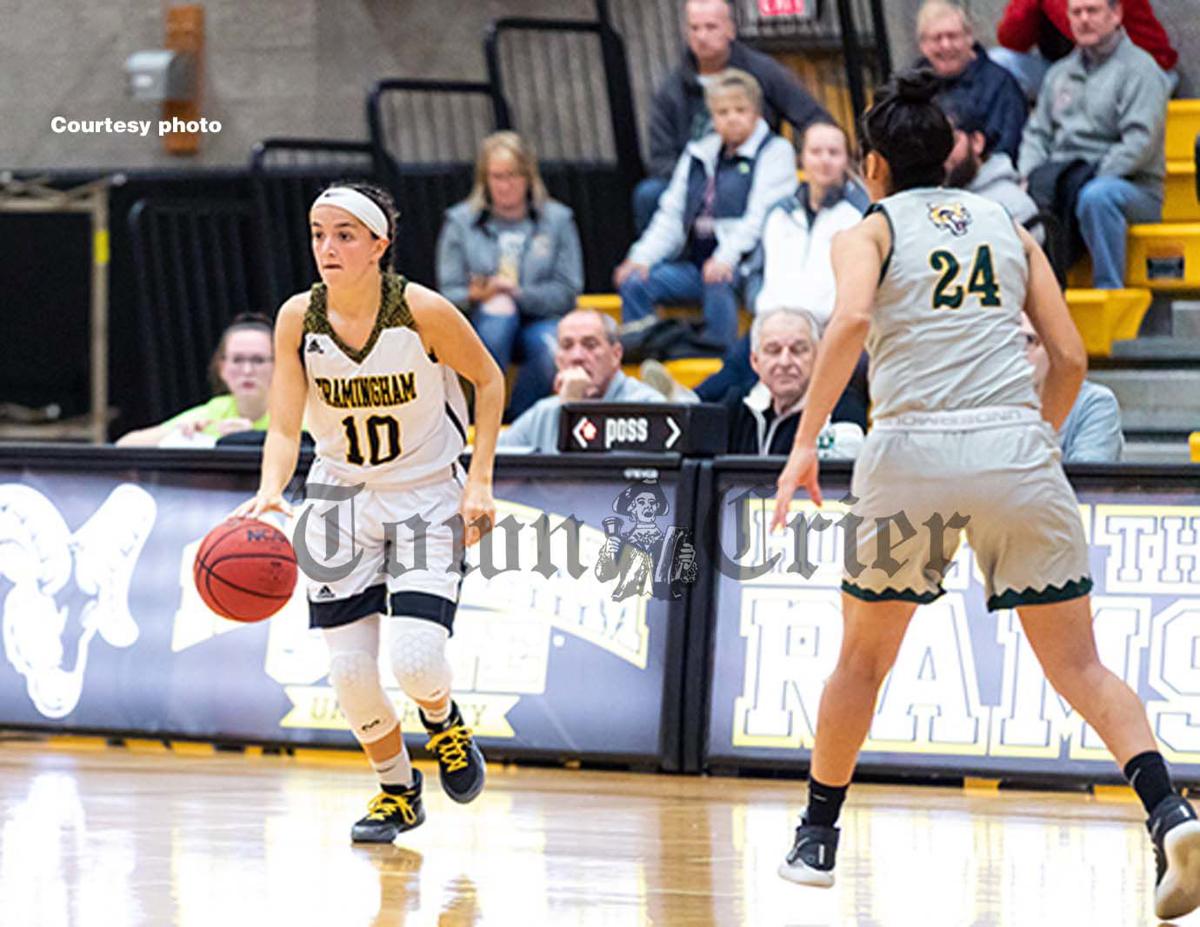 Tewksbury resident Emily Velozo, front row No. 10, is a senior at Framingham State College and last Wednesday she surpassed the 1,000 point plateau in her career. Standing next to her is Manny Payton, Emily’s boyfriend, who is currently playing professional basketball in Ireland and flew in for the special occasion. He decided todress up as the team’s mascot for the day, surprising Emily with his appearance in the post-game celebrations.

FRAMINGHAM – Just a year after leaving Tewksbury Memorial High School after a superb senior season and career — which included scoring 898 points in three seasons — Emily Velozo found herself on the bench of the Framingham St. University women's basketball team. In 26 games, she played in just 14 of them and ended up scoring just 22 total points.

Velozo didn't get discouraged. She knew that she was on an outstanding team that finished 21-5 and lost in the conference championship, and eventually her opportunity would come.

After that season ended, she realized to play at the next level that she aspired to do, she needed to work on her game. She developed a jump shot, she worked on handling the ball going in different directions and she quickly climbed the ladder.

Velozo made an incredible leap, going from scoring an average of 1.6 points per game as a freshman to 9.4 as a sophomore, 14.8 as a junior and this year an incredible 18.7.

This past Wednesday, all of that hard work came to fruition as the two-year captain became the 13th player in program history to surpass the 1,000 point plateau, which is truly amazing considering she accomplished the rare feat in basically less than three full seasons.

"We weren't sure if Emily was going to be able to take the next step (after that freshman season)," said head coach Walter Paschal. "But each spring and summer she worked at it and got better and better. She ended up making (MASCAC) second team all-conference last year and now has made even bigger strides this year. She scored her 1,000th point and now will have her name on the banner forever."

In her first three years with the program, Velozo has been part of three successful teams which finished 21-5, 16-10 and 16-10. After losing just one player off last year's team, this year's team had high expectations.

The season started off strong until the team went through a tough stretch in mid-December, at one point losing four-of-five games but have since rebounded with a six-game winning streak.

The Rams are currently 14-5 on the season, including a 6-0 mark in the MASCAC.

"(The season is) going really well," she said. "We definitely went through a rough patch at the start of the season. We were struggling to find our identity, and we found it now and we’re undefeated in the league. We were expected to be one of the stronger teams in the league this year.

Velozo along with fellow captain and 1,000 point scorer MaryKate O'Day have formed a phenomenal 1-2 punch this year, both averaging over 18 points per game. Velozo has had some huge games, including 33 points in a win over Maine Fort-Kent, 37 against Anna Maria College and in total, she has scored 20 or more points in 9 of the team's 19 games. She has a field goal percentage of 49 percent and 47.3 percent from three-point land.

In addition, she is also averaging 3.9 rebounds and 2.6 assists per game.

"Emily is fearless and she goes to the hoop against everyone and anyone," said Paschal. "It doesn't matter what size they are. She has a high basketball IQ. She knows where to be and also knows where everyone else needs to be."

In order to get those stats to escalate as rapid as they did, Velozo said that the off-season after her freshman year was vital.

"When I came in as a freshman, I didn’t expect to play that much," she admitted. "I kind of compared it to the first year I was on varsity in high school as a sophomore. I would come off the bench and just had to do what I had to do.

“I didn’t expect to not play at all (at Framingham), but I was on a team with a lot of other 21 and 22-year-olds, and part of a team that finished 22-5 so there were obviously strong girls ahead of me. It just helped me to work on getting better. It didn’t discourage me.

"I worked on being a more diverse player. I would always go to my left and go to the left to make lay-ups, so I really worked on developing a jump shot and working the ball different ways. I am more confident now with my shooting, but I think I got a lot of extra reps over the summer and that’s when I really worked on that jump shot."

"I was averaging 18 a game so I didn’t think it would be difficult to get," she said. "I started the game off and I couldn’t find my jump shot, which I really never had a problem with this year. At halftime I only had four points, but I really wasn’t worried about it.

“Going into the fourth quarter, I still only had four points. Then later in the fourth quarter, I hit a three-pointer, which would have given me the 1,000 points but one of my teammates was called for a foul on the play so the shot was called off. Then I took the ball to the hoop and scored but they called me for an offensive charge, so that basket didn’t count either."

Despite having those baskets get taken away, she didn't get discouraged.

"There was four minutes left in the game," she said. "I knew that was plenty of time and I wasn’t stressed about it. I also knew that it wasn’t the last game of the season, so I still had plenty of chances to do it. So ('O'Day) gave me a pass and then she set a screen for me, and I took a three-pointer from the top of the key and it went in."

It's a shot that she will never forget.

"I never thought it was something that would be possible," she said. "I didn’t do it in high school — I finished with 898 and did that from my sophomore to senior years as I wasn’t on varsity as a freshman. When you don’t do it in high school, you really don’t think about doing it in college. I’m definitely happy that I have been given this opportunity."

Framingham went on to win the game 77-51. After the game was over, she celebrated with her teammates and friends. But then something else happened that she'll never forget, her boyfriend, who is playing professional basketball in Ireland, was on hand for the special achievement, but not in the stands. He was in disguise as the team's mascot.

"There was a mascot around me and he didn’t reveal himself for a while and when he did, it was just crazy," she said. "It totally blew my mind. I still don’t believe it happened and he did that. It was awesome and just meant so much to me."

Velozo added that her father secretly flew her boyfriend Manny Payton in for the game before he went right back to Ireland.

The Rams have six games left on the regular season schedule before the MASCAC Conference Championships begin. If Framingham finishes first or second in the regular season, they will receive a first round-bye, and then would need to win two games to advance to the NCAA Division 3 tournament.

"Hopefully we’ll be able to get a bye in the first round and if that happens, you go right into the semi-finals and if you win that game, two days later you play for the championship," said Velozo, who will graduate in the spring with plans on becoming a school teacher. "Then if you win the league playoffs, you go to the NCAA (Division 3) tournament. Westfield has won it the last four years, so we play them (later this week) so that will be a good test for us."

Whether the team has a long playoff run or not, Paschal says he knows that he has something special in Velozo.

"She has been a great captain for two years, along with MaryKate O'Day," he said. "They are both great role models for the younger girls in this team and for every young girl who plays basketball. Both of them are special people.

"Emily is very coachable. She can take coaching. She is having a fantastic senior year, and career, and hopefully we can extend the season as long as possible. I know that I will really miss her and MaryKate."