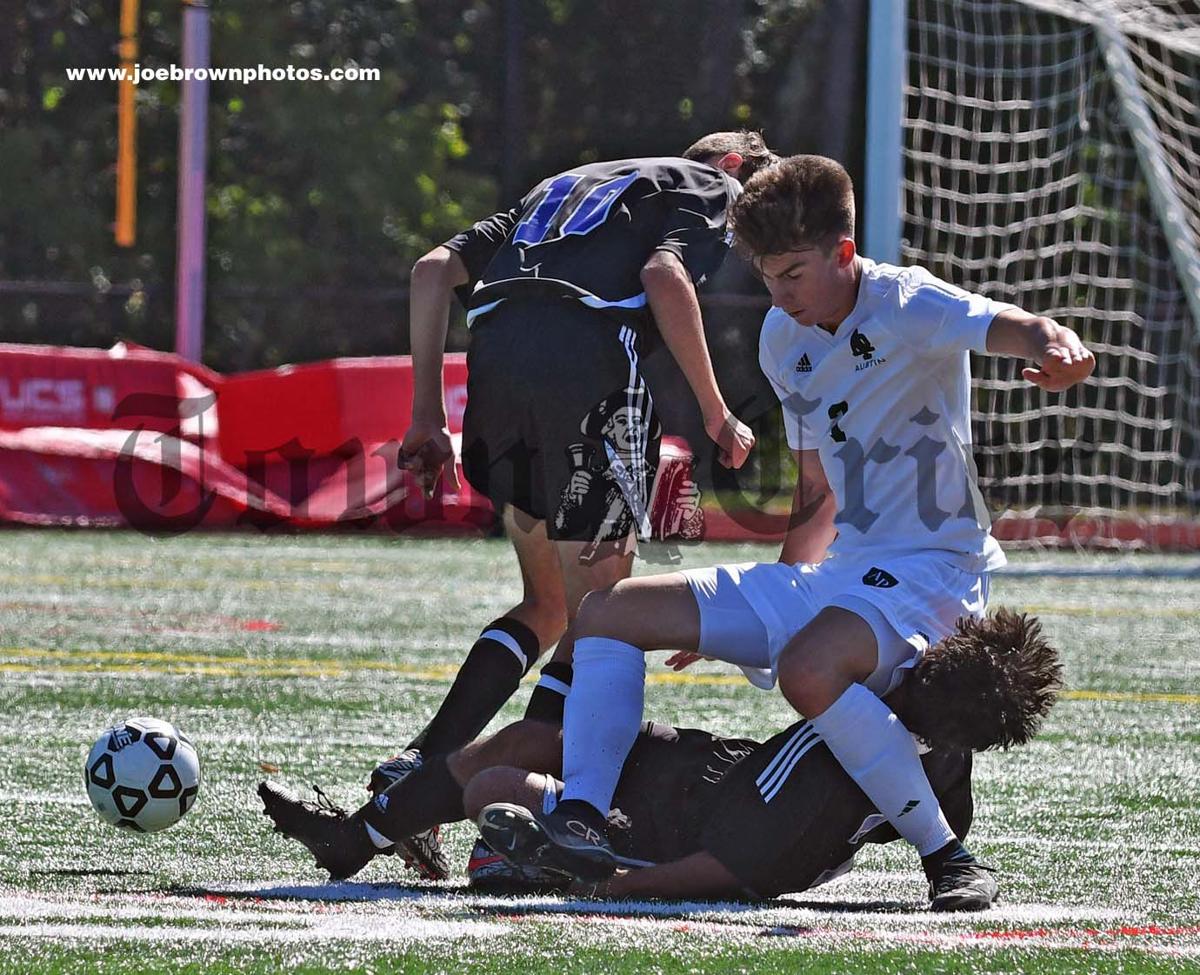 Shawsheen Tech's Jose Cruz is about to be sat on by an Austin Prep player as he and Kyle Simonds battle for possession of the ball during a recently played boys’ soccer game.     (photo by JoeBrownphotos.com). 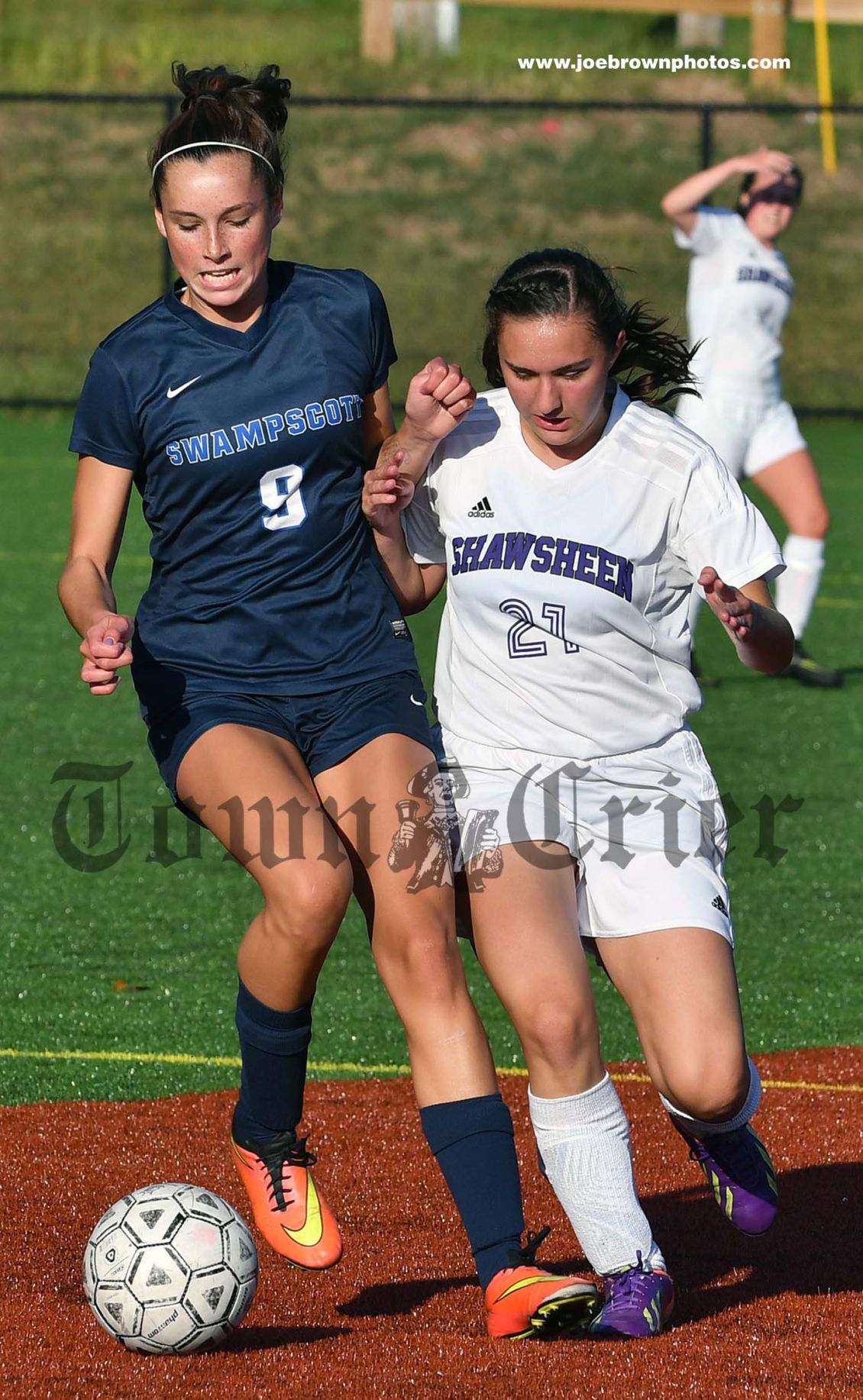 Rachel MacDonald battles for the ball for the Shawsheen Tech Girls’ Soccer team during an earlier season game.     (photo by JoeBrownphotos.com).

Shawsheen Tech's Jose Cruz is about to be sat on by an Austin Prep player as he and Kyle Simonds battle for possession of the ball during a recently played boys’ soccer game.     (photo by JoeBrownphotos.com).

Rachel MacDonald battles for the ball for the Shawsheen Tech Girls’ Soccer team during an earlier season game.     (photo by JoeBrownphotos.com).

BILLERICA — There is still a long way to go in the season for the Shawsheen Tech Boys and Girls Cross country teams, with a tri-meet against two of their biggest rivals on tap for this week, but with the way the Rams have started their season, they have put themselves in great position to capture the CAC title on both the boys and girls side.

With both teams picking up wins in their only meet of the week, against Minuteman Tech last Wednesday at Shawsheen, the girls improved to 5-0 on the season while the boys improved to 4-0.

Both teams won their meets in blowout fashion, with the girls winning by a score of 17-46, while the boys brought home a 15-50 victory.

The girls took seven of the top eight spots over the 3.1 mile course at Shawsheen on their way to the one sided victory, with junior Ivana Wisky of Tewksbury taking first place, followed closely by freshman Rachael Halas and senior Alesha Talbot of Tewksbury.

The boys were even dominant on the way to their 15-50 victory, taking the top seven spots before Minuteman earned an eighth place finish.

While qualifying for the state tournament remains a long shot for the Shawsheen Tech Boys Soccer team, the Rams are certainly playing some of their best soccer of the season over the past couple of weeks.

After losing their third straight game, a 2-0 loss to Chelsea on September 28, the Rams were sitting with a 2-6-4 record, and looking like they were on their way to a long season, but they have turned things around as of late, going 2-1 in their last three games, including picking up a pair of wins over CAC rivals Greater Lawrence and Northeast to improve to 4-7-4 overall.

Shawsheen played its most complete game of the season on Tuesday in picking up a 4-2 win on the road over defending CAC and vocational school champion Northeast Metro Tech, as two goals each half propelled the Rams to victory. Scoring for Shawsheen were seniors Yanni Flaounas, Sam Chebook, and Joe Genetti, along with junior Jared Rizzo of Tewksbury.

In their previous game, Shawsheen dropped a non-league tilt on the road to Bedford by a score of 3-0 The Bucs built an early lead in the rain and weathered a strong second half from the Rams to come away with the win. Playing well for Shawsheen were Billy Eagen, Robert Danehy, Jose Cruz and Jared Rizzo.

After suffering a tough 1-0 loss to CAC rival Essex Tech last Thursday, dealing a serious blow to their CAC championship hopes, it would have been easy for the Shawsheen Tech Girls Soccer team to have a letdown in their next game, but instead the Lady Rams did just the opposite, rolling to a 6-0 home victory over Notre Dame Academy on Tuesday.

With their 1-1 week, the Lady Rams record now stands at 5-6-1 overall, as they begin a late season push to qualify for the state tournament while at the same time keeping their slim CAC title hopes alive.

The win over Notre Dame was a huge step in the right direction for Shawsheen, and coach Doug Michaud was proud of the way his team responded after suffering a tough loss, especially after they had struggled to put away Notre Dame the last time the teams had faced each other just two weeks earlier in a 4-2 Shawsheen win.

“I told them we still have a lot of the season left, and we can’t just show up to games expecting to win. We have to fight for it,” Michaud said. “The last time we played Notre Dame, we went up 2-0, but they tied it up 2-2 before we were finally able to win. This time, I told them that I want us to get the lead, hold the lead, and then push the lead, and that is just what they did.”

The Lady Rams took a 2-0 lead just six minutes into the game, and pushed the lead to 3-0 at the half, before putting the game away in the second half. Shawsheen was led to victory by two goals from junior Megan Brown, as well as individual tallies from junior Rebecca Smith of Tewksbury, senior captain Angie Bankowski of Tewksbury, junior captain Monique Kazelyan and sophomore Maddi McKenna of Tewksbury with her first career varsity goal.

With senior captain and goalie Emily Langone forced to miss the game due to injury, Rebecca Smith and Taylor Sacco each played a half in net, combining for the shutout.

Michaud is hoping that his young team can keep the momentum of the big Notre Dame win going for the rest of the season, and recapture some of the magic that saw the Lady Rams capture eight league titles in a row from 2007-2014 before falling short of the title the past two seasons.

“With this group, only the seniors have seen what it used to be like around here,” Michaud said. “So, we have to tell the younger players that we need to work to get to the level we used to be at. We used to take the field knowing we were going to win, but it is a different situation now, and we just have to keep working to try and get better.”

And Michaud believes his team can keep getting better. While the loss to Essex, who remains undefeated in the CAC, certainly damaged their title hopes, it did not end them, and Michaud remains optimistic that his team, which now has two league losses, can get back in the hunt.

If we win the rest of our league games, which would include wins over Mystic and Essex, who both beat us just 1-0, and then if Mystic can beat Essex we could still end up in a three way tie,” Michaud said. “It is certainly a possibility if we play the way we are capable of playing.”

Shawsheen will be back in action for another league game at Whittler on Thursday, before hosting Wakefield in their Homecoming Game on Saturday at 2:30.

The Shawsheen Tech Golf team inched closer to winning their 13th straight CAC championship this past week, with a 9-0 victory over Greater Lawrence on Tuesday at Crystal Lake Golf Club in Haverhill, improving the Rams record to 6-5 overall and 6-1 in the CAC.

It has been a difficult season at times for the Rams, as unlike most seasons they have not had any success in their non-league matches against foes like Austin Prep, Burlington and Malden Catholic, but a difficult season that still ends up in a likely co-championship, along with Essex Tech, is something that the Rams and coach Tom Struthers can take great pride in.

“Overall our record is not that great because we have had a tough time in our non-league matches,” Struthers said. “I really felt like this season with as many seniors as we have, that we would do pretty well in those matches, but that has just not been the case because they have some really good players who have shot some incredible scores.

“But overall the season has been very good,” Struthers said. “I just wish we had done a little better in our non-league matches.”

There were no such worries against a rebuilding Greater Lawrence squad, as the Rams got some outstanding scores of their own on the way to the 9-0 victory.

Senior Aidan Rexford led the way for the Rams shooting a 38, while fellow senior Zach Carpenter followed close behind with a 39 and senior Kyle Preble of Tewksbury shot a 41.

Some of the biggest wins for the Rams, however, came in the bottom half of the lineup, where some of their talented underclassmen put the match away. Freshman Nolan Rexford led the way for the bottom half of the lineup, shooting a 42, while fellow freshman Steve O’Connor of Wilmington shot a 45. Sophomore Brady McFadden of Tewksbury shot a 47, as did fellow sophomore Andre Comeau.

“It was great to see those guys play so well, especially for their first time playing varsity golf,” Struthers said.

The Rams can wrap up at least a tie for the league title with a win over CAC rival Northeast on Thursday. Wins by both Shawsheen and Essex Tech will create a tie for the top spot, with the two schools having split a pair of matches this season, whereas a win by Shawsheen and a loss by Essex Tech in their final league match will give the Rams the title outright.

Last Wednesday afternoon the Rams played in the Massachusetts State Vocational Tournament, and came away with a third place finish. Certainly, it was an impressive finish among the best vocational schools in the state, but after winning the tournament the past two seasons, Struthers was hoping for a little better performance from the Rams, who finished at 336 strokes, well behind champion Bay Path, who finished at 307.

“I was a little disappointed because I felt like we could have played better,” Struthers said. “It is always a great tournament, and I am happy for the kids who got to play in it, but I just felt like some of our scores could have been better.

Aidan Rexford shot a 79 to lead the Rams, while fellow senior Matt Irwin shot an 82, followed by senior Zach Carpenter with an 86, senior captain Chris Galinos with an 89 and junior Cam LeRoux with a 91.