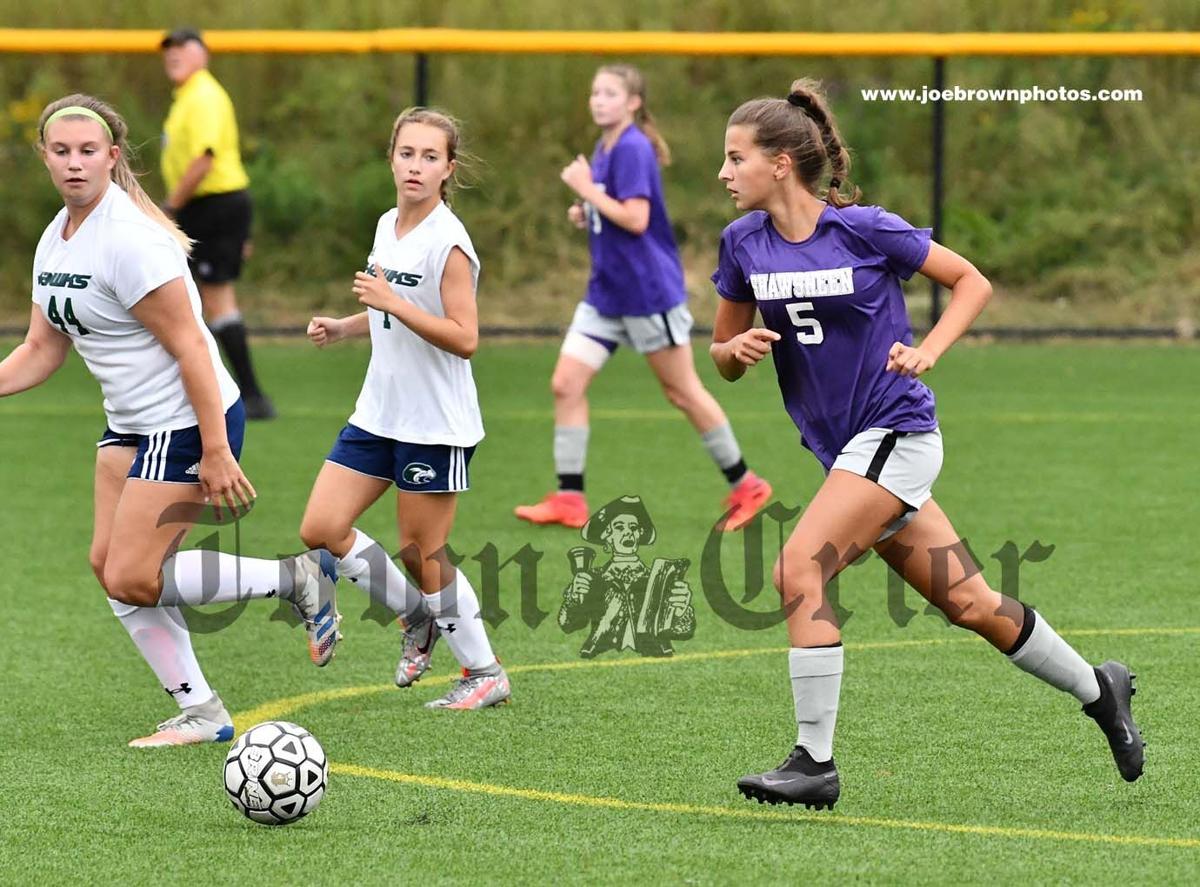 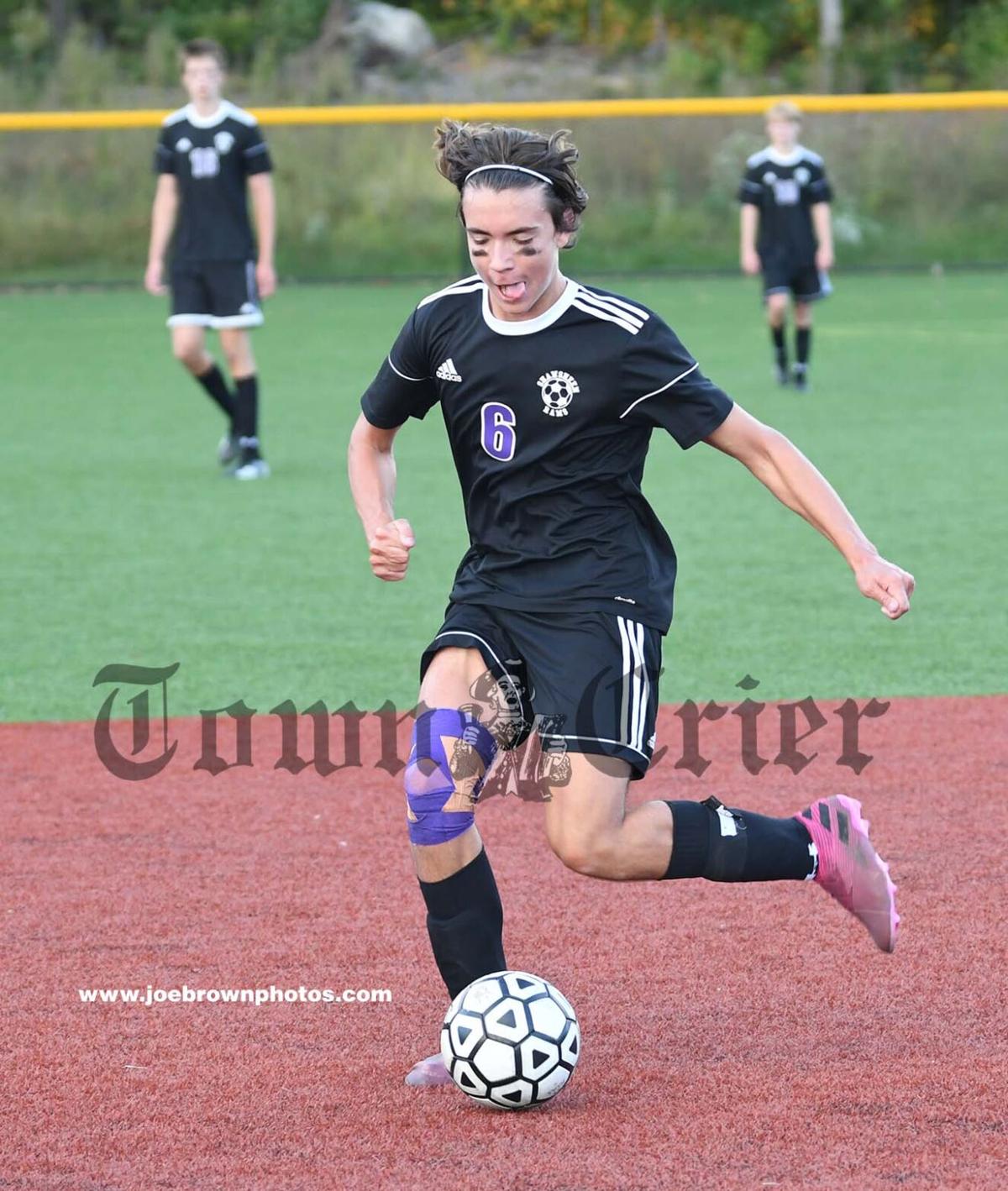 Shawsheen Tech’s Evan Pinto, of Wilmington, moves the ball through midfield for the Rams during an earlier season game. (photo by JoeBrownphotos.com).

Shawsheen Tech’s Evan Pinto, of Wilmington, moves the ball through midfield for the Rams during an earlier season game. (photo by JoeBrownphotos.com).

BILLERICA – After picking up their first win of the season the week before against Innovation Academy, the Shawsheen Tech Girls Soccer team continued their improved play this past week with a 3-1 home win over CAC rival Lowell Catholic last Thursday to improve their record on the season to 2-7 overall at the time.

“That was a nice win for us,” Shawsheen coach Doug Michaud said. “We have been playing much better as of late. We knew Lowell Catholic would be a tough game. I think last season was the first time we were able to beat them. But we played well in this one, and I was happy for the girls that they were able to get the win.”

While the win over Lowell Catholic was their second consecutive victory, the Rams recent run of good play really began the week before in a 4-2 loss to Greater Lowell. The Rams had played very well in that game, going out to a 2-0 first half lead before running out of steam in the second half. While that loss hurt, it set the tone for the victories that were to come.

“That Greater Lowell game was really a pivotal game for us,” Michaud said. “We realized we could play better and also realized we can’t sit on a lead and expect to win. That game was the first time I think we realized how well we could play, and it was kind of a turning point for us.”

Minghella got the scoring started for the Rams about ten minutes into the game, followed shortly thereafter by a goal from Malvone to make the score 2-0. Brown’s goal with about a minute to play in the first half made the score 3-0.

“We moved Kerry back from midfield to defense and she has been playing really well, along with Mikayla (Melanson) back there,” Michaud said. “And we moved Ella up from defense to midfield and she has had a couple of goals and been very instrumental in both of our wins.”

The Rams followed up their win over Lowell Catholic with a 3-0 Homecoming loss to Dracut on Saturday morning. Despite the loss, Michaud felt like his team played very well against their non-league opponents.

“We played great soccer the entire game,” Michaud said. “They were the toughest team we have faced all season. They were very deep. They had excellent starters and an excellent bench as well. I would call it a good loss for us against a tough Division 2 team.”

The Rams will be back in action on Thursday when they host CAC rival Mystic Valley for a 4:00 pm kickoff, before they host Lowell Catholic in a rematch next Tuesday.

With the season heading into its home stretch, the Shawsheen Tech Boys Soccer team seems to be playing some of their best soccer of the season, winning their two most recent games by a combined score of 11-0 to improve to 4-2-4 on the season.

The two most recent wins came on Saturday against Whittier Tech where the Rams rolled to a 4-0 victory, followed by a 7-0 rout of Lynn Tech on Monday.

Monday’s win over Lynn Tech was especially important for one member of the Rams, and he stepped up to make it a special day. Junior forward Joe Woodward, who is also a member of the Rams Wrestling team was competing in his first athletic event since the passing of legendary Shawsheen Wrestling coach Mark Donovan the day before. Woodward honored his former coach the only way he knew how, netting a hat trick in the Rams blowout victory, dedicating the game to Donovan.

“When I took Joe out with ten minutes to play, I gave him a big hug and told him Coach Donovan would be so proud of him. He wanted to show Dunnie how much he meant to him.” said Shawsheen head coach Tom Severo.

Senior goal keeper Tyler Kopacz of Tewksbury had a special day, earning his second consecutive shutout as well as collecting an assist on Rizzo’s second goal after booming the ball down the field to the streaking forward.

In their previous game, the Rams had come up with a big 4-0 win over CAC rival Whittier Tech on Saturday morning as part of Homecoming Weekend at Shawsheen in a game played at Cassidy Field.

Perez led the way for the Rams in this one with a pair of goals and an assist. Woodward had a big day in this one as well, with a goal and an assist of his own, while Rizzo finished the scoring for Shawsheen. The Rams took control of the game early and scored two goals in each half to put the W in the books on Homecoming. Kopacz, meanwhile, was outstanding in net while picking up the shutout.

“The Rams all acquitted themselves well on this special occasion playing in front of the home crowd in the stadium,” Severo said.

The Rams will look to keep their winning ways going on Thursday afternoon when they hit the road to take on CAC rival Mystic Valley.

After more close calls than they would care to remember, the Shawsheen Tech Boys Cross Country team picked up their first win of the season this past Wednesday afternoon in a home meet, and they did so in impressive fashion, earning a 17-44 win over CAC rival Nashoba Tech at the Charles H. Lyons Athletic Complex, as part of a tri-meet against Nashoba as well as CAC rival Greater Lowell. The Rams fell to Greater Lowell by a score of 16-45. With their 1-1 record on the day, the Rams are now 1-5 on the season.

Prior to Wednesday’s tri-meet, the Rams had suffered their four losses on the season by one, three, six and seven points, respectively. But with several outstanding efforts on Wednesday, the results were never really in doubt, as Shawsheen took four of the first five positions against the Vikings and seven of the top ten.

For coach Pat Kelly and the Rams, it was great to get that first win of the season after so many close calls.

“It really was great to get that monkey off their back,” Kelly said. “They have been running so well all year, not even just our top seven, but really our top 12, have been so much better than anticipated, but we just haven’t been able to get a win, so it was great to see them do it.”

Sophomore Will Biscan of Wilmington followed close behind in a personal best time of 20:48, which was good for third place, while freshman Noah Brooks of Tewksbury had a personal best of 21:25 to earn a fourth place finish. Senior Connor Pyles earned a seventh place finish in a time of 21:52, while Ethan Zadig was eighth in 22:06 and Matt Fricke was ninth in 22:40, all of which were personal bests.

That continued a theme of the season where so many Rams are achieving personal bests each time they take to the course.

“They are all working really hard and that is why they are having that success,” Kelly said. “Not that I haven’t enjoyed coaching all my teams, but this is absolutely one of my favorite teams to coach. And that starts with having Adam (Ippolito) doing what he does. He goes out and works hard every time and that inspires the other runners. If they see him doing it, they feel like they should do it themselves. And then they also see the success they are having because of the hard work,”

Against Greater Lowell, unfortunately for the Rams, the outcome was never in doubt either, as the Gryphons took the first four spots in the race, led by Ryan Plowman in a time of 19:07. The four Gryphons runners finished nearly simultaneously, with Albert Ferrers, Devin Moreau and Brendan Quealey all finishing in 19:08, narrowly edging out Noble’s fifth place finish in 19:09.

Noble’s effort against the Gryphons, while it fell just short, was phenomenal. With the top four Gryphon runners leading the pack the entire way, and basically running as a group of four across, they were looking to coast to the finish line in much the same manner, but Noble was having none of that, as he turned on the jets down the stretch before coming up just two seconds short of catching the pack.

“Gordon did such a great job, and he almost caught them at the end,” Kelly said. “That would have been great if he did, but I was still pumped with the effort and with the way he made them work right to the end.”

The Shawsheen Girls Cross Country team also picked up an impressive win over Nashoba Tech, earning a 17-43 victory over the Vikings, while falling to Greater Lowell by a score of 20-29. The 1-1 day evened the girls record at 2-2 on the season, as they got several outstanding individual efforts, including the return of number one runner, senior captain Devin Sweeney, who took first overall against Nashoba Tech.

“We had a couple of injuries to the girls,” Kelly said “We lost Kaylee (Gaffney) to an injury during the race, but that allowed some other kids to step up and score some points for us and they did a great job helping us get the win.”

One of those that stepped it up the most was freshman Amelia Matzke who took second against Nashoba Tech. Matzke was a late addition to the Rams, joining the team just a few weeks ago, but she has had an immediate impact.

Again, much like the boys, things were much different against Greater Lowell, with the Gryphons taking four of the top five spots, led by star senior Tealei Chandonnet in a time of 21:58, and Dianna Marquez in 22:17. Sweeney, however, acquitted herself well against the Greater Lowell stars, taking third place with her 22:29 finish.

“Devin did a really great job,” Kelly said. “She was pushing their top two runners the entire way, and she ran a great race.”

Sweeney’s strong finish also prompted Kelly to appreciate the crowd support that all of the Shawsheen runners received during the race. Cross country is not always the most popular spectator sport, but at Shawsheen the Rams received great support from their fans.

“We had a great crowd,” Kelly said. “At the end of the race, the girl from Greater Lowell who finished second, said ‘Great race Devin’, and said she knew her name was Devin because of the number of people she heard yelling her name during the race. That was great sportsmanship, and it was also great to hear how much support our kids are getting.”