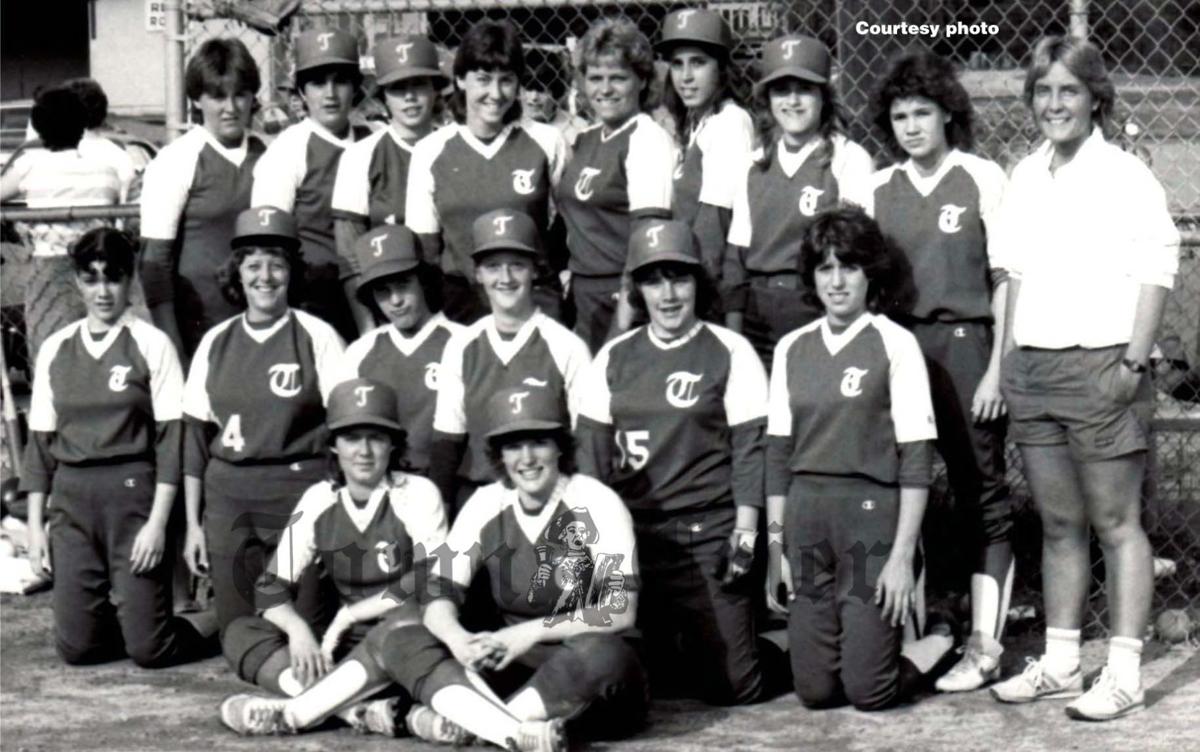 The 1984 Tewksbury High School softball team co-captained by Missy Riddle and Heather Coyle and coached by Donna Tanner, made it all the way to the State Championship game. Missy Riddle was inducted into the TMHS Athletic Hall of Fame in 1999. She is sitting on the right with Coyle on the left. (courtesy photo). 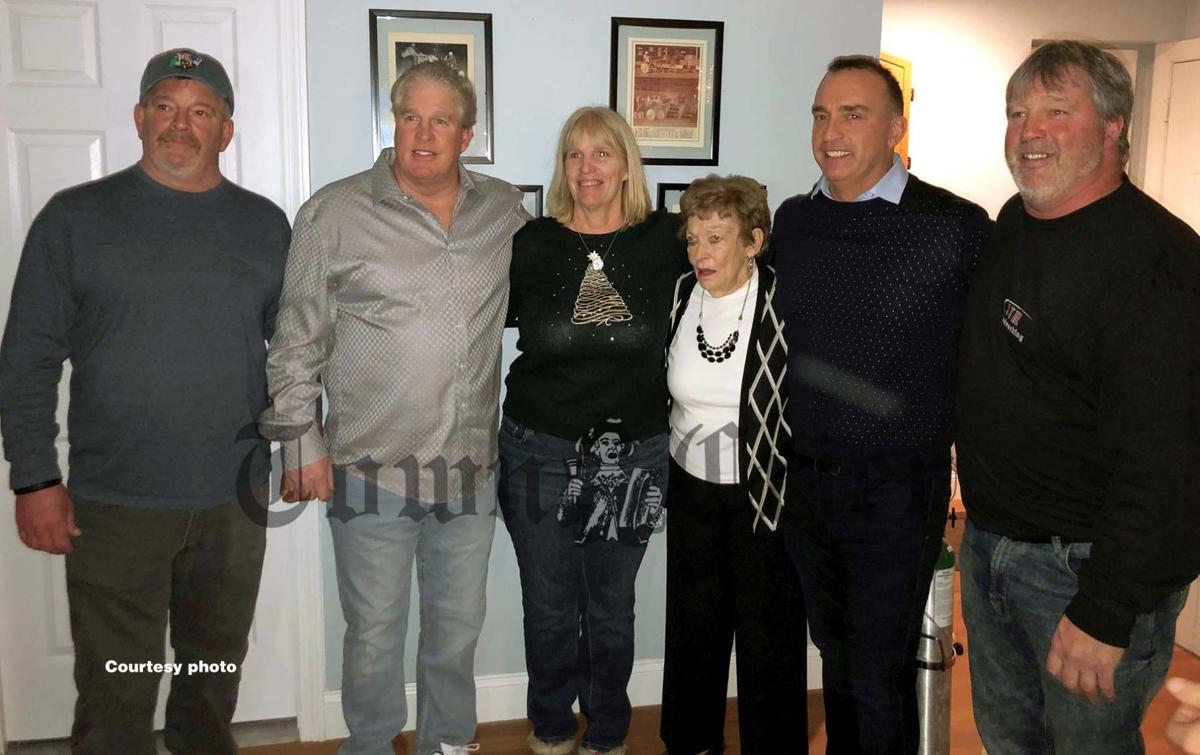 The Riddle family today is left to right, Matthew, Mark, Missy, mom Eleanore, Peter and John. Another brother, Luke, and dad James, each passed away several years ago. (courtesy photo).

The 1984 Tewksbury High School softball team co-captained by Missy Riddle and Heather Coyle and coached by Donna Tanner, made it all the way to the State Championship game. Missy Riddle was inducted into the TMHS Athletic Hall of Fame in 1999. She is sitting on the right with Coyle on the left. (courtesy photo).

The Riddle family today is left to right, Matthew, Mark, Missy, mom Eleanore, Peter and John. Another brother, Luke, and dad James, each passed away several years ago. (courtesy photo).

Eleanore Riddle is 82-years-old now and watching over her many children and grandchildren. Eleanore and her husband Jim together raised a busy, very athletic household that was always bustling with five sons and a daughter in a house filled with trophies and enough sports gear to stock any sporting goods store. Competition was always fierce in the Riddle household, and the one girl in the family had no trouble keeping up athletically with her brothers. There was Matt, Mark, John, Luke and Peter. There was always plenty of wrestling, football and baseball talk. In later years Peter would add marathoning to the list of athletic events that the Riddle family excelled at.

No one ever forgot how good the one daughter in the Riddle brood was at any sport she ever played. That little girl could more than hold her own athletically in the Riddle family. Even at four-years-old, Missy Riddle could compete with any athlete — boy or girl — in their Tewksbury neighborhood.

“I used to tell the boys that you can’t go out and play sports if you don’t take your sister,” remembers mom Eleanore. “She would be out there playing with the boys when she was four-years old. They would always let her come up to bat once. She would strike out, but she would come up to bat. Then the first year that the Tewks­bury Little League took girls she was playing when she was nine-years-old.”

Fast-forward to Tewksbury High School in 1984, when varsity catcher and co-captain Missy helped the Redmen softball girls all the way to the Eastern Mass Championship game.

Riddle won every athletic award imaginable that year while playing varsity field hockey, basketball and softball. She was named all-conference in all three sports and topped off her senior year as the school’s Most Outstanding Athlete.

The little girl tagging along with her brothers and getting that one at-bat was doing a lot more than just striking out. She had become one of the best athletes ever at Tewksbury High School. Missy is a TMHS Athletic Hall-of-Famer. Her call to the hall of fame came in 1999, and it surprised no one. Missy was one of the fiercest competitors ever at Tewksbury High School. She wanted to be the best. And she was.

Most of Missy’s memories of her high school years are of her teammates and her coach. Like most great athletes, humility is paramount and the ability to learn from practicing and competing carries on to life today.

“One of my favorite memories was in my senior year when we came back to beat Woburn in the first round of the State Tournament,” she said. “Woburn had knocked us out of the tournament the year before. My proudest moment was being re­cruited to play softball at Keene State College, which at the time had a Division Two program. For me, it was validation for a lot of hours of practice.

“My Tewksbury High School softball coach Donna Tanner taught me many things, but two things that stood out the most was that good things come to people who work hard. She also taught me how to be a leader. This carried over through college and my work today.

“I remember one game where my brother Mark and his friends came to a basketball game. This was very unusual, since I was the second youngest in the family, so my older brothers never had time for my high school games. I had the best shooting night of my career that night. After the game, Coach Barry Sheehan said that my brothers must come to my all games from now on.

“I had many great memories, but the one memory that really sticks out was that we had to play the state final game on the same day of high school graduation. Unfortunately, the game didn’t end in our favor.

“After graduating from college in 1988, I landed my first accounting position with Goody, Clancy and Associates in Boston. This is where I met my husband of 25 years Chris, who was the computer consultant for GCA and my bosses’ brother. I worked there for 19 years. I’m now the finance manager for a small architecture firm, MPDL Studio in Boston. I have been working there since 2007. I’ve been working from home because of COVID-19. I like not having to commute, but I miss the office environment.”

For Missy, work is a distant second to raising a family. Missy Riddle Dunn and husband Chris have a daughter Lydia, who at 21 recently graduated from Rutgers University. Son Craig is playing varsity baseball as a pitcher at WPI, and was red-shirted last season as he recovers from Tommy John surgery.

Riddle’s humility is front-and-center when she talks about a particular moment at Tewksbury High School. This great high school athlete was more than willing to help her high school friends when she wasn’t busy being an all-star athlete.

“I was the pocketbook holder for the high school football cheerleaders on game day. They would march on the field before game and they couldn’t carry their own pocketbooks, so I did it. The best thing that came out of this is the friendships that I made and are still a big part of my life today.

Today Missy looks to an active future with friends and family. You can bet that that there will be more than a little competition tossed into the daily mix. It’s hard to picture Missy not trying to the best at anything she attempts. Still, with age and experience comes the idea that there should be plenty of time for taking it easy.

“I enjoy playing golf, snowboarding, hanging with Chris and the kids, exploring faraway places, spending time with my high school and college friends and walking my crazy, energetic dog. My hope for the future is to be happy and healthy, to be able to watch my kids grow into wonderful adults and to grow old with my husband.”