From left, Jen Schacht, Fil Faria and Kevin Cormier, all completed a “virtual marathon” here in Tewksbury, after Faria’s planned marathon competition in Kansas was cancelled due to the coronavirus. He has competed in a marathon in 44 of the 50 states in the country.     (courtesy photo). 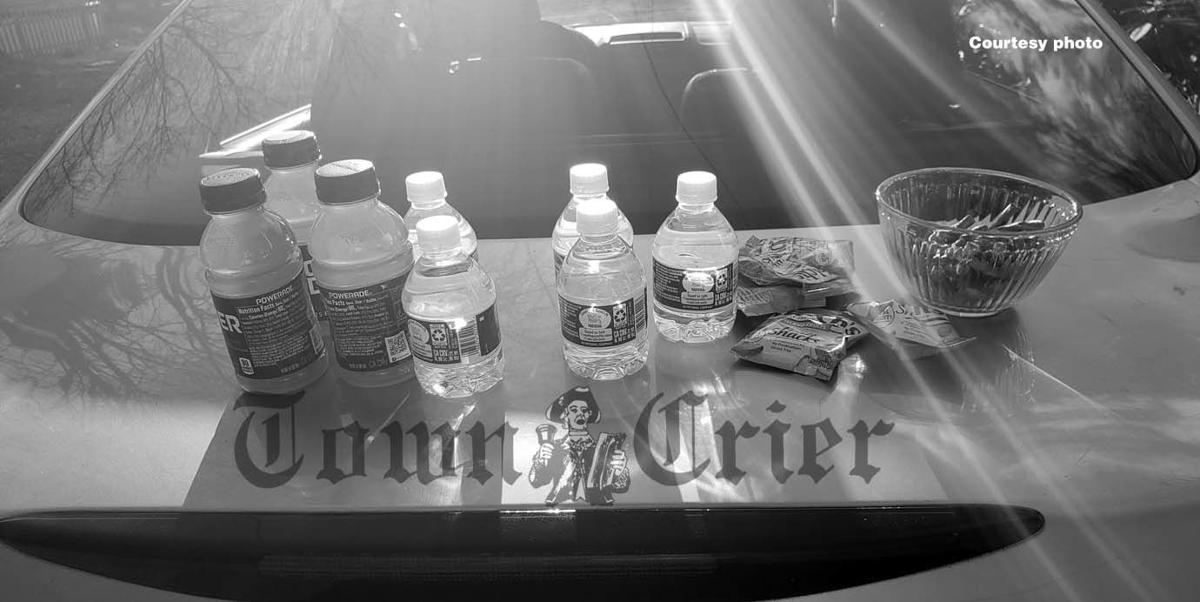 The rest stop for Phil Faria and his friends competing in a virtual marathon was the back of a car, filled with various drinks and snacks.     (courtesy photo).

From left, Jen Schacht, Fil Faria and Kevin Cormier, all completed a “virtual marathon” here in Tewksbury, after Faria’s planned marathon competition in Kansas was cancelled due to the coronavirus. He has competed in a marathon in 44 of the 50 states in the country.     (courtesy photo).

The rest stop for Phil Faria and his friends competing in a virtual marathon was the back of a car, filled with various drinks and snacks.     (courtesy photo).

TEWKSBURY — The coronavirus pandemic has put a halt on just about every sporting event or large social gathering in the world for the time being.

It has even put a stop on Fil Faria’s plan to run a marathon in all 50 states.

Around this time last year, Faria, 55, had ran a marathon in 40 states.

Over the course of the calendar year, he has ran in an additional four states: Idaho, Michigan, Wyoming, and South Dakota bringing his total to 44.

This past weekend, Faria and a few of his friends were supposed to be in Kansas; that would’ve marked the 45th state he’s run a marathon in.

“The race director was going to keep it planned as scheduled, unless the city revoked its permit,” Faria said.

The plan was to fly down on Friday, run the race on Saturday, and return home Sunday night.

That, unfortunately, was cancelled.

“I was a little bummed, but with everything that was going on, and with most of the other marathons across the country cancelled, I knew that it was just a matter of time,” he said.

At the time, Faria had been training for both the Boston and Kansas Marathons. He was running about 150 to 200 miles a month.

You can imagine how upset a hardcore runner like Fil would be. But, not all hope was lost for Faria, though. The race director sent out an email saying that if runners wanted to, the could do a “virtual marathon.”

So like any devoted runner would, Faria took up the offer, and planned out a marathon in Tewksbury.

“I had some friends run with me, that way you are not running alone,” he said.

He and his buddies started on the course by his house off of Livingston Street, and down some back roads they went.

“It was a little easier, felt like a training run,” he said.

Along the way, Faria kept track of his time and distance on his Garmin Watch, the ‘virtual’ component of the race, if you will.

The runners eventually got to Main Street, ran down Route 38, and then over to Libbers Brook over by Salem Street. By mile 3, they had set up a water stop.

“The race is always better with water,” he laughed.

The group had eventually made back on to Route 38 before heading home. Although this marathon was at home, Faria still had support.

“There were a couple fans — family, friends, and neighbors; it was nice,” he said.

At this point, Faria ran a total of 6.5 miles. So after a quick water break, he went out three more times to get to 26.2 miles.

“The fourth loop was definitely harder,” Faria said. “But, there was no pressure, time wasn’t a big deal, [my buddies and I] chatted the whole way.”

When it was all said and done, Faria finished the race with a time of 3:51, while keeping a safe and social distance from everyone that was outside this weekend.

“It was a pretty good pace, the splits were similar, [the marathon] wasn’t bad at all,” he said.

Faria took a screenshot of the map and times and sent it to the race director in Kansas.

Although this doesn’t count for Fil, he will be getting a medal and a t-shirt in a couple weeks.

Once it’s safe to do so, Faria hopes to get back to on track and finish what he started.

“Hopefully things can get back to the way they used to be, or at least as close possible,” he said.

But for now, he hopes that his friends in the running community and beyond are safe during this unprecedented time.