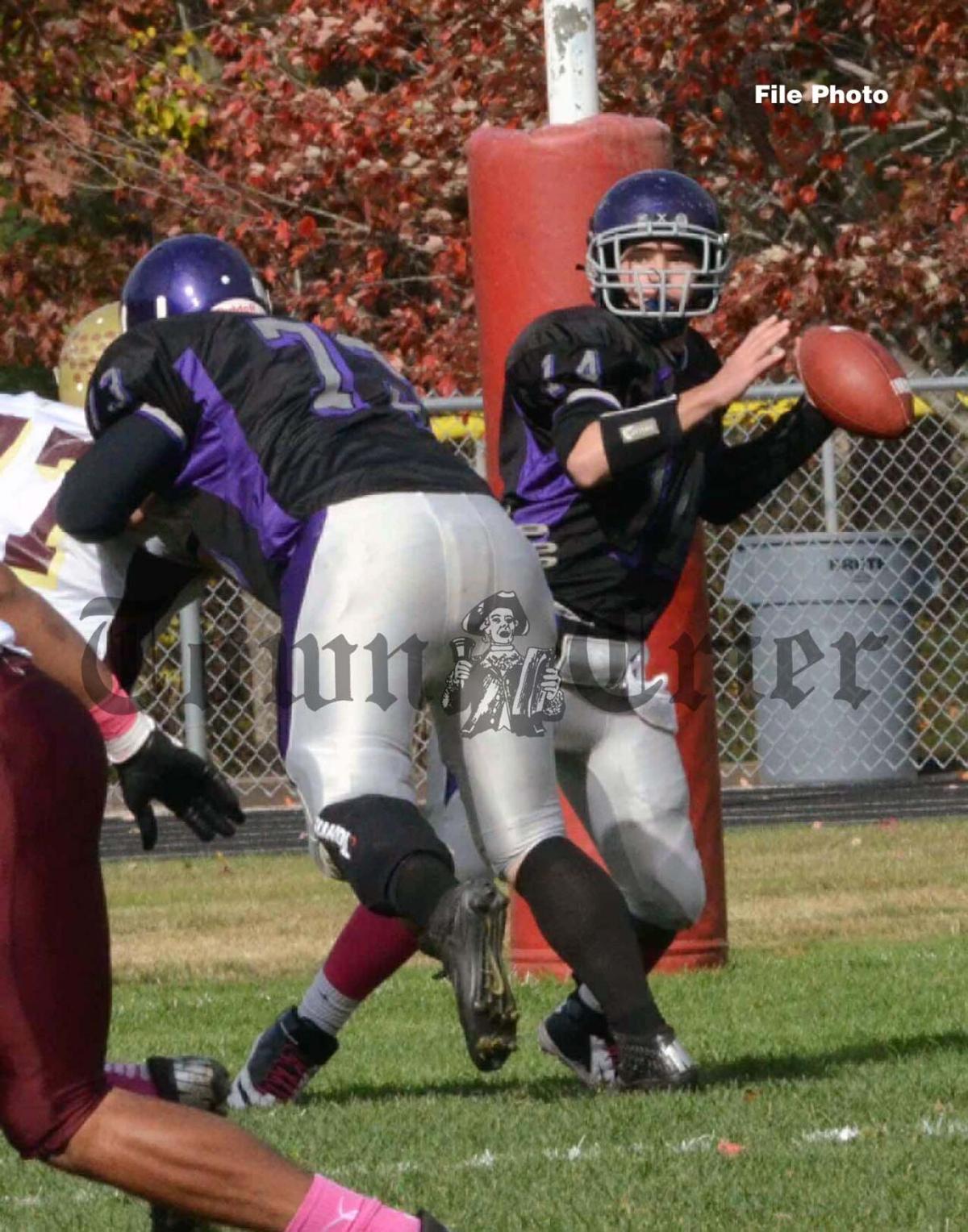 Back in 2013, Alex Tate had a superb season as the QB for the Shawsheen Tech Football team. He is among the chosen players to our All-Decade team.       (file photo). 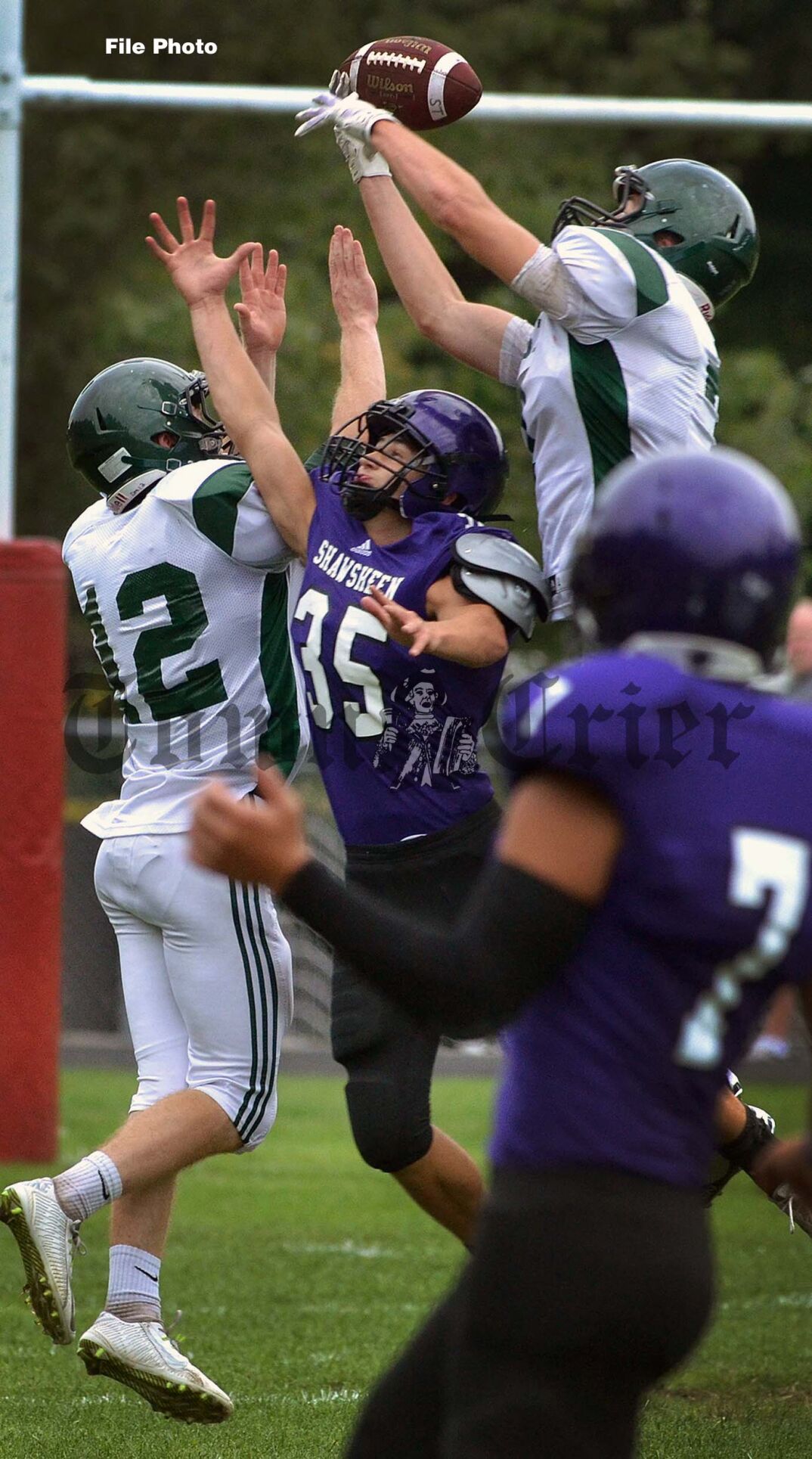 Shawsheen Tech wide receiver John Reynolds of Wilmington, shown here during the 2014 season in a game against Austin Prep, is one of the selected players to the Town Crier's All-Local Shawsheen Tech Football Alll-Decade team. (file photo).

Back in 2013, Alex Tate had a superb season as the QB for the Shawsheen Tech Football team. He is among the chosen players to our All-Decade team.       (file photo).

Shawsheen Tech wide receiver John Reynolds of Wilmington, shown here during the 2014 season in a game against Austin Prep, is one of the selected players to the Town Crier's All-Local Shawsheen Tech Football Alll-Decade team. (file photo).

BILLERICA – As we have seen over the past several weeks when picking the All-Decade teams for Shawsheen Tech, the school has built a great tradition of winning programs with many of their teams, both boys and girls.

The Rams Football team is no different, as they are coming off a decade of great success under the di­rection of coach Al Cos­tabile, winning five CAC titles and one Super Bowl title, while advancing to three state vocational championship games, com­ing up short each time.

The Rams started off the decade with one of the best teams in program history, winning the 2010 Di­vision 4 Super Bowl over Blue Hills Regional and finishing the season with a record of 11-1. They followed that up with two more CAC championships in 2011 and 2012, although they lost in the first round of the playoffs each time. They won two more league titles in 2017 and in 2019.

Overall, the Rams posted a 73-41 record for the dec­ade and are now 147-95 under the direction of Cos­tabile over the past 22 years. Shawsheen also con­tinued another winning tradition over the past decade, as they continued their dominance over Thanks­giving Day rival Greater Lowell, winning eight straight turkey day matchups from 2010-2017 to run their overall winning streak in the matchup to 17 games, be­fore Greater Lowell withdrew from the matchup prior to the 2018 season.

Of course, many outstanding athletes contributed to the Rams great success over the past decade, in­cluding many from Tewks­bury and Wil­mington. Listed below is the Town Crier’s All-Dec­ade Football team, made up exclusively of Tewksbury and Wilming­ton players. As we have stated for each of our All-Decade selections, there were some very tough omissions when picking a team like this, including many outstanding and de­serving players from Bed­ford, Bil­lerica and Bur­lington, but we here at the Town Crier felt that limiting our teams to Tewksbury and Wilming­ton players was the best way to honor our local athletes.

QB – Alex Tate (Tewks­bury) – The lefty signal cal­ler was a three-year starter for the Rams, and threw for 1,031 yards and 16 touchdowns in his senior year of 2015, including 268 yards and five TD’s in a 35-7 win over Greater Lowell. In his junior year, he threw for 738 yards and six touchdowns on the season while leading the Rams to four straight wins to close out their season with a winning record. He is also a member of the Rams All-Decade Baseball team as a pitcher.

QB – Ryan Woolaver (Tewksbury) – Only one of Woolaver’s seasons with the Rams qualifies for the decade, but 2010 have been the most memorable season in Rams Football history, as it finished with a Super Bowl win over Blue Hills. Woolaver was injur­ed just before halftime of the title game, but in guiding the Rams to the Bowl, he had thrown for a Di­vision 4 leading ten touchdown pas­ses, while rushing for an­other four. He is also a member of the Rams All-Decade Lacrosse team.

RB – Billy Tamboli (Tewks­­bury) – In his senior year of 2015 Tamboli had an outstanding season for the Rams, averaging six-yards per carrying while rushing for 904 yards and seven touchdowns, earning Lowell Sun First Team and CAC All-Star honors. He was also outstanding on defense that season, with a team high 59 tackles, along with in­terception, which he re­turned 58 yards for a touchdown.

RB - Diondre Turner (Tewksbury) – As a junior in 2019, Turner averaged seven yards per carry while rushing for 1,028 yards and 13 touchdowns and leading the Rams to a 10-2 record and the CAC championship. Turner also hauled in 14 receptions for 202 yards and returned a kick for a score, all of which added up to his being selected as a Lowell Sun First Team All-Star and the CAC Co-MVP. He was also outstanding as a defensive back, where he had 56 tackles, three forc­ed fumbles, three fumble re­coveries and two interceptions.

WR – John Reynolds (Wil­­mington) – A two-year starter for the Rams, Rey­nolds had 28 receptions and four touchdowns for 393 yards in his senior year of 2014, including 95 yards and a touchdown in a Thanksgiving Day win over Greater Lowell. Rey­nolds, who was a Lowell Sun Second team and CAC All-Star that season, also handled kicking duties for the Rams throughout his career.

TE – Devin Summiel (Tewksbury) – Summiel had tremendous success throughout his career, helping the Rams to a Su­per Bowl win as a sophomore and a CAC championship as a junior. As a senior in 2012 he had 25 catches for 426 yards and six touchdowns, including 104 yards and two touchdowns on Thanksgiving. Summiel went on to have a record breaking career as a wide receiver at Fitch­burg State.

TE – Brendan Studley (Tewksbury) – The multi-talented Studley could just as easily have made this team as a defensive end, where as a senior in 2017 he had 45 tackles and three fumble recoveries. But he gets the nod here for his work on offense, where as a senior he had 14 catches for 190 yards and three touchdowns, including a touchdown catch on Thanks­giving Day.

CTR – Edwin Ortiz (Tewks­bury) – A captain in his senior year of 2017, Ortiz was a three-year starter for the Rams and anchored an offensive line that led the Rams to two vocational championship game appearances and a CAC title in his senior year.

OL – Andrew Langone (Tewksbury) – A three-year starter for the Rams, Langone was a key member of the Rams team that won the CAC title when he was just a sophomore in 2012, even starting in the Rams playoff game that season.

OL - Alex Regan (Tewks­bury) – Another three-year starter for the Rams on both the offensive and defensive line, Regan was a captain in his senior year of 2015, when he helped lead the way for both quarterback Alex Tate and running back Billy Tamboli to have outstanding seasons.

OL – Joe Steen (Wil­ming­­ton) – Steen was a two-year starter for the Rams, and a captain in his senior year of 2013. As a junior in 2012, he helped lead the Rams to the CAC title and a playoff appearance.

DE: Chris Lucas (Tewks­bury) – A two-time CAC All-Star, Lucas was a three-year, two-way start­er for the Rams. As a junior in 2016, Lucas was a disruptive force, with 79 tackles, three sacks and a fumble recovery. As a senior, he moved off of the offensive line to play tight end, but still excelled on de­fense with 35 tackles, one sack, one forced fumble and two fumble recoveries.

Offensively, he consistently opened huge holes in the middle of the offensive line for the Shaw­sheen running game and was a strong pass blocker. On defense he was a force, finishing second on the team with 72 tackles, along with a team-high nine sacks, two fumble recoveries and five pass deflections, earning CAC All-Conference and Lowell Sun First Team honors.

DL: Scott Burke/Kevin Burke (Wilmington) – Frank­ly, we just couldn’t decide which Burke to go with here, so we went with both. Each brother was a two-year, two-way starter for the Rams, and each was a captain in his senior year, Kevin in 2014 and Chris in 2016.

DL: Omar Eldaly (Wil­ming­ton) – Eldaly made most of his history at Shaw­sheen as a New Eng­land champion wrestler, but he could play some football as well. A CAC All-Star in his senior year of 2018, he finished that season with 59 tackles, one sack and one fumble re­covery. This followed a junior year where he had 48 tackles, one sack, two forced fumbles and a fumble recovery.

LB: Mark Companeschi (Wilmington) – A three-year starter for the Rams, Companeschi was a Low­ell Sun First Team All-Star in his senior year of 2017, leading the Rams to the CAC championship with 96 tackles, three forced fumbles and one fumble recovery. This followed a junior season where he had 100 tackles.

LB: Chance Harper (Wil­mington) – After a promising junior season where he made 18 tackles, Har­per took his game to an­other level as a senior in 2016, earning CAC All-Star honors for his play at both linebacker and defensive back, but makes this team for his play at linebacker where he combined with Companeschi to make an intimidating duo for op­posing offenses.

DB: Matt Costello (Tewks­bury) – Costello was a key player in the Rams run to the 2010 Su­per Bowl title, as another player who seemed to step up when his team needed him most. After coming up with punt blocks for the Rams in key late season games against CAC rivals Greater Law­rence and Man­chester Es­sex, he came up with his biggest play of all in the Rams Super Bowl win over Blue Hills, with an interception return for a touchdown with 3:48 left in the game to give the Rams a 20-6 lead.

DB: Dave Lindsey (Tewks­bury) – Lindsey had 35 tackles, two fumble recoveries and three interceptions in his senior year of 2015. Even better, he re­turned both of those re­coveries for touchdowns, one for 62 yards against Essex and one for 87 yards against Northeast. Lind­sey was also a member of Shawsheen’s All-Decade Baseball team.

DB: Brian Neal (Wilming­ton) – Neal was a three-year starter and a two-time CAC All-Star for the Rams, and was a Lowell Sun Second Team selection in his senior year of 2014 when he had 36 tackles and a team high three interceptions. A year earlier, as a junior, he had an interception in the Rams Thanks­giving Day win over Great­er Lowell.

DB: Steve Reynolds (Wil­mington) – Reynolds was a two-way star for the Rams, and the only de­bate as to whether Rey­nolds would be on this team was whe­ther it would be on offense or defense. But he gets the call at defensive back here after a career where he made a habit of stepping up in big games, including the Rams 2010 Super Bowl win over Blue Hills where he had two interceptions, including a spectacular one to seal the win with three minutes left. The week before, in the Rams 21-0 win over Madison Park, Reynolds had come up with a key fumble recovery in Madi­son Park territory to set up a touchdown.

But what he did on of­fense also can’t be ig­nored, especially that season, when he rushed for 103 yards and a touchdown in the semifinal win over Madison Park. He followed that up the next with a 25-yard game winning touchdown with 4:57 left in the Rams Super Bowl win over Blue Hills, giving them a 13-6 lead in what would become a 20-6 victory.

Reynolds was a three-sport star for the Rams, and is also a member of their All-Decade Baseball and Basketball teams.