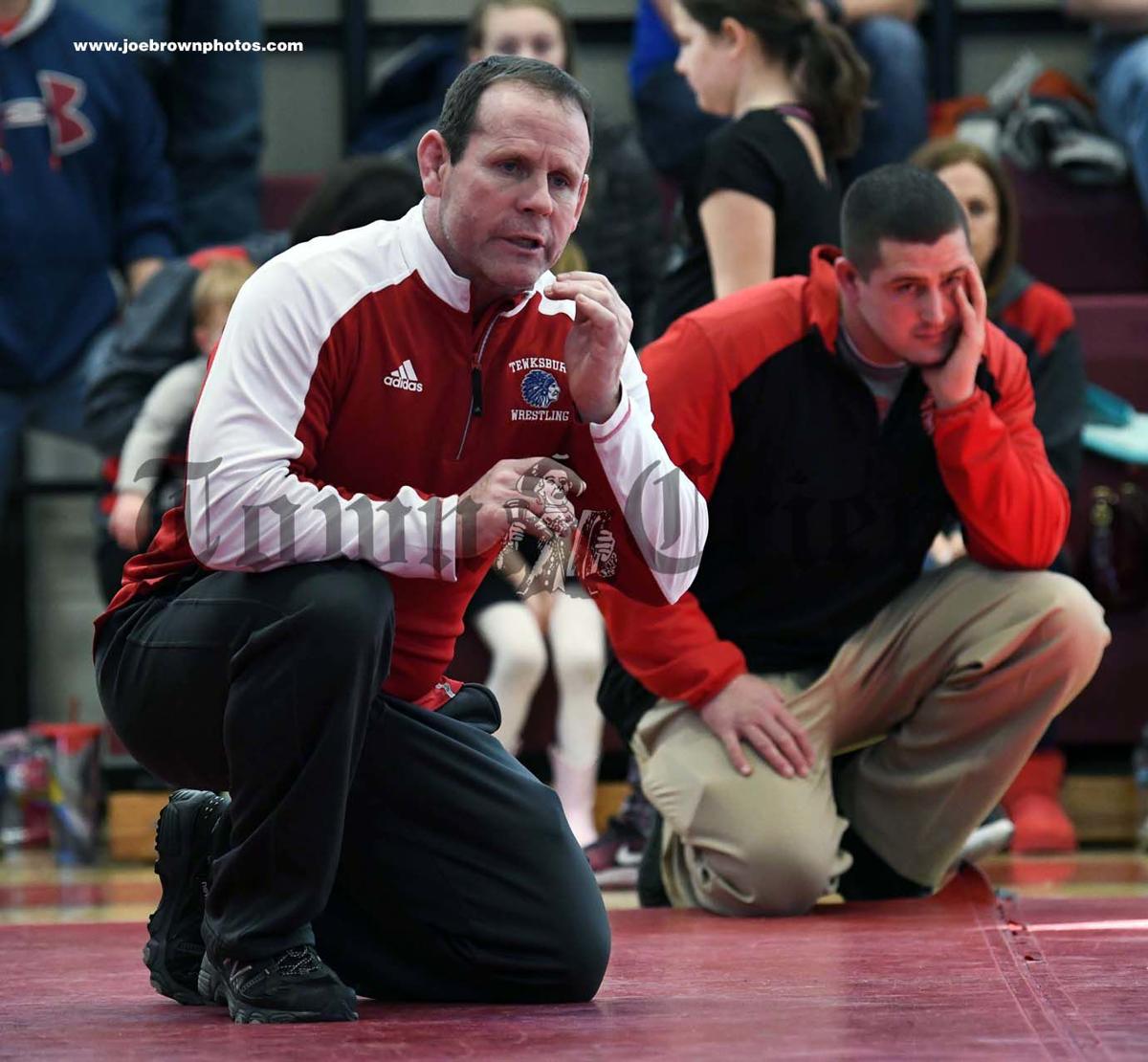 For the past eight years, Steve O’Keefe, left, has been the head wrestling coach with Steve Kasprzak as his assistant. Last Tuesday night, O’Keefe decided to step down as head coach but remain as an assistant, with Kas getting the promotion to his first head coaches spot. (photo by JoeBrownphotos.com). 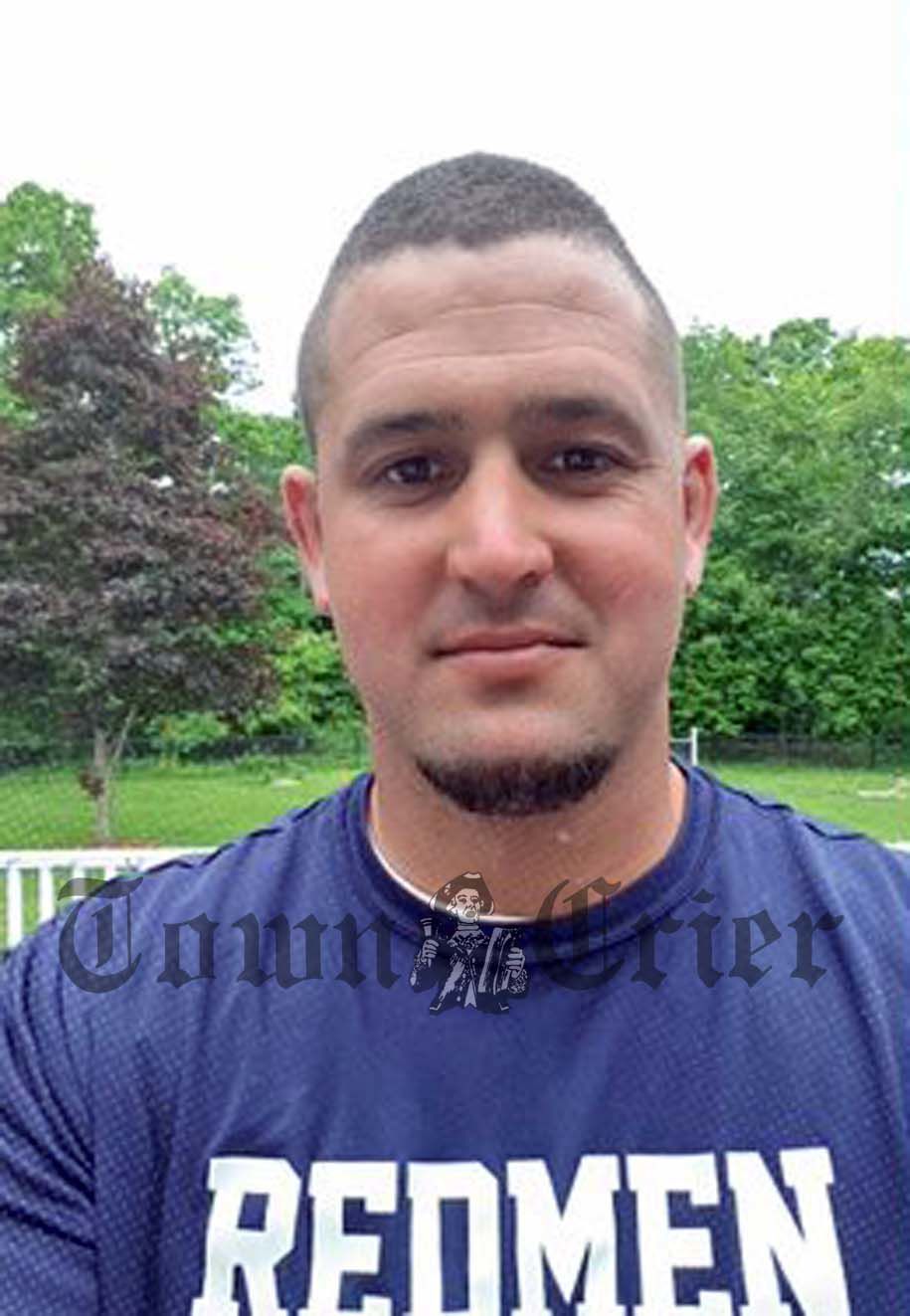 For the past eight years, Steve O’Keefe, left, has been the head wrestling coach with Steve Kasprzak as his assistant. Last Tuesday night, O’Keefe decided to step down as head coach but remain as an assistant, with Kas getting the promotion to his first head coaches spot. (photo by JoeBrownphotos.com).

TEWKSBURY – The head coaching position with the Tewksbury High Wrestling team has been the model of consistency for almost 50 years.

Starting with Jock Patterson, who had tremendous success throughout the 1970’s, to legendary Hall of Fame coach Al Donovan, who guided the Redmen for 19 years from 1983-2001, to Brian Aylward, a TMHS Hall of Fame wrestler, who led the program from 2002-2011, those three each had tremendous careers.

Over the last eight years, that consistency and commitment continued with Steve O’Keefe. Like Aylward, O’Keefe also had tremendous success wearing the Redmen colors during his competitive days before shifting gears to head coach, where he had success as well including celebrating several months ago with the program’s first league title since 1997.

No doubt running this elite program is a coveted role for any coach, and a role that requires filling some pretty big shoes. Which is why when O’Keefe decided last Tuesday night to step down as head coach, Athletic Director Ron Drouin knew that not just anybody could step into those shoes. It would take somebody who had not only the coaching ability to lead the team, but also somebody who understands what it means to be part of the Tewksbury High Wrestling tradition.

He didn’t have to search too far with longtime assistant coach Steve Kasprzak, who was immediately named the next head coach.

In Steve Kasprzak, it certainly appears the Redmen have found the right man for the job. A 2003 TMHS graduate, who had his own terrific career on the mat, Kas has been O’Keefe’s assistant for the past eight years and now the two will trade spots.

Drouin, for one, could not be happier with seeing Kasprzak elevated to the head coaching role, and is grateful for the role that O’Keefe played in making the change a reality.

“I am happy for Coach Kas. He has been a long time assistant coach for us,” Drouin said. “He has paid his dues. He has a great connection with the kids with both the football and wrestling teams. Coach O’Keefe was a big part of making this happen. He felt like Coach Kas was ready to take over as head coach. I couldn’t be happier for Kas and also that Steve is going to stay on as his assistant.”

As a former TMHS wrestler, Kasprzak was a two-time state place finisher, as well as posting over 100 career victories. While he was terrific in wrestling, he was one of the all-time great running backs in Redmen Football history. A three-year starter, he was named both the MVC and Lowell Sun Player of the Year as a senior.

He later went on to star at Worcester State, where he was a four-year starter and two-time All-Conference selection while serving as a team captain in his senior year.

Along with assisting O’Keefe for the past eight years, Kasprzak has also been an assistant coach with the Redmen Football team for the past 11 seasons, mostly working with the linebackers.

With a combined 19 seasons under his belt as an assistant coach, Kas is thrilled for this opportunity.

“I don’t think it has fully set in yet. It is something that I have wanted for a very long time, so I am very excited to finally have it happen,” Kasprzak said. “It is a little different circumstance with Steve still being here, and it is definitely comforting having him there. We have great kids in this program, so I am excited to be a part of it. We have a good history here in our sport, and I think understanding some of that history is important.”

Kasprzak has certainly experienced his share of winning as both a player and a coach for the Redmen. He hopes to do a lot more of it, but feels that taking this position is a lot more than just about wins and losses.

“I believe in all the life lessons that come along with this sport,” Kasprzak said. “It is more than just the physical aspect of the sport, but it is the mental toughness as well. Whether it is trying to make weight, or if there is a day you really don’t want to go to practice, but you push yourself through it. Wrestling is not a sport where you can hide. Once you step onto the mat, it is just you and the other guy.”

Kasprzak not only brings his own set of coaching and wrestling skills to the table, but he also benefits from having learned from working with former coaches Donovan, Aylward and O’Keefe.

“I came in at a very good time,” Kasprzak said. “My first two years I was under coach Donovan, one of the greatest coaches in Massachusetts history and then I was very fortunate to wrestle under coach Aylward. It was really the best of both worlds and then I was able to learn a lot from coach O’Keefe as well.”

Kasprzak is hoping to continue learning from O’Keefe, even as the two switch roles.

“It’s tremendous to have such a resource in the room,” Kasprzak said. “I am very happy and very lucky to have that resource available to me as I begin what I hope is a very long coaching career.”

O’Keefe for one believes that Kasprzak has all the tools necessary to be a successful head coach. He is very confident that he has left the program in good hands.

“I have watched Steve over the last several years and seen what a great coach he has become,” O’Keefe said. “He has the energy and excitement to take the kids to the next level. One of our big successes this year was having a full lineup and Steve was a big part of that. I feel like our program is heading in the right direction and Steve is the right person to continue that. Hopefully the success we had last season will help the program to continue to grow.”

A big part of that growth will of course depend on continuing to add talented wrestlers to the Redmen’s lineup. If his history as an assistant coach is any indication, that should be an area where Kasprzak can be a huge asset for the Redmen, as he has been a tremendous recruiter over the years for the team.

Kasprzak, who is a physical education teacher at Tewksbury High, downplayed his role as a recruiter, deferring much of the credit to his wrestlers, but he does acknowledge that he is hoping to continue to build his team while in his new role.

“I think our best recruiters are our senior athletes,” Kasprzak said. “If you have never wrestled before, you want to believe in your older teammates and know that they will take care of you. This past season was definitely like that, with our seven seniors being our best recruiters.

“That being said, it does help to be in the building all the time. I think it’s a good sign that the kids seem to believe in the program and are coming out for the team, so hopefully that is something the we can continue.”

Among his other coaching talents, Drouin knows that Kasprzak’s recruiting ability will be a big plus for the program.

“No doubt, Kas has a little bit of that pied piper quality in him,” Drouin said. “The kids follow him, and that is important, especially in that sport. He has done a great job with that, and I would expect that he will continue to do so.”

As Kasprzak mentioned, he is hoping that this is just the start of a long and successful coaching career at TMHS, but first things first will be preparing for the 2020-21 season. Assuming there is a season, amid concerns of the COVID-19 pandemic, Kasprzak is confident that the Redmen can follow up last year’s MVC title season with another successful season despite losing those seven valuable seniors.

“I would never want to put a bullseye their back, but I think they can have a very good year,” Kasprzak said. “They won the league title last year, so they are not going to sneak up on anybody this time around. It’s hard to say we will be as good as we were last year, but I truly believe that we can.

Drouin is looking forward to seeing what Kasprzak can do with the program, not only in his first season, but throughout his career.

“Kas knows the history of the program and he has done a great job as an assistant coach and a great job as a teacher,” Drouin said. “When (O’Keefe) decided to step down this was an easy choice for us. I am very happy for him, and he is the right guy for the job.”