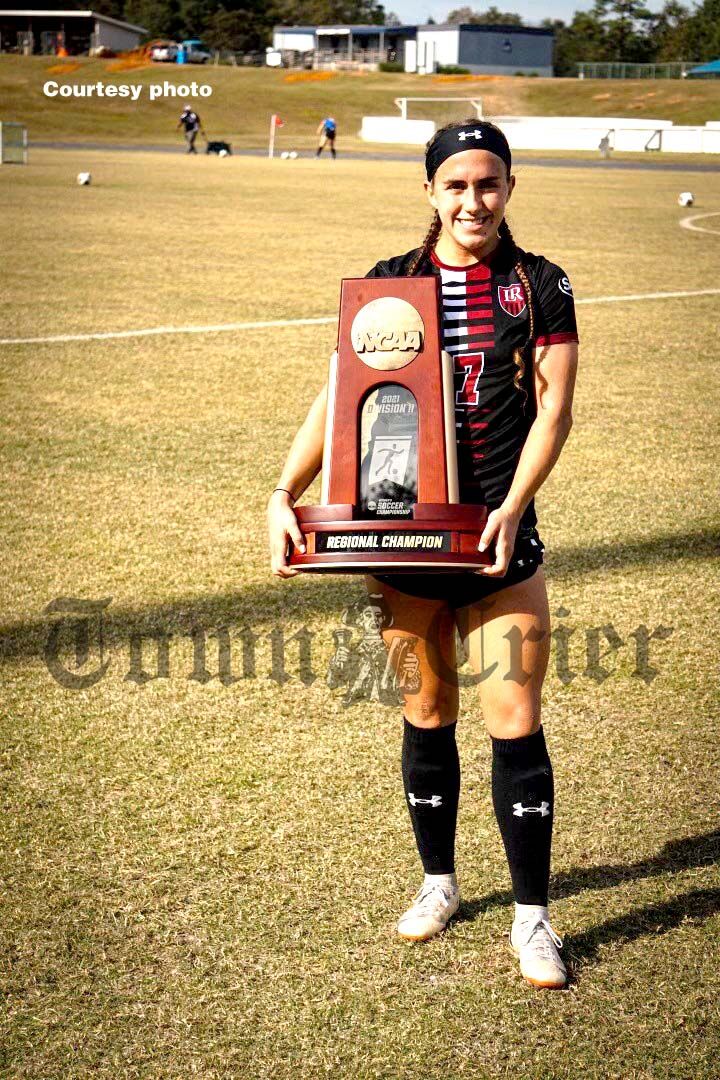 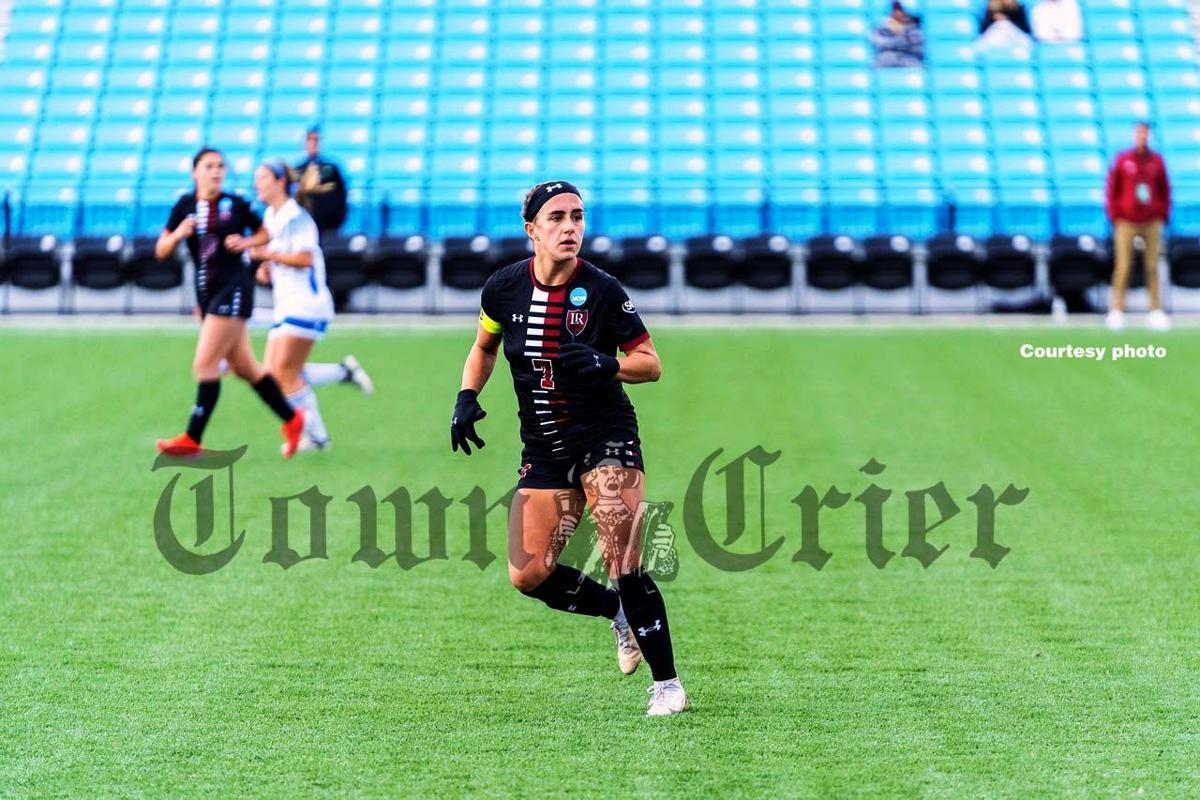 Stepanie Figueiredo, here in action from a game this past season, recently wrapped up a tremendous soccer career at Lenoir-Rhyne University. (Courtesy photo)

Stepanie Figueiredo, here in action from a game this past season, recently wrapped up a tremendous soccer career at Lenoir-Rhyne University. (Courtesy photo)

Wilmington – When Covid-19 first reached Am­erican shores in early 2020, the lockdowns and restrictions put in place by government health of­ficials in hopes of slowing the spread of the virus led to the interruption of or­ganized athletics at all levels, from youth sports to professional. This in­volun­tary hiatus proved disheartening for many, but for one former Wil­mington High School soccer athlete, “it was a bles­sing in disguise.”

Early during her junior year at Lenoir-Rhyne Uni­versity in Hickory, North Carolina, Wilmington na­tive Stephanie Figueiredo sustained a debilitating knee injury that sidelined her for the entire junior season and was immediately followed by Covid-19 shutdowns, which impacted the senior campaign. In most instances, this would have marked the end of Figueiredo’s soccer ca­reer but as she explain­ed it, the restrictions af­forded an opportunity for an extension. The delay also provided time for ad­ditional therapy.

“It was August of 2019 when I suffered the in­jury,” recalled Figueire­do. “We had just returned from a scrimmage trip to Barce­lona. We had a few more practice sessions and then another scrimmage. Six min­utes into the game, I was on a breakaway with the goaltender and landed awkwardly, tearing my ACL. After months of rehab, I was cleared to return in June-July of 2020. Thank­fully, the Covid postponement was taking place because I don’t think I would have been ready that fall.

Figueiredo, 22, perfected her craft in the Wilming­ton Youth system before moving on to the high school ranks in 2013. Along with competitive gymnastics, she participated in the town’s travel soccer program, as well as joining club soccer teams throughout her formative years, with her father Leo as coach and mother Ro­sa, leading her supporting cast.

Reaching high school, Figueiredo was quick to make an impact on the Wildcats’ fortunes, earning Middlesex League All-Star honors as a sophomore. She missed the ma­jority of her junior season with a fractured collarbone but return­ed to claim yet another League All-Star tribute as a senior, as well as an Eastern Mass All-Star award.

Figueiredo, the youngest of three, was preceded by brother Nick, who played four years of soccer at Bowdoin after attending St. John’s Prep and Matt, who was a five-year player with Salem State after graduating from Wilming­ton High School.

In 2017, Figueiredo join­ed the college ranks, sel­ecting Lenoir-Rhyne Uni­versity, which is a private school founded in 1871 and serves an enrollment of nearly 2700 students ac­ross several North Caro­lina campuses. This past May, she graduated with a Bachelor of Sci­ence de­gree in nursing and is currently studying for her Masters.

“I’m a registered nurse now and the Masters will be for nursing education,” said Figueiredo, who work­ed part-time at a nursing home in her college town of Hic­kory and is seeking to land a career with a Boston hospital. “I’m a redshirt senior, so this is currently my fifth year. After the holiday break, I’ll return in January and then finish-up in 2023. I’m looking forward to coming home. I enjoy school and obviously, soccer, but six years away from my family is enough.”

Figueiredo, who wears No. 7 on her LRU Bears jersey, impacted the soccer program from the first kickoff as a freshman. She started 18 games, played 607-minutes, and collected 7-points off 15 shots on goal. Soph­omore year was equally im­pressive with yet another 18 games play­ed, 726-minutes, and three goals scored.

Early in her junior year, however, Figueiredo was sidelined with a torn ACL.

“It has been an absolute pleasure watching Stepha­nie grow into a very strong leader throughout her college career,” said LRU Wo­men’s Soccer Coach Gary Higgins. “She had started to solidify a starting spot at the beginning of her junior year. She was playing well and had started all of our pre-season games in Barce­lona. Un­for­tunately, in our first pre-season game at home, she tore her ACL.”

What followed for this promising athlete were 544-days of rehabilitation. Fig­ueiredo overcame the setback and was eventually cleared to play in June-July of 2020. But Covid postponements delayed her return to the pitch even further.

“Covid was actually beneficial because I had more time to get my touches back,” said Figueiredo, who is typically utilized as a center attacking midfielder. “My school distributes athletic awards and I was named female comeback athlete of the year.”

Like many high schools and colleges throughout the country, LRU athletics took advantage of diminishing restrictions and re­turned to the fields in the spring of 2021 with limited schedules. Figueiredo ex­plained that the Bears competed in a “pod,” which featured home and away contests between LRU and two other schools. The Bears went on to win the South Atlantic Confer­ence (SAC) for the first time since 2012. In the midst of that success, Figueiredo signaled her return from injury by scoring a pair against Lincoln-Memorial and later assisted on the game-winner to defeat Limestone University in a SAC tournament match.

“Steph was an integral part of our SAC championship team this past Spring,” said Coach Hig­gins. “I made her a team Captain because she is fearless and was pivotal in helping the incoming freshman settle in and be successful straight away.”

When soccer resumed for the 2021 fall season, Figuei­redo abandoned her near-constant companion, a three-pound brace on her leg, and began contributing to the Bears drive for a berth in the NCAA Tournament.

In the tournament opening round against rival Cataw­ba, Figueiredo was one of three players to add a successful penalty kick to resolve a 0-0 tie after regulation. The No. 7-seeded Bears then de­feated Queens, 2-0, to punch their ticket for the Sweet 16.

LRU went on to upset 4th-seed Flagler in Pensa­cola, Florida with a 4-2 penalty-kick victory after regulation ended at 1-1. Figueiredo once again found the back of the net on her penalty try, helping her team claim the South­east Regional crown. Days later, the Bears earned a trip to the Final-Four for the first time in the 32-year team history with a penalty-kick win over Flo­rida Tech.

On December 9th, the historic LRU tournament run fell short in a 3-0 de­feat to eventual champion, Grand Valley State out of Michi­gan.

“It was pretty sweet, reaching the Final-Four,” said Figueiredo. “The game itself was a bit rough but I’m grateful for the opportunity to be part of it. And, we got another ring.”

Figueiredo wrapped up her senior year having log­ged 950-minutes, the second most on the team. She also received an Hon­orable Men­tion All-Con­ference, Third Team All-Conference, and All-SAC Tournament Team. And, of course, as a redshirt, Figueiredo will return next fall to add to her im­pressive resume’.

“Stephanie has always had leadership qualities but having to face the ad­versity of a really bad injury, definitely molded her into the leader she is today,” said Higgins. “She cares about her teammates and also about Lenoir-Rhyne Univer­sity. She represents our Wo­men’s Soccer Program with passion and determination.”