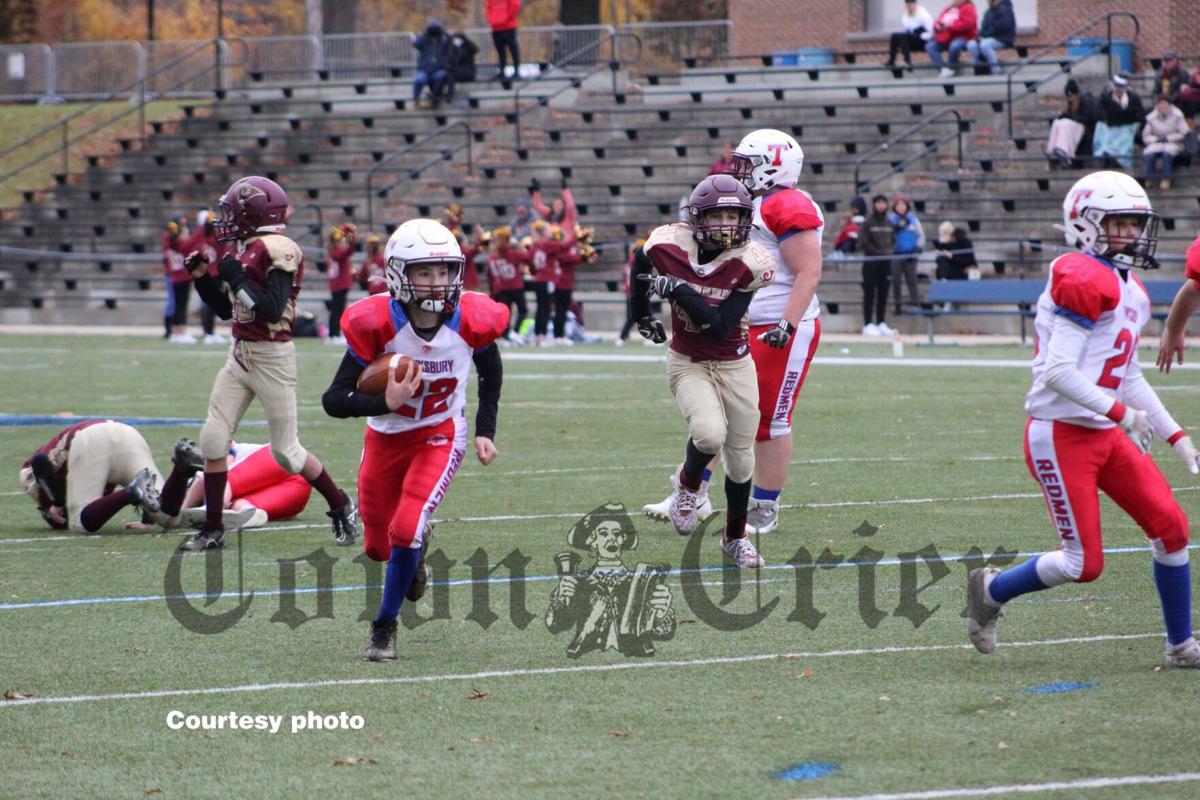 Will Harrison carries the ball as part of the Tewksbury Youth Football Sixth Grade Team’s game from this past weekend. (courtesy photo). 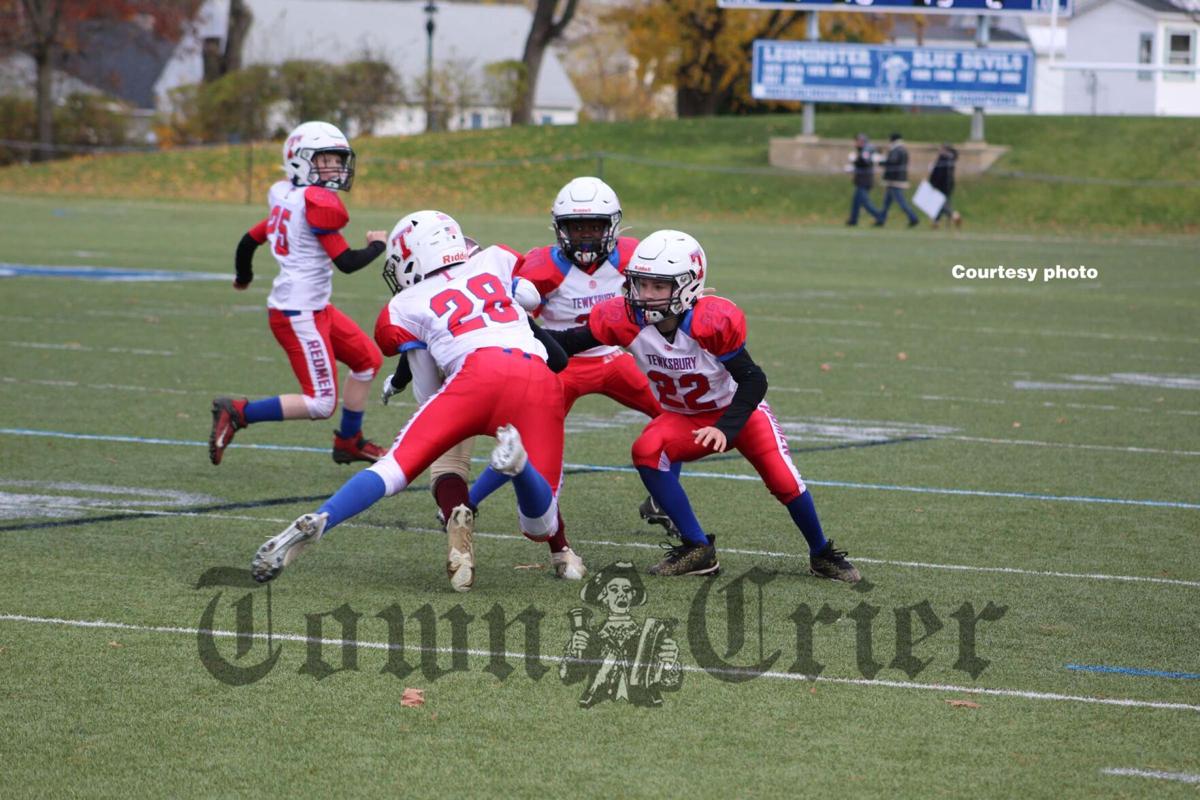 Will Harrison and Nick Colameta (28) combine for a tackle as part of the Tewksbury Youth Football Sixth Grade Team’s game from this past weekend. (courtesy photo). 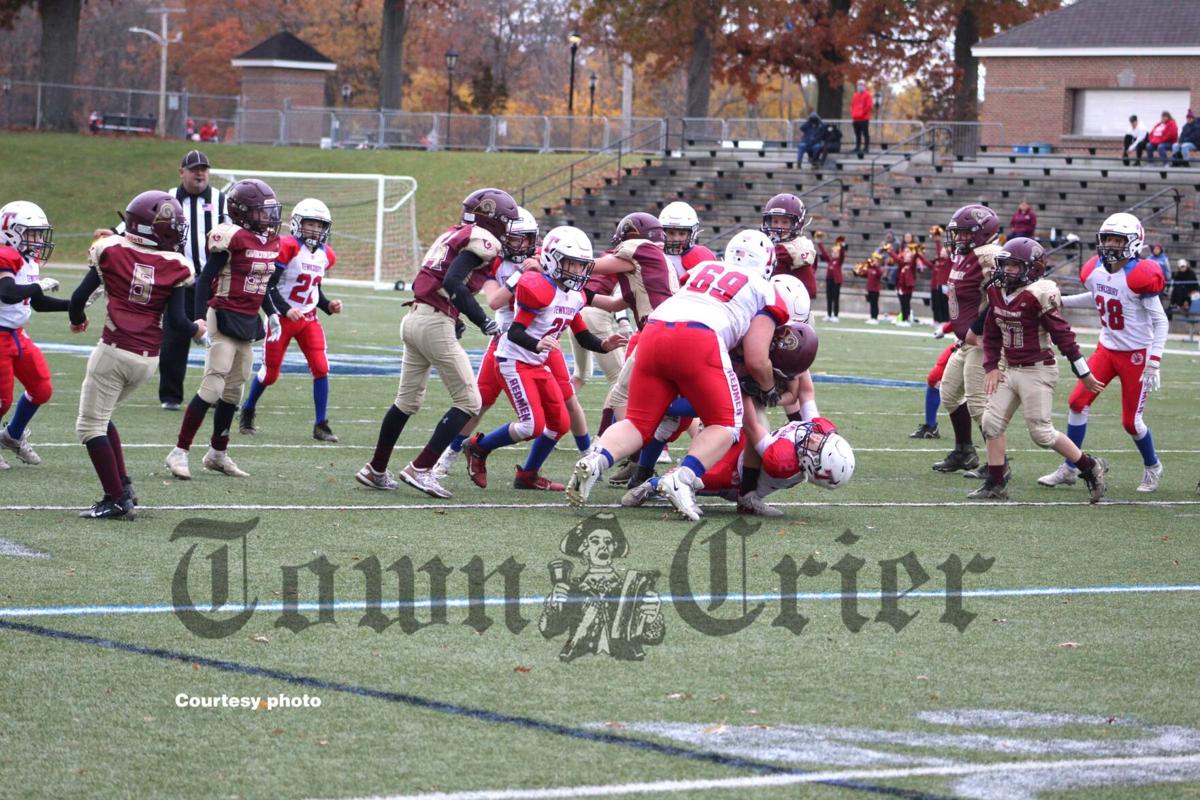 Ryan Suzon battles on the line as part of the Tewksbury Youth Football Sixth Grade Team’s game from this past weekend. (courtesy photo).

Will Harrison carries the ball as part of the Tewksbury Youth Football Sixth Grade Team’s game from this past weekend. (courtesy photo).

Will Harrison and Nick Colameta (28) combine for a tackle as part of the Tewksbury Youth Football Sixth Grade Team’s game from this past weekend. (courtesy photo).

Ryan Suzon battles on the line as part of the Tewksbury Youth Football Sixth Grade Team’s game from this past weekend. (courtesy photo).

LEOMINSTER – The Tewksbury Youth Football 6th Grade Football team had risen to every challenge before them. Regardless of the odds, or the size of their opponents, the Redmen had always managed to come out on top, on their way to posting a 9-0 record while advancing to Sunday’s Super Bowl championship game against Charlton/Dudley in Leominster.

Finally on Sunday, however, the odds and the opponent were just too big for Tewksbury to overcome, as they fell by a score of 20-12, ending their dreams of a perfect season.

“We played well,” Tewksbury head coach Mike Colameta said. “We just came out a little flat, and didn’t really completely get going until the fourth quarter. It was tough because we were playing catchup the whole game, so it is tough to come back from that, end we just ran out of time.”

The Redmen trailed 13-6 at the end of the third quarter, and when Charlton/Dudley scored early in the fourth quarter they found themselves in a 20-6 hole, which as Colameta pointed out, was just too much to overcome.

The Redmen gave it their best, however, scoring on a halfback option pass from Will Harrison to a wide open Brennan Davis in the end zone midway through the quarter to pull Tewksbury within 20-12. They would get no closer, however, as Charlton/Dudley closed out the game and took home the title.

While the loss was certainly a tough way to end the season, it certainly did not diminish the tremendous season that this group of 20 young men put together.

“We had 11 brand new players and only four returning players from last year’s team, and then we had a few kids who hadn’t played in a couple of years,” Colameta said. “We were fortunate to have some very good athletes and they had an outstanding season.”

They most certainly did. During the regular season, the Redmen had outscored their opponents 269-12, before beating Grafton 25-19 in the semifinals to earn their spot in the title game. It was quite a remarkable achievement, particularly given the team’s uncertainty at the start of the season.

“Early in the season we started to get into hitting and we started to get into a groove,” Colameta said. “And then we went to the jamboree not really knowing what to expect, but we did pretty well there. At that point we were still not sure what to expect, but we just kept working on the fundamentals with the kids and they just kept getting better.

“The kids just stayed with it, and the kids got more comfortable and confident and they had a great season.”

Colameta, who played his high school football in Everett where he was part of a Super Bowl championship team in 1998, knows the pain of losing in the big game, having lost in the Super Bowl with Everett in 1997. After the Redmen loss on Sunday, he did his best to let his team know that better days still lie ahead.

“I told them that I know how it is to lose a game like this, but we came back and won the next year. But they will have to work hard at it,” Colameta said. “I would have loved to have see this team win the Super Bowl, but I am very happy with what this team accomplished. There were 24 teams in out division, so to finish in second place is not so bad.

“We didn’t know what we had going into the season, but I couldn’t be prouder of all of these kids. On the bus ride home, there were some tears, but the first thing they said is that they can’t wait for next year to try and get back here.”