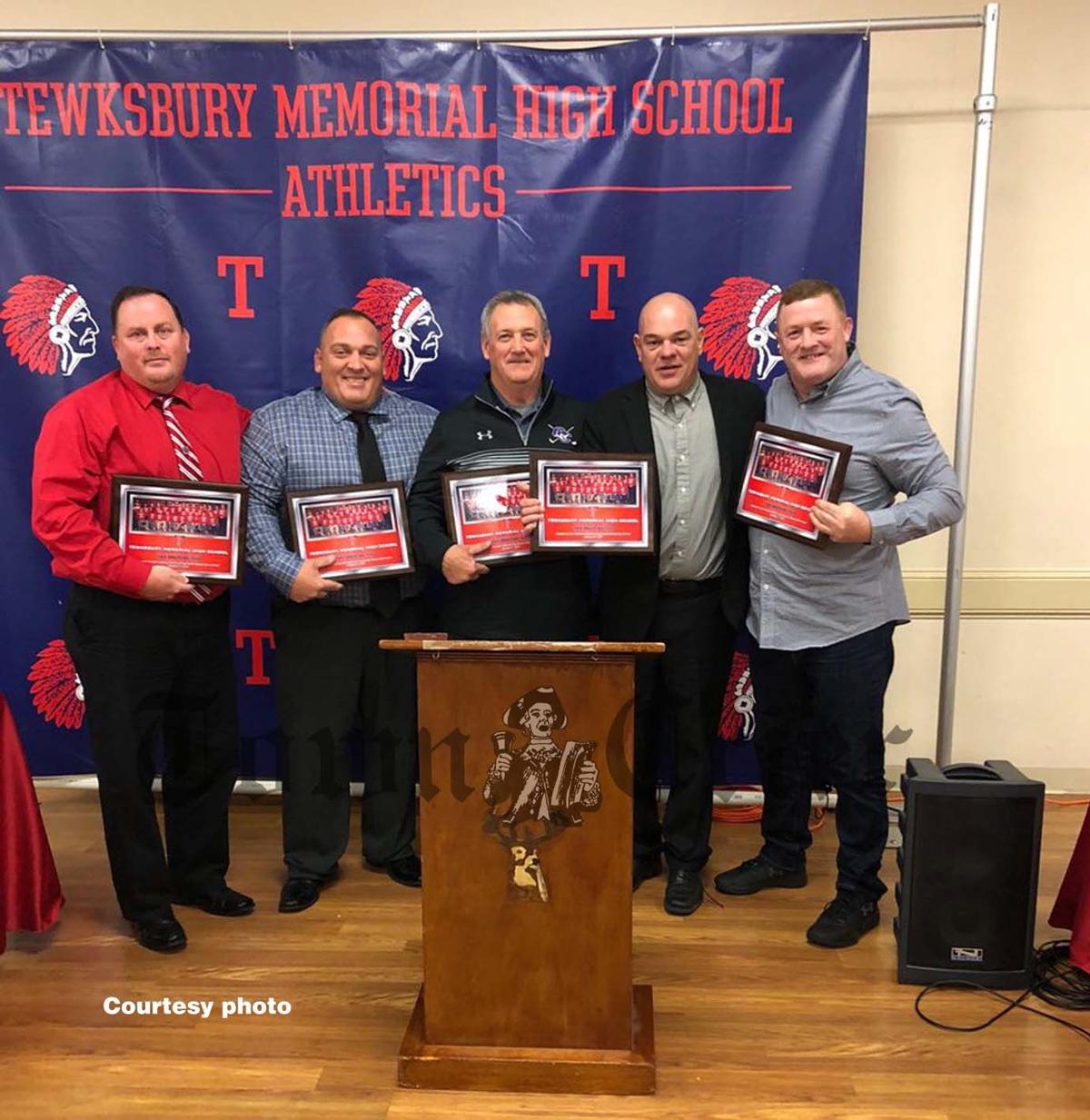 The Town Crier is starting a new series, looking back at the most elite TMHS teams from the winter season. Last week we touched on the ‘Glory Days’ with Tony Ro­mano and some of his previous basketball teams and here we look at the 1989 wrest­ling team, which got inducted into the TMHS Hall of Fame in Oc­tober of 2018. This story originally appear­ed in the October 31st edition.

As the 1989 high school wrestling season ap­proach­ed, outside obser­vers didn’t know what to expect from the Tewks­bury High Wrest­ling team. After all, while the Red­men were coming off an outstanding 1988 season where they produced three individual state champions and placed second in both the Divi­sion 2 State and New England Tour­naments, they had also lost one of those champions, Scott De­vivo to graduation. To make matters worse, two key members of the 1989 team, Tom Aylward and Keith Sullivan were both lost to injuries in the preseason.

With a talented returning cast, there was no doubt that the Redmen would still be good, but would they match the kind of greatness they had shown the year before? Most outsiders had their doubts. But one group that did not have any doubts was the only group that mattered, and that was the group of wrestlers in the room with coach Al Do­novan.

“I knew we would have a good season,” says Dave Carciofi, one of the wrest­lers who had earned a state title the year before and was returning for his senior year. “We lost Scott Devivo off the team from the year before, but hands down we knew we had the numbers to be very good. We were blessed to have quite a lot of talent coming back and I knew we would have a great season.”

Carciofi may have actually underestimated his team in the preseason. As it turns out, the Red­men did not simply have a great season, they had a historic season, winning the MVC title, the Division 2 North Section­al title, and the first and only state championship in the history of the wrest­ling program at Tewks­bury High.

It was a season that no­body associated with the team or with the school will ever forget, and last Saturday night the group was immortalized when they were inducted into the Tewksbury High Hall of Fame.

Carciofi, a three-time state champion, as well as a New England champion, who is already a member of the both the Tewksbury Hall of Fame, as well as the Mas­sachusetts Wrest­ling Coach­es Hall of Fame as an individual, was thrilled to be joined by some of his teammates on Saturday night at the Tewksbury/Wilmington Elks with an honor that he said was long overdue.

“It was really nice,” Car­ciofi said of the induction ceremony. “It was nice for Tewksbury to finally recognize the team. I had it for myself, but it was great to share this with my teammates. And it was great to see them pay tribute to our coaches, Al Donovan and Scott Trem­lett, who have done so much for the sport of wrestling in this town.”

In fact, Cariofi says that Donovan deserves more recognition than he has gotten over the years for his brilliant coaching ca­reer.

“Al was so good for this town and for this program,” Carciofi said. “In my opinion, he is behind only (Lo­well High legend) George Bossi and (Win­ches­ter’s) La­rry Tremblay in terms of great wrestling coaches in this area. He knew how to inspire kids who may have not been the best wrestlers, but he would get their best out of them. We worked harder than anyone, and I think that is why we won so many of our matches in the third period, because we were in better shape than the other teams.”

That training appeared to pay off almost right from the start of that ma­gical season. After struggling a bit at the Lowell Holiday Tournament, the Redmen rolled through the rest of the regular sea­son and continued that roll in the post season stor­ming their way through the sectionals and into the state tournament.

“We finished in the top three of every tournament we entered and then we won really big in the sectionals,” Carciofi said. “It was really an incredible run. So going into states it was incredible to have so many kids weighing in. It was a really great feeling, and Coach Donovan told us that the hard work was done and that all we had to do now was go out and win a couple of matches. We had guys who didn’t even think they could win go out there and win a couple of matches and that is why we won.”

They also won because six members of the team placed in the tournament, including Carciofi, who won the state title, winning every match except the finals by pin, Dave McCal­lom (state runner up), Tom Aylward (3rd), Joe Gen­netti (5th), Brian Smith (5th) and Abe Mills (5th).

In fact every member of the Tewksbury contingent at the meet scored points, and almost unheard to ac­complishment.

The 1989 team had al­ready been elected into the National Wrestling Hall of Fame in 2014, which was an incredible accomplishment in the eyes of Carciofi, but be­ing recognized as a team by Tewksbury High School was an honor that neither Carciofi nor his teammates will ever forget.

“I don’t think people realize how big of a deal that was to be recognized na­tionally like that,” Carciofi said. “And now to be elected into the Tewksbury Hall of Fame is quite an honor. I am so proud of all of these guys. It was just an amazing group of young guys who dedicated themselves to being the best they could be and working harder than anyone else.

“Coach Donovan used to tell us that the only way to become a champion was to work harder than anyone else and that was exactly what we did.”