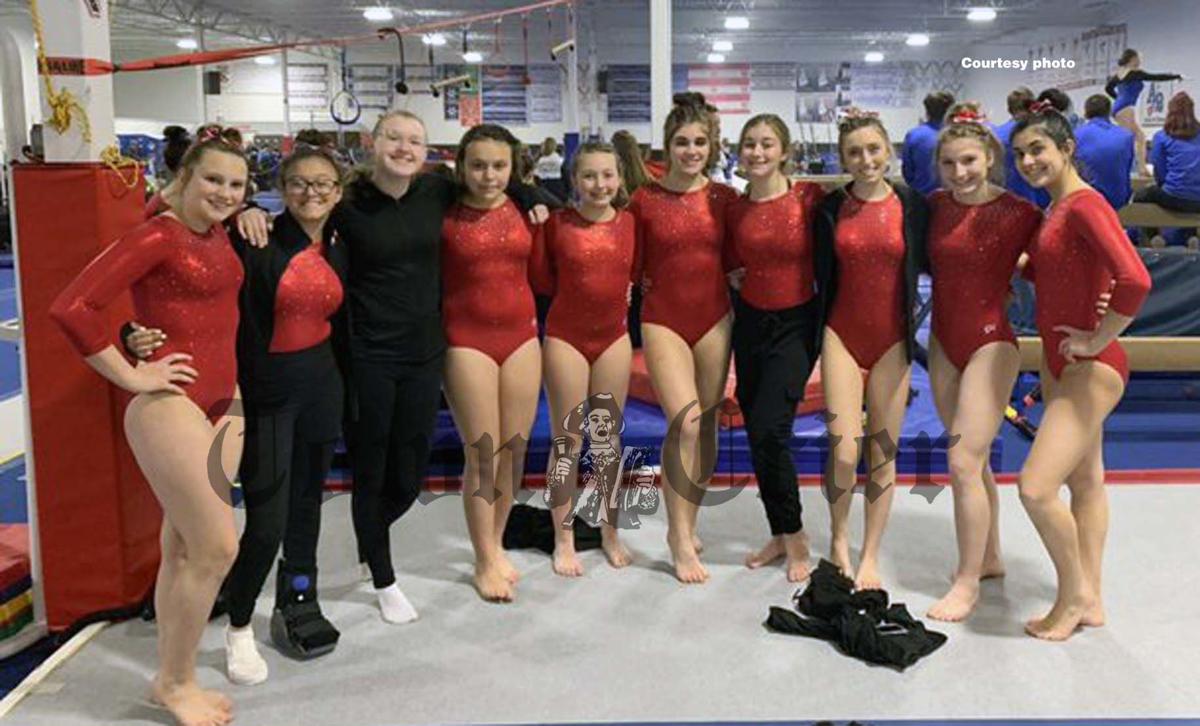 SALEM, NH – If you just looked at the team standings, you wouldn't pay much attention at all to Tewksbury. On the scoresheet, the Redmen finished in last place in the Merrimack Valley Conference Gymnastics Championship Meet held last Thursday at the A-2 Gymnastics Complex.

But in all reality, the Redmen basically had a first place kind of night. The smallest in numbers and certainly the youngest team in the league who was without an injured multi-event athlete, finished with a great score of 128.950, had an individual champion, and two all-conference selections, one a sophomore and the other is a freshman.

"The girls worked so hard and our team total score is phenomenal, especially being without one of our top athletes in Maddie Wheeler, who was out injured," said head coach Jess Wilkey. "We kept getting better as the season went on. We are a tight-nit team. They worked really hard this year. I'm just super proud and we are just so happy. This is such a great team score for us, especially having less kids than all of the other teams. And we only have two club (gymnasts). Look at all of these other teams – they all have a million kids but quality over quantity, we'll take that."

In the all-around competition, freshman Amanda Ogden, who is in her third year with the team including two years ago being crowned the vault champion, finished third with a score of 36.1, which follows finishing fourth each of the past two seasons, giving her three straight all-conference seasons.

Wilkey was certainly pleased with what she saw from both Ogden, and sophomore Isabelle Schille, who was ninth in the all-around, which included winning the beam with a 9.4.

"Amanda had her best all-around score of 36.1 and for her to do that at the championship meet is pretty awesome," said the coach. "Isabelle also had her top all-around score of the season of 35.35. That was awesome and the two of them once again led our team."

Tewksbury also had a handful of strong performances from the other gymnasts. On the vault, Jess Satterfield (8.1), Emma Cole (7.4), Julia Carlson (7.1) and Jocelyn Delorey (7.0) all put forth strong efforts.

Then on floor, Devlin had a great performance with an 8.7 and was followed by Olivia Satterfield at 7.4, Delorey at 7.25 and Carlson at 6.8.

"Alexis Devlin was strong on the beam, then on floor exercise they all did awesome so we are super proud of that. The eighth graders that we have all did an awesome job," said Wilkey.

Ogden said that this team has been special and she is grateful to be a part of it.

"I like how we're all so close," said Ogden. "We all really bond well. We may not be the best team, but we're all really close and we're all really good friends. We have improved a lot, especially Alexis Devlin and Maddie Wheeler, except she is out hurt today."