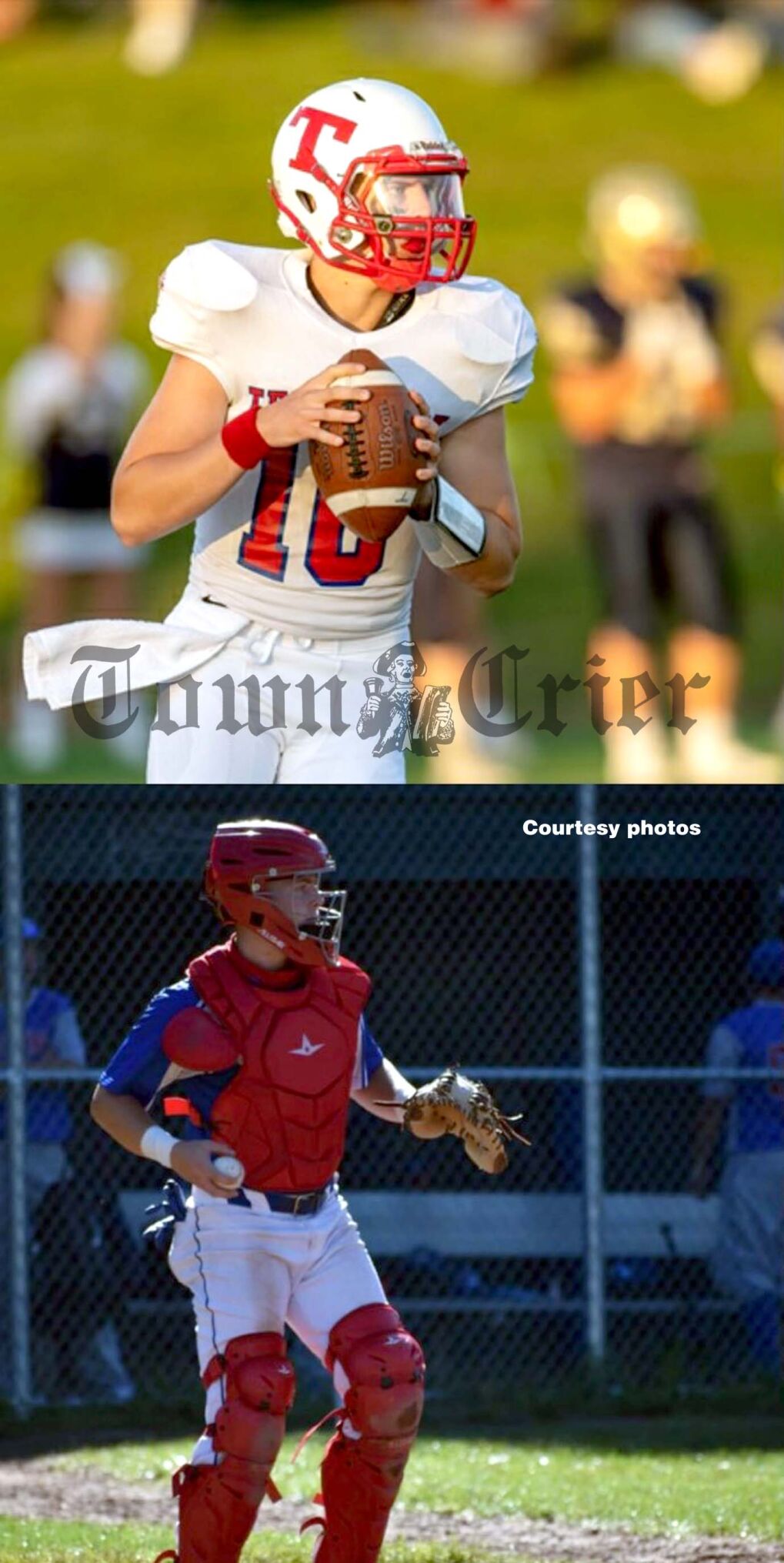 Tewksbury Memorial High School senior Ryne Rametta, shown here playing football and and baseball, will play both sports at Husson College in Maine, which he announced on Tuesday. (courtesy photos). 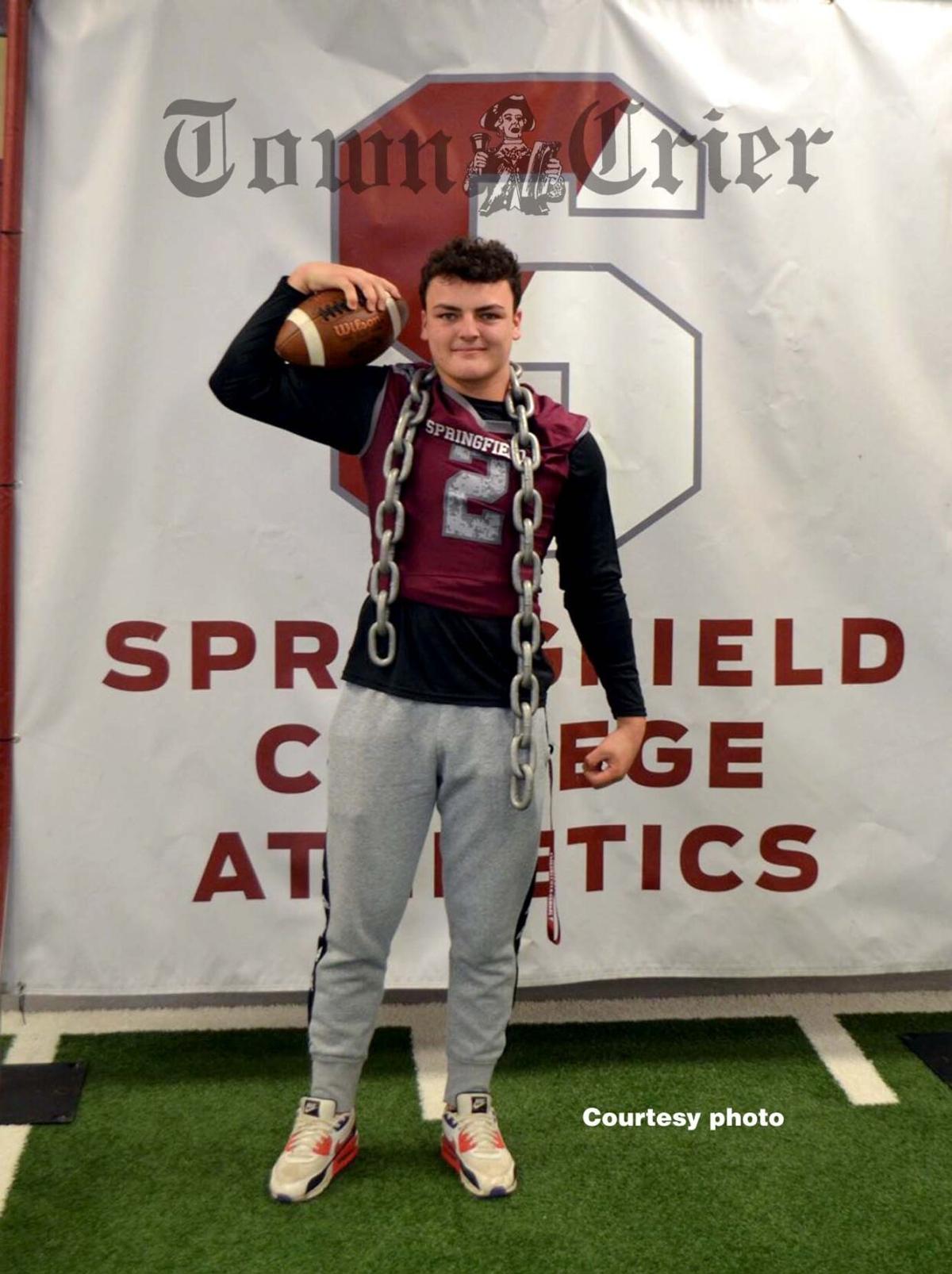 Tewksbury Memorial High School senior Will McKay will continue to play football next season at Springfield College as a linebacker. (courtesy photo).

Tewksbury Memorial High School senior Ryne Rametta, shown here playing football and and baseball, will play both sports at Husson College in Maine, which he announced on Tuesday. (courtesy photos).

Tewksbury Memorial High School senior Will McKay will continue to play football next season at Springfield College as a linebacker. (courtesy photo).

TEWKSBURY – Certainly this calendar year has not been easy for anyone. The COVID-19 pandemic has taken so much from all of us day in and day out, so when good news happens, it really helps erase all of the negative thoughts and feelings of what has been going on since March.

On Tuesday, two great friends and football teammates, Will McKay and Ryne Rametta both announced on Twitter that they have committed to play at the collegiate level. McKay will play football at Springfield College and study Exercise Science to potentially become a strength and conditioning coach. Springfield is a highly respectable Division 3 program.

Rametta will take on double-duty as he will play both football and baseball at Husson College in Maine, also a highly respected D3 school. He plans on studying secondary education with a concentration in English, while minoring in coaching.

Certainly both of the seniors are terrific all-around athletes. McKay also plays baseball and joined the golf team this past fall after football got pushed to Fall Season II, and Rametta plays three sports, football, basketball and baseball. While they excel on the fields, they are both strong students, extremely dedicated to their crafts, and just all-around first-class kids, who were both extremely excited to chat about the other one's news.

“I couldn't be more proud of Ryne,” said McKay. “There's not many kids who are at Tewksbury High now who work harder than he does day in and day out. It's awesome to see that he's going to college to play not one sport, but two sports. Since freshman year we have been able to watch him grow. He has an unbelievable arm and he's just an unbelievable person. It's going to be so awesome to see him succeed at the college level.”

Said Rametta, “Springfield has been on Will since day one. I'm just really happy for him. We have spent a lot of time together, especially over the summer, working really hard. He's moving to tight end this year and he's been working really hard on that. I'm excited to have him there and this spring I think we're going to make some noise because I know that we have been working really hard not only in the weight room but also on the football field as well. We also played some baseball together. He's just a competitor. I think Springfield is getting an absolute competitor and just a beast of a linebacker. They are getting a great kid, just all-around.”

Rametta, 5-10 and 180 pounds, is coming off a junior season where as a quarterback, he completed 91-of-165 passes for 1,334 yards with 15 touchdowns and had 9 interceptions. In basketball he's a perimeter shooter and although he's been streaky, he can bury the trey with the best of them. In baseball, he's been the starting catcher since his freshman year. He's dynamite defensively, throwing the ball and also he provide some punch at the plate.

He said that originally he was looking at five schools including Worcester State, Westfield State, Western New England, the University of New England and Husson. Most of those schools wanted him for both sports, but he explained that Husson did everything right, making his decision that much easier.

“Back in March, the Husson Baseball program reached out to me about playing for them,” said Rametta. “(The coach and I) really hit it off and we had about an hour phone conversation that initial contact. Then he contacted the (Husson) football coach and they got on board right away. There were other schools that were interested, but with Husson I liked the campus a lot, I liked the connections between all of the baseball and football coaches together who are allowing me to play both sports and that's really important to me. They have been interested in me since day one and I just really appreciate that. They really wanted me and all of that just goes a long way with me.

“It was a tough decision, but since day one Husson has been there for me throughout the whole thing and they have really supported me. I think this is a place that I can call home for the next four years.”

Husson plans on having Rametta compete for the quarterback position with the football team and with baseball, he will be an utility player, which is something he has transitioned too over the summer. He said he's been more comfortable in that role, playing all over the diamond, including some pitching and some catching during the abbreviated fall season.

He was asked about playing two sports in college and being able to balance that and his academics.

“They're going to help me a lot. The two programs really coordinate well together,” he said. “They have done it with our athletes in the past and the head football coach was a multi-sport athlete himself. He's been through it and he's going to help me. Both the football and baseball coaches have a great relationship so they are not going to try to push me to one sport over the other. They're going to help me to balance academics with athletics. I think being a three-sport athlete in high school has really helped me balance my academics and I should be used to it. It's going to be tough but I'm up to the task.”

Rametta hasn't played in an official game for TMHS since the end of last year's basketball season. The baseball season was canceled and the football season was pushed to this upcoming February. He's chomping at the bit to get back to competition, which includes the basketball team opening its season on January 11th.

“It's definitely been a crazy year especially now around the holidays. I haven't been able to see all of my family during these holidays and that's hard. For sports, not being able to play football in the fall really hurt, but we have to get through it. Everybody is going through it. Coach (Brian) Aylward has given us some good advice about just pushing through it and not letting it affect you and to keep on working. I just have been putting my head down and working through this whole thing. It's been hard but I think I have done a pretty good job of going through this whole scenario,” said Rametta, who is now benching 275 pounds and squatting 370.

Rametta spent a lot of time in the gym, football and baseball fields with McKay over the last few months and the two have become very close friends. McKay said that he has put on about 20-25 pounds since the end of last year's football season, where he had a terrific season, especially defensively as a linebacker. The 5-foot-10, 205-pounder, benches 265 and squats around 270. He said that extra time in the weight room certainly will help him down the road with this season and the next four in college.

“It's your senior year and you are wanting to play football and the world has basically been shut down in front of you,” he said. “I have talked to Coach Aylward about it and he said that we have to take advantage of it. Now everyone on the team has had six months to lift more weights, six months to get stronger and faster. Losing the fall season stinks in a way, but the other way to look at it is all of us now have five more months to work on becoming a better football player and a better person. That was something I tried to take advantage of during quarantine and now with everything being pushed back.”

“I was looking at Worcester State which is such an awesome school,” said McKay. “They really treated me well whenever I spoke or visited with them. I spoke with Endicott College a bit, but I've been talking with Springfield now for about a year and they have just always been awesome. For a Division 3 school, some people say that they don't recruit that heavily, but I don't think that's the case at all. They have been awesome since day one, always reaching out, 'Happy Holidays, Happy Thanksgiving' and they always try to make you feel you are the main guy. That just helped me realize that this is the school for me.”

McKay was asked what the Springfield Coaches like in him as a player.

“They like the fact that I am from Tewksbury. They had Tommy Casey go there and the coaches there just love the tradition that we have here at Tewksbury,” he said. “They love our coaching staff and they love our toughness. They said they like my toughness and how I'm not afraid to go after the ball and make tackles. They like how I'm always willing to do whatever it takes to help the team.

“I've been neighbors with Coach Aylward so I have grown up with them. I've been close with all of them. When Johnny played, I remember being a little kid and going to their Super Bowl game at Gillette in 2013 and talking to Johnny and Tommy Casey after the game. I play golf sometimes with Tommy and I have really talked to him about how much he loved it at Springfield. That was one of the big reasons why I wanted to go there, after getting his thoughts.”

McKay said ever since he was a little kid football has been in his blood. That passion carried over during the 2013 Super Bowl game and later when he got into high school.

“It's just surreal. Every since I got into high school and I've seen other kids commit, I have always wanted to play college football. Being able to go to the gym everyday, workout, work for that goal and to see it all come together is just an awesome moment,” he said.