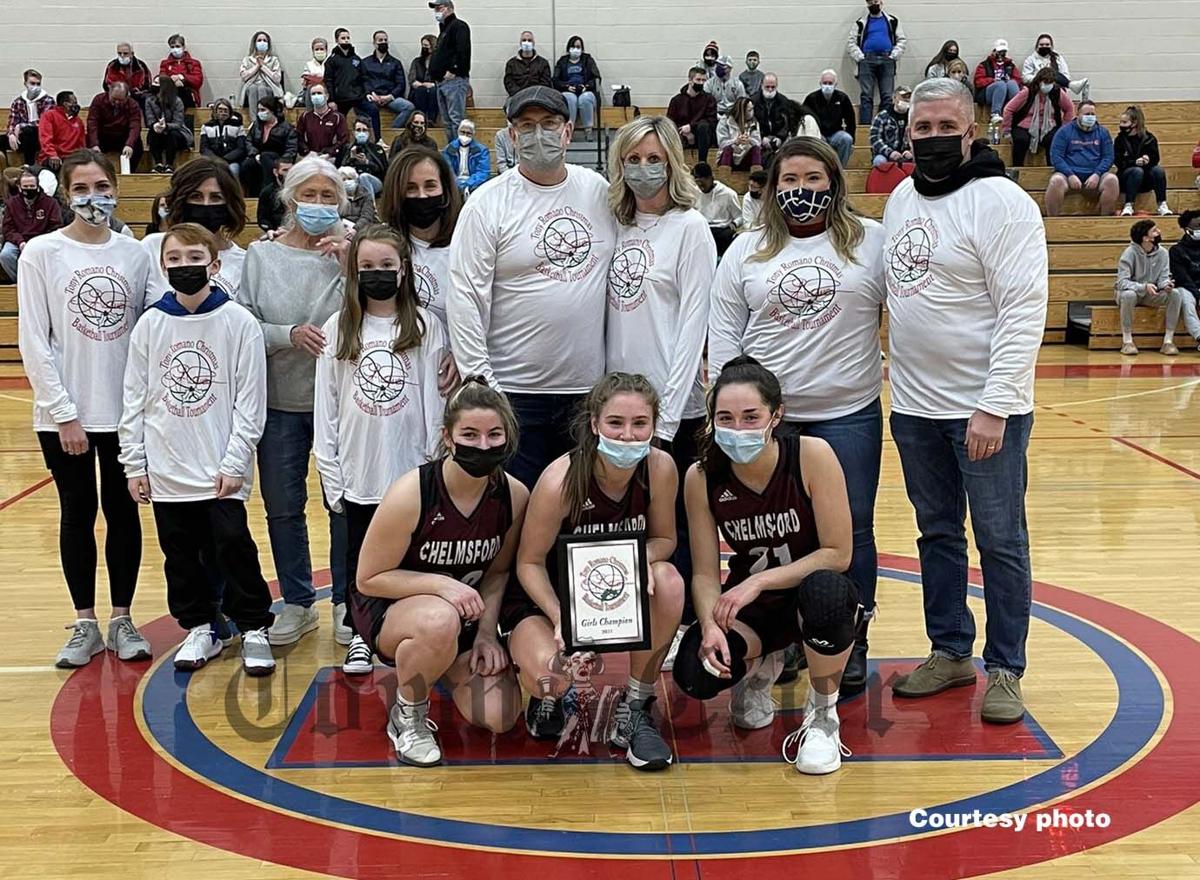 Last Wednesday night, the Chelmsford Girls Basketball team defeated Tewksbury in the Championship round of the third annual Tony Romano Memorial Christmas Tournament. At the conclusion of the game, the Lions captains from left, Emily Fortier, Mia Beauchesne and Ellen Angwin were honored with the championship plaque. The three posed with the  Romano Family which includes back row from left: Kaleigh MacInnis, Kris MacInnis, Nancy Romano, AnnMarie Romano, Patrick Romano, Kristin Romano, Alexis Romano and Tony Romano, and then in front of them includes Dillon Romano and Avery Romano. (courtesy photo/Ron Drouin). 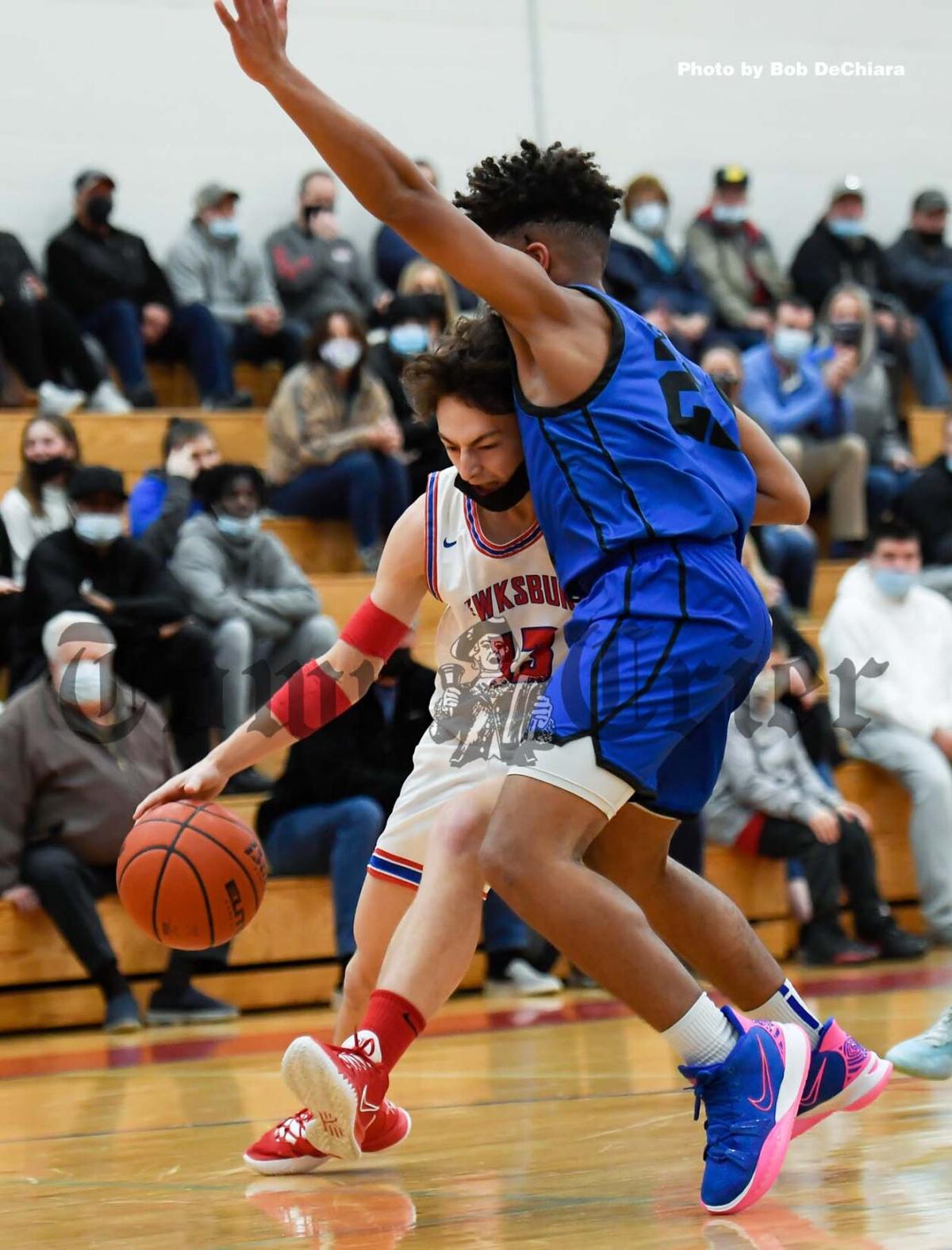 Last Wednesday night, the Chelmsford Girls Basketball team defeated Tewksbury in the Championship round of the third annual Tony Romano Memorial Christmas Tournament. At the conclusion of the game, the Lions captains from left, Emily Fortier, Mia Beauchesne and Ellen Angwin were honored with the championship plaque. The three posed with the  Romano Family which includes back row from left: Kaleigh MacInnis, Kris MacInnis, Nancy Romano, AnnMarie Romano, Patrick Romano, Kristin Romano, Alexis Romano and Tony Romano, and then in front of them includes Dillon Romano and Avery Romano. (courtesy photo/Ron Drouin).

TEWKSBURY – Going up against a much bigger and physical team, that also happens to be unbeaten, is certainly a tall task (pun intended).

For the Tewksbury Memorial High School Girls' Basketball team, they came into the game missing a few players, yet went toe-to-toe against the Mighty Chelmsford Lions, falling 41-35 in a back-and-forth championship contest of the third annual Tony Romano Memorial Christmas Tournament held at the Romano Gymnasium Floor last Wednesday night.

Tewksbury trailed by seven points after the first quarter and were able to cut it to two at halftime, before taking a three-point lead with 62 seconds left in the third.

Chelmsford answered with a 9-0 run and never looked back, although the Redmen had trailed by six with 3:17 to go only to cut it to two, but the Lions drained four free throws in the final 58 seconds to ice the victory.

"That was a tough team that we were up against," said Tewksbury head coach Joel Mignault. "We talk about getting better everyday and we knew that we could play with them, but we just fell a little short in the end."

In the beginning, Tewksbury had a real tough time trying to contain Chelmsford's Ellen Angwin. She scored the game's first four points, and her team's first ten points, and with 2:32 left in the first, it was Angwin 10 and Tewksbury 5.

“I think she scored like the first ten points. It was just (a matter of) rebounding which is something that we struggle with. Some of the girls stepped up (to help out in that area),” said Mignault. “Brooklyn (DeGrechie) came off the bench and played physical, Riley Veits is getting her hands on every ball and that's exactly what we need to get girls to come off the bench and help us in the areas that we're lacking in.”

Chelmsford closed out the first quarter with another field goal to go up 12-5 and the lead went to eight, before Tewksbury was able to get to the line, making three of four freebies before Vicki Lavargna drained a three-pointer, cutting the deficit to two.

The teams exchanged quick 4-0 runs, including Veits getting both baskets in the final 18 seconds, bringing the halftime score to 19-17 in favor of the visitors.

The third quarter was a bit sloppy on both sides. Tewksbury scored one field goal in the first 5:15 and Chelmsford had two in the first 4:01 and then went the next 3:54 before getting another.

Trailing 24-19 after Charlotte Buckley drained a three-pointer, Tewksbury answered with a 10-0 run to take a three-point lead. Kati Polimeno started it with two free throws and then added an inside bucket off a Kat MacDonald steal. MacDonald then converted a shot thanks to a pass from Victoria Catanzano and Veits added two free throws to close out the run.

Angwin got her first basket of the third quarter with five seconds left, before the Lions opened the fourth on an 8-2 run to retake the lead at 34-29 with 5:35 to go. Sam Ryan hit both free throws before Buckley drained another three-pointer. Polimeno and Ryan followed with four free throws, before Mia Beauchesne closed it out with four free throws in a 33 second span.

Ryan led the way with 10 points, while Polimeno had 9 points and 4 defensive steals. Veits finished with 6 points, Christina Wentworth had five, while Lavargna and MacDonald combined for the other five. Veits also had six rebounds.

“We're coming along and we just need to keep getting better each week,” said Mignault.

On Tuesday night, the girls were defeated by Methuen, 42-25 to fall to 2-3 on the season. Vicki Lavargna led the way with 11 points.

Tewksbury will host Chelmsford on Friday night, before going to North Andover on Tuesday.

The TMHS boys team lost 58-46 to Methuen on Tuesday night, putting their record to 0-5. Luke Montejo led the way with 13 points.

“We came up short tonight, but I thought we had a competitive spirit about ourselves that bodes well for the remainder of the season. It was our most complete game on the defensive end and in terms of rebounding,” said head coach Steve Boudreau. “We will build off tonight’s effort and energy as we move forward. There is a lot of basketball left to be played and we are getting better each day.”

The boys will travel to Lowell on Friday before coming home to take on North Andover on Tuesday.