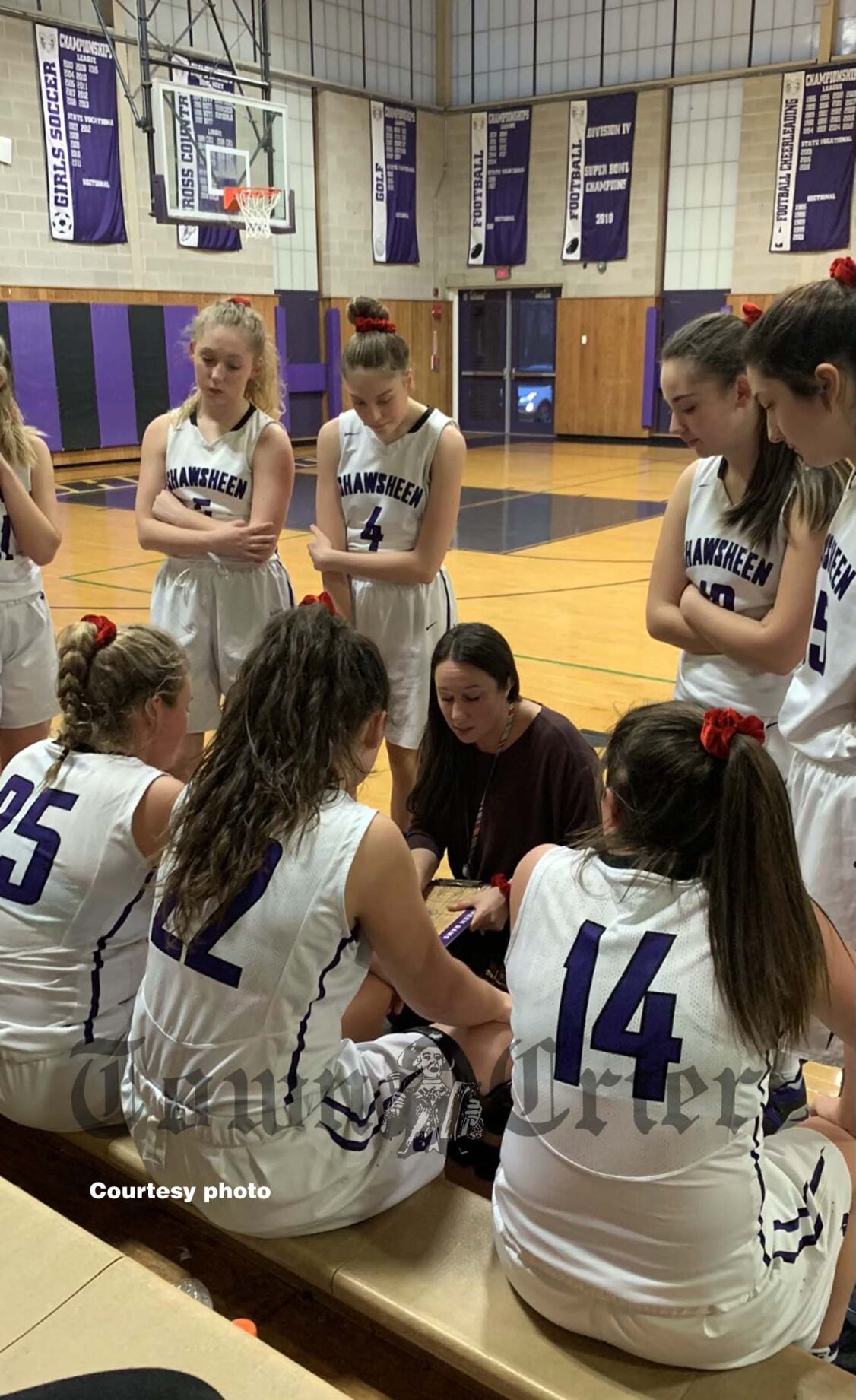 This season, the Shawsheen Tech Girls Basketball team will be under the direction of Samantha St. George, a former player, captain and JV Coach. St. George goes over a play with the JV team during a game last year. (courtesy photo). 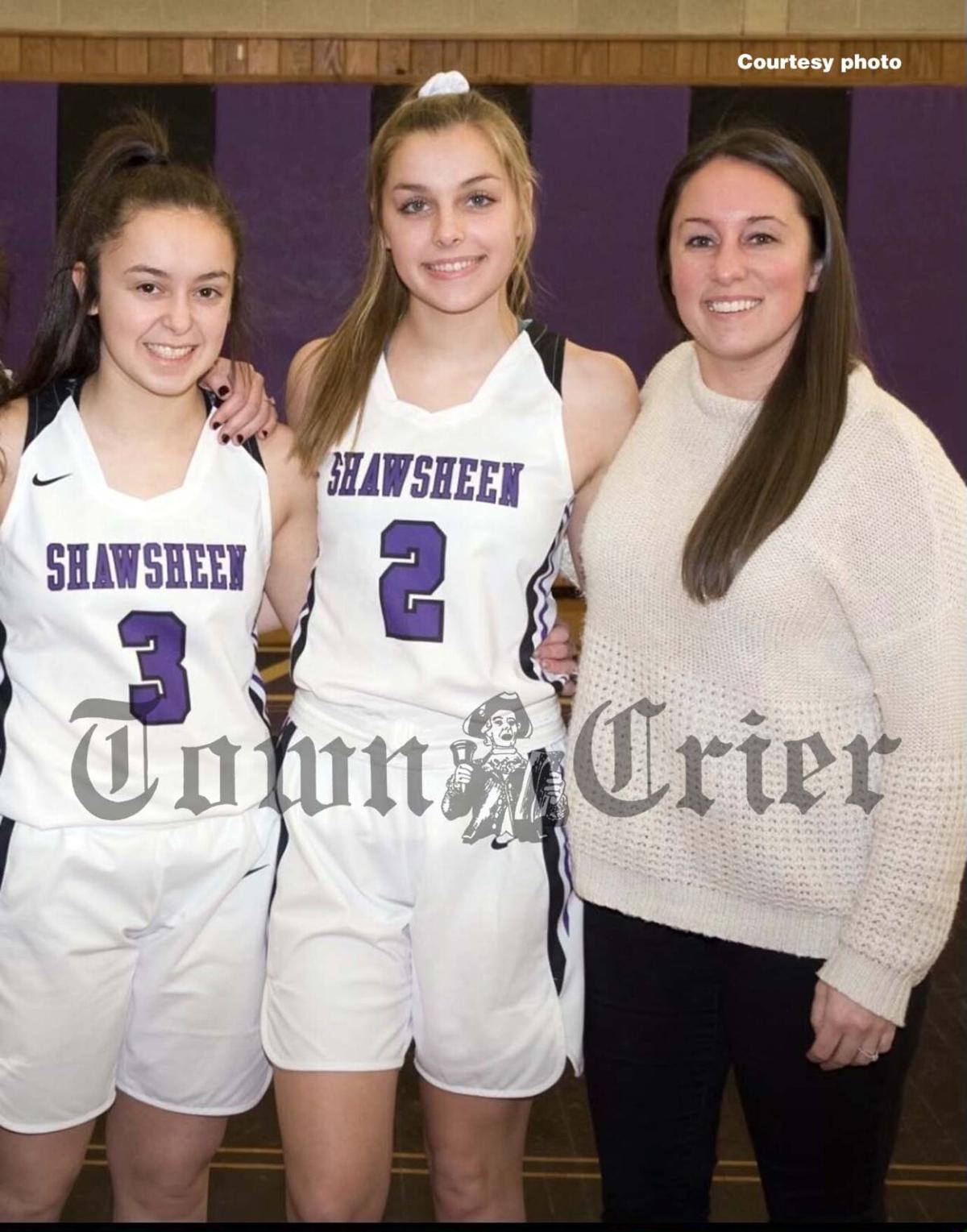 This season, the Shawsheen Tech Girls Basketball team will be under the direction of Samantha St. George, a former player, captain and JV Coach. St. George stands with two returning varsity players on this year’s team, Susanna Gillis and Shelby Bourdeau. (courtesy photo).

This season, the Shawsheen Tech Girls Basketball team will be under the direction of Samantha St. George, a former player, captain and JV Coach. St. George goes over a play with the JV team during a game last year. (courtesy photo).

This season, the Shawsheen Tech Girls Basketball team will be under the direction of Samantha St. George, a former player, captain and JV Coach. St. George stands with two returning varsity players on this year’s team, Susanna Gillis and Shelby Bourdeau. (courtesy photo).

BILLERICA – When Shawsheen Tech Girls Basketball coach Kate Marshall decided to take a leave of absence this season, the Rams did not have to look far to find a quality replacement for the second year coach. In fact, they needed to look no further than their own sideline, where they were lucky enough to find varsity assistant coach and head junior varsity coach Sam St. George.

St. George, a 2008 Shawsheen Tech graduate, who has been Marshall’s assistant at the varsity level for the past two seasons, while also coaching the junior varsity squad. St. George takes over a Rams squad that went 9-9 last season, and 21-18 in two years under Marshall. The first-year head coach can’t wait to get started on the season.

“Coaching is something I have always been passionate about, and I am excited for my first head coaching position,” St. George said. “A big part of that is being at Shawsheen and working with the Shawsheen kids. They are all such great kids, and I am just super excited to be part of the program.”

St. George should know whereof she speaks when she talks about Shawsheen athletes. She was a three-sport star for the Rams in her playing days, spending four years with both the basketball and lacrosse teams, while being a three-year member of the soccer team.

As a senior, the Billerica resident was selected as Shawsheen’s Female Athlete of the Year.

Perhaps equally, or even more important, St. George was a two-year captain for both the lacrosse and basketball team, a fact not lost on Shawsheen Athletic Director Al Costabile when he was making his choice for a new head coach.

“Sam had a great four-year career at Shawsheen. She was a great three-sport athlete,” Costabile said. “And she was a two-year captain in two different sports and that is very unusual. Really at a young age, she showed tremendous leadership ability and that has carried over to her coaching.”

It most certainly has. This may be her first head coaching experience, but St. George is hardly a stranger to the coaching profession. She served as not only the JV coach for Shawsheen basketball for the past two years, but also at Austin Prep, where she was the assistant varsity and head junior varsity lacrosse coach under the direction of former Shawsheen coach Liz Richards, whom she played under during her Shawsheen days.

In fact, St. George credits Richards more than anyone for helping her develop her coaching philosophy.

“The way I like to run teams is family first. You don’t see a team with no chemistry off the court playing well on the court,” St. George said. “I feel like our JV teams over the past couple of years have been super close. I feel like that is my philosophy, along with being very competitive.

“That’s what coach Richards was like. Her mentality was all about family and we were all very close. I actually wrote one of my college essays about her, and she meant so much to me in so many areas of my life. That is where I picked up a lot of my coaching style from. She would always provide a soft landing place if you needed it, but she would work you hard on the court.”

St. George says she also learned plenty about coaching from Marshall during her time working with her.

“Kate is one of my best friends. We have been great friends for twelve years now, so working with her the past couple of years has been great. I have learned a lot from her,” St. George said. “She is super passionate about coaching and her commitment to the kids has been incredible and I have picked that up from her.”

Costabile has seen St. George in action as both a coach and a player and he feels she will be successful in her new role with the Rams.

“I have a lot of confidence in her. I think she will handle it very well. She has shown tremendous leadership ability and she has a tremendous ability to connect with student athletes,” Costabile said. “She is a great role model and she has a great attitude. She is firm, but she is not a screamer or anything like that. She has a very firm, comfortable style.”

While St. George takes over the varsity program, former freshman coach Kim Barriss will take over the JV program. Barriss is another Shawsheen alum, and was a star basketball and soccer player in her own right.

As the daughter of coach Dick Barriss, she also has some great bloodlines, and Costabile couldn’t be happier to have the two of them on board at Shawsheen. In addition to coaching at Shawsheen, both also teach at the school, with St. George teaching special education and Barriss teaching biology.

Another thing working in St. George’s favor is that the transition from Marshall to her as head coach should go smoothly, with her having coached several of her players at either the JV or varsity level over the past couple of years.

“We have some new freshmen coming in to the program, but most of the players are familiar with me,” St. George said. “Most of all, I just want the kids to work hard, and they understand that about me. That has definitely made things easier. They want to work and I want to work with them, and that is where it all starts.”