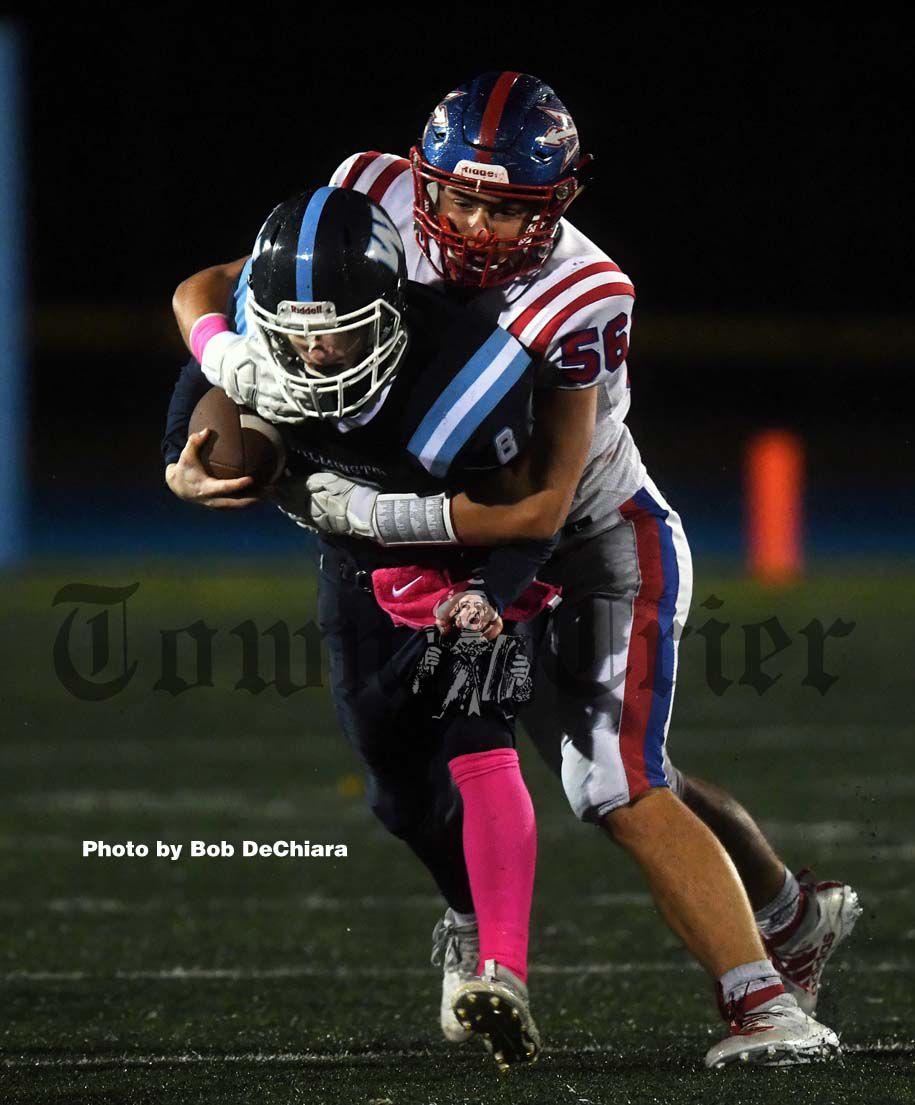 Wilmington High senior Christian Robarge, shown here getting tackled by Ray Magliozzi, led his team to a victory over Burlington earlier this season. 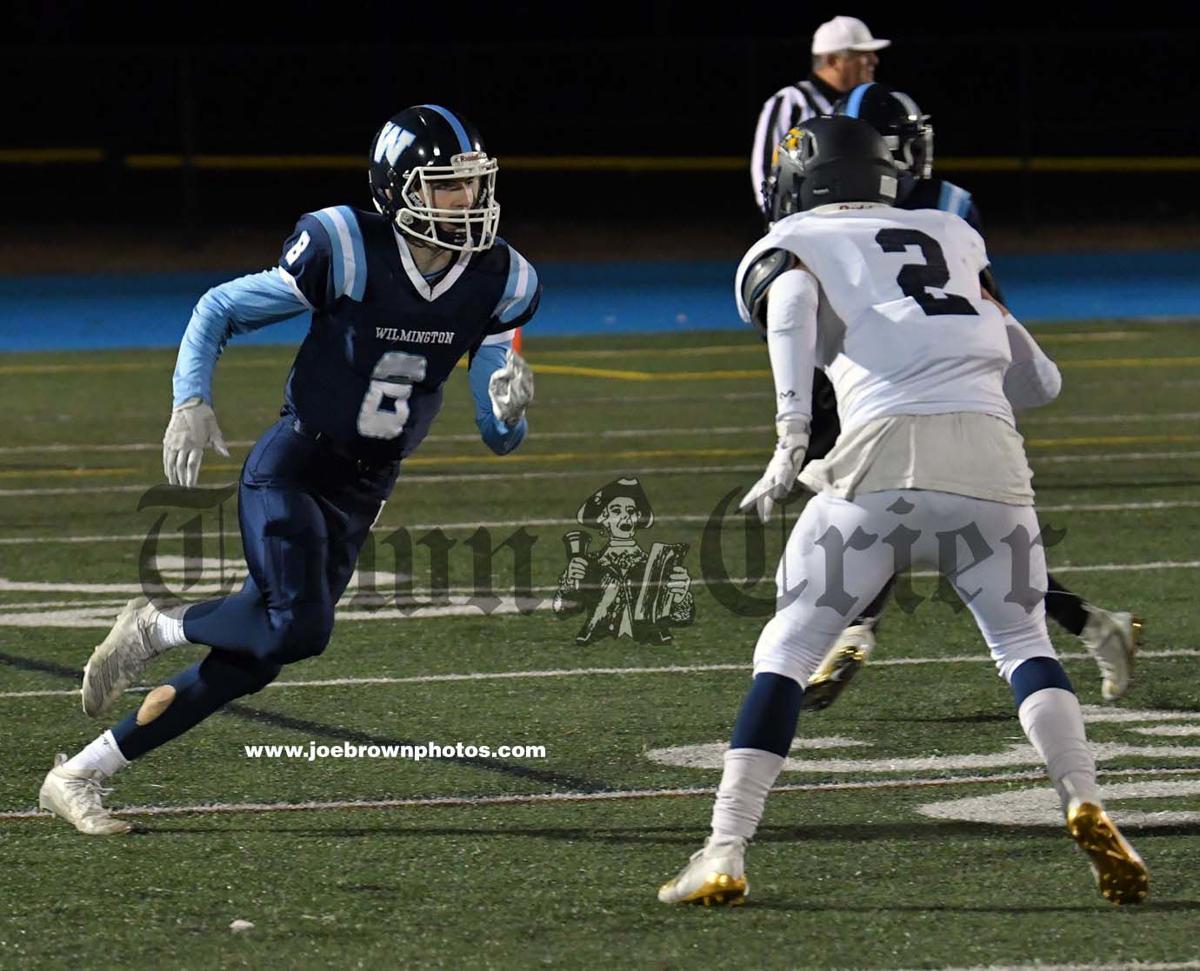 Senior Christian Robarge has played a number of different positions this season for the Wildcats including wide receiver. In the Lynnfield game, he tries to get past Colby Clattenburg.     (photo by JoeBrownphotos.com).

Wilmington High senior Christian Robarge, shown here getting tackled by Ray Magliozzi, led his team to a victory over Burlington earlier this season.

Senior Christian Robarge has played a number of different positions this season for the Wildcats including wide receiver. In the Lynnfield game, he tries to get past Colby Clattenburg.     (photo by JoeBrownphotos.com).

TEWKSBURY/WILMINGTON – When Thursday's 86th annual Wilmington-Tewksbury Football game officially begins, it won't be difficult to find Christian Robarge on the field. That's because No. 8 never comes off of any field.

But if you are the casual fan, you may have a hard time figuring out where the senior captain plays. Is it wide receiver? Quarterback? Slot back? Running back?

"He does it all. He's our best athlete," said Wilmington head coach Craig Turner.

Growing up and throughout the subvarsity levels, Robarge – a three-sport athlete including hockey and lacrosse – played quarterback, but over the summer and into this season, he was switched to a wide receiver.

"We kind of saw it last year of what he could be in terms of a receiver," said Turner. "I saw it personally last year (coaching in) lacrosse. He just does everything for that lacrosse program. He takes face-offs, he's out there man-up, man-down, he scores goals and defends their best guy."

Through the first four games of this football season (counting the endowment game against Billerica), Robarge had nine catches for 225 yards, including a huge night with 4 catches for 123 yards in the team's loss to Woburn.

Two games later, the team's starting quarterback Tristan Ciampa went down with an injury and that forced the Wildcats to put freshman Joe McCauley into an extremely tough situation, facing Melrose, one of the top teams in the entire state.

After Melrose dominated Wilmington and the 'Cats fell to 0-4 (0-3 officially), Turner and his staff decided to a new plan.

"We needed a spark at quarterback and Joe (McCauley) was still getting his feet wet, so we put a package together for Christian and he really runs it well," said Turner. "He can throw well enough to keep people honest and he's just a dynamic kid back there being able to run the ball as a quarterback as well. We're looking forward having him and Joe back there on Thanksgiving."

Robarge was the starting quarterback against Watertown and Burlington, leading the team to victories in both games. He was sensational in the win over Watertown, completing 6-of-7 passes for 106 yards with a pair of TD passes, while also rushing for 63 yards.

Against Burlington, he completed 2-of-4 attempts for 50 yards and a TD and also rushed for 46 yards.

McCauley was then shifted to QB during the team's wins over Saugus and Gloucester in the consolation rounds of the state tournament, before Robarge was inserted back there in the second half against Lynnfield. In that loss, he played terrific, almost leading the team to an incredible comeback victory, finishing the game with 152 combined yards between throwing and running.

On the season, Robarge has some impressive stats. As a QB, he has completed 17-of-28 passes (61 percent) for 377 yards with 4 TD passes and zero interceptions. He has also rushed for 264 yards with one score, and then as a receiver, he has 352 yards and two touchdowns. All in all, he has 993 yards from scrimmage.

Robarge was asked about being flipped back and forth between the positions.

"I like playing quarterback because I get the ball more," he said. "I've played quarterback basically my whole life so going back to it wasn't that hard. It's just difficult, switching and going back and forth, thinking I'm playing wide receiver one game or I play quarterback one game or the other way around."

During the 2.5 games as a receiver against Saugus, Gloucester and then Lynnfield, Robarge had just four catches for 48 yards, so it seems like he is more valuable touching the ball more as the QB.

"We've tried. We have really tried to get him the ball more (when he's not a quarterback). When he's a receiver, everybody is trying to shut him down so it gets tough. You try to stay away from forcing things," said Turner.

No matter where Robarge plays on offense – while he is also the team's free safety on defense – he knows this is it, this Thursday will mark the last time he either calls the plays in the huddle, lines up as a wide receiver or tries to defend passes on the defensive end of the field.

While Robarge has grown up and played with a lot of his teammates, he has also grown up watching members of his family suit up for the Wildcats. Two years ago, when he was a sophomore, his cousin Tommy Robarge played, and before him included fellow cousins Johnny and Matt Kincaid, while back in the late 1970s, his uncle John Robarge was the team's quarterback.

Christian is part of a huge family, which includes his siblings Nick, Hayley and Caroline, who were all athletes in various sports at WHS.

"I know all of them are going to be there to watch me so that's great," he said. "Then I'll see them the rest of the day, so they can cheer me up if things don't go well, and they are there to always support me."

With his family in the stands, Robarge – like the rest of the Wildcats – realize that the team will have to play near perfect ball to come away with an upset win over the three-time Division 3 North Sectional Champions from Tewksbury.

"We just have to play our game. We can't fear them and have to come out and play them like we did in the first half against Billerica. We can't shy away from contact. We have to just do our jobs and just really play well."

Like Christian Robarge has all season long ... no matter the position he has played.