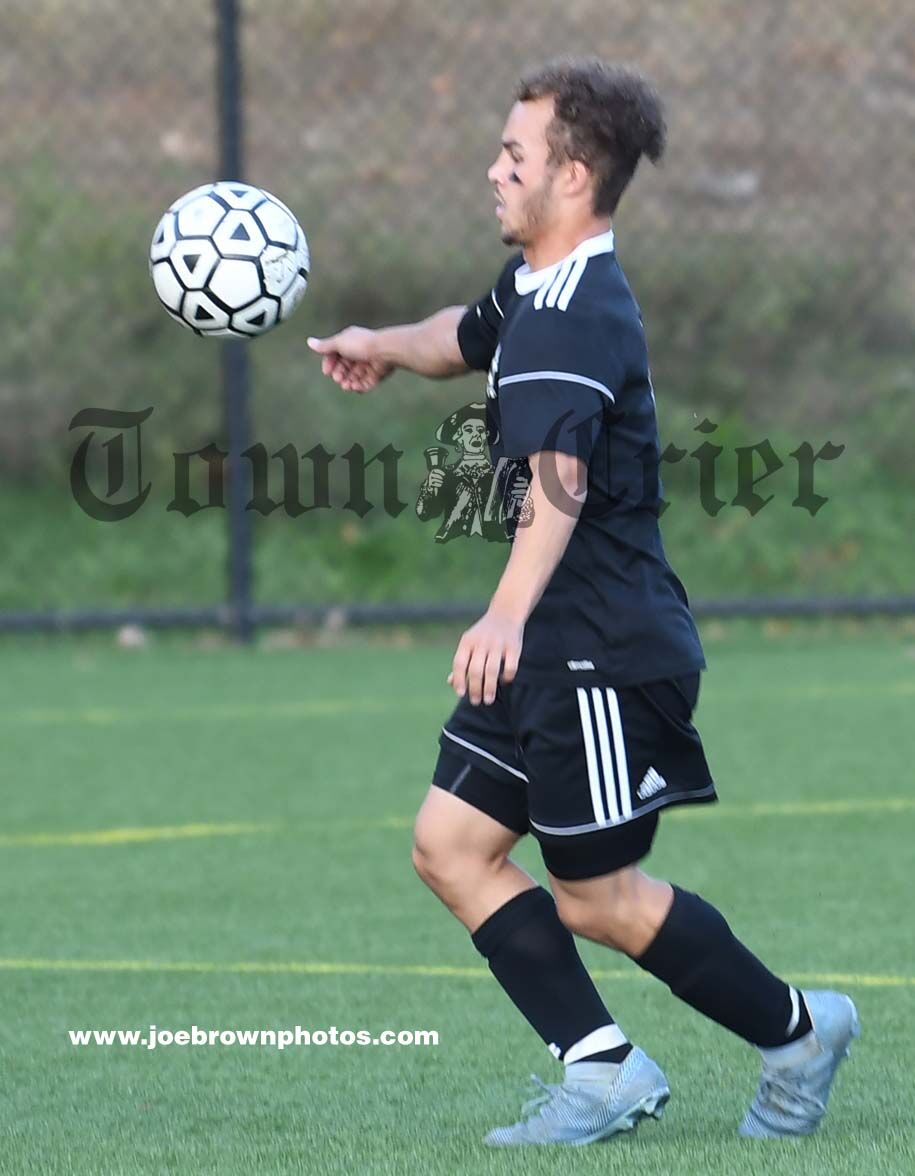 Shawsheen Tech’s Jeremy Perez takes control of the ball after playing it off his chest during an earlier season Rams’ home game. (photo by JoeBrownphotos.com). 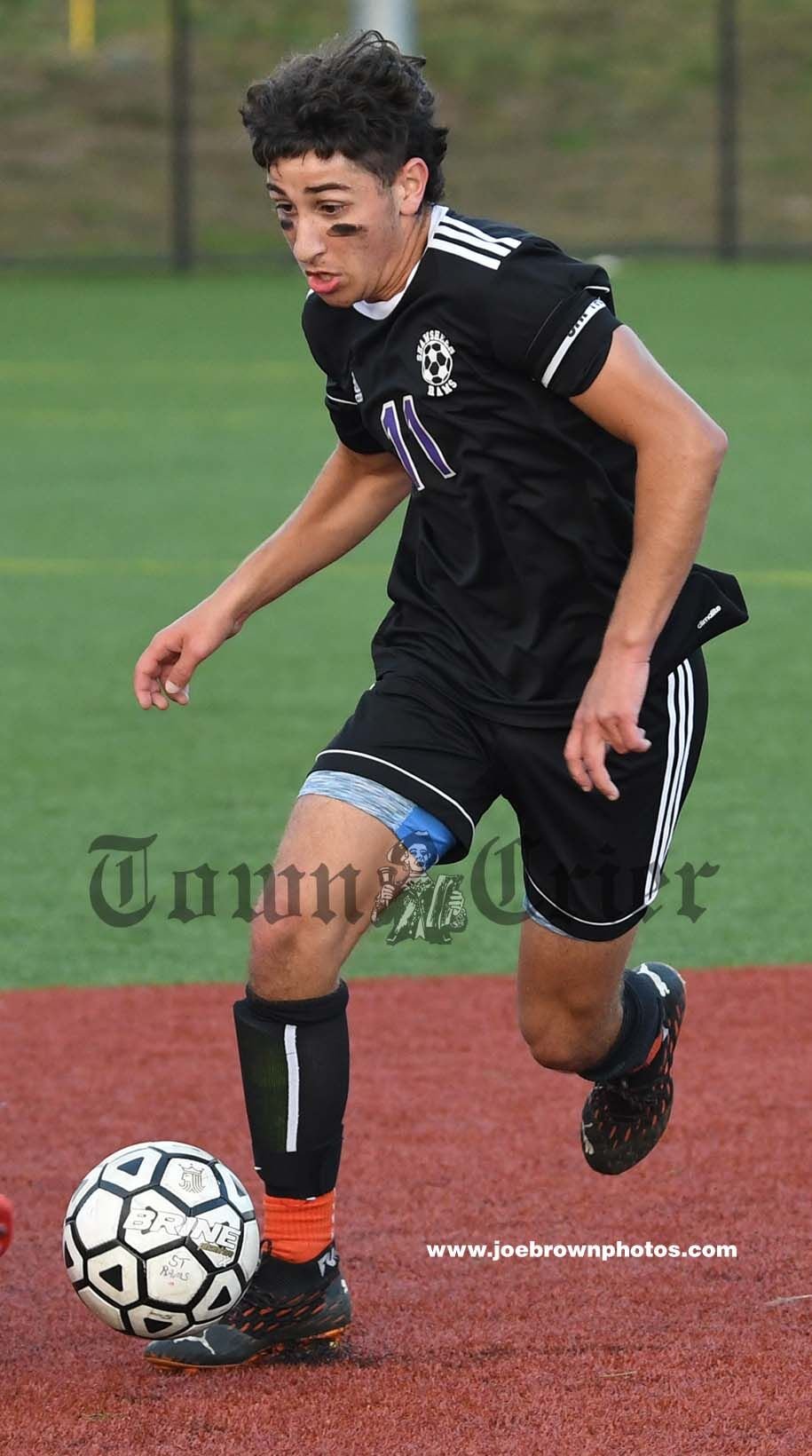 Noah Rizzo works his way up the field with the ball during an earlier season Rams’ home game. (photo by JoeBrownphotos.com).

Shawsheen Tech’s Jeremy Perez takes control of the ball after playing it off his chest during an earlier season Rams’ home game. (photo by JoeBrownphotos.com).

Noah Rizzo works his way up the field with the ball during an earlier season Rams’ home game. (photo by JoeBrownphotos.com).

BILLERICA – After many false starts, the Shawsheen Tech Boys Soccer team on Friday finally found out who and where they will be playing in the first round of the MIAA Division 4 state tournament. As it turns out, the 25th seeded Rams will not only need to take a bus, but they will also need a ferry, as they will be traveling to take on number 9 Nantucket in their first round matchup on Saturday. As of the Town Crier’s press time, the time of the game had yet to be determined.

Like almost everything else to do with the this first year of the MIAA’s statewide tournament, finding out who the Rams would be playing in their first round game was a lesson in utter confusion, much to the dismay of Shawsheen coach Tom Severo, who is now getting ready to prepare his third different opponent in the course of about three days.

“We were going to be playing Wahconah, so I scouted Wahconah and was checking out as much information as I could, so I could find out what kind of team they had,” Severo said on Tuesday night. “Then yesterday (Monday) they changed it to Pope Francis in Springfield. And then today at around 4:00, when practice was over, we were told it was going to be Nantucket.”

Needless to say, the uncertainty of opponents has made it rather difficult to prepare for their first round game.

“Yesterday at practice we were working on marking a kid from Wahconah, and then today we were preparing for Pope Francis,” Severo said. “Then at the end of practice, we find out it is actually Nantucket. So, at this point, I don’t really know much about them.”

Severo is well aware that Nantucket will bring an outstanding 12-4-1 record into Saturday’s game, while the Rams will bring an excellent 8-3-5 record of their own into the game. The Whalers are led on offense by senior David Lemus Castro who has had several multiple goal games on the season, including a hat trick against Falmouth and a pair of two goal games against Dennis Yarmouth and Barnstable.

Junior Yeison Lemus Castro has also provided an offensive spark for the Whalers, as has Alejandro Chacon, who scored the game winning goal against Falmouth.

Regardless of their opponent, the Rams players are excited for the start of the post season. Led by an outstanding season by senior goalie Tyler Kopacz of Tewksbury, as well as the return to the lineup of fellow Tewksbury resident, senior forward Noah Rizzo, the Rams are ready to play.

The Rams will also be looking to the leadership of senior captain Jeremy Perez of Tewksbury, along with some younger players like freshmen Nike Georgoulis, and Ethan Melanson, as well as sophomores Brian Duhamel and Nick Gerasimov.

“They are excited for it. We have been practicing penalty kicks like we always do prior to the tournament, and the kids seem ready,” Severo said. “It has been kind of crazy, but it is what it is, and we will do the best we can and make the most of it and have a great experience.

“I like this team. We have come together really well and we have won six of our last seven games, so I am feeling really good about this team. We will see what happens, but I know we will be ready to play.”