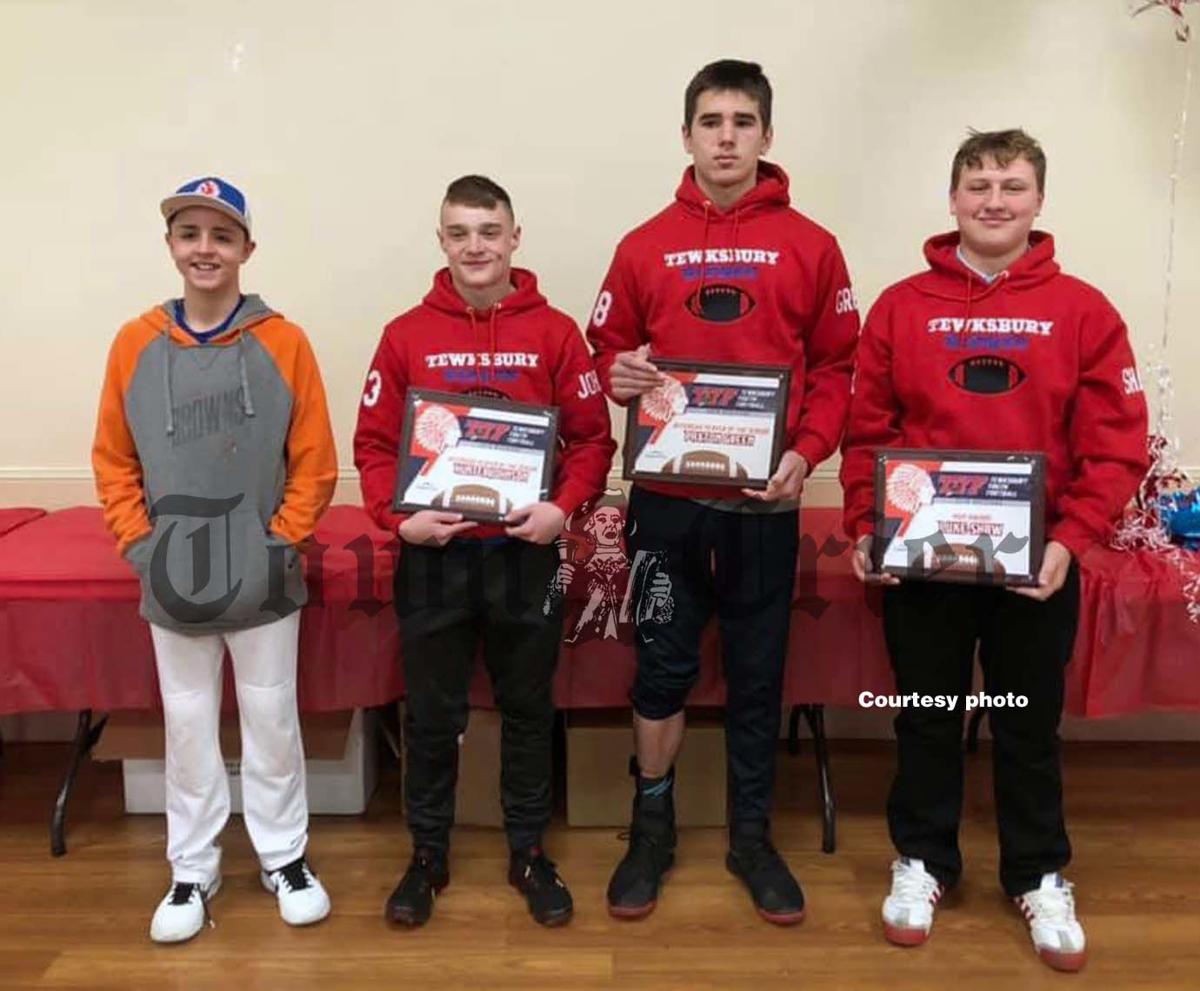 From left, Will Holloway, Hunter Johnson, Paxton Green and Luke Shaw will be competing in the National Youth Football Championships in Florida next month.     (courtesy photo). 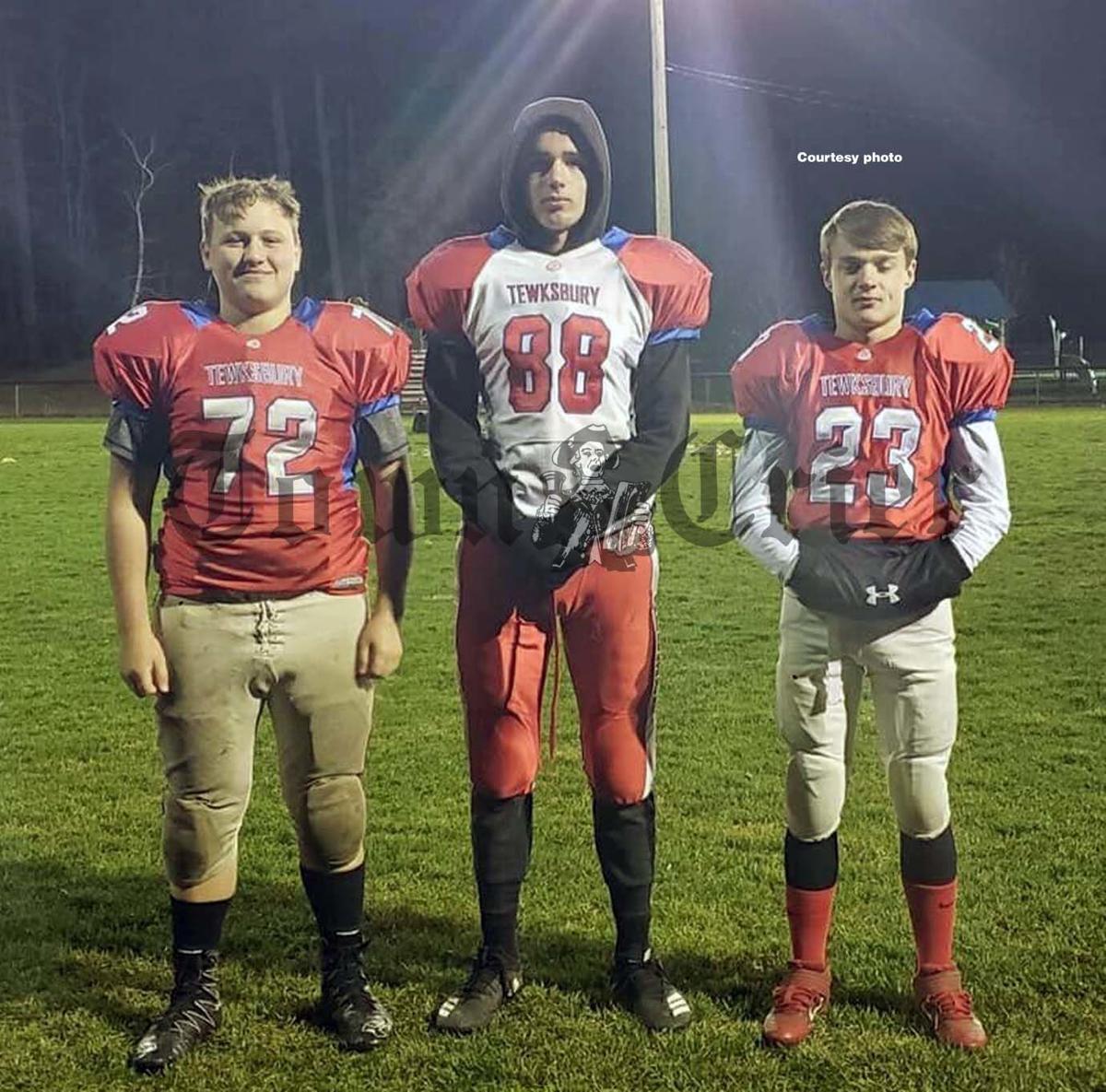 In order, Shaw, Johnson and Green — the four boys (including Holloway) will be competing in the National Youth Football Championships in Florida next month.     (courtesy photo).

From left, Will Holloway, Hunter Johnson, Paxton Green and Luke Shaw will be competing in the National Youth Football Championships in Florida next month.     (courtesy photo).

In order, Shaw, Johnson and Green — the four boys (including Holloway) will be competing in the National Youth Football Championships in Florida next month.     (courtesy photo).

TEWKSBURY- The football program in town has developed some of the best athletes over the years.

During the second week of December, Tewksbury eighth graders Paxton Green, Hunter Johnson, Luke Shaw, and seventh grader Will Holloway will represent the Tewksbury Youth Football League as members of the Central Mass League’s All Star team, as they play national games in Orlando, Florida.

The boys all got the news via email, and they were all pretty thrilled.

“I was playing video games, and my mom barged into my room and was like, ‘You made it!’ and I was like, ‘What?!,’” said Will Holloway.

“It was awesome, he was in complete shock, the All-Star kids are amazing, so just to have an opportunity is just awesome,” she said.

To this point, the boys have somewhat of an idea of what will be happening down there.

When the players arrive, they will soak in the warmer weather, and be greeted by a four-star hotel with a pool and hot tub, two days off, and a trip to Universal Studios.

But one thing is for sure, every other day from December 7th-14th, it’s all business, film study, and football.

“They are the best players in the [country], so taking what you know and improving on it is key,” said Luke Shaw, who normally plays tackle on the offensive and defensive sides of the football.

They boys from Tewksbury have already put some work before heading down to the big game. The boys commute from Tewksbury to Shrewsbury, Leominster, and Westboro for two-hour practices on Saturday mornings and nights.

“All the positions go in groups and learn plays,” said running back/linebacker Hunter Johnson. “You can always improve on fundamentals.”

In very few words, Will Holloway described his new teammates. “A lot of big kids,” he laughed.

But, this is a chance for the boys to get to know their teammates, who come from all over Massachusetts, and put on a show.

The players have had some help from the town and state to get the opportunity to play in this game.

Tewksbury’s Police Athletic League has donated $200 to each kid. During the season, the Central Mass League puts on a calendar fundraiser for the players to help offset costs, which come in at $1,600 each player.

With Thanksgiving around the corner, Green, Johnson, Shaw, and Holloway are thankful for this opportunity.

“I would just want to thank the league, for helping us, they’ve never stop coaching,” said Johnson.

“Tewksbury has been…very caring about everybody,” said Shaw. “The coaches brought us together, and we had a fun season.”

Danielle Holloway hopes the boys enjoy this time down in the Sunshine State.

“Being with the team, making new friends, and just playing football,” she said.

Also, represent Tewksbury, which they will have no problem doing.