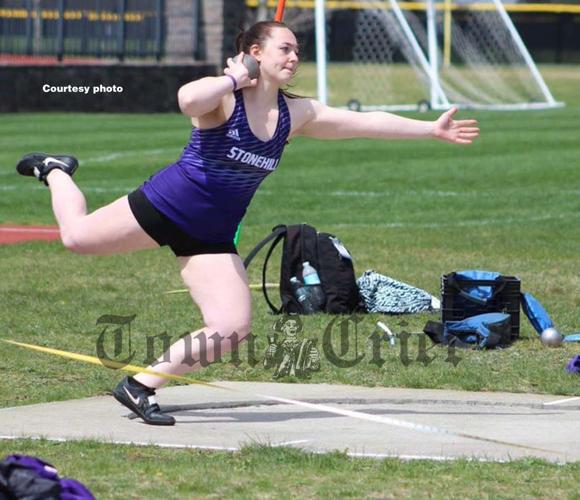 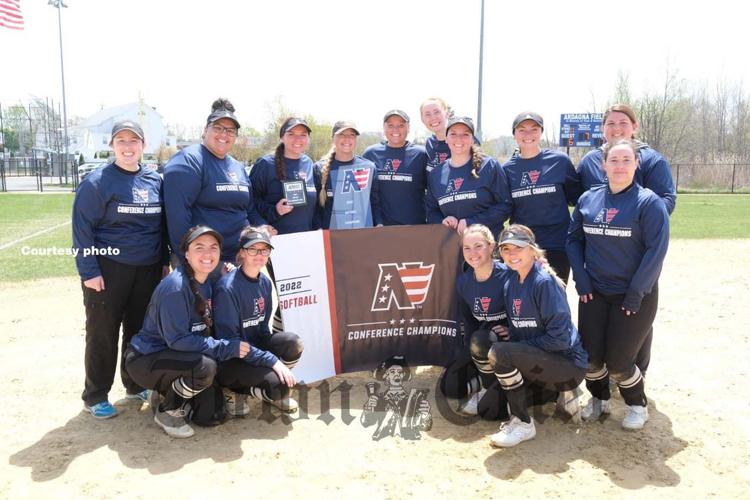 The Stonehill College women's track and field team wrapped day two of the Northeast-10 Conference Outdoor Track and Field Championships finishing in third place. On the day senior thrower, Krista Stracqualursi of Tewksbury, earned first place in shotput (her first NE10 Championship win in the event), an automatic selection to the All-Conference team.

Stracqualursi recorded a toss of 39-5 to secure 10 early points for Stonehill. Her first-place finish also garnered All-Conference honors and she also earned All-Conference in the discus when she came in third with a throw of 123 feet meters.

At the same meet, Sam Baker, a former star at Shawsheen Tech, finished seventh in the triple jump at 42.79 feet, eighth in the long jump at 21-2 and ninth in the javelin, throwing 149 feet meters to lead Assumption College.

Tewksbury's Joe Balboni, who attends Bentley University, was 18th in the 400-meter dash at 54.27 seconds.

Wilmington resident Emma Garrity continued her torrid spring and calendar year as she won the 400-meters with a time of 55.65 seconds at the NEC Outdoor Championship held this past weekend. Her time was easily better than finalist Chloe Lucas of Farleigh Dickinson, who came in at 56.25.

The win was Garrity's first in NEC Outdoor Championship competition and second overall, after winning gold in the 500 meters at this year's NEC Indoor.

Tewksbury's Lucas Frost captured the javelin title for the second straight year with a throw of 198-7, which was five feet better than his teammate Seth Cordeiro.

Senior Michael Monahan of Tewksbury, won a gold medal as the University of New Hampshire men's track and field team competed on the final day of the America East Outdoor Championships at the University of Vermont. The Wildcats placed fourth overall with 82.5 points. UAlbany won the championship with 235 points.

"I am very happy with this team with everything they had to go through this year," said UNH head coach Robert Hoppler. "I am very proud of what this team accomplished, across the board. "Michael winning that championship in the hurdles was able to pull it out overcoming some injuries and you could tell the team's excitement for him."

The bats were alive as the Franklin Pierce University baseball team wrapped up the regular season with a pair of double-digit run totals in a Northeast-10 Conference doubleheader sweep at Saint Michael's. The Ravens hammered out 30 hits on the day, en route to wins of 13-0 and 12-9 at Doc Jacobs Field.

The wins allowed the Ravens to lock up the Northeast Division's second seed in next week's NE10 Championship. Franklin Pierce will host third-seeded Assumption in a first-round game on Tuesday, May 10. Game time is set for 6 p.m. at Pappas Field in Rindge.

In the first game, a 13-0 win, Wilmington's Graham Smith chipped in with a RBI single.

Finally, the Husson University baseball team has won back-to-back North Atlantic Conference titles after a 11-7 victory over the Terriers of Thomas College on Tuesday afternoon at Fighting Tiger Park. Freshman Ryne Rametta of Tewksbury, has appeared in 17 games as a field player, and is hitless in four at bats.

The 2022 Massachusetts State Collegiate Athletic Conference's (MASCAC) tournament champion Framingham State Rams will be making their fifth overall appearance in the NCAA Division III Softball Championship Tournament this week in the regional hosted by Salisbury. The Rams will face the host Sea Gulls in the opening round. The Rams were led in the circle by Wilmington resident Ally Moran, who earned 13 victories and added a save as she compiled a 2.21 ERA in 139 innings of work.

Salisbury earned an at-large bid to the NCAA Tournament after falling to Christopher Newport in the finals of the Coast-to-Coast Athletic Conference Tournament. The Sea Gulls finished the regular season 36-6 overall.

This will be the first meeting all-time between Framingham State and Salisbury.

Salisbury will be hosting the four team regional over the weekend with Endicott and Penn. State-Berks meeting in the other first round game. The double elimination regional competition will take place May 13-15 in Salisbury, MD.

The Lesley Lynx Softball team took down the top-seeded Eastern Nazarene Lions 7-6, beating them for the second day in a row, to win the 2022 NECC Softball Championship. They went a perfect 3-0, entering the winner's bracket on day one and only needing the minimum three games to take home the title.

The Lynx earn an automatic bid into the NCAA DIII Softball Tournament and are awaiting to find out their first round matchup.

Senior first baseman Antonia Kieran of Wilmington, is batting .252 on the season with one home run, 19 RBI and also has swiped five base.