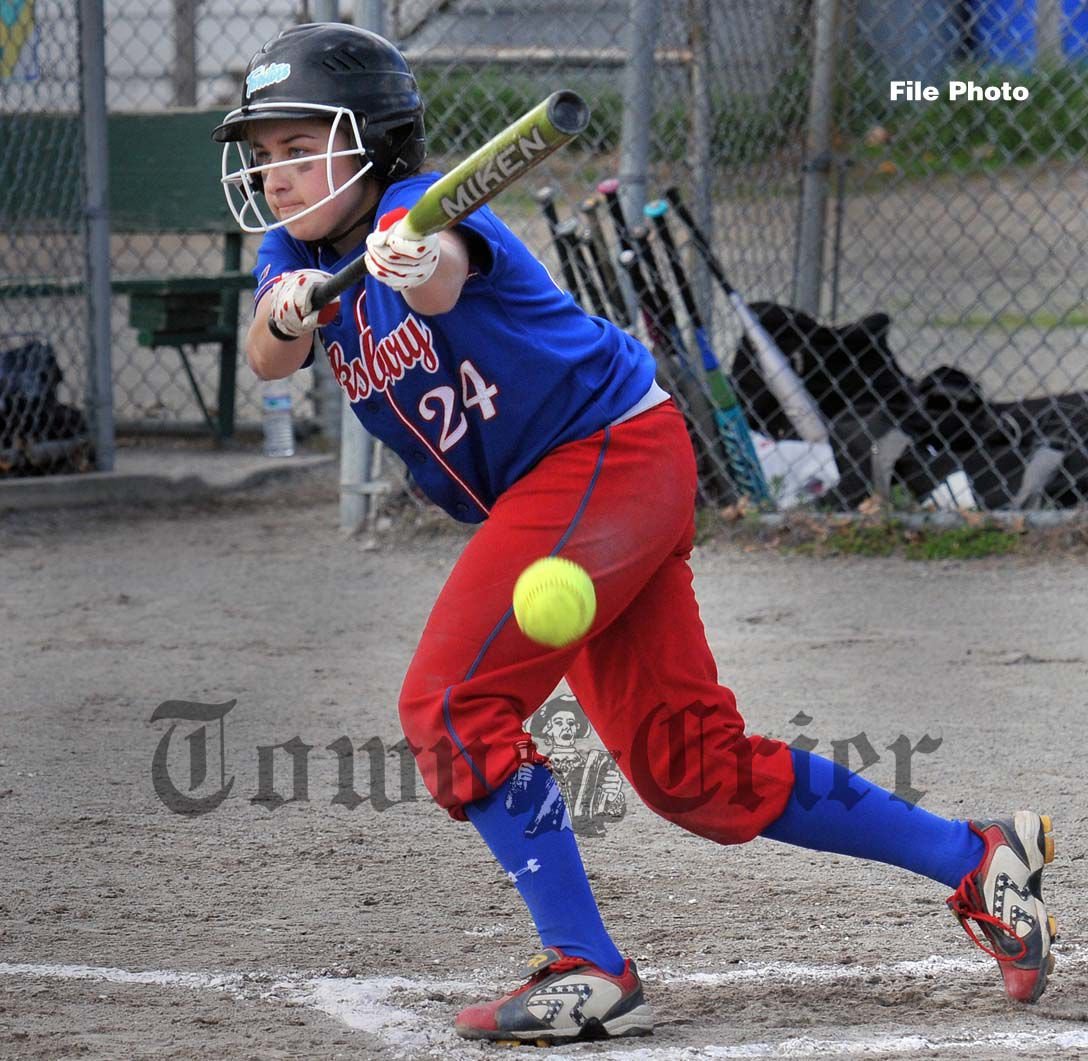 Sheri Liggiero is known for her bunting skills, speed and defense while playing for the TMHS Softball team. She is one of the outfielders named on the Town Crier’s All-Decade Team. (file photo). 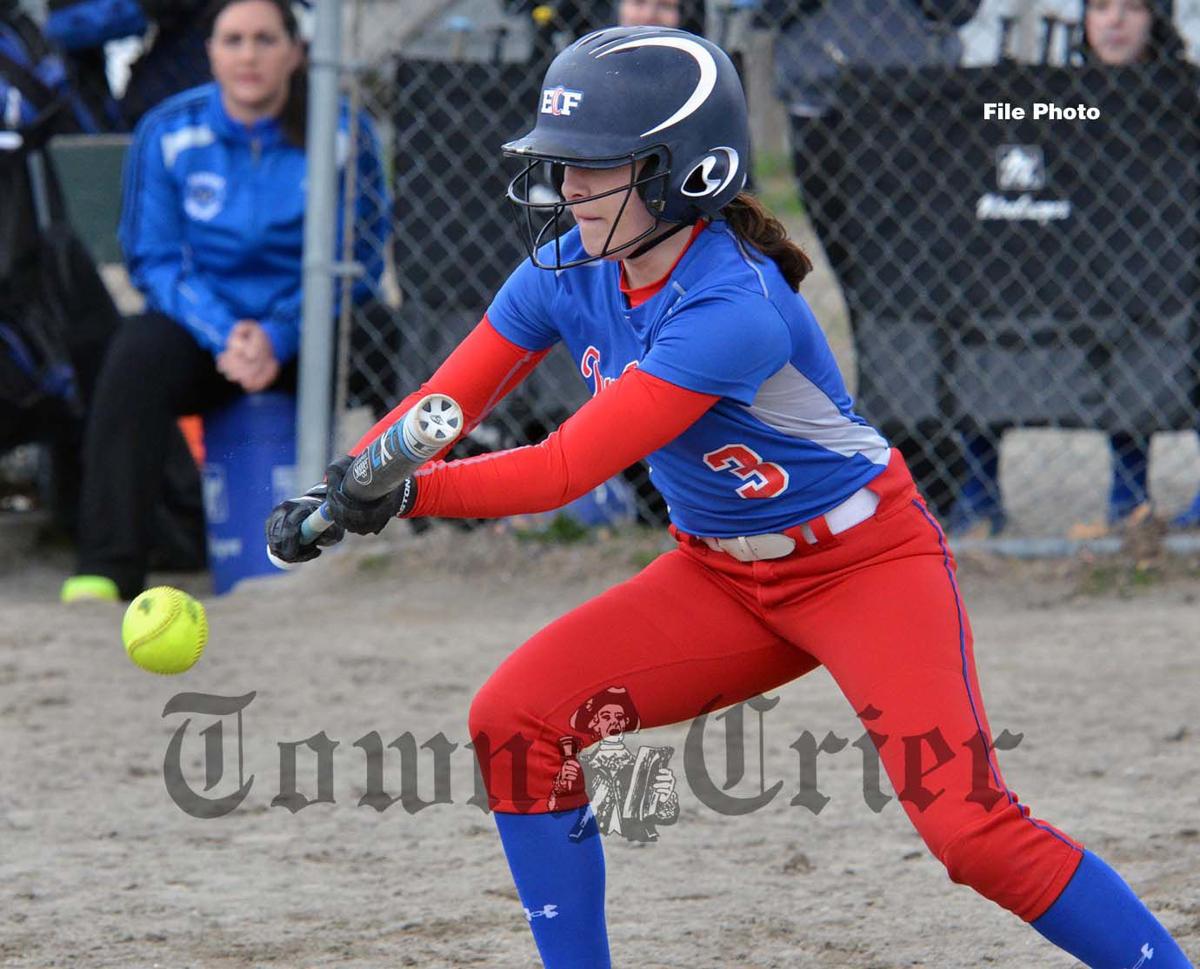 Marissa Doherty is known for her bunting skills, speed and defense while playing for the TMHS Softball team. She is one of the outfielders on the Town Crier’s All-Decade Team. (file photo). 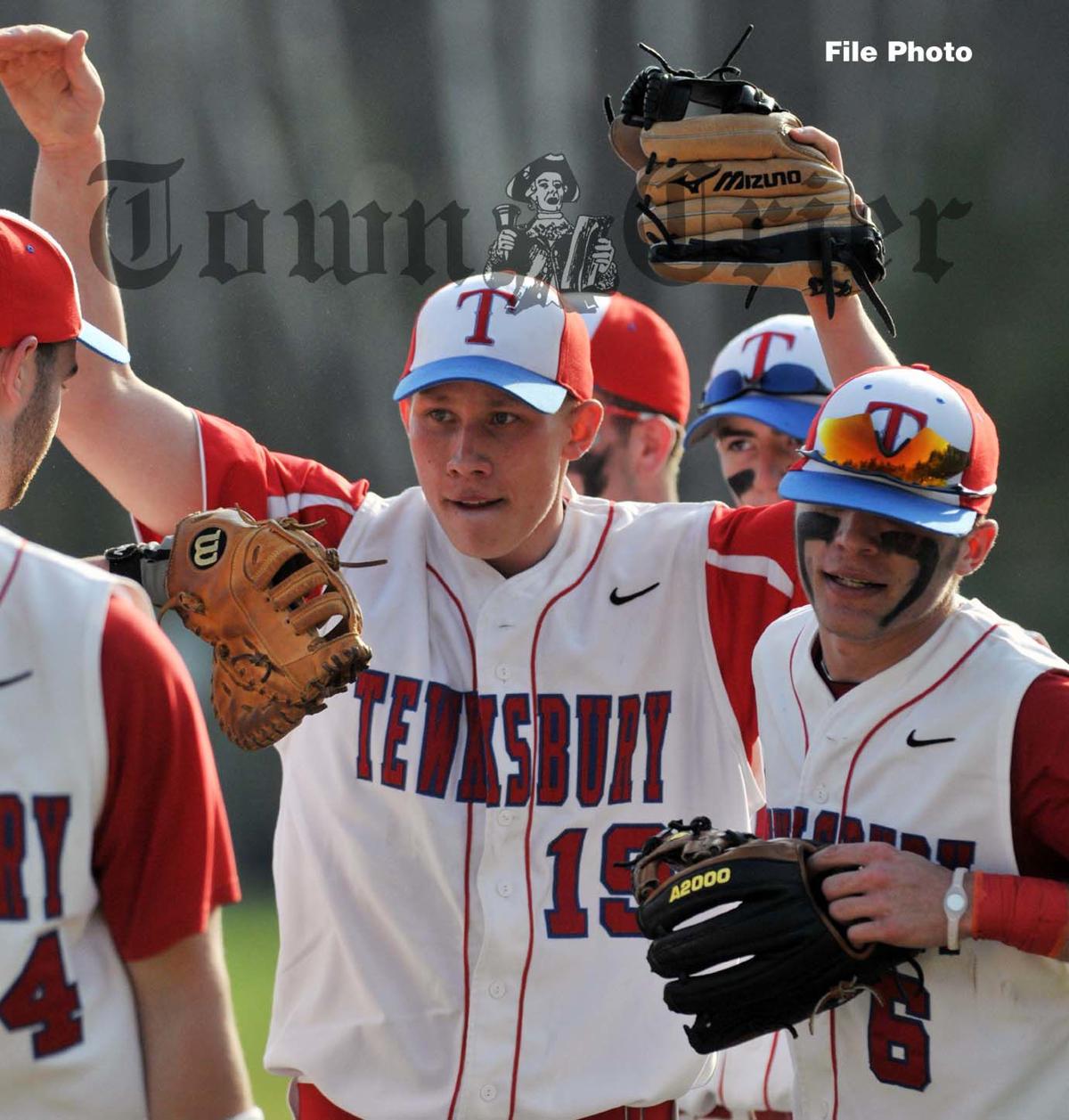 Ryan White gets congratulated after he caught a fly ball and then threw out a runner at home to end an exciting victory over Wilmington. White is a member of the Town Crier’s All-Decade TMHS Baseball team. (file photo). 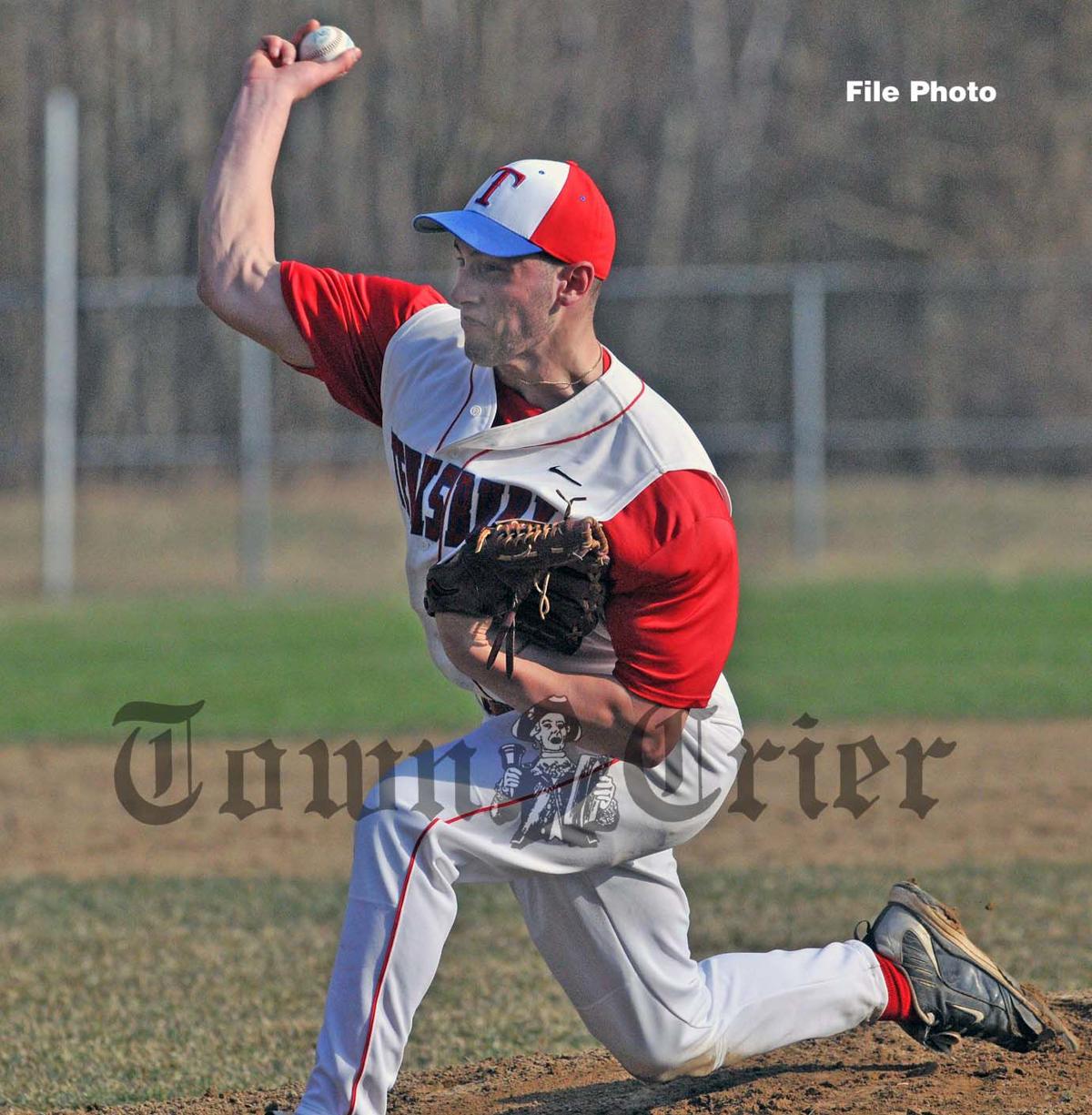 Matt Luppi unleashes a pitch. He is a member of the Town Crier’s All-Decade TMHS Baseball team. (file photo).

Sheri Liggiero is known for her bunting skills, speed and defense while playing for the TMHS Softball team. She is one of the outfielders named on the Town Crier’s All-Decade Team. (file photo).

Marissa Doherty is known for her bunting skills, speed and defense while playing for the TMHS Softball team. She is one of the outfielders on the Town Crier’s All-Decade Team. (file photo).

Ryan White gets congratulated after he caught a fly ball and then threw out a runner at home to end an exciting victory over Wilmington. White is a member of the Town Crier’s All-Decade TMHS Baseball team. (file photo).

Matt Luppi unleashes a pitch. He is a member of the Town Crier’s All-Decade TMHS Baseball team. (file photo).

The Tewksbury Memorial High School Softball team came so, so close of winning a state championship back in 2016, which highlights an incredible first eight years of the decade.

Then came the three big years. In 2013, Tewksbury beat Wakefield, Danvers and Reading before losing to Burlington in the North Final. The next year, Tewksbury topped Newburyport, Arlington, Danvers and Dracut, before losing to the eventual state champions of Bellingham, 2-1. Two years later, Tewksbury defeated Wakefield, Danvers, Burlington, Swampscott and Abington, which put the team into its first ever state final, losing 3-2 in 8 innings to Hampshire Regional.

As far as this All-Decade Team goes, this roster is certainly as strong as boys hockey and girls indoor track. It would be impossible for opposing teams to get any ball in the outfield against these three defenders and offensively, wow, what a team of incredible speed and power.

P: Shannon McLaughlin – The last few years, she was featured a lot in this newspaper with her tremendous success at St. Anselm. In high school, it's easy to describe her – she was a gamer. In 2014, she was the MVC and Lowell Sun Player of the Year with an 18-7 record and 1.70 ERA with seven shut outs. She also batted .423 with seven extra base hits that season.

C: Kayla Von Kahle – She was converted from first base to catcher and behind the plate she was known for her defense and did a great job of blocking balls in the dirt and throwing out runners. She was a key figure in the team’s run to the state final.

1B: Bella DeRoche – To steal Ron Drouin's line, "Bella could play for me anyday." She could hit, hit and hit. Once she changed up her hands, she delivered nothing but line drives.

2B: Brooke Hardy – In 2012, she batted .524 with three homers and 26 RBI and she followed that up with a .507 average with three homers, 16 RBI and 35 stolen bases the following year. In the post-season, she absolutely dominated games. She went to Jacksonville University, playing several years there.

3B: Kirsten Dick – There were several other strong candidates for this spot, but in 2016, she helped the team advance to the state final where she batted .356 with three home runs and scored 18 runs. She went on to have a terrific career at Framingham State.

SS: Tiffanie Marsh – She also got a lot of TC press during her collegiate days at Framingham State, but in high school, she was Miss Everything – she pitched, played short and played third. In 2012, she batted .430 and in 65 at bats, she struck out one time, which is such a fascinating statistic. In 2013, she batted .407 and was the MVC Division 1 Player of the Year.

OF: Ally Greene – She makes the second All-Decade team after a great indoor track career. In softball, she had 49 stolen bases during the 2011 season – 49 in 23 games. She also had 44 hits, meaning she averaged almost two hits and two stolen bases per game. She was spectacular in the outfield and went on to have a sensational career at UMass-Lowell.

OF: Sheri Liggiero – She played in the same outfield with Greene and it was awesome to see. She finished that season batting .461 and then in 2012, she was named to the MVC All-Conference team for the third straight year, batting .466 with seven extra base hits.

OF: Marissa Doherty – Personally, I think she was really underrated in all sports. In softball, she had such incredible speed and was always terrific defensively, but sometimes at the plate, the bat was taken away from her with attempts to slap, instead of just hitting, which I thought she certainly could do. A terrific all-around athlete, she is playing softball at Assumption.

DH: Adrianna Favreau – I'll never forget when 'Doc' embarrassed her at the sports banquet her freshman year saying she will be 'something special'. While she pitched throughout her entire career, her speciality was with the bat. Girl oh girl can she hit. She batted .507 as a senior, and is currently tearing it up at Endicott College.

In terms of wins and losses, this was a very difficult decade for the TMHS Baseball team. The Redmen were fortunate to have one .500 season at 11-11 in 2011 and then nine other seasons the team finished with records below the .500 mark.

Under three different coaches, Tewksbury finished the decade with a record of 71-136, with no league titles, while going 2-5 in the playoffs, making it four times either by the Sullivan Rule or finishing second place in the MVC Division 2 Conference.

In this decade, Tewksbury went 1-1 in the state tournament in 2011 with a win over Marblehead and an 9-8, 11-inning loss to Danvers, and then beat Wayland before losing to North Andover the following year. Since then were three first round defeats, twice to Danvers and once to Beverly.

In the 2000-09 decade, the program finished 130-82 with seven league titles, eight state tournament appearances and 16 or more wins four times.

As for this All-Decade team, despite the tough losing seasons, there's certainly some talent with about half of this team continued to play at the collegiate level.

P: Jon Chotkowski – During his senior season, he was named All-Conference after finishing the year with a 6-2 record and a 1.98 ERA. In 53 innings, he had 53 strikeouts. He accounted for all but one of the team's total victories on the season. He went on to play in college, but dealt with several injuries to his throwing arm.

P: Matt Luppi – He was hampered with injuries his senior year, but leading up to it, he was pretty dominant when he pitched, especially his sophomore year. I'll never forget the home run he hit against Wilmington in the state tournament. He went on to play at UConn.

P: Jack Theriault – He was never overpowering, but Theriault was a pretty solid ballplayer. He could pitch, play some infield and could hit. He just fell victim to playing on some teams that didn't win many games. He was slated to play in his senior season this spring at Babson College.

P/1B: Sean McCarthy – He was named a two-time All-Conference selection in 2010 and '11. He was extremely tough on the mound and would take the ball anytime it was handed to him. A southpaw, McCarthy pitched some real gems for the Redmen during his career, and when he didn't pitch, he would play first base and help out with the bat.

C: Cam Oliveira – He was also voted a two-time All-Conference player, who could also pitch and play third base. He epitomized what a TMHS Baseball player was all about – just a dirtdog if you will. He went on to have a terrific career with Southern New Hampshire University.

2B: Joe Hulme – Just a real steady player, who always gave it his all. He was a league all-star in 2011. After high school, he went on to play at Wentworth and ranked first all-time in many offensive categories.

3B: Joe Csokmay – He made the reserve All-Decade Hoop squad and now he makes it as the best third baseman of the decade in my opinion. He was just solid as a rock at the hot corner, with the bat, and just a really nice kid, who I always enjoyed chatting with. He went on to play mostly first base at Salem State University.

SS: Dominic Rosado – He was a four-year player for the Redmen who usually batted lead-off. He possessed strong speed and was an all-star during the 2014 season. He went on to play the outfield at Salem State University.

OF: Chris Andella – I believe I called him 'Joe' most of the time, but if you look back at previous TC articles, one aspect that was not a mistake was he seemed to go '3-for-4' almost every game. He was just a real solid offensive player during his time.

OF: Ryan White – He played a lot of right field and also saw some time on the mound. Offensively, when he connected, it went a long way. He had a real strong arm as well but battled injuries towards the end of his career.

OF: Cam Legvold – I remember covering him when he was on the Little League All-Star team, and he carried that success over to a fine high school career as he was named a league all-conference and all-star mostly as a center fielder, but he did pitch as well. He is now playing at Nichols College.

DH: Alex Hamilton – Known more for his football skills, Hamilton started one season off 0-for-17 and got so hot, that he finished the season batting .270. When he connected, it also went pretty far.

OF: George Lehner and Frank McLaughlin.