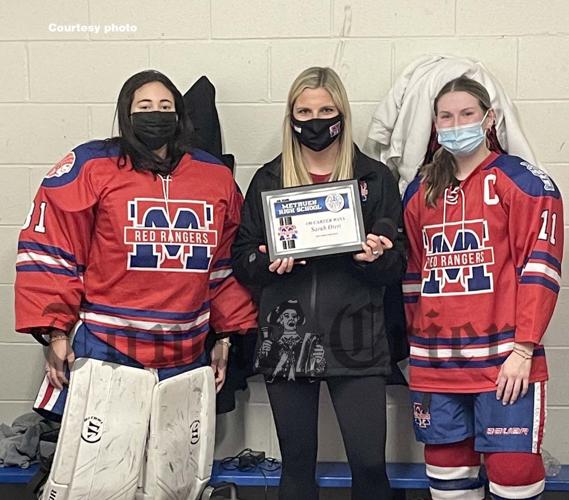 On Monday afternoon, Tewksbury/Methuen Co-Op Girls Hockey coach Sarah Doucette was given a plaque by the respective Athletic Directors Ron Drouin and Matt Curran after she won her 100th game in just her seventh season as head coach. Presenting her the plaque after the 8-1 win over Masconomet Regional are co-captains Michelle Kusmaul, left, and Jessica Driscoll, right. (courtesy photo/Ron Drouin). 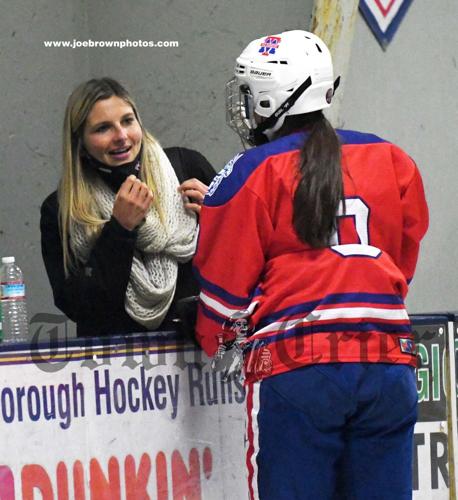 On Monday afternoon, Tewksbury/Methuen Co-Op Girls Hockey coach Sarah Doucette was given a plaque by the respective Athletic Directors Ron Drouin and Matt Curran after she won her 100th game in just her seventh season as head coach. Presenting her the plaque after the 8-1 win over Masconomet Regional are co-captains Michelle Kusmaul, left, and Jessica Driscoll, right. (courtesy photo/Ron Drouin).

HAVERHILL – When Sarah (Oteri) Doucette was named the third girls' hockey coach in four years of the newly formed Tewksbury/Methuen Co-Op girls' hockey team before the 2015-'16 season, then Methuen Athletic Director Jim Weymouth and Tewksbury AD Ron Drouin thought that she would be the perfect fit to take the program to the next level.

Certainly they were correct.

Now in her seventh year at the helm, she already had a nice collection of hardware, including a state championship, a state finalist and four league titles. On Monday afternoon, she added a plaque to that Wall of Fame, picking up her 100th career win as the Red Rangers trounced Masconomet, 8-1, in a non-league game played at the Paul Gilmartin Arena.

“It just shows how many people care about our program. I care about our program too, obviously. (The 100 wins) doesn't happen without talent and caring players who buy into everything that we preach and that has to be first and foremost,” she said. “We have been so lucky to have such great kids, talented, but just really great kids. I feel super supported by the athletic departments, our families and the parents, my assistant coaches, so I think this just shows how many people support me and support the program.”

Before being named the head coach at the age of 23, Doucette played ice hockey at Andover High School from 2006-'10 where she was the team's leading scorer all four years. She was named a Greater Boston League/MVC All-Star all four years and All-Conference selection three years. She was a Boston Herald All-Scholastic two years, was a two-year captain, and a three-time Team MVP.

She was also given the Hobey Baker Character Award and the Eugene V. Lovely Excellence in Athletics Award from Andover High in 2010. Two years before that she was nominated as a Boston Bruins Ice Hockey Sportsmanship Award.

From there she went on to play on the UMass-Amherst Club Team from 2010-'14, again leading the team in points all four years. She served as an assistant captain her junior year and as captain her senior year. She helped her team to the 2014 ACHA Women's Division 1 National Championship Game, where the team was defeated. She was a ACHA All-American in 2012-'13.

In addition, she represented Team USA in the World University Games in Trentino, Italy, bringing home a bronze medal.

When she was named the Red Rangers head coach, she was taking over a program that had success, with records of 8-7-3, 19-2-0 and 14-3-1 over the first three years, all state qualifying teams. The 2014-'15 team was led by current professional player Amanda Conway, who led the entire state with 86 goals. She graduated, while other talented players vacated to play Club Hockey.

Those obstacles never stood in her way – instead she built her own program from the ground-up. She believed in being prepared, outworking the opposition and playing as a team. More importantly she believes in discipline, on and off the ice.

“I think I'm a little bit more aware of many different things (than I was in my early years),” she answered. “In the first two years or so, I felt like I was coaching not to mess up and now I'm a bit more aware of what we can do and what we can accomplish. I think my philosophy has remained the same which has always been to make sure that I am prepared. I never want the girls to feel that they weren't prepared and for me I want to make sure that I give them every opportunity to be the best that they possibly be. As a coach you're going to win some and lose some, but I want to make sure that I put them in the best situation to win that day.”

That she has done. In her first two years the teams finished the regular seasons with one loss. The 2016 team finished 1-1 in the state tournament and the year after the Red Rangers lost in the sectional semi-finals. Both of those seasons, the team competed in Division 2 before being bumped up to D1 for the 2017-18 season.

That followed with two magical seasons, reaching the Division 1 state final in 2018 losing 1-0 to Woburn only to follow up with the dramatic 2-1, double-overtime win over No. 1 seed Austin Prep to capture the state championship title, the first co-op team to ever accomplish that feat.

“It's been nice that we have had such different seasons. We started in Division 2 and then we moved to Division 1 and had success. We went to the Garden and didn't win it, then we won it all. We then graduated a ton of talent, but still had a ton of seniors who came and performed,” she said. “Even this year we are struggling a bit record wise, but every season there seems to be so much good, which is just awesome.”

Since the two teams that went to the state championship game, the Red Rangers have lost an incredible amount of talent with likes of Kelly Golini, Julia Masotta, Cassidy Gruning of Tewksbury and then Brenna Greene and Kaia Hollingsworth of Methuen, to name a few. Yet despite that, the team has followed up records of 12-5-6 and 7-5 (abbreviated COVID season) and now the current 2-5-2 mark.

After winning the state championship and being named the Town Crier's Coach of the Year for the second straight time, Drouin said that Doucette, “Got her team to play to its maximum potential all year long. With all the returning players she had, that team had a target on its back each game, Sarah had them prepared for each game, buzzed around the ice, and played its best on the biggest stage. She does a tremendous job for us. The culture that Sarah has created, the friendships she helped develop, and the bar that she has set for excellence, are really incredible. She is a pleasure to work with.”

Certainly Drouin and Weymouth had hoped that the program would elevate to the next level when they hired Doucette, and who knows if either of them saw this kind of success. Doucette said she never saw it coming.

“Not at all. I am so fortunate, so fortunate and there's no other team I would ever want to coach. Having tons of success has been awesome, but there's just great people and I'm around such great people every day and that makes a big difference,” she said.