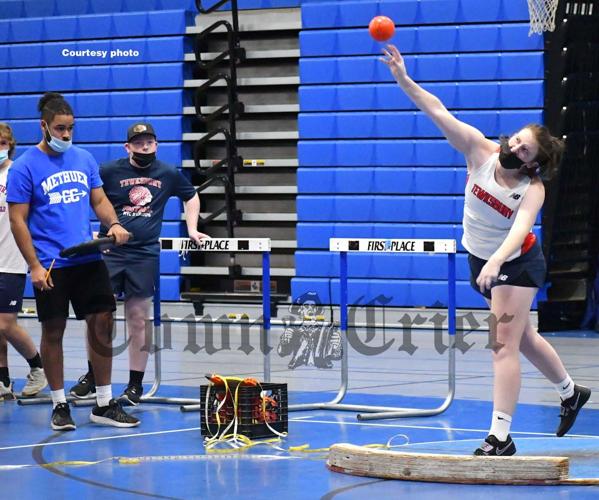 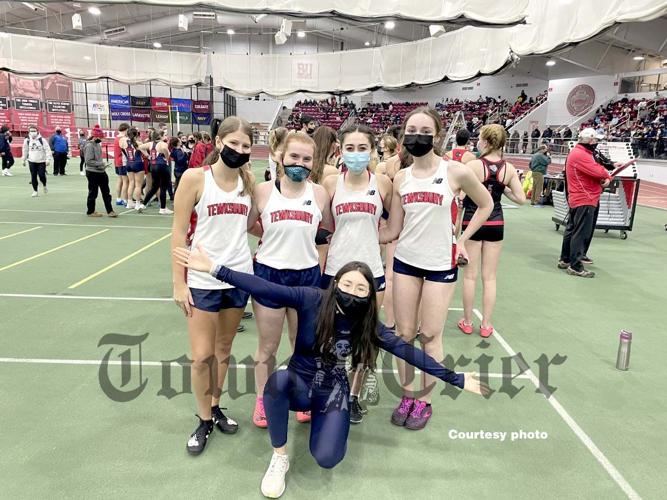 BOSTON – Last Wednesday afternoon, the Tewksbury Memorial High School Girls' Track-and-Field team finished up its dual meet season falling to both Chelmsford 53-43 and Billerica 63-36 to finish with a 5-5 overall record.

Despite the two losses, head coach Fran Cusick said there were a number of noteworthy performances — all of the Merrimack Valley Conference teams race against each other and then teams scores are taken from those dual match-ups — none bigger than Noelia Cura. She had a busy and productive day, finishing fourth in the 55-meter dash at 7.79 seconds, sixth in the high jump clearing 4-08 and then was part of the second place 4x200 relay team along with Kimsan Nguyen, Cassidy Paige and Carrina Barron with a collective time of 1:52.86.

“Noelia continues to be our biggest point scorer. In this race, she ran another incredibly impressive time in the dash, 7.79, which is a lifetime personal and it puts her up there on our all-time list of athletes in the dash. It’s hard to say for sure as not all of our results are updated, but I think her race is certainly in the top 15 all-time. Not only that, but Noelia came back to high jump 4-8 and then ran the fastest leg on our 4x200 team in 27.0 seconds flat.”

The performance by that relay team certainly was also another big highlight.

“Second place in the MVC is very impressive, as we have one of the more competitive leagues in the state. Kudos to coaches (Lauren) Polimeno, (Cassie) Froio, (Jill) Paige, and Maria Da Silva for getting this crew ready to run, as our handoffs are improving a ton week-to-week,” said Cusick.

Both Kimsan Nguyen and Cassidy Paige excelled in other events as well. Nguyen was seventh in the 300 coming in at 44.86.

“It was a breakthrough performance for Kimsan. This was nearly a two second improvement over her first race, a time of 46.61. Not only that, but she really went for it and competed out there. Chelmsford has a very good 300-meter runner named Naomi D’Souza and Kimsan very nearly took her down, finishing behind her by just a half second. Keeping things in the family, Kimsan’s sister Maisan also had herself an excellent day, running 2:00:37 in the 600, which was a six second personal record (to finish 18th overall).”

The other big performance came from senior Molly Cremin, who was third in the two-mile at 12:29.03.

“Molly had a three second personal record and this was a great race all around, Molly got out pretty quickly in the first mile and then found herself in a battle with Anna McElhinney of Billerica, who has run well under 12:00 in the two-mile before. After the mile, everyone started to slow down a little bit, but Molly was able to stay engaged and finish very strong the last lap. In fact, she was able to run her last lap in a blazing fast 38 seconds, to pass Anna and grab the third place spot. This is a big step for Molly going forward, as I believe with another month of training under her belt she can be in the mix for breaking 12:00 in this race.”

Her sister Colleen had a big personal record herself finishing 26th in the mile at 6:42.55.

“Maci Chapman ran an excellent 5:38 mile. This was a far better race than her debut mile, where she ran 5:50 and there was a ton of bumping and jostling around. In this one, Maci ran like the savvy veteran she is. The pace started out very hot, with the first ten athletes all going out at sub 5:20 pace,” explained Cusick. “Rather than follow the lead pack, Maci wisely chose to hang back and, when the athletes in front of her inevitably began to tire, she just started passing people. Big step in the right direction for Maci.”

“Ava Piccolo continues to be a consistent presence in the MVC. She didn’t personal record today, but threw a solid 27’09. Delia Conte had a huge day in shot, with about a four foot personal record,” said Cusick.

After ten days off, Tewksbury will be back in action this Saturday, competing in the Division 4 state relay meet.

“I feel pretty good about our team; we have a smaller roster than we’ve had in the past and have, like all teams, been dealing with the challenges of the pandemic,” said Cusick. “But the people that have been here have worked hard and are seeing some big improvements, so I’m optimistic about what the next month or so will bring as we get into the more important meets of the year.”