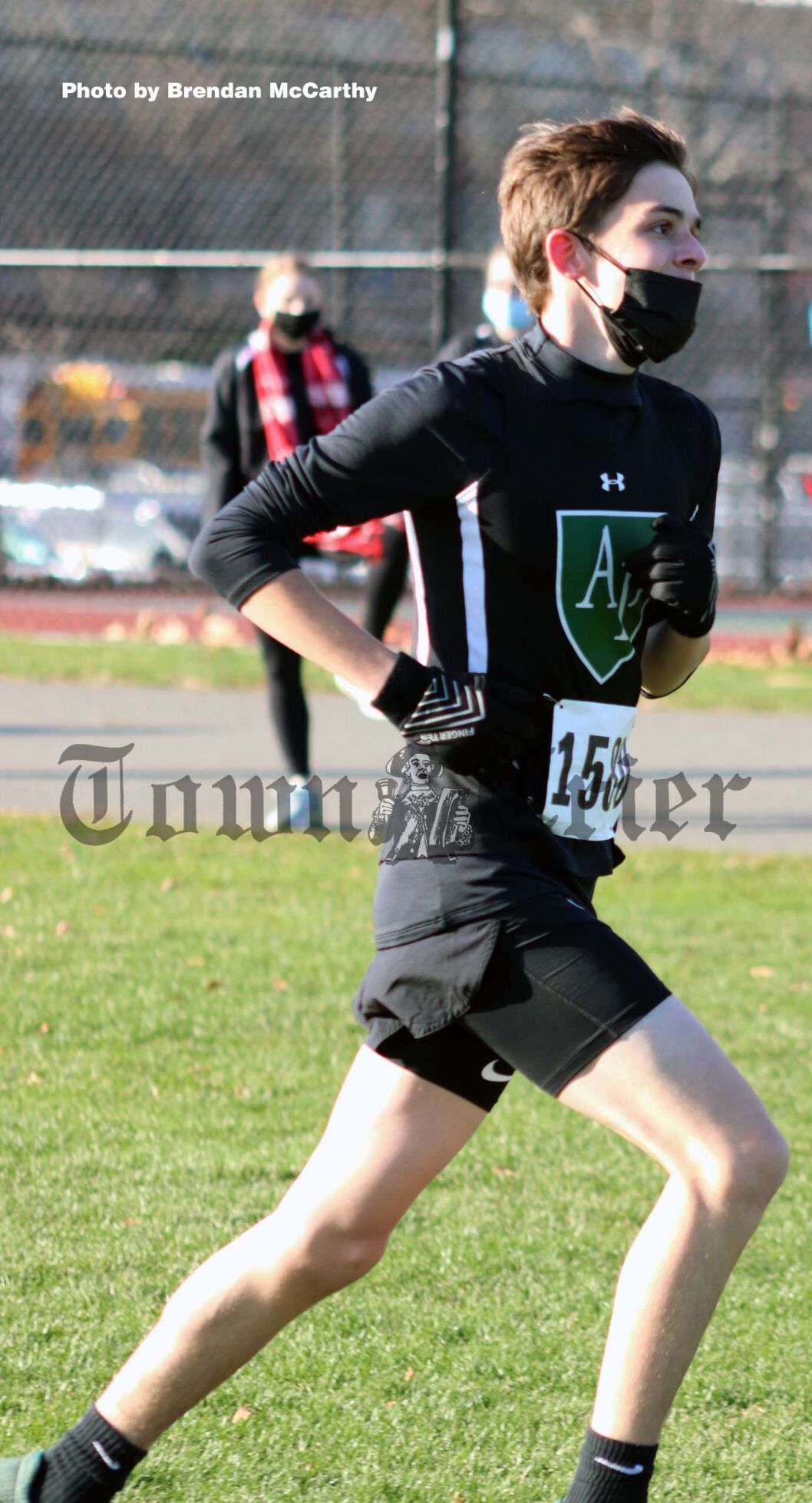 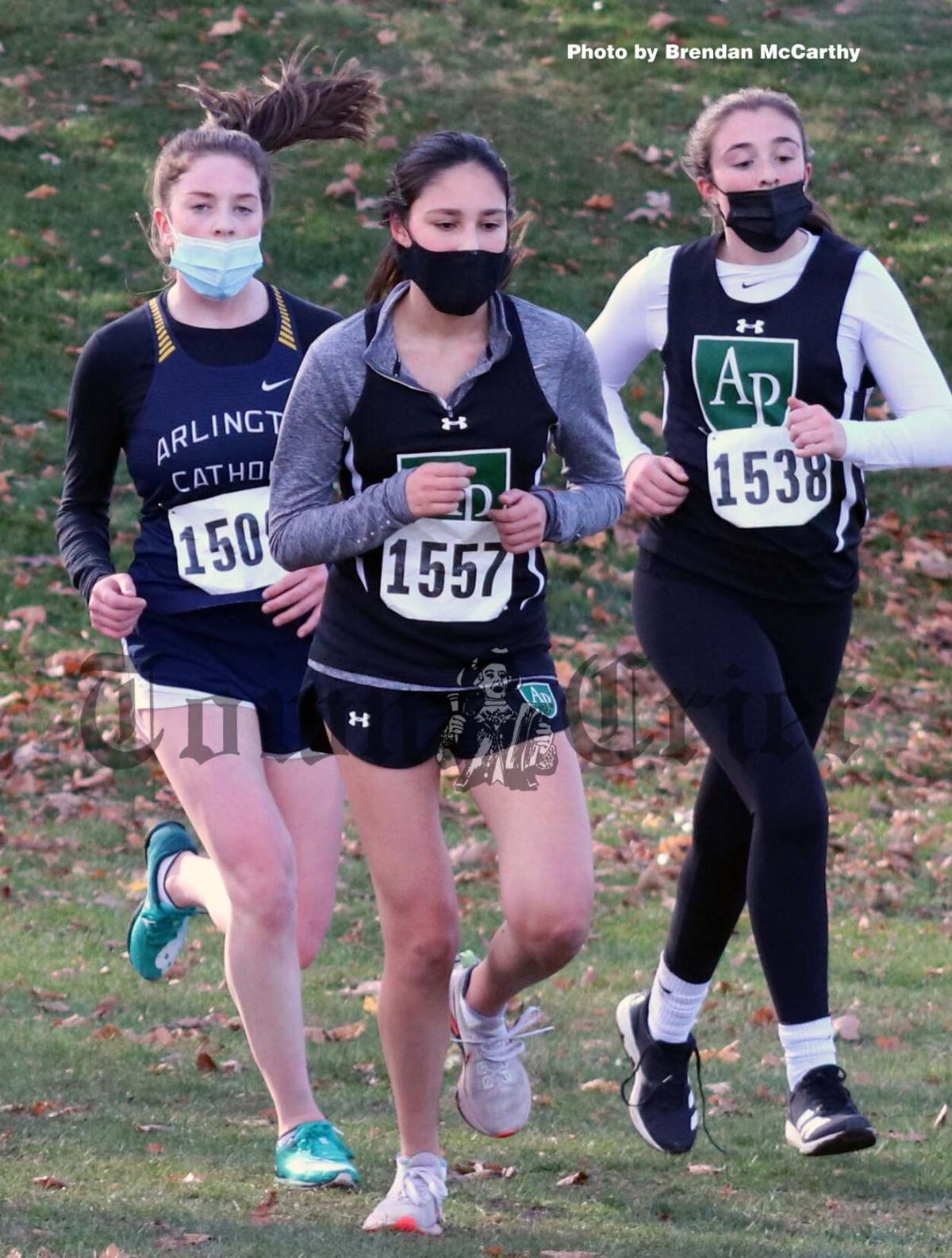 The CCL split up into two divisions this year and both the Cougars' teams celebrated which included a handful of locals having a major role in both of the team's success.

“I was incredibly pleased and excited that we were able to put together not only one, but two wins at the CCL Meet,” said head coach Nicolle Renick, a Wilmington resident. “I knew if we ran our best and had a few personal records, we could have a shot at winning at least one of them, but we were going up against a really strong Arlington Catholic girls team and St. Mary's boys team.

“In the end, it was our depth that won out for both races. Our bottom three or four runners made all the difference that day, and really drove home how important every member of the team really is. It was a great feeling and a great way for our ten seniors to finish their careers.”

The boys team finished 2-1 during the abbreviated regular season and were able to put it all together in this one meet. DJ Bresette of Tewksbury finished 10th overall which is an automatic spot onto the CCL All-Star team. He was followed by Mike Doherty (17th) and John Dugan (21st), both of Wilmington.

“DJ Bresette was by far our most improved boy from last season. Last year his personal record was something like 23 minutes — in his first meet this year he went sub-20 and didn't look back,” said Renick. “We have a strong junior class of boys – including the overall champ Steven Galatis — and DJ has been our number four runner for the most part, as he was on Thursday. He had a breakout race at the Fresh/Soph League Meet and was our top guy that day. That fueled him to run a 37 second personal record on Thursday in 19:16 and get that last medal spot.

“Mike Doherty has been consistent for us, but has been back and forth with illness this season, so I feel like he didn't get a fair shot to shine like he would have if he were healthy. He was our top guy in our dual against a tough St. Mary's team, though, and I was really proud of the way he ran that day.

“Jack Dugan was a newcomer this season after having shown glimpses of potential in the middle distances during Indoor Track last winter. He was able to take his time down from mid-22 (minutes) to mid-20 by the end of the year, pretty incredible in such a short season. He's gaining the confidence he needs, and he'll definitely be a top seven guy consistently next season.”

The girls team finished with a perfect 3-0 record and then polished it off with the league championship win. Sydney Pilla and Molly Dugan, both of Wilmington, finished sixth and seventh overall, both earning CCL All-Star honors.

“Sydney Pilla was the overall winner against Matignon and was our number one or number two girl all season,” said Renick. “She had a personal record in our CCL league meet of 22:20. Molly Dugan is a captain and was our number three runner all season because she was battling some shin splints and leg soreness, but ran a season best by a full minute to finish right behind Sydney in 22:35. She looked so strong and comfortable the whole time, and her placement was a big reason why we were able to beat Arlington Catholic by one point to take the CCL North title.

“We are only losing Molly and one other senior from our top seven. We have some great young talent — a seventh grader, eighth grader, a freshman, and a couple other sophomores in addition to Sydney that are consistently in our top eight or nine girls right now. They are young and hungry to work hard for us in the future and fill Molly's shoes.”

Of the five locals, Molly Dugan is the lone senior, while Doherty is a junior, Pilla, Bresette and John Dugan are sophomores.

Overall, abbreviated season and all, Renick said things went well despite all of the obstacles with the modifications due to COVID-19.

“I thought our season went well, despite everything going on. We had a delayed start beyond the MIAA's date and an additional quarantine period, but the kids did a really good job of coming into the season prepared, and completing workouts on their own when we weren't able to practice together,” said Renick.