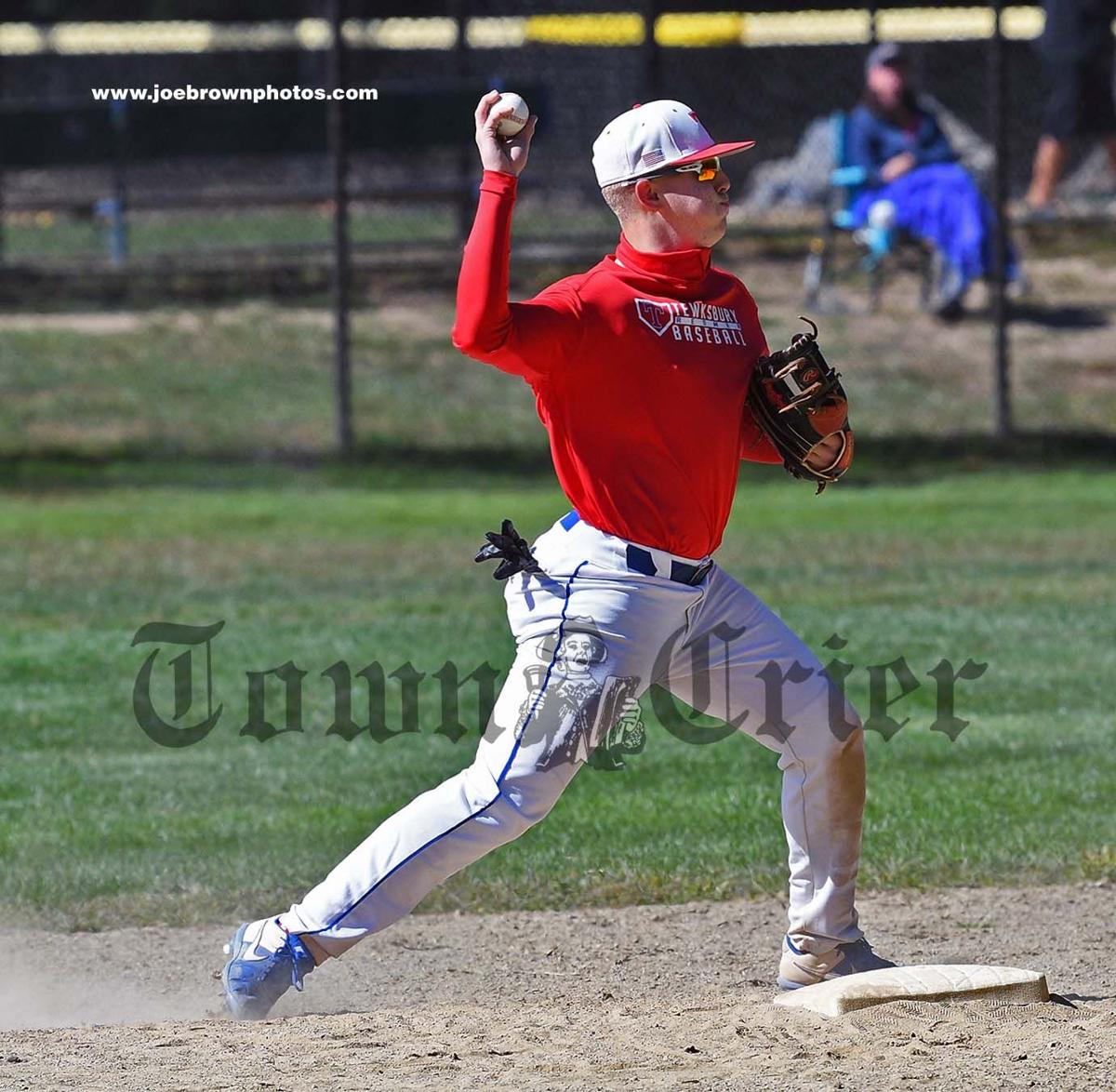 Andrew Timmins makes the first out in an attempted double play, but the throw was not in time to complete it during a recently played Tewksbury Fall Baseball game. (photo by JoeBrownphotos.com). 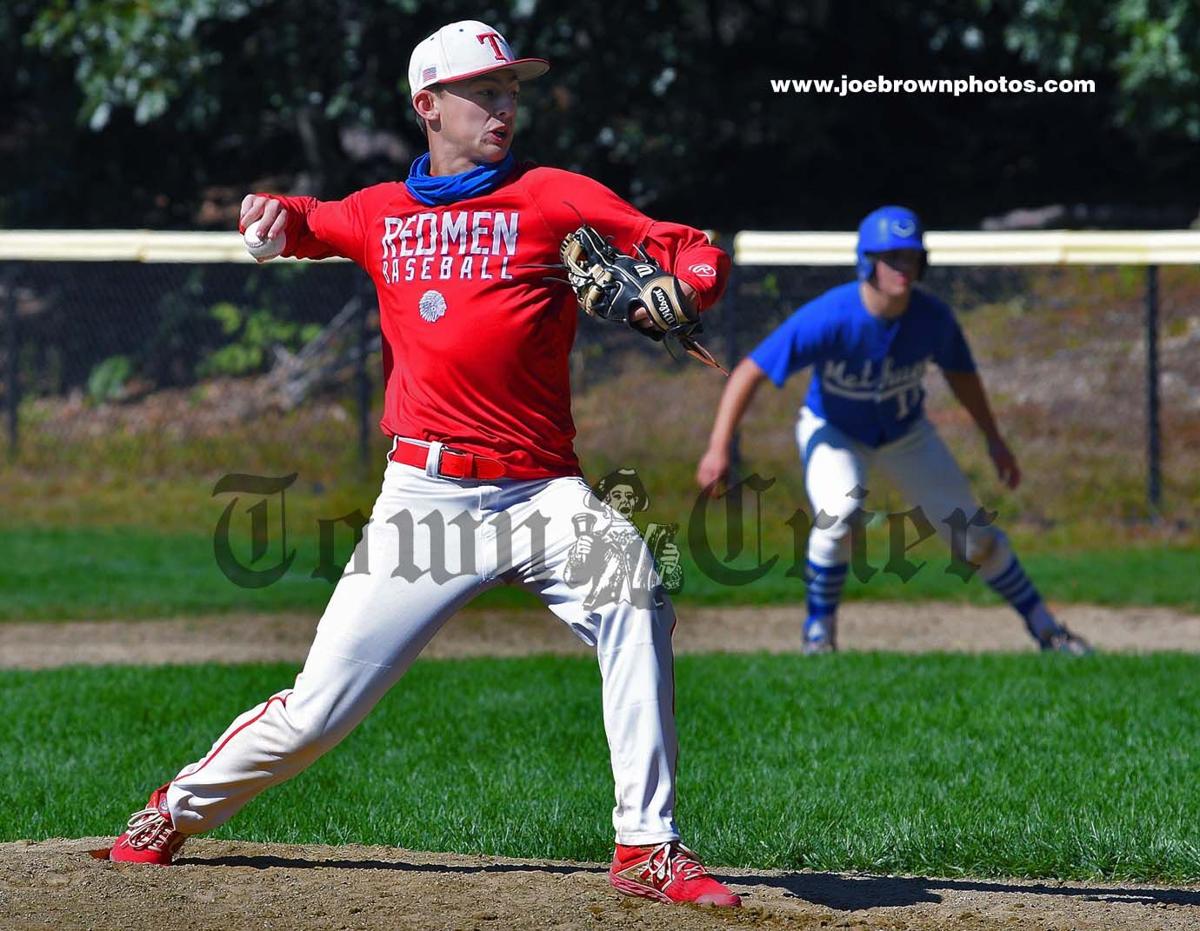 Michael Sullivan is about to unleash a pitch for the Tewksbury Fall Baseball team in a recently played game. (photo by JoeBrownphotos.com)

Andrew Timmins makes the first out in an attempted double play, but the throw was not in time to complete it during a recently played Tewksbury Fall Baseball game. (photo by JoeBrownphotos.com).

Michael Sullivan is about to unleash a pitch for the Tewksbury Fall Baseball team in a recently played game. (photo by JoeBrownphotos.com)

TEWKSBURY - Despite an 0-2 start to the Fall Ball campaign, the Tewksbury High team has displayed many positive signs to build on.

The problem to this point has been holding on to leads and closing out potential victories.

In Sunday’s game at Gage Field in Lowell, the host Red Raiders came up with five runs in the bottom of the eighth inning to take a 7-6 victory from the Redmen.

For the second week in a row, the Redmen broke a 2-2 tie with four runs to take a 6-2 lead, this time coming in the top of the eighth inning.

Tewksbury brought in its third pitcher of the game, Matthew Duggan, to start the bottom of the eighth (9 inning games). A couple of plays not made by the defense, a four-pitch walk and a solid single brought in one Lowell run, and left the Red Raiders a bases-loaded situation with no outs.

Duggan walked Matt Dussault and Matt Deroches to force in two more runs, and all of a sudden it was a 6-5 ballgame.

Jake Descheneaux hit into a potential double play up the middle, but the throw to first to complete the 4-6-3 twin killing went over the first baseman’s head, allowing two runs to score on the play as a whole, giving the Red Raiders the lead, 7-6.

Duggan got the next two batters on a strikeout and a ground ball back to the pitcher to keep it a one-run game headed to the ninth inning.

Lowell reliever O’Neal Jimenez, who had just surrendered four runs to the Redmen in the eighth, was bolstered by the five-run rally. He set down Tewksbury in order to complete the 7-6 victory.

The first seven innings was dominated by pitching and defense, with Michael Duggan allowing just one unearned run in five innings, and Ryne Rametta allowing one earned run in two innings of relief.

The Redmen had their hands full with the Betty Brothers over the first six innings. Starter Adam Betty worked three shutout innings, allowing just one hit (to Adam Favreau) while getting all nine outs via strikeout.

Brother Steven Betty came on to start the fourth and he finished with two strikeouts that inning, while a batter who walked was picked off first base.

Tewksbury scored the first runs of the game when it scored twice in the top of the fifth inning. Aiden Crogan and Rametta worked walks to get the inning started, and Crogan scored on a one-out double to right field by Will McKay. Drew Timmons followed with a single to right to score Rametta for a 2-0 lead. McKay also tried to score on the play but did not get a good jump rounding third and was thrown out at home. Steven Betty got the fourth of his seven strikeouts to end the inning.

Lowell got one run back in the bottom of the fifth, taking advantage of a throwing error for the only blemish on Michael Duggan’s successful outing.

After a leadoff double, an overthrow on a ground ball to third allowed the runner to score from second base.

The Red Raiders tied the game at 2-2 in the bottom of the seventh. With two outs, Lee Descheneaux was hit by a Rametta pitch. Adam Betty, also Lowell’s best hitter, doubled to the gap in right-center, allowing Descheneaux to score all the way from first. Betty tried to take third on the play but was thrown out for the final out of the inning.

Tewksbury made its bid to win the game with a four-run eighth, the second inning of Jimenez’s relief outing.

With one out, Kyle McHugh launched a towering fly ball to right, that just kept carrying until it landed over the fence for a solo home run, the team’s first of the Fall Ball season.

McKay followed with his second hit, and he took second as Timmons reached on an error by the shortstop. With two outs, Michael Duggan singled to score McKay and send Timmons to second.

Favreau walked to load the bases and an infield single by Alex Arbogast led to two runs crossing the plate, as Duggan hustled home from second to give the Redmen a 6-2 lead.

Tewksbury lost that lead in the five-run Lowell eighth, but it easily could be 2-0 at this point with a little luck.

The Redmen will be back at it again, this Sunday (10 a.m.), when they travel to Tyngsborough for a game slated for Tyngsborough Elementary.