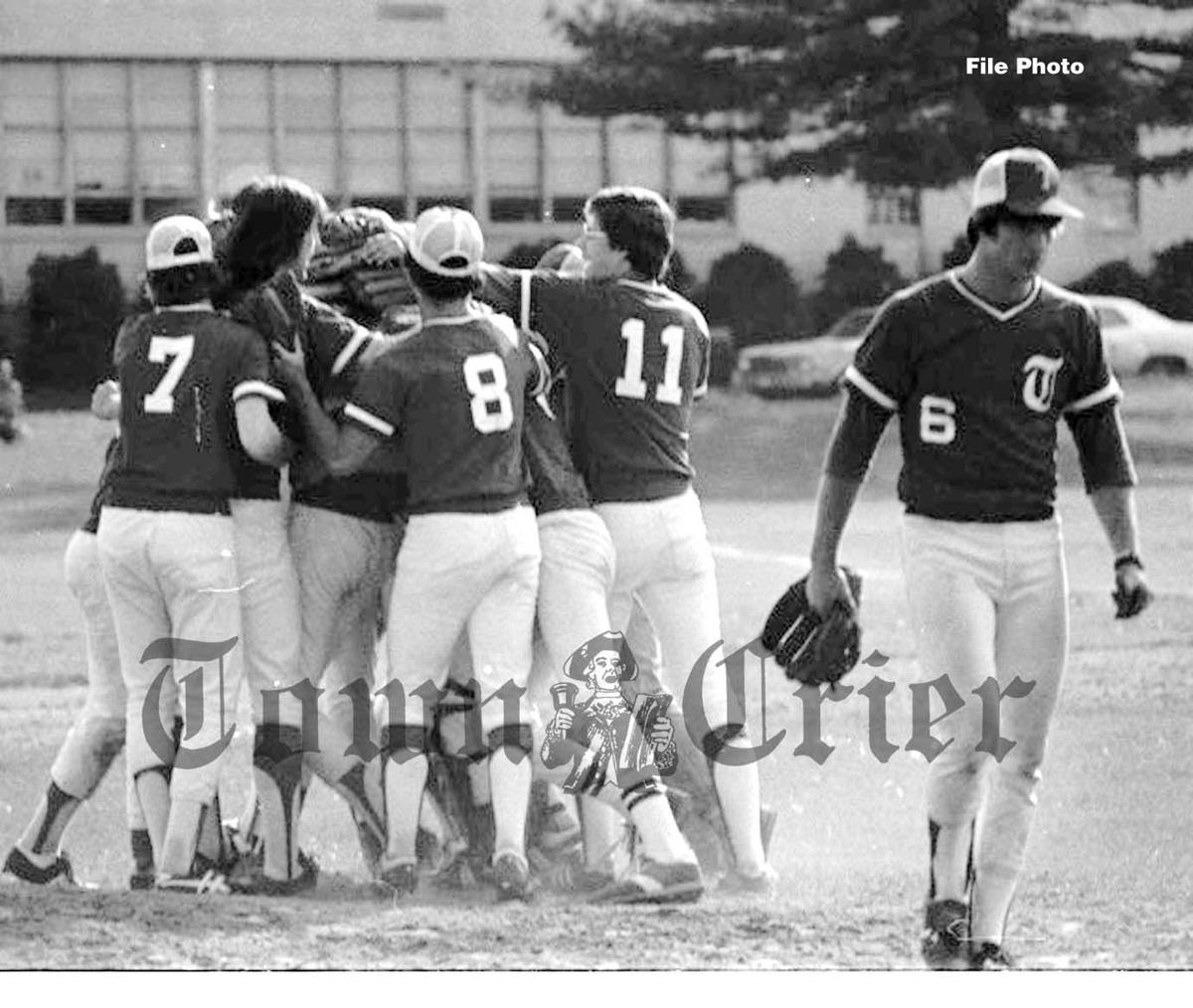 The Tewksbury Memorial High School Baseball team from 1980 celebrates after a win over Wilmington which qualified the team for the state tournament for the first time since 1973. (Town Crier File Photo/Rick Cooke).

In the May 28th, 1980 issue, Rick Cooke took a photo of then TMHS Baseball Coach John Bresnahan looking up to the sky during the team’s win over Wilmington, which clinched a state tournament berth for the first time since 1973. 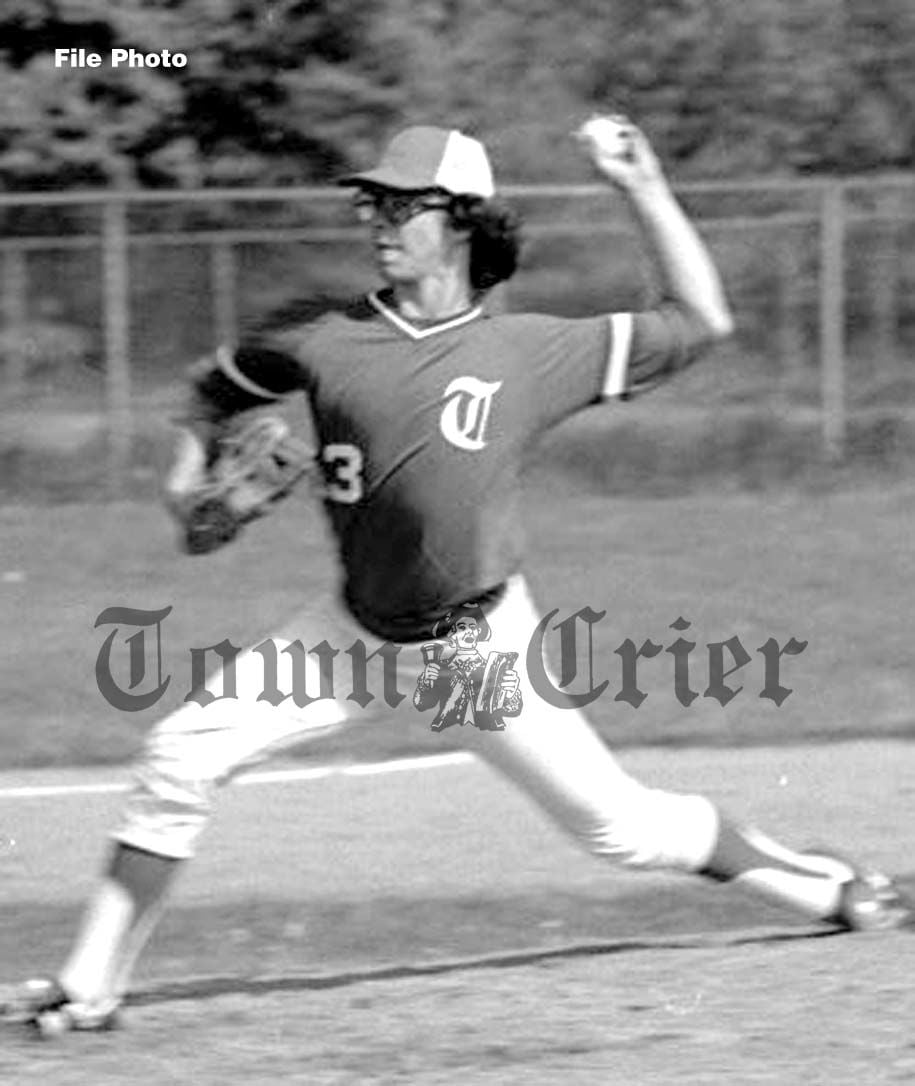 Steve Marsh, shown here from the 1979 season, tossed the clinching game for the TMHS Baseball team in the 1980 season, enabling the Redmen to advance to the post-season. (TC file photo/Rick Cooke).

The Tewksbury Memorial High School Baseball team from 1980 celebrates after a win over Wilmington which qualified the team for the state tournament for the first time since 1973. (Town Crier File Photo/Rick Cooke).

In the May 28th, 1980 issue, Rick Cooke took a photo of then TMHS Baseball Coach John Bresnahan looking up to the sky during the team’s win over Wilmington, which clinched a state tournament berth for the first time since 1973.

Steve Marsh, shown here from the 1979 season, tossed the clinching game for the TMHS Baseball team in the 1980 season, enabling the Redmen to advance to the post-season. (TC file photo/Rick Cooke).

Back in 1980, the TMHS Varsity Baseball team had a very successful season, finishing 12-8, as the team qualified for the state tournament for the first time since 1973.

The Redmen were led by tri-captains Bob Dascoli, Steve Marsh and Ron Wallace.

After a 12-7 regular season record, Tewksbury moved on to the Eastern Mass State tournament and faced a dynamite pitcher in Joe Reardon who helped lead Dom Bosco to a 4-1 win over the Redmen.

Below is the story from that game from the June 11, 1980 Town Crier edition, as well as part of a story that ran two weeks before that about the team clinching a spot in the tournament.

Teams don't win many games with one hit, and not many Merrimack Valley Conference pitchers have the good at-the-knee breaking stuff that Dom Bosco righthander Joe Reardon had Friday.

What one hit and a pitcher superior to most in your own conference usually adds up to is a loss in the Eastern Mass. Tournament. Not an embarrassment mind you, just a tough loss to a team that had the pitching and scored the runs when it counted most.

Dom Bosco had what it took Friday afternoon in the preliminary game at South Boston's Columbus Park, snapping a 1-1 tie with three runs in the bottom of the eighth inning to eliminate coach John Bresnahan's Redmen, 4-1, who were making their first tourney appearance since 1973.

"He was an excellent pitcher, he did just a super job," said Bresnahan after the game. Reardon, 7-2, with an 0.87 ERA, allowed only a leadoff single to Fred Mainey in the eighth inning.

Reardon finished with 10 strikeouts, and he and Marsh matched each other pitch-for-pitch through the middle innings. The only Tewksbury player to really hit the ball well off the Bosco ace was senior shortstop Don O'Brien (.429). "I hit the ball every time up, I just hit it right at people," offered O'Brien afterward.

"I wanted to get up another time," offered the TMHS All-Star shortstop. Unfortunately, Reardon never gave O'Brien the opportunity, closing the doors on the Tewksbury season when he fanned Marsh in the top of the ninth.

"He was the best pitcher we have faced all season. The pitching in the MVC wasn't so hot this year," offered O'Brien. "It took us a while for us to get used ot him. He had a pretty good curveball, but I don't think he placed it very well on me."

Reardon may have been up on the curve to O'Brien, but he was smack dab at the knees with it against every other hitter in the Tewksbury line-up. He got the low strike throughout the game and stuck with it, befuddling the TMHS hitters.

While the Redmen struggled with the bats, they shone with the gloves.

The Tewksbury second baseman was flawless in the field with four putouts and three assists. First baseman Ron Wallace played his finest game of the season in the field, saving several low infield throws.

"Steve (Marsh) pitched a super duper game, it's just too bad that he had that one bad inning," said the TMHS coach.

With the scored knotted at 1-1, the burly Bosco boys went to work rattling Marsh for three runs in the bottom of the eighth.

The winners rapped three of their six hits in the inning, the big blow a triple by Bob Walsh to get the winning rally started. Mark Walsh then walked and stole second, Steve D'Ossie ripped his second RBI single of the game for the game winner, and Dan Sheehan followed that up with a two-run triple for the insurance runs.

Don Bosco had broken out on top with a run in the bottom of the third when Mark Walsh doubled and D'Ossie singled him home. The Redmen came right back to tie the game without the benefit of a base hit in the top of the sixth inning.

Riddle led off with a walk, then Ron Baker had his fielders choice bouncer to secondbase thrown into left field to put Redmen at second and third with one out. Senior right fielder Bob Dascoli then laid down a perfect squeeze bunt to score Riddle with Tewksbury's last and only tally of the tournament.

The game was an exercise in baseball mechanics, with perhaps the most exciting plays being a balk by Marsh in the eighth inning and a close pickoff play at second that failed in the same frame. Reardon simply wouldn't let too much of anything exciting happen, never letting the game get out of whack, and most importantly never letting the most potent Tewksbury bats become a factor. All this good Bosco pitcher's breaking stuff added up to a quick Tewksbury exit and an end to a fine season.

O'Brien (24-56) led the team in basehits, with Marsh (21-61) just behind. Marsh led with three doubles and O'Brien had four triples. O'Brien also led the team with 20 runs batted in, while Marsh had 14 RBIs. Steve also led the club with eight stolen bases. Wallace was next with seven swipes and Dascoli had five.

Marsh and Wallace shared the bulk of the pitching load. Steve compiled a 6-2 mark, fanning 84 and walking 28 in 81 innings. The senior lefty compiled a sparkling 1.87 ERA. Wallace, another senior lefthander, went 5-3 with 47 whiffs and 26 walks in 50 innings of pitching. He finished with a 2.38 ERA.

Two weeks before, the Redmen clinched a state tournament berth with a 3-0 win over Wilmington. Below is the first half of the story that ran in the Town Crier in the May 28, 1980 issue.

"He told me this morning, Dad, my arms feels really terrific today." The statement was prophetic, for Tewksbury High School senior left-hander Steve Marsh went out and pitched perhaps the biggest and base game of his young baseball life in Wilmington Friday afternoon, firing a two-hitter at the Wildcats in a 3-0 win that game the Tewksbury High School baseball team a berth in the Eastern Mass tournament.

Walter Marsh could only see that very first inning that his son Steve (6-2, 18.87) was headed for another overpowering performance in a season that has been filled by them.

Marsh, who is headed for the University of Lowell, no-hit Wilmington until co-captain Gary Hastings' one-out single smash past third baseman Fred Mainey in the sixth inning. The only other Wildcat hit was senior catcher Dave Woods' lead-off single in the bottom of the seventh.

Don O'Brien (.442), Bob Dascoli, Ron Wallace, Andy DeVita and Mainey would provide all of the offense that Marsh would need on this day, as the Redmen scored single runs in the first, third and sixth innings.

It will be the first time a Tewksbury High School baseball team has qualified for the an Eastern Mass tourney since 1973 when pitchers Gary Jenkins and Tom Morin helped coach John Perreault's club to a post-season berth.

"I'm just going to savior this one for a while," offered Bresnahan. "It's been a long two years, but it has been worth it. This team has come on like gangbusters since that first week in the season. It's been sweet."