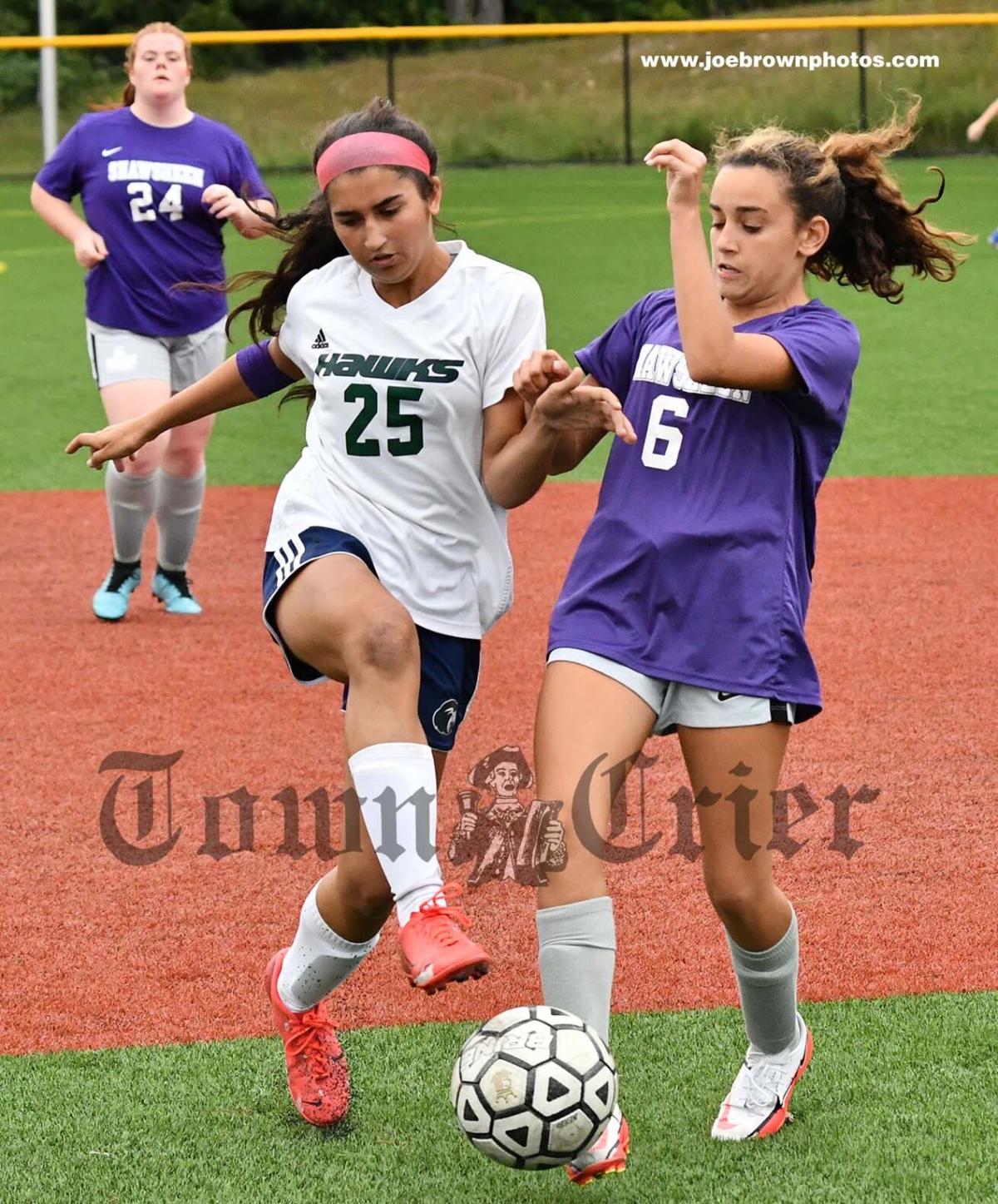 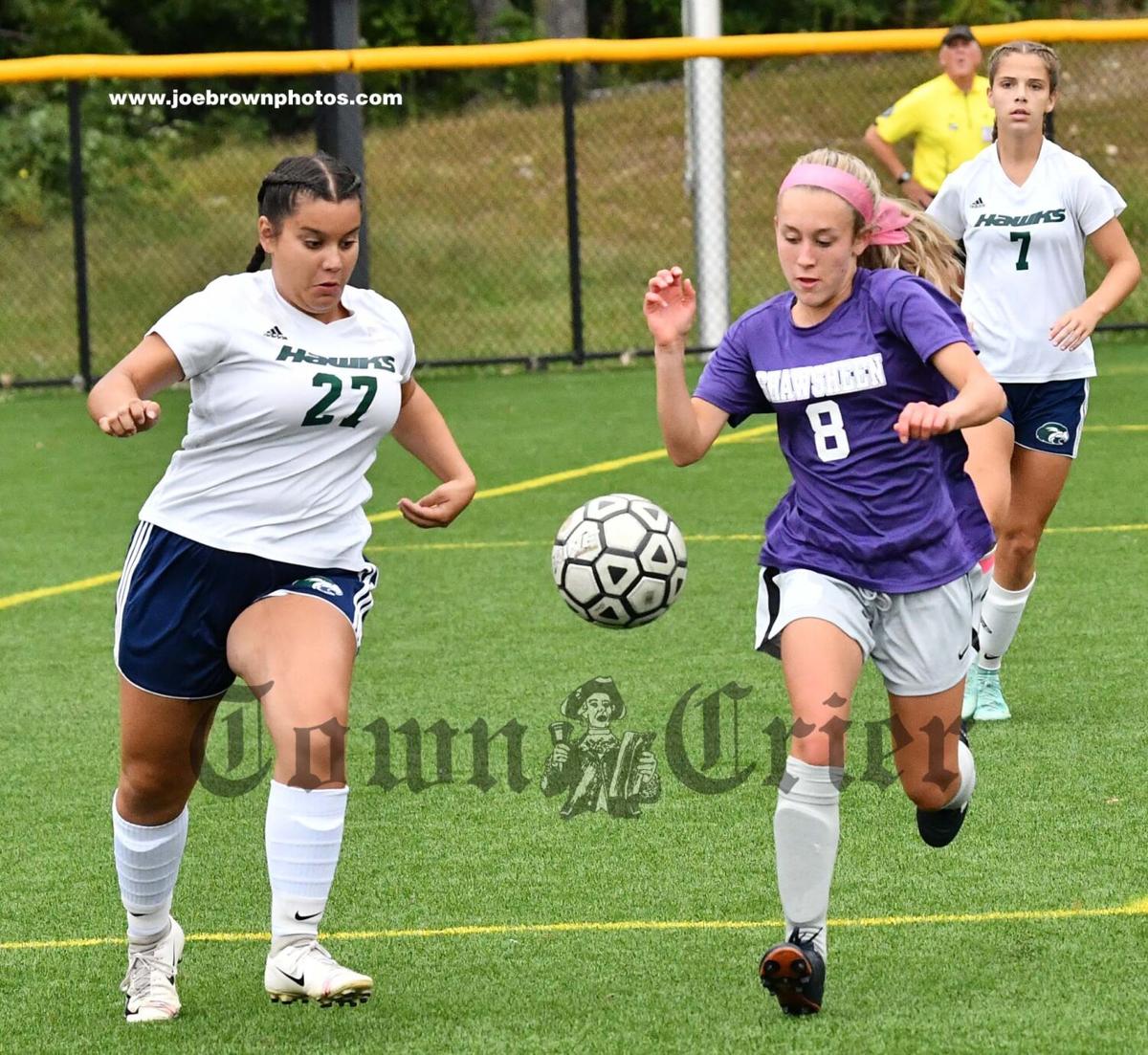 BILLERICA – It has been a bit of a rough start to the season for the Shawsheen Tech Girls Soccer team, as with three more losses this past week they saw their record fall to 0-5 on the young campaign. The Rams started their week with a 4-1 loss to Lowell at home, before following that up with a pair of road losses, first to Northeast by a score of 4-0 last Thursday and then to Mystic Valley on Tuesday by a score of 6-1.

In many ways the slow start is not all that surprising for the Rams, given the number of players they lost off of last year’s team, with 15 seniors including nine starters having graduated, but Rams coach Doug Michaud is hoping that the experience his players are gaining in the early season will pay dividends as the team gets deeper into the season.

“Except for today (Tuesday vs Mystic), we have been in every game up until the last ten minutes,” Michaud said. “We have been down 1-0 or something like that, and then they will score two or three goals late and turn it into a blowout.”

That was certainly the case against Lowell, where the Rams stood tied 1-1 with their MVC opponent with about ten minutes left in the game before Lowell broke the game open with three late goals. Freshman Kendra Minghella of Tewksbury scored the only goal of the game for the Rams, notching it in the first half. It was the first of what Michaud predicts will be many goals for the young future star.

“You will be hearing her name a lot,” Michaud said. “Once she gets going, she is going to score a lot of goals. She is fast and she follows up when other people shoot. This will allow her to score some more goals. Not everybody can do that, so that is great to see.”

Junior midfielder Brielle Pigot scored the only goal of Tuesday’s game against Mystic, with her goal coming after the Rams were already trailing by a score of 6-0.

“We were down 5-0 with about 15 or 20 minutes to go, so I called the girls over and told them to forget about the score. Let’s just go out and focus on scoring a goal. So, we go back out there and Mystic scores right away,” Michaud recalled with a laugh. “I brought them back over and asked if they misunderstood me. I wanted us to score, not them. But then we went back out and Brielle scored a nice goal on an indirect kick from about ten yards beyond the 18’ line”

That would be all the offense for the day for the Rams, who have been struggling to score goals this season, thanks in large part to their struggles with their passing game.

“We definitely struggle to connect with our passes, which makes things difficult for us,” Michaud said. “It’s tough because we only have five or six returning players and only three returning starters. Everyone else is brand new to the team and brand new to varsity soccer.”

Also brand new to the team and varsity soccer is freshman goalie Sydney MacPherson, who has already made some big strides in her development just a few games into the season.

“She has been a work in progress, but she listens and she is learning and getting better all the time,” Michaud said. “It is a lot to learn it all at once, but every time we give her something to work on in a game, she does it. Even though today ended up being a blowout, it was her best game of the season. She made some nice, diving stops and was more aggressive coming out of the net. She is going to keep getting better.”

The Rams will be back in action on Monday when they host CAC rival Greater Lowell at home for a 4:00 pm kickoff.

The Shawsheen Tech Boys Soccer team had come very close in recent games to picking up their win of the season, notching back to back ties last week. But on Tuesday afternoon, the Rams finally broke through for their first victory of the season, pulling out a 3-2 thriller over Mystic Valley at Shawsheen

The Rams prevailed as both teams were looking for their first win of the young season. The Rams took a 1-0 lead thanks to freshman forward Nico Georgoulis, who scored on a nice cross and head ball pass started by fellow freshman Jayden Perez of Tewksbury and then headed by junior Joe Woodward. Mystic Valley tied it up on a goal by Drew Pousseau then claimed the lead on a half field direct kick blast from Andrew Bulic.

Shawsheen, however, was able to gain a tie before halftime on a strike from Woodward, with the assist going to junior Evan Pinto of Wilmington. The Rams broke the deadlock midway through the second half with junior Tyler Francois of Tewksbury getting the game winner, with the assist going to junior Noah Rizzo of Tewksbury who led the attack the entire second half as Shawsheen kept peppering the Mystic goalie until they finally broke through for the game winner.

In their previous game, against Northeast last Thursday, Shawsheen and Northeast played a back and forth game which ended in a 1-1 tie. The Rams took the lead late in the first half on a strike from Woodward, with the assist going to sophomore Josh Haerer of Wilmington. Northeast got the equalizer with 15 minutes to play on a shot from senior Gustavo Teixeria.

Playing well for Shawsheen were senior goalie Tyler Kopacz of Tewksbury, along with juniors Cam Camelio, Ethan Melanson of Tewksbury and Francois.

With two more wins this past week, the Shawsheen Tech Golf team kept their undefeated record intact for the season, improving to 4-0 on the young season as their young roster has been dominant in the early going of the campaign.

With wins over Greater Lawrence by a score of 124-100 last Thursday on the road, followed by a 139-109 win over Essex Tech on Tuesday on their home course at Patriot Golf Course, the Rams once again established themselves as the clear front runners in the CAC as they seek their 17th consecutive league crown.

The Rams began their week with the aforementioned 124-100 win over Greater Lawrence, an impressive victory on the road over a Reggies squad that is vastly improved from recent years. And doing so at a challenging course like Crystal Lake Golf Course made it all the more impressive, especially considering the youth of the Rams squad.

“Greater Lawrence has the best team they have had in years. They have a good coach and they are just going to continue to get better and better.” Shawsheen coach Tom Struthers said. “But our team went there and did a great job. We were the younger team, and we only had a couple of kids who have ever played over there, but we still went out and pulled out a nice win.”

The Rams were led on the day as they have been all season, by sophomore captain Matt Tramonte of Tewksbury. Tramonte has been the low medalist in each of the Rams matches this season, and Thursday was no exception, as he shot a great score of 36 over nine holes to score 34 points for the Rams.

“Matt has just been dynamite all season,” Struthers said. “He is averaging around a 37 or 38 for the season. He shot a two under practice. He is just an amazing gofer and an amazing kid. This year might be a bit of a learning experience for him as far as being a captain, but he will be a great captain for us. He is just a very focused golfer.”

Other top scorers for the Rams included sophomore Sean Schlehuber, who shot a 41 to pick up 27 points, while fellow sophomores Liam Milne and Brendan Lee also played very well with Milne shooting a 42 for 21 points, while Lee shot a 43 for 24 points. Freshman Aidan Fortunado, meanwhile shot a 45 for 18 points.

“The competitiveness of all these boys is phenomenal,” Struthers said. “I am sure they will have some bad days at some point, but they have to understand to just let it go when that happens, because they are going to have a lot more good days.”

In addition to their excellent ability as golfers, the other thing that has helped this Rams team be so successful has been their ability to respond to pressure situations, even at such a young age.

“They are young, but a lot of them play other sports too, so I don’t know if that is it, but they respond well to the pressure,” Struthers said. “They don’t seem to show nerves at that first tee box, which can be hard for a young player. If a kid can do well from there, then you know you have a player. If we can get everyone to have that focus and learn how to use it, we will have a lot of players have great seasons for us.”

In the 139-109 win over Essex on Tuesday Tramonte was once again the low medalist, shooting a 39 for 28 points. Also scoring for the Rams were Tsoukalas with 27 points, Schlehuber with 24 points, Lee with 22 points while Milne and Derek Nazzaro of Tewksbury with 19 points each.

“It has been a rainy season so we have missed out on some matches, so we are trying to squeeze in as many as we can. It will be a busy week, but we are looking forward to it,” Struthers said. “We are very fortunate that Patriot Golf Course has been so great to us with tee times. We just have to keep our focus, because we have a lot of matches in a short time. It is hard to do, but we just have to go out and hope for the best and play well.”

Hi, it's a really amazing article. I love to read articles like this. Well, I am looking for a site where I can find good gaming music, I am searching for it on google, If you know any best site regarding this then please let me know.