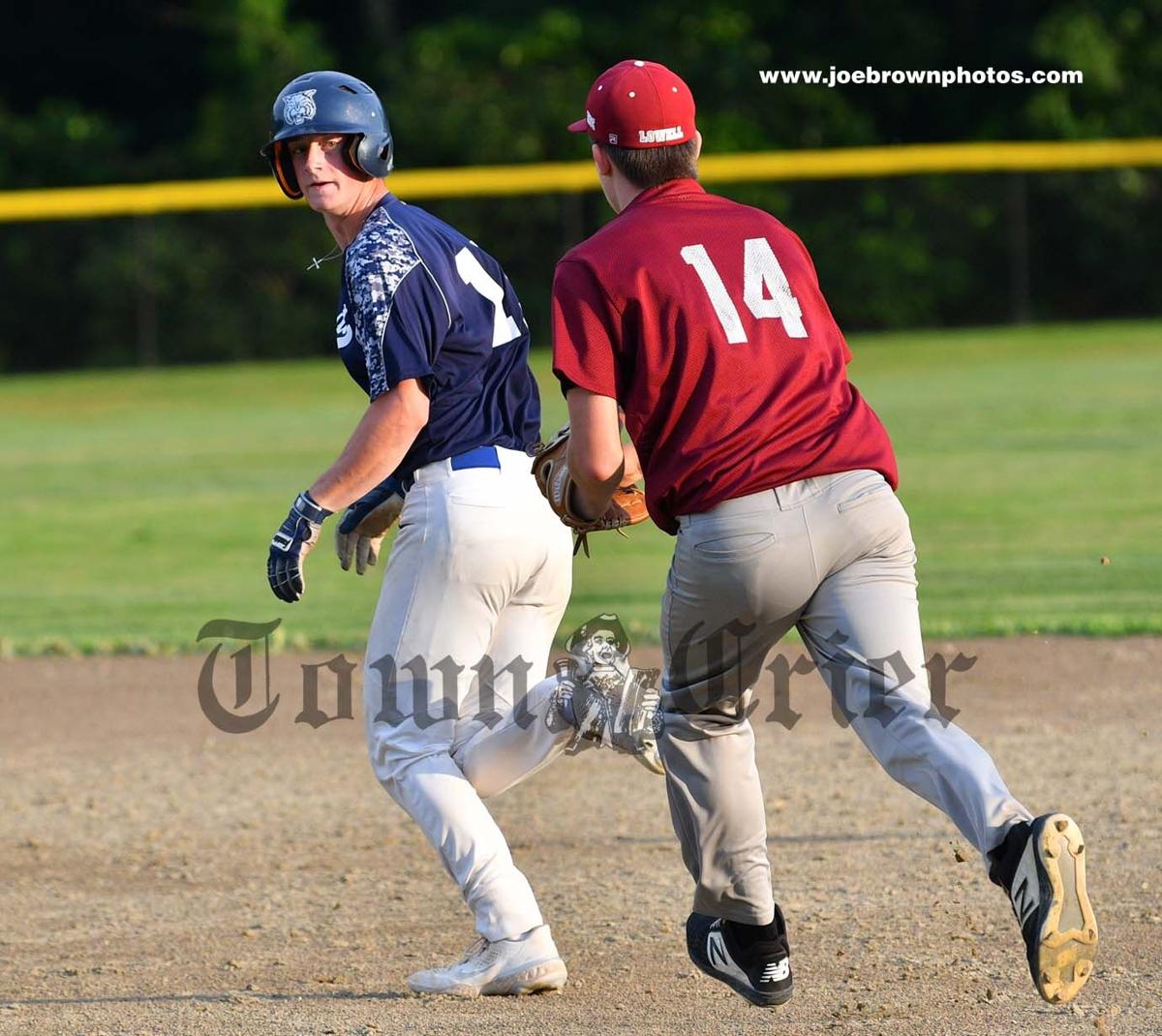 Wilmington’s Matt Vinal is chased by Lowell's Jack Soucy during a late game rundown between first and second   (photo by JoeBrownphotos.com). 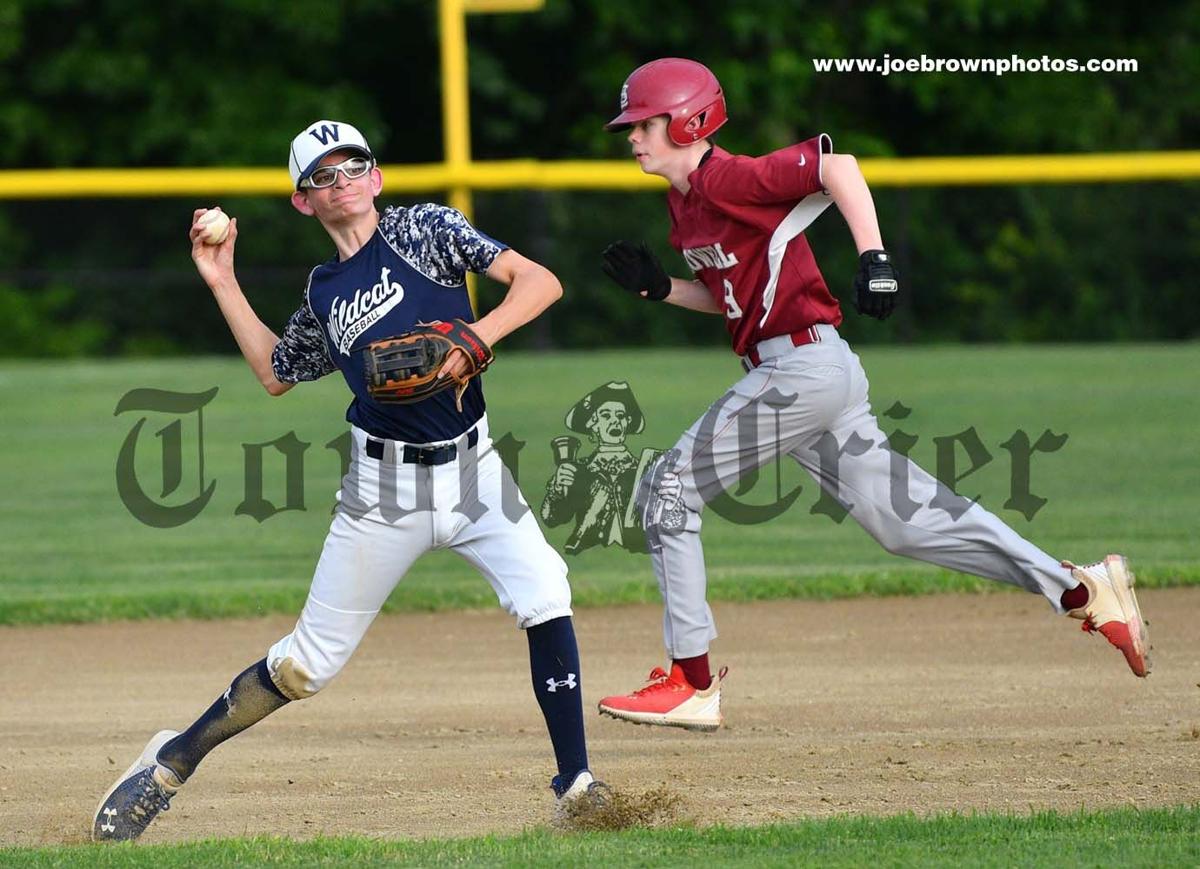 Shortstop Michael Dynan looks to make the out at first base in a Northeast Baseball game played several weeks back. (photo by JoeBrownphotos.com).

Wilmington’s Matt Vinal is chased by Lowell's Jack Soucy during a late game rundown between first and second   (photo by JoeBrownphotos.com).

Shortstop Michael Dynan looks to make the out at first base in a Northeast Baseball game played several weeks back. (photo by JoeBrownphotos.com).

BILLERICA — As the days of summer dwindle and the teams that make up the Northeast Baseball League jockey for final position in the standings, Wilmington looks like the South Division team to beat down the stretch.

Recently, Wilmington could be compared to a stubborn boxer. Each time they were knocked to the mat, they found the means to bounce back and deliver a knockout punch.

Last week, for instance, nemesis North Reading embarrassed the Wildcats in a mercy-shortened 16-1 drubbing. But several days later, Wilmington handed the stunned Hornets a 2-1 defeat to reclaim first place in the league. And in this weekend’s back-to-back event with Billerica, Wilmington suffered a 1-0 shutout loss on Friday only to retaliate on Monday, dispatching the Indians, 9-2. This Wildcats team refuses to lose consecutive games.

“I’ve said it before but in this Northeast League, the makeup of the teams we’re facing could be completely different from one game to another,” said Wilmington first-year coach Connor Zaya, who is currently 8-2-1 with three games in hand. “But I agree. North Reading really beat up on us and our guys were determined to not lose to them again. And same thing today, with Billerica.”

Zaya was referring to the fact that he could only field nine men in the one-run loss to Billerica on Friday but came back with a full compliment of players several days later and rendered substantial offensive damage to claim the lopsided win.

Wilmington’s pitching staff is hitting its stride at the best possible time. Monteforte threw a gem to take down the mighty Hornets and despite the loss, Jack Toomey was stellar in the first meeting with Billerica. But in the rematch with the Indians, Zaya added a new wrinkle that yielded phenomenal results. Taking the mound in his first starting role this summer was Matt Vinal.

“He’s our starting catcher and has a really good arm,” explained the coach. “The coaching staff talked it over and decided to go with him. He has pitched two or three times but only in smaller roles. Today, we asked him to throw strikes and it worked out for us.”

For the most part, the game was a stalemate in the early innings. Vinal and his Billerica counterpart Dan Passerini were each dominant from the mound. And both teams were defensively sound, making plays and stranding baserunners in scoring position. But in the pivotal fifth inning, the Wilmington bats caught fire.

Burke Zimmer worked Passerini for a leadoff walk and was soon followed by six successive hits, leading to six runs. Brett Ebert sent one to left on a line, scoring Zimmer to claim a 1-0 lead. Nolan Joyce, Monteforte, and Jacob Roque continued the hit parade, with Ebert crossing to double the lead. Vinal helped himself with a three-RBI triple, plating all three who preceded him. And Austin Harper delivered Vinal to make it 6-0.

Billerica got a pair back in the bottom of the fifth but allowing the runs only served to further ignite the Wildcats. In the sixth, Noah Spencer scored an insurance run from third on one of the few errors in the contest. And in the seventh, Zimmer drilled one to deep center for a triple, driving in Harper. Zimmer later came home to wrap up the scoring.

Vinal, who allowed only a pair of hits, pitched into the mid-eighties on the count and was relieved by Spencer in the sixth.

Wilmington is currently in first place with 17-points while North Reading is a point back in second. Billerica rounds out the top-three with a distant 13-points. The Hornets game with Dracut was postponed and may be rescheduled but Wilmington, with three left, seems to be in the driver’s seat to claim the South Division title.

Still ahead for the Wildcats is Westford, Lowell, and Woburn (results in after press time). Unfortunately, there will not be a playoff this season due to lingering pandemic restrictions but Zaya and his players seem content with the way this season turned out.

“We are very proud of our performance this summer,” said the coach. “The culture is solid with these guys and there has never been any quit in them which has a gone a long way and has contributed to our success.”