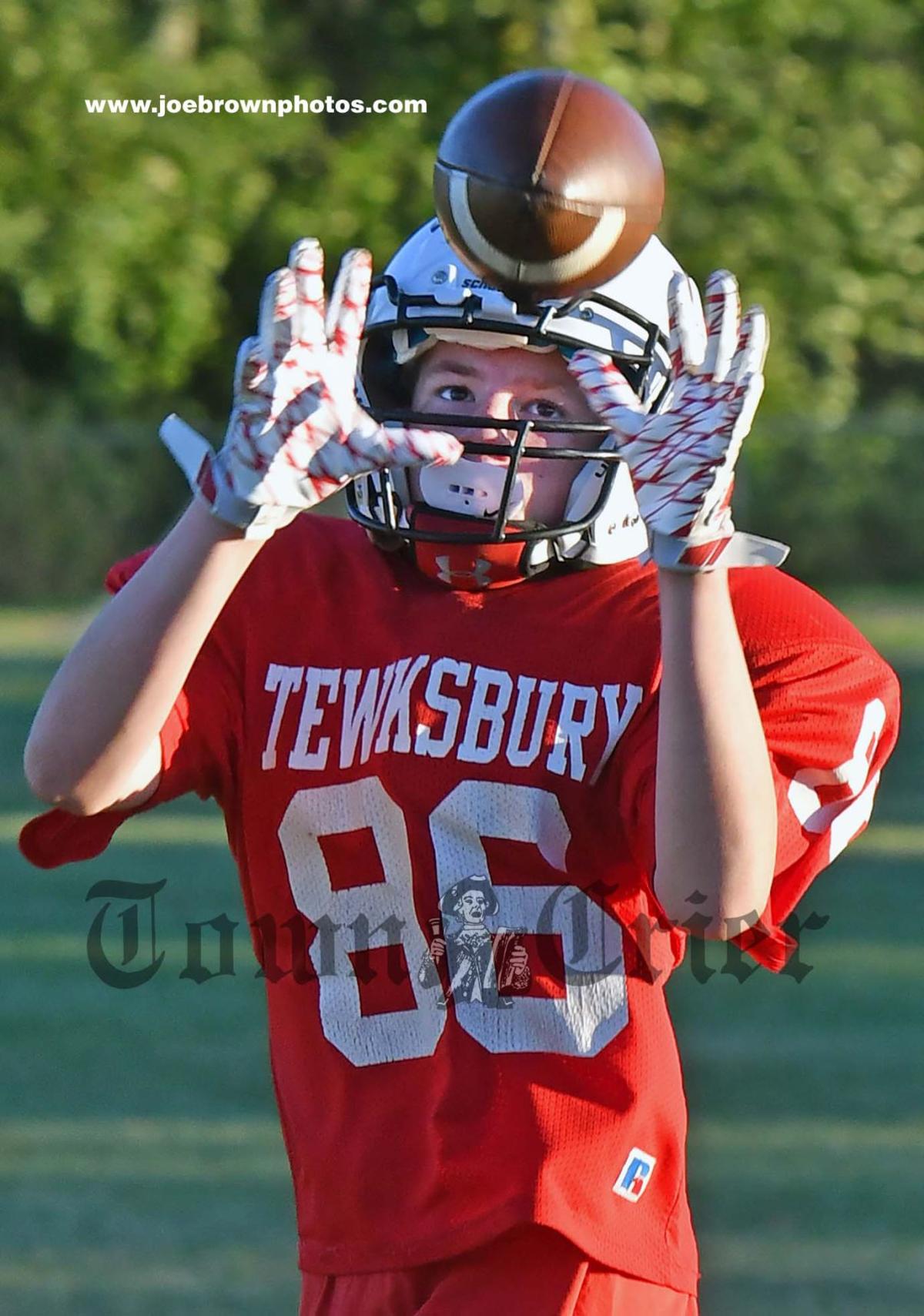 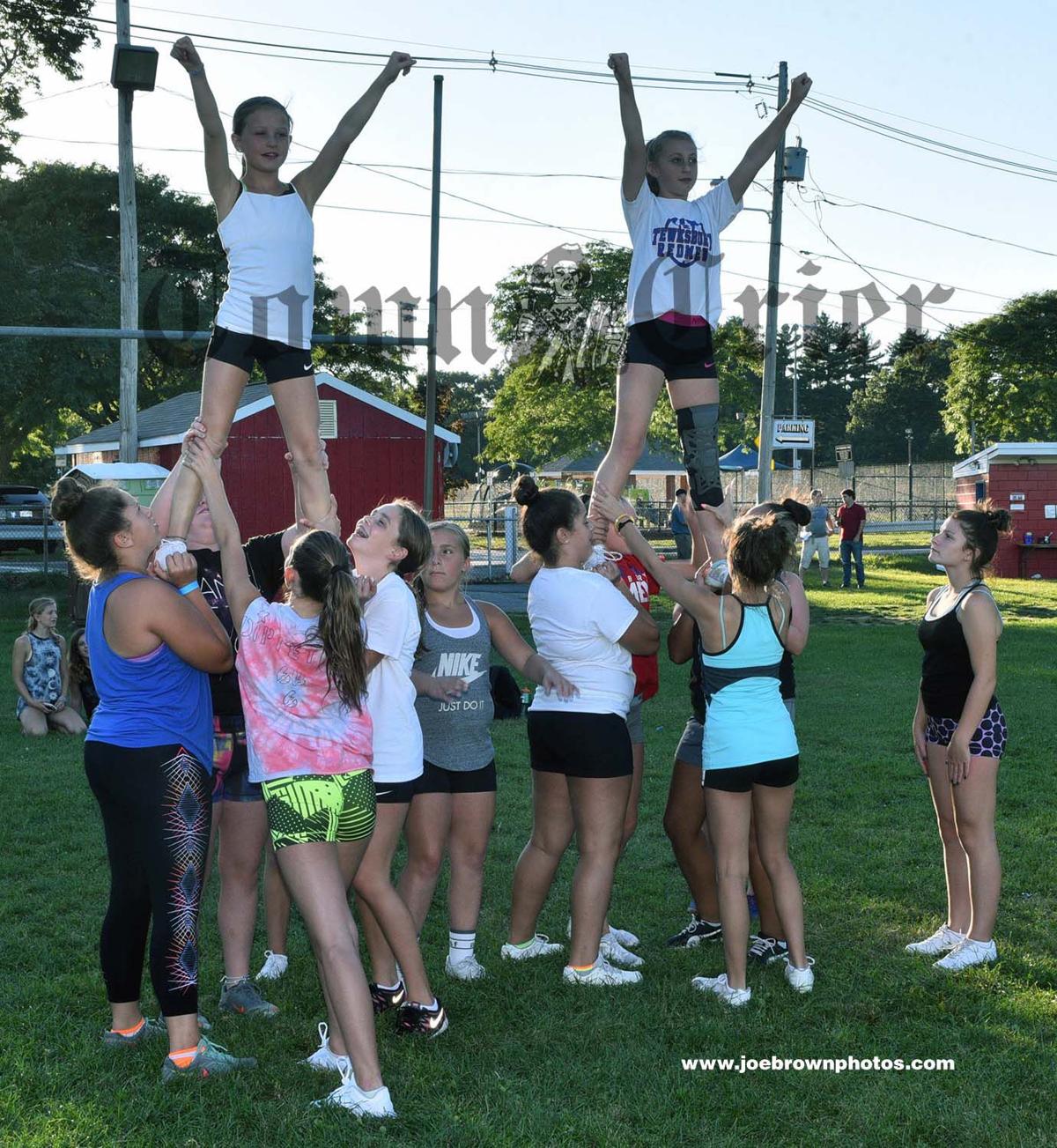 The 7th and 8th grade cheerleaders at the TYF practice their stunting. (Photo by JoeBrownphotos.com)

The 7th and 8th grade cheerleaders at the TYF practice their stunting. (Photo by JoeBrownphotos.com)

TEWKSBURY- The thermometer might now show it, but fall is rapidly approaching and so of course the Livingston Street complex is once again abuzz with the Tewksbury Youth Football Program. Dozens of football players and cheerleaders of a wide range of ages headed down to the fields to brush off the summer rust and get ready for an exciting season.

“A lot of kids sit home nowadays and play their Xbox,” league president Rob Rosa laughed. “We see a lot of conditioning issues [in our first days]. The first few days are about making sure the kids are prepared, and also that they’re having some fun.”

Like many football programs, TYF is working to combat the public perception of football being an unsafe sport. Rosa points to the spike in participants in flag football, which now numbers over 200 players for the upcoming season, as indication that the interest in the game is still very present.

“I think parents are just waiting for their kids to be ready to play football,” Rosa said. “And it’s just parents being conscious [of head injuries]. I totally understand it.”

The safety of all players, whether they be football players or cheerleaders, is paramount to Rosa and the many volunteers that keep the league humming week after week.

“We’ve been leveraging Heads Up Football,” Rosa said. “It’s a program about the proper technique of how to tackle, where to tackle, which way to tackle. We’re also going to have a trainer come out this year and talk to all the coaches about the early signs of concussions.”

Rosa acknowledges that children in this day and age have an unparalleled number of options for how to spend their days, and so he and the rest of the TYF are always looking for ways to keep giving their players new chances to grow, compete, and learn.

This year, the cheerleading program is leaping into the American Youth Cheerleading league, which will allow Tewksbury’s finest young cheerleaders the chance to compete against other towns and regions, potentially even going to a national stage.

“We’re affiliating ourselves with American Youth Cheerleading,” Rosa said. “So the girls will actually go to compete in AYC. They potentially could go to the Nationals. It’s a little more formalized then the league that we’re in, so this gives them an avenue to go and compete and do it at a recreational level.”

And football is expanding as well. The Northeast Junior High Football league is in the process of merging with the New Hampshire Seacoast League, which will allow Tewksbury the chance to play against many new opponents.

Rosa recalls numerous cases of coaches for the younger teams complaining that, while they loved the experience of coaching, it did start to get old playing the same sets of teams over and over again throughout a season.

“We’ll now have 20 teams at the seventh and eighth grade level,” Rosa said. “At the sixth grade level we’ll have 14 teams. That’s a good amount of teams to do cross-play.”

It is Rosa’s hope that this expansion will not only allow for even stronger gameplay and competition, but maybe even help expand the horizons of Tewksbury football players beyond the scope of the town.

“I think a lot of it is the diversity of the town,” Rosa said. “Most of these folks live in Tewksbury and we’re a predominantly white town. There’s nothing wrong with that, but to go and play a Lowell or a Manchester, the diversity is there. It gives the kids a perspective on life. It’s not all like Tewksbury. That’s one of the things I like most, to promote playing more diverse teams.”

“If they’re not having fun, they’re not going to want to play next year,” Rosa said. “They’re going to say I want to do something else. We want to make sure they are staying invested and seeing the progression.”