Back in the 2015 season, Tewksbury resident Lauren Barletta gets some distance underwater at the start of the 100 backstroke for the Shawsheen Tech Girls Swim team. (file photo/Joe Brownphotos.com). 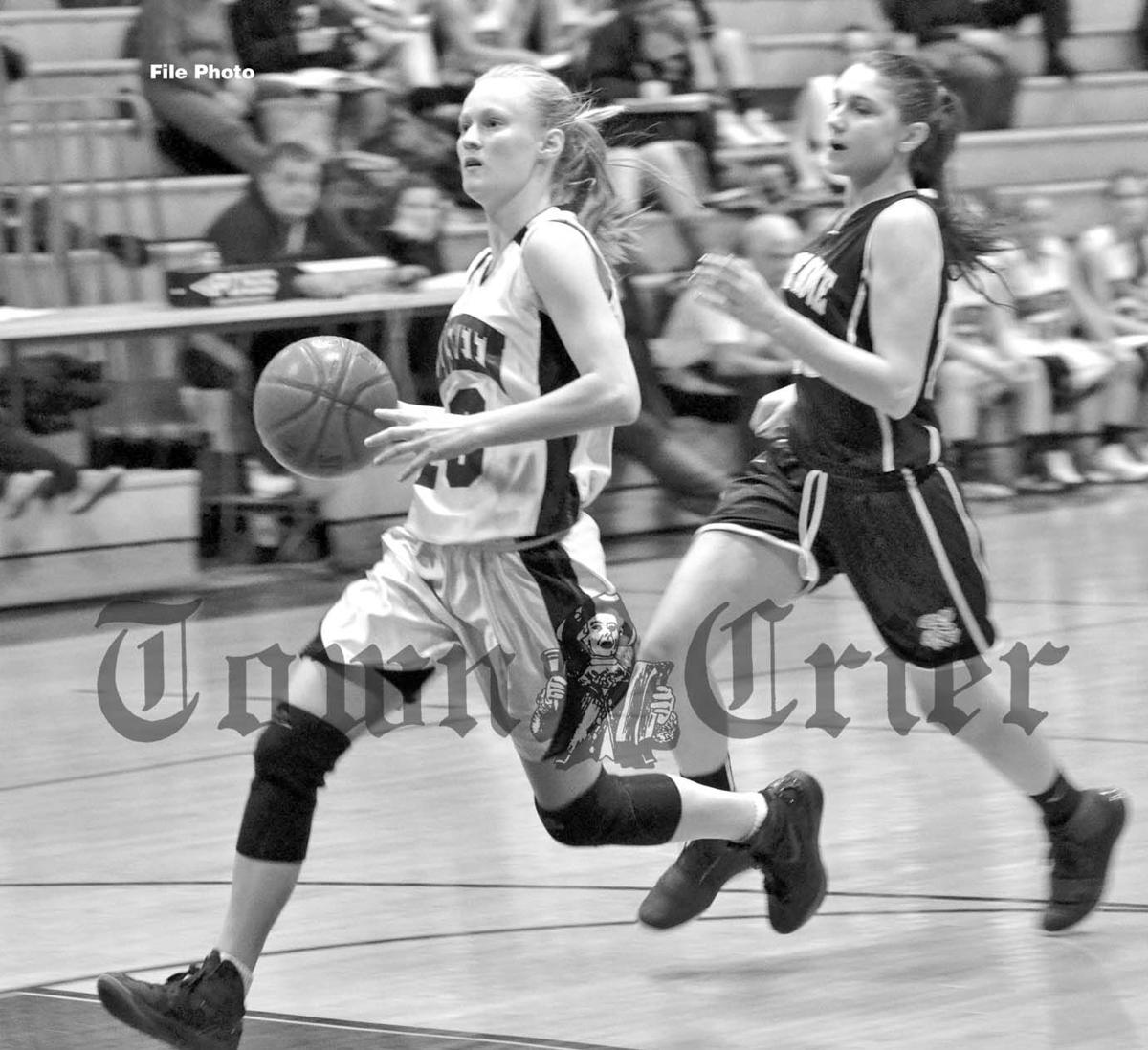 Stephanie Champoux of Wilmington, shown here driving to the basket during the 2013 season, has been selected as one of the top local players of the decade at Shawsheen Tech. (file photo). 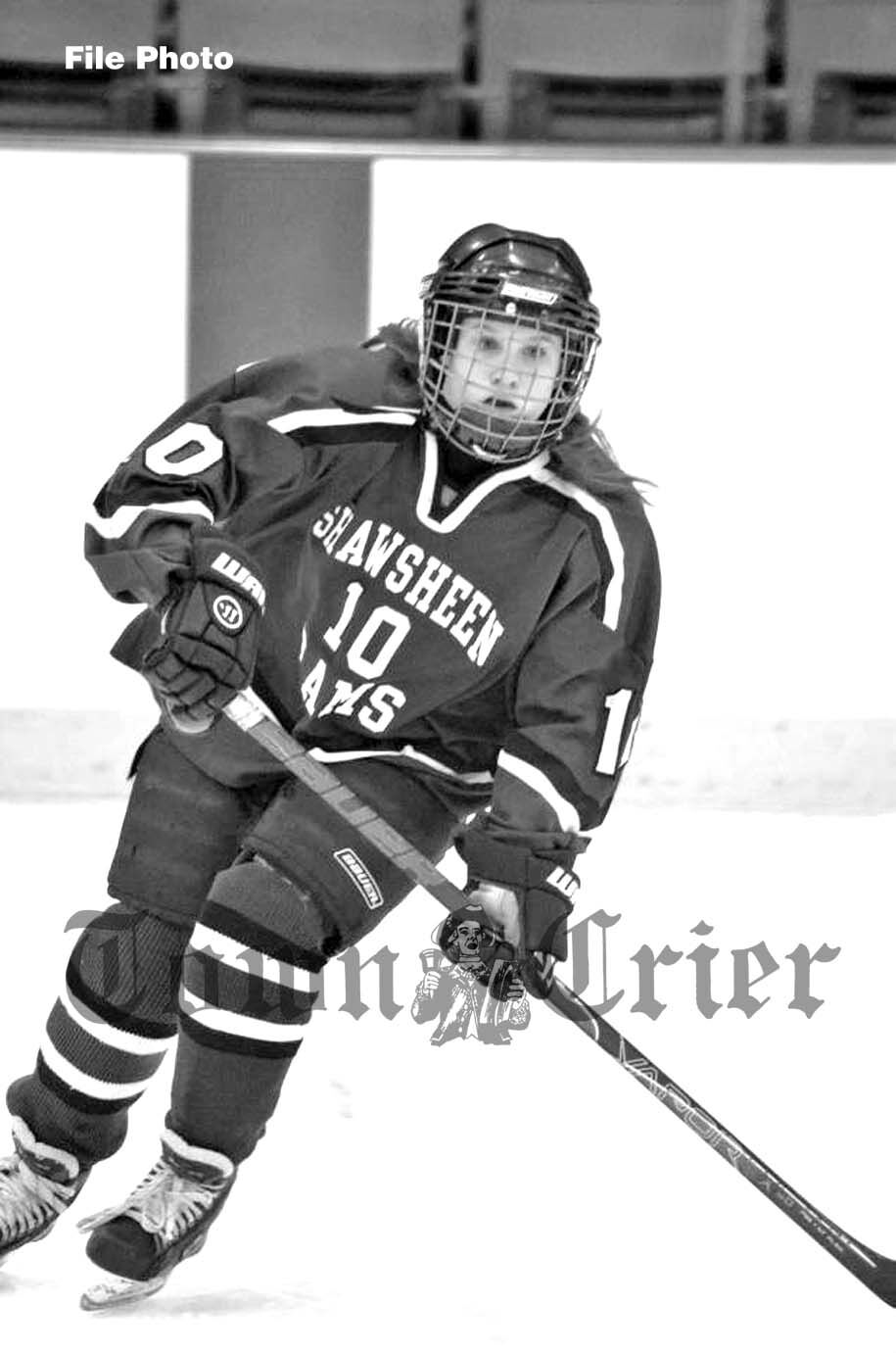 Wilmington native Kennedy Harper was a strong multi-sport athlete at Shawsheen Tech, including as a member of the Girls’ Ice Hockey team. (file photo).

Back in the 2015 season, Tewksbury resident Lauren Barletta gets some distance underwater at the start of the 100 backstroke for the Shawsheen Tech Girls Swim team. (file photo/Joe Brownphotos.com).

Stephanie Champoux of Wilmington, shown here driving to the basket during the 2013 season, has been selected as one of the top local players of the decade at Shawsheen Tech. (file photo).

Wilmington native Kennedy Harper was a strong multi-sport athlete at Shawsheen Tech, including as a member of the Girls’ Ice Hockey team. (file photo).

Part Two of a six-part series of the Town Crier’s Top local female athletes on the Shawsheen Tech winter sports teams through the past decade.

BILLERICA – The Girls Winter sports programs at Shawsheen have made quite a bit of history over the past decade, with multiple league and vocational championships, to go along with many outstanding individual efforts throughout all of the teams.

Between the three Girls programs (Basketball, Hockey and Swimming), the Rams have brought home a pair of Commonwealth Athletic Conference (CAC) titles, to go along with ten State Vocational titles.

The Girls Basketball program won a pair of titles in 2011 and 2012, while the Swim team dominated the decade, winning the State Vocational title all ten years.

Through all of these championships, tournament berths and other fine accomplishments for these teams through the years, there have obviously many fines athletes who have led the way, and many of those have come from Tewksbury and Wilmington.

All selections below have been made solely by this reporter after covering each of these teams for the past ten years. As with any All-Star team, there were some tough omissions, and of course, we limited our selections to Wilmington and Tewksbury residents, meaning that many talented athletes from Billerica, Burlington and Bedford were not considered.

With that being said, I feel like each athlete represented here is very well deserving of their selection.

They may not get as much publicity as some of the higher profile sports, but no team has been more dominant at Shawsheen over the past decade than the Rams Girls Swim team. Just how dominant were the Rams? Well, how about winning the State Vocational title every year of the decade?

That was the story of the decade for the Rams, who took home the state title every year, breaking numerous records along the way, with several Wilmington and Tewksbury athletes helping to lead the charge.

Lauren Barletta (Tewksbury) – Barletta was part of a sensational group of record breaking relay swimmers during her time at Shawsheen. The 2016 graduate helped the Rams to a pair of relay records in both the 200 freestyle relay (1:48.21) and the 400 freestyle relay (4:11.91).

Arianna Brangiforte (Tewksbury) – Brangiforte had success in several events for the Rams, but specialized in the 500 freestyle, with her biggest highlight coming in her senior year of 2014 when she won the state vocational title in the event.

Molly Fitzpatrick (Tewksbury) – A four-year member of the varsity team, Fitzpatrick did a little bit of everything for the Rams. The 2011 graduate competed in the 400-freestyle relay, but also the 200-individual medley, the 100-butterfly and the 200-medley relay, picking up numerous wins in each of the events throughout her career.

Molly Harrington (Tewksbury) – The 2016 graduate certainly left a lasting impression on the Rams history books, as she currently holds five school records, three of them as an individual and two as a member of relay teams.

Nicole Kopacz (Tewksbury) – Along with being part of both the 200 and 400 freestyle relay teams with Barletta, Harrington and Kendra Swift, Kopacz also had some great success as an individual, winning the 200-individual relay (2:44.35) and the 100-butterfly ((1:14.63) at the 2016 state vocational meet.

Another team that was the model of consistency for the Rams over the past ten seasons, the Girls Basketball team qualified for the state tournament every year of the decade. They were especially successful in the early part of the decade under the direction of Dick Barriss, posting a 58-9 combined record over a three year period from 2011-2013 and winning back to back CAC titles in 2011 and 2012. The Rams advanced to the D4N finals in 2012 and to the semifinals in 2011 and 2013.

Stephanie Champoux, Forward, (Tewksbury) – A four-year starter for the Rams, she helped lead the team to three straight trips to at least the D4N semifinals. She had 12 points in an upset win over New Mission in the quarterfinals in 2013, including two clutch free throws with six seconds left to give the Rams a 56-55 lead. A two-time CAC All-Star, Champoux was a team captain in her senior year of 2013.

Taylor Marshall, Forward, (Tewksbury) – Marshall only qualifies for two seasons for the past decade, but the 2011 graduate was actually a four-year starter for the Rams and helped lead the team to the CAC title and a trip to the sectional semifinals in her senior year.

A team captain that season, she had a great all around game with eight points, five rebounds and three steals in a quarterfinal win over North Shore.

Rebecca Smith, Forward, (Tewksbury) – The 2019 graduate was a three-year starter for the Rams, and led the team to three straight tournament berths, including a first round win over Latin Academy in her junior year. Smith, who also starred for the Rams Soccer team, made an impressive debut with the team scoring a game high 15 points in a win over Chelsea in her sophomore year.

Shannell Nardone, Guard, (Wilmington) – A stellar point guard for the Rams, Nardone had the unenviable task of taking over for two-time CAC MVP Kimberly Barriss in 2013, and the team didn’t miss a beat, going 18-3 and advancing to the D4N semifinals. She was a team captain in her senior year of 2014.

Arianna Medeiros (Tewksbury) – An outstanding three-sport athlete for the Rams, Medeiros went on to play softball and soccer at Dean College, but she was pretty good on the basketball court as well. A four-year starter for the Rams, she led the team to back to back CAC titles in 2011 and 2012.

She had a tremendous playoff in 2013, scoring 17 points in an upset win over New Mission in the quarterfinals and scoring a team high 15 points in the final game of her career in a loss to Fenway in the semifinals.

The Shawsheen Girls Hockey team had a tough decade in terms of wins and losses, as the Rams struggled to a 34-143-10 record over the ten year stretch. It was certainly not for lack of effort on the part of the Rams players or coaches, but it was more a lack of more experienced players trying to compete against more skilled and established programs.

Kennedy Harper, Forward, (Wilmington) – She led the team in scoring in her senior year of 2014 with 27-21-48 totals, helping to lead the Rams to their first tournament bid in school history. Once in the tournament she continued her fine play with two goals in the preliminary round win over Scituate.

Harper finished her career with 115 points, making her the all time leading scorer in program history.

Rachel McLaren, Forward, (Wilmington) – Another key member of the 2014 tournament team, McLaren was second on the team in scoring with 15-10-25 totals. A three-sport star at Shawsheen, who also excelled in soccer and lacrosse, she tallied 15 points for the Rams as a junior.

Julia Ryan, Wilmington – If there is competition with Harper for the Rams greatest player of the decade, it would have to be Ryan. A three-year captain for the Rams, Ryan finished her career with 97 points, including 17 goals and seven assists in her senior season.

Emily Sartori, Forward (Wilmington) – Sartori still has one year left in her career with the Rams, but the Class of ’21 star has already made an impact on the program as a three-year varsity player (so far) and a two-year captain.

Alyssa Post, Defense, (Tewksbury) – Post was an integral part of the 2014 tournament team, when as a senior she wrapped up a brilliant career by being selected to the CAC All-Star team. A four-year varsity player for the Rams, Post was a Lowell Sun Second team All-Star as just a sophomore.

Erin Mader, Defense, (Tewksbury) – Shawsheen’s teams may struggled during Mader’s time with the Rams, but Mader was outstanding throughout her career as a four-year varsity player, helping to anchor a defense that was constantly under siege.

Mader started her career as a forward in her freshman year, but moved to defense as a sophomore.

Coming over the next two weeks will be the spring season, male and female teams.