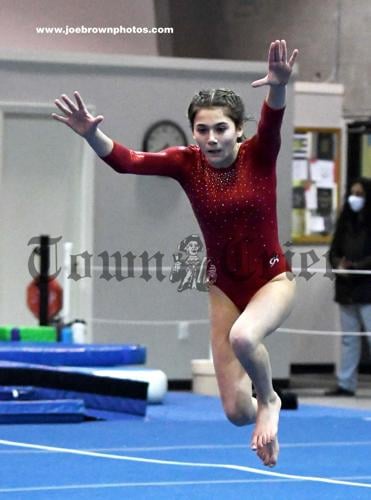 Kayla Saunders had a big night at last Thursday’s TMHS Gymnastics meet, scoring an 8.7 on this floor exercise routine and then scoring an 8.4 on the vault. (photo by JoeBrownphotos.com).

Tewksbury’s Kiera Gaffney scored a 6.0 on the balance beam during last Thursday’s home meet against B/C/T held at Wilkey’s Gym. (photo by JoeBrownphotos.com).

Kayla Saunders had a big night at last Thursday’s TMHS Gymnastics meet, scoring an 8.7 on this floor exercise routine and then scoring an 8.4 on the vault. (photo by JoeBrownphotos.com).

Tewksbury’s Kiera Gaffney scored a 6.0 on the balance beam during last Thursday’s home meet against B/C/T held at Wilkey’s Gym. (photo by JoeBrownphotos.com).

BILLERICA – It's been a trying season for the Tewksbury Memorial High School Gymnastics team for sure. The Redmen have battled injuries and illnesses up and down the line-up, have yet to compete with a full, healthy roster, and when they do get on the mat, they have performed very well, but in terms of wins and losses, they are 2-3, with two of the losses coming back a combined 1.5 points.

The one point loss came last Thursday against one of the more powerful and traditionally strong Billerica/Chelmsford/Tyngsboro co-op program, as the Redmen fell 129.4-128.4 to fall to 2-3 on the season. This Friday, Tewksbury will host Dracut and Haverhill in the last dual meets of the season with the hopes of surpassing the .500 mark before the season ends on February 3rd with the league championship meet.

“We finally got a lot of the kids back competing. We did have a lot of kids who had to quarantine after getting COVID – it has pretty much circulated throughout the entire team,” said head coach Jessica Wilkey. “We're looking forward to finally having our full roster, completely healthy for our next meet. When those kids were out with COVID, it affected their lungs and now it's been slow getting them back to compete on certain events and it was difficult for them to breathe. Their health is much more important than us winning a meet. They have been down for some time so for them just to hop back into the gym is very hard to do because they haven't physically worked out and their bodies are not physically strong enough for them (at that point). It has affected them all differently, but it's been a tough-go for us. Hopefully we are past the point of all of that.”

Tewksbury's all-around competitors in this meet were Amanda Ogden and Maddie Carroll. Ogden finished with a 9.3 on the floor exercise, a 9.2 on the bars, an 8.9 on the vault and a 7.3 on the balance beam for her 34.7 combined score.

“Amanda's scores speak for themselves,” said Wilkey. “She is the backbone of this team.”

“This was her first time doing the all-around competition. She's a Club Gymnast here at Wilkey's and is in the eighth grade. She had a bummed ankle, yet she still pushed through to help the team,” said Wilkey.

Senior captain Bella Schille competed in three events and came away with outstanding scores in two of them. She had a 9.4 on the floor and an 8.7 on the beam. She did compete on the bars and fell three times.

“She had a major injury at the start of the season so she missed some the first couple of meets. That injury was just so disappointing for her because she's a senior, who is trying to qualify as an individual for the state meet,” said Wilkey. “She is still recovering so in her best interest, we held her our of vault. She did the bars and at that last meet she fell three times, but she got up each time smiling. She's such a great leader, such a positive role model and she's a great gymnast.”

“She is just very consistent. She's absolutely beautiful to watch. She's an Excel Gymnast at Legends in North Andover and she's just awesome, such a great kid. She's very consistent and she's a strong athlete. I'm not sure where she's going to go to high school next year, but I'm grateful to have her this season,” said Wilkey.

Another eighth grader, Kayla Saunders was very impressive on the floor exercise scoring an 8.7 and then on the vault with an 8.4. She did both events despite an ongoing injury.

“She is going to be a gymnast to watch in the upcoming years. That family bleeds Tewksbury. Kayla is a phenomenal gymnast, she competes here at Wilkey's (in the off-season), but the last two meets she has competed with a broken hand/finger and she still has been able to compete on the vault and the floor (exercise), all on one hand,” said Wilkey. “It was just so phenomenal to see. She's also a strong contributor for us on the bars and beam and there was one meet that we had her in the all-around competition and she did phenomenal. She's just an eighth grade so she will definitely be one to watch over the next few years.”

Rounding out the competitors included Jocelyn Delorey, who had a 7.8 on the vault, Jaden Kasule saw her first action of the season recovering from an injury and she posted a 7.0 on the bars, then Abigail McCarthy and Keira Gaffney finished with respective scores of 6.1 and 6.0 on the beam, and Julia Carlson earned a 7.1 on the floor exercise.

“It was a very close meet and we lost by one point to a very good team. I will say that when the MVC Championship Meet comes on February 3rd, I feel strongly, that if we are completely healthy, we will do very well and actually beat some teams that have already beaten us this season. We lost here to C/B/T by a point and earlier this season we lost to Andover by a tenth of a point. And not saying that there's other teams aren't facing the same adversities that we have been dealing with, but we have not once this season put up an entire line-up of our best athletes on all of the events. It just hasn't happened for various reasons.

“Honestly, for myself and the girls, we are just so grateful to be having in-person competition meets. We are excited to be able to go gyms and have teams come to us. We are very excited that we are allowed to have spectators. The kids are very respectful of all of the COVID policies with the marks and all of that because they know if the protocols are not followed, that the season could be shut down at any time.”