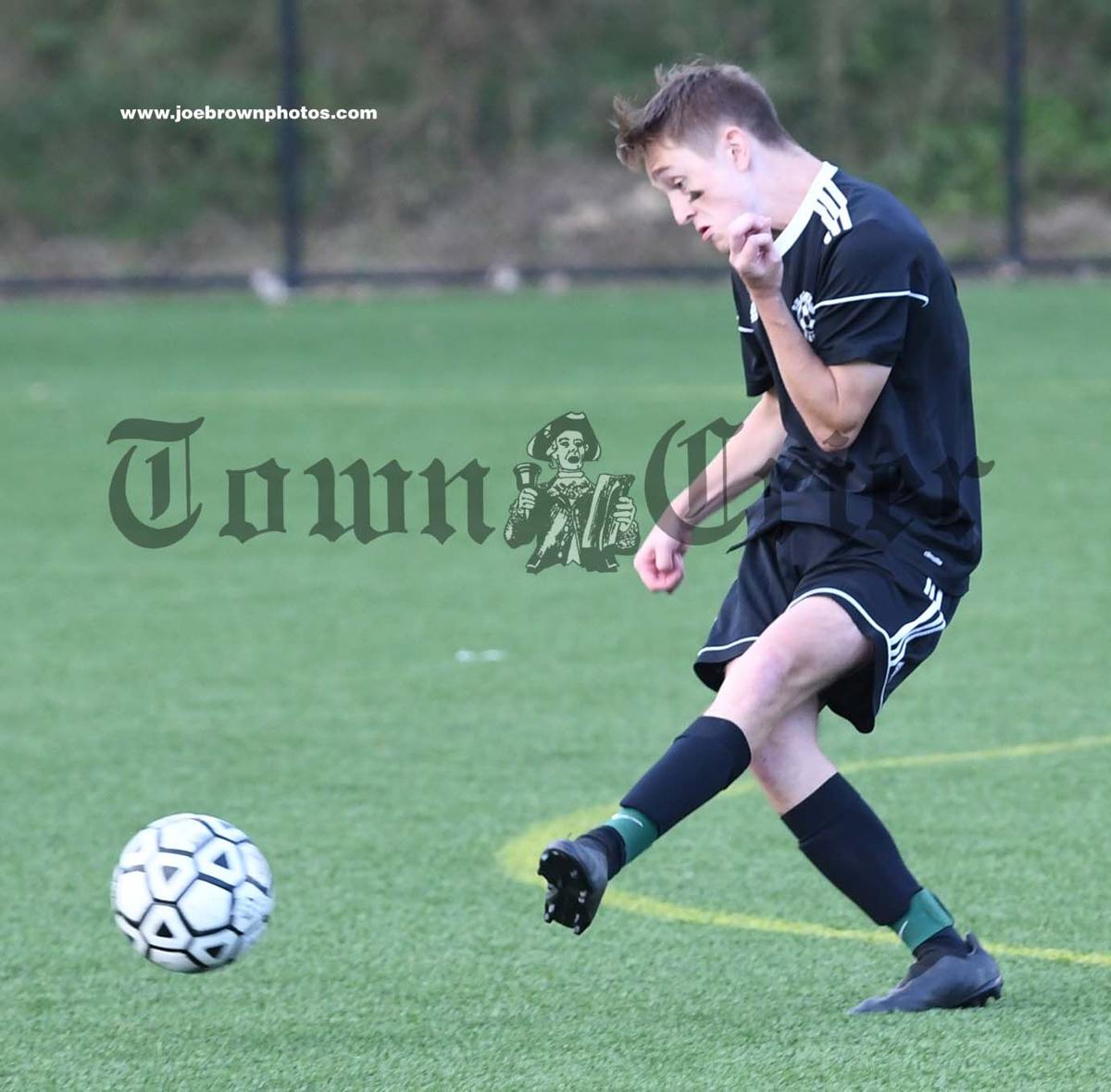 Shawsheen’s Joe Woodward sends a pass over to a teammate during an earlier season Rams’ Boys Soccer game. (photo by JoeBrownphotos.com). 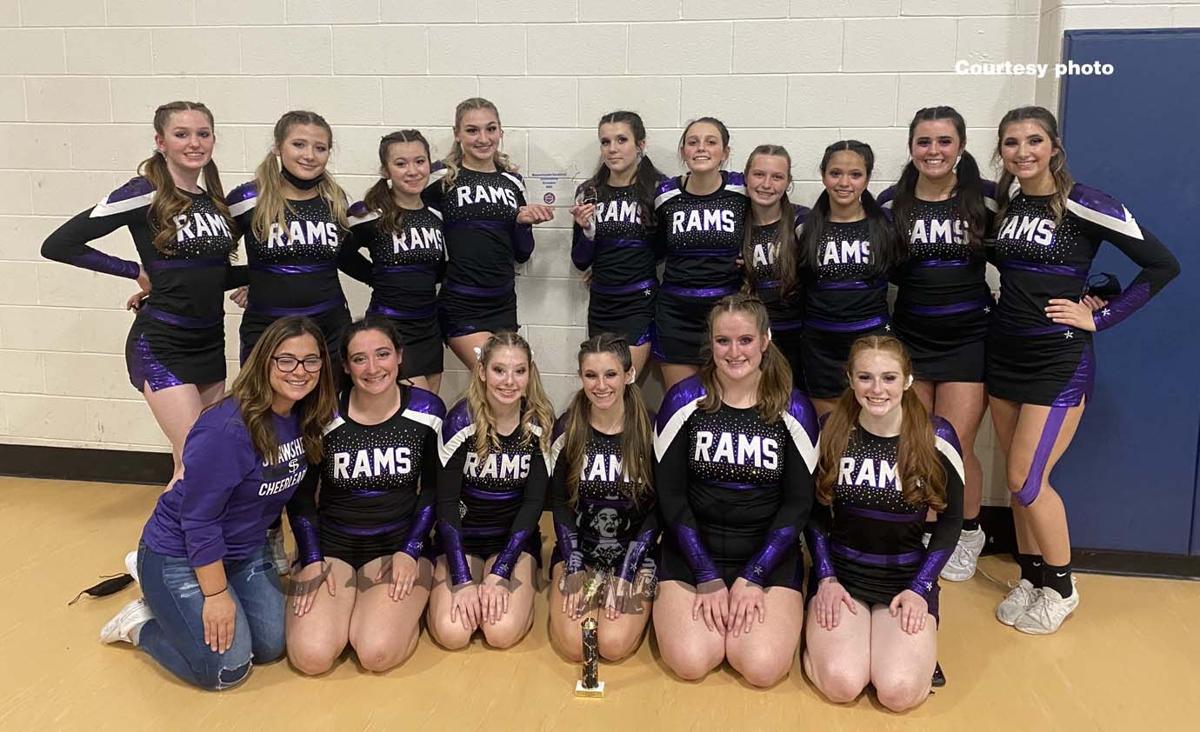 Shawsheen’s Joe Woodward sends a pass over to a teammate during an earlier season Rams’ Boys Soccer game. (photo by JoeBrownphotos.com).

NANTUCKET — Of all the long road trips that teams had to take during this year of the MIAA statewide tournament, the Shawsheen Tech Boys Soccer team may have faced one of the most challenging on Sunday afternoon, as the No. 24 seeded Rams hit the road to travel to Nantucket to take on the No. 9 Whalers

After their long journey to the island the Rams put up quite a battle on a cold and windy day, as they valiantly stayed with a talented Nantucket team that kept the pressure on throughout before finally scoring a late second half goal to eliminate the Rams by a score of 2-1.

With the loss, the Rams saw their fine season come to an end with a record of 8-4-5, while Nantucket improved to 13-4-1 and advanced to the round of 16 where they will take on Wahconah, who defeated Northeast Metro Tech in their first round game.

“We played very well. We went up against a really good team, but we stayed with them,” Shawsheen coach Tom Severo said. “They had four or five really solid players. Their leading scorer would be the leading scorer for just about any team. He was like a man out there. They pressured us a lot, but we hung in there.”

Nantucket began their pressure right from the start with an opportunity in the game’s opening minute when a player broke through for a one on one opportunity against Shawsheen senior goalie Tyler Kopacz of Tewksbury. But Kopacz held strong, denying the threat, beginning a theme that would carry the Rams through much of the first half.

“Tyler had a great game,” Severo said. “He made some great saves and did a great job keeping us in the game.”

Later in the half the Whalers took a 1-0 lead after being denied repeatedly by Kopacz and they took that lead into intermission. But, early in the second half the Rams tied the score when junior Noah Rizzo of Tewksbury brilliantly battled through the right side of the defense then cut across the middle powering through more defenders to get off a blast into the back of the net tying the game at 1-1.

“Noah turned into Diego Maradona on that one,” Severo said. “He went through their entire team to score that goal. It was a great play.”

Shawsheen carried the play to Nantucket for much of the half however the Whalers got the deciding goal with ten minutes to play and earned the right to advance.

While disappointed to see the season come to an end, Severo couldn’t help but be proud of what his team was able to accomplish this season, in a year when the defending CAC champs were basically starting over with an almost entirely new roster from the previous season’s championship squad.

“I am very proud of where this team has come from the beginning of the year to now,” Severo said. “It is amazing how far they have come. As a coach that is what you always hope for. We were like a family heading down to Nantucket on Sunday, which made the experience kind of nice.”

Severo also has high hopes for next season, as the Rams will lose only two players off of this year’s squad. While those two players, goalie Tyler Kopacz and captain Jeremy Perez, will be very tough to replace, Severo is confident in the players the Rams are bring back, including Camelio, Duhamel and Melanson, along with junior captain Evan Pinto of Wilmington, along with fellow juniors Tyler Francois, Tom Robenek and Joe Woodward and freshmen Nico Georgoulis and Jayden Perez of Tewksbury, among several others.

“We have some high hopes for next season,” Severo said. “We are actually still practicing right now and working on some things already for next year. We have a long way to go, but I think we are going to have a very good season.”

What exactly did this squad do that was so impressive? Well, how does this sound? They captured not just one, but two championships to add to their trophy case in a matter of just two days. The Rams began their huge weekend on Saturday with a win at the CAC League Competition held at Essex Tech, taking home the CAC Fall Grand Championship by outdistancing a talented field of ten teams.

“We had not won the CAC league championship in quite a few years, so this was a huge accomplishment for our team,” said Shawsheen head coach Samantha Cacciola.

If that was a huge accomplishment for the Rams, then Sunday even better, as they faced off against the best the state had to offer in the MVADA State Vocational Fall Cheerleading Invitational at Tri-County High School in Franklin. Facing an even larger field of competitors, the Rams were not intimidated, putting together another great performance to win the state vocational championship.

The Rams will now move on to compete in the North Regional Cheerleading Championships at Billerica High School on Sunday at 3:50 pm.

The varsity cheerleading team is made of 15 members, including five seniors, seven juniors, two sophomores, and one freshman.

The Rams are coached by Cacciola and Jillian James.