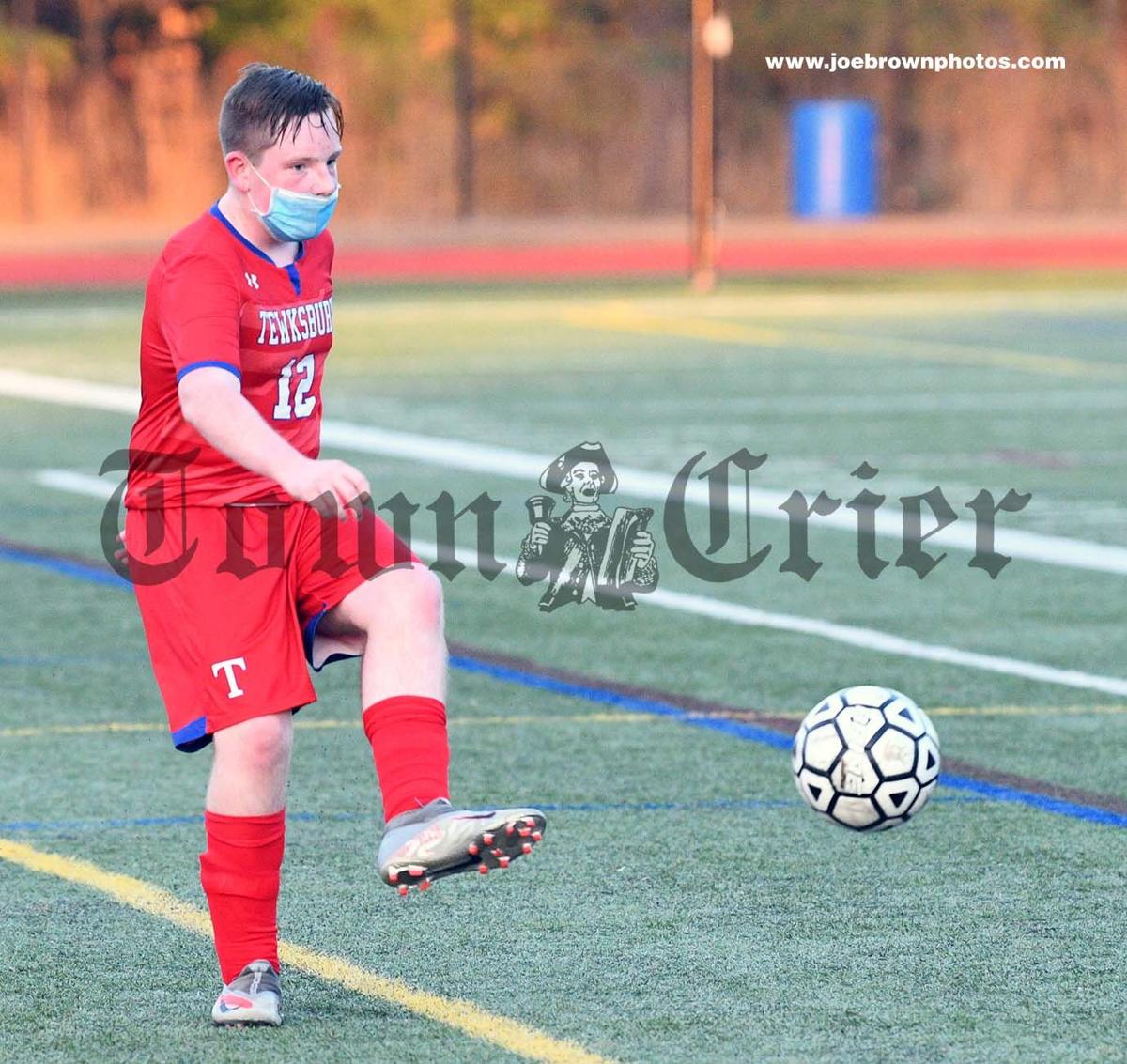 Dylan Crowley works the ball for the TMHS Boys Soccer team during an earlier season home game. (photo by JoeBrownphotos.com). 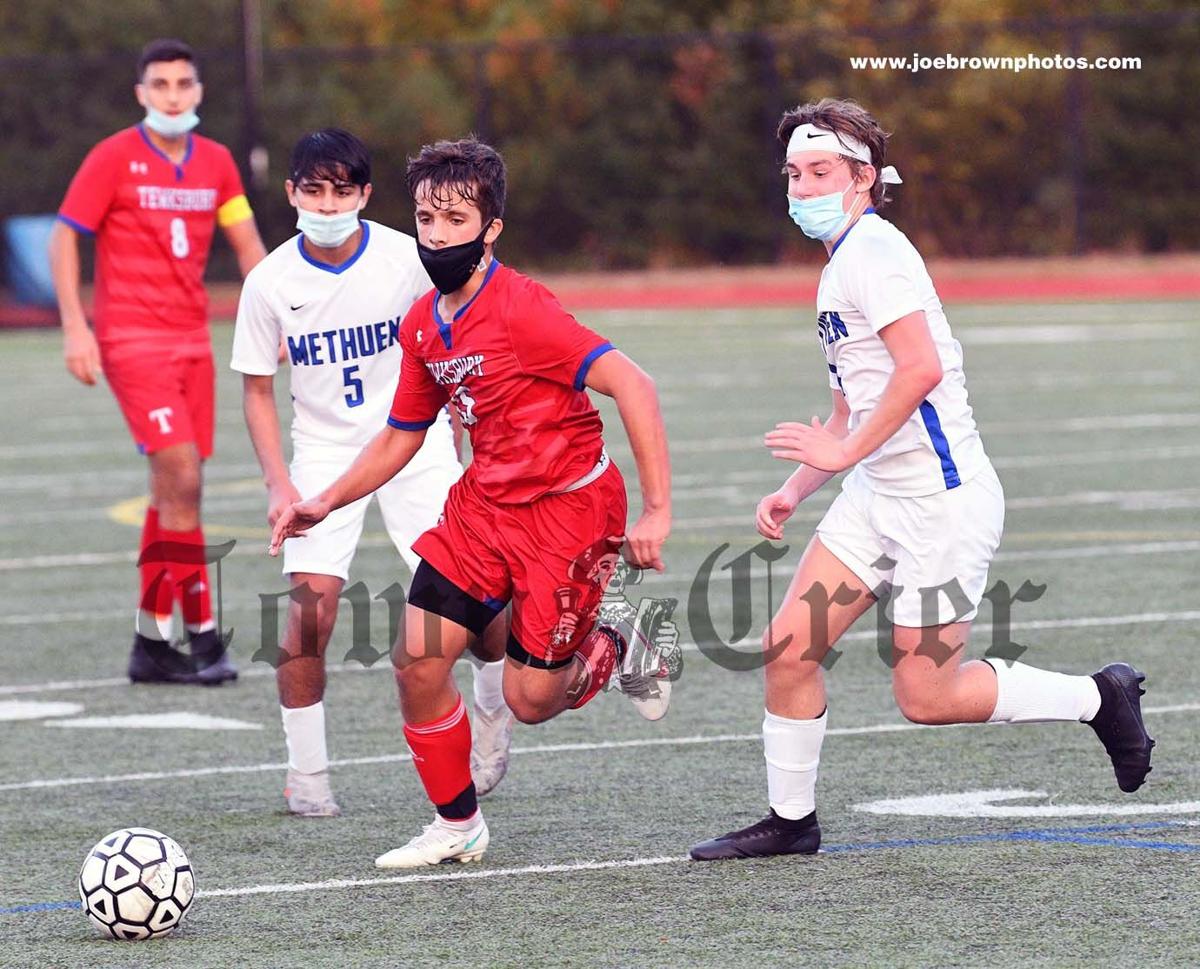 Dylan Crowley works the ball for the TMHS Boys Soccer team during an earlier season home game. (photo by JoeBrownphotos.com).

TEWKSBURY – With everything going on in the world today and for the entire year for that matter, really nothing has gone the way any of us have expected.

Certainly that can be said for the Tewksbury Memorial High School boys' soccer team.

Last Wednesday, the Redmen ended its abbreviated season with the first win of the season, a 4-2 victory over Central Catholic, which came just a few days after blowing a two-goal lead in the fourth quarter to the same team.

Tewksbury was scheduled to play one final game last Saturday against Chelmsford, but it was postponed, therefore the Redmen finished the season with a 1-6-1 record.

“Overall, I think the consensus was, and Brady Eagan said it after the Central Catholic game as we were walking over to talk in the corner of the field, “why couldn't we have played like this every game? I said yes, I'm glad somebody else said it,” said head coach Chris Burns. “We tied Methuen and we actually should have lost that game as they had way more chances than we did and we got lucky. I think we would have beaten Lowell, beaten Dracut at least once. We were also beating Haverhill and Central Catholic, the first time we played them, 3-1 in both games and lost both. I think our record probably should have been more like 4-2-2 or even 5-2-1 or something like that, but it is what it is.”

In the win, senior Rob Manson scored his first varsity goal as the teams headed into the halftime break tied at 1-1. In the first minute of the third quarter, captain Nabil Barkallah gave the Redmen a 2-1 lead. That was followed up by senior captain Patrick Demelo, who converted on a penalty kick to make it 3-1.

“We were up 3-1 in the third quarter and it was eerily familiar,” said Burns. “I actually said that to the guys that we were in the same position, but hopefully this one would be a better outcome.”

And it was. Justin Rooney added the team's fourth goal before Central added a late one to make it a 4-2 game.

That was the end of the season and also the end of the careers for eight seniors including tri-captains Brady Eagan, Patrick Demelo and Nabil Barkallah, as well as James Ministeri, Hugo Melo Dos Santos, Adam Favreau, Robert Manson and Nicholas Johnston.

“Nick played in the program as a freshman and then he didn't play the next two years. He came out for the team this year and played a little bit and he did fine,” said Burns. “Brady and Nabil have been starting since they were sophomores. Patrick really had a great year last year, but this year people knew who he was and last year no one really knew who he was.

“Rob played a little bit last year but a lot this year and he finally scored. Adam played in our first two games and got hurt. He had to have surgery on his hip. Hugo has been playing for us for two years and he's been an important player for us. The same with James. He played defense this year where last year he played forward or in the midfield, but this year I had to have him play defense because we didn't have anyone so he did a real important service for us and probably won't get recognized as much as he should. That was really good for him.”

While the eight seniors will be leaving, Burns expects the program to be more competitive and earn more victories starting next year.

“We had some young kids who got to play a lot and learned a little bit,” he said. “Overall for everybody, it was difficult with the restrictions and then in some of the games it seemed there wasn't any restrictions except for wearing a mask. You could basically do whatever you wanted, depending on who the referees were. That made it hard and there were a lot of inconsistencies for the kids. We had a bunch of young kids, mostly sophomores play a lot, guys like Brady Chapman, Evan Mendonca and Will Eskenas. Those guys basically played a ton of minutes during the season and that's great.

“We had a bunch of juniors like Eric Impink, Dylan Crowley and Travis Cohen, and those guys played a lot, too. Those guys were playing in positions that they really hadn't played before so that was good. Justin Rooney played a lot. Looking forward to next year, we will have a ton of guys returning who played a ton of minutes this year even though we only played eight games.

“In goal, we struggled a little bit but I think that was also a learning process. Ryan Melo put himself a head of Cody LeGrand. I was playing them both throughout the year, each a half and that kind of stopped the last two games. Ryan played the entire game in both games against Central. He still has to figure some stuff out. The two of them were making mistakes, but that's because they hadn't played varsity before so it's easier to make mistakes when you are inexperienced like that.”

Overall there will be 14 players returning next year.

“A few of those seniors are going to be hard to replace, but then we have young players too,” said Burns. “The JV team went 5-2-1 or something like that so they won a lot and had a really good year. We also had one freshman play varsity this year, Ryan Cura and he is excellent, so he'll be around. We also have a good freshmen class, the sophomore class is pretty good and we have a bunch of juniors returning who all had strong seasons. I envision next year there will be four or five sophomores on the varsity along with the whole junior class which is close to ten guys.

“Moving forward, we're probably going to better than we were this year. This year we probably should have been much better than what our record was. The skill level seems to be getting better. We'll be smaller which we have been in the past, but that's OK. Defensively we just need to be better. We gave up four or more goals in half of our games.”

On the season, Tewksbury was outscored 25-11. Cura led the team with five goals and Demelo was behind him with four.