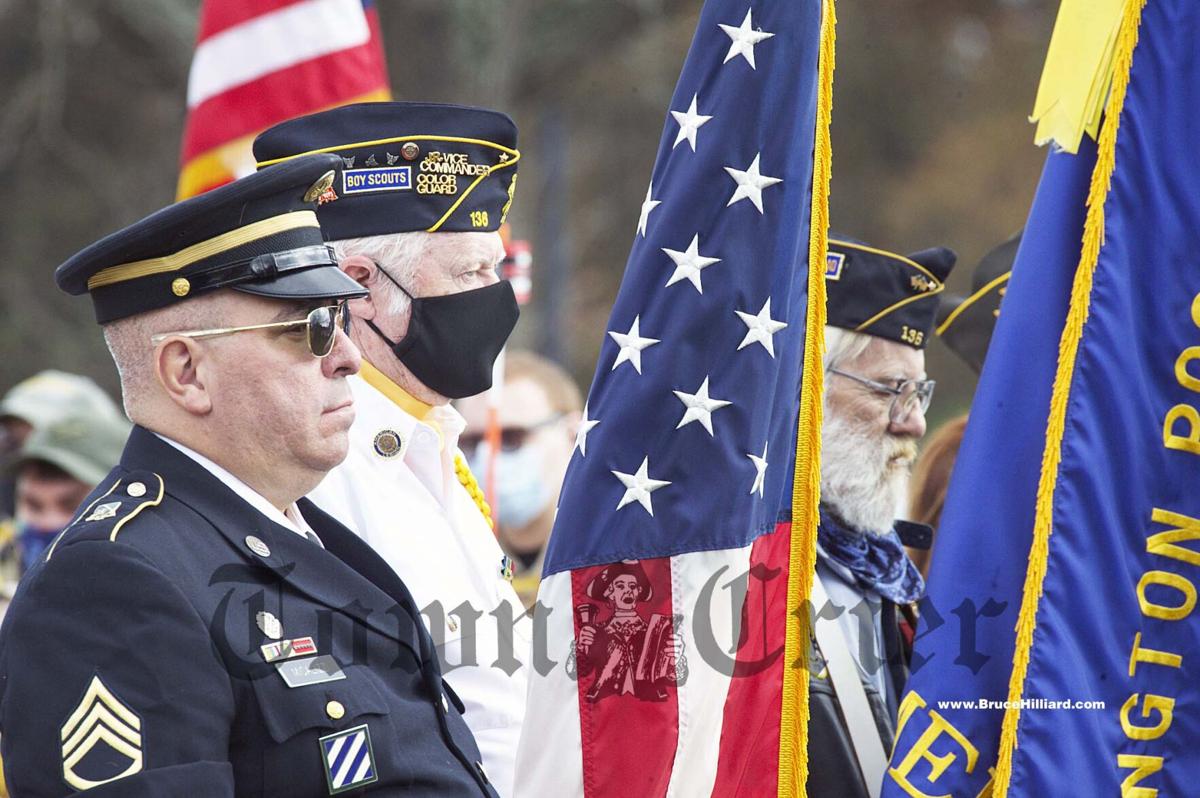 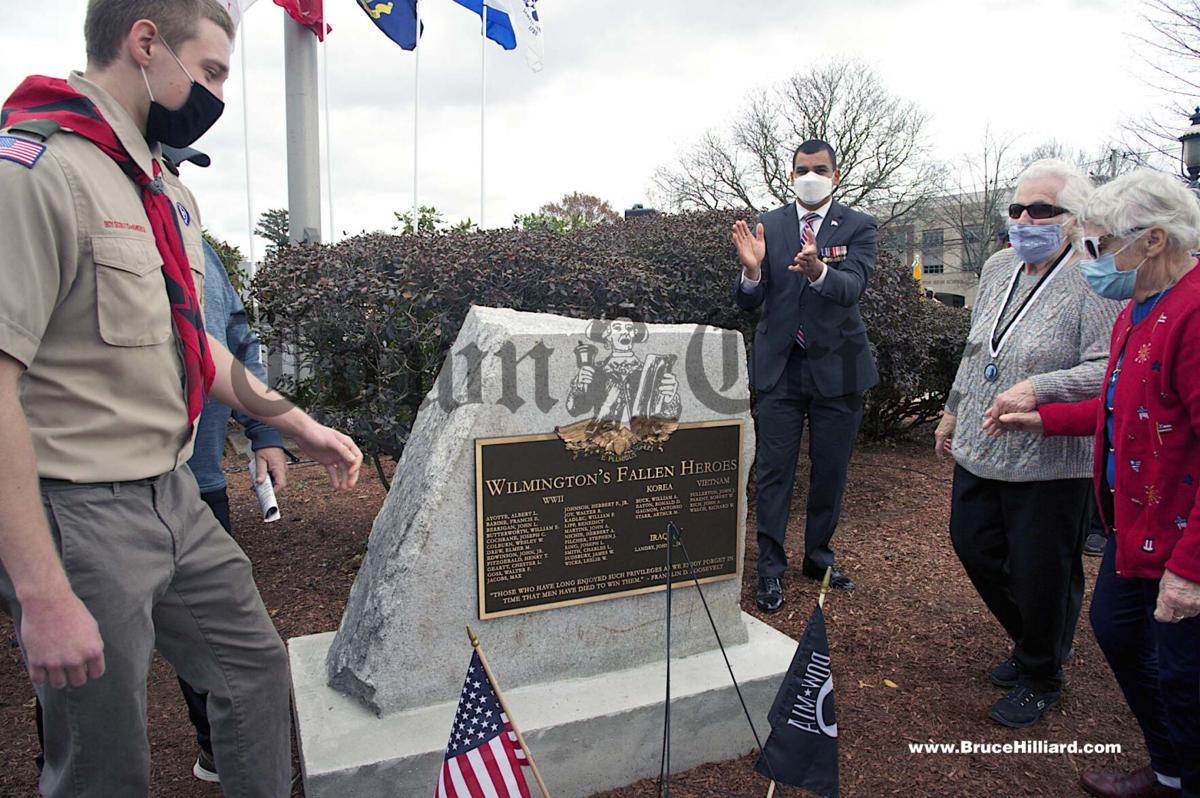 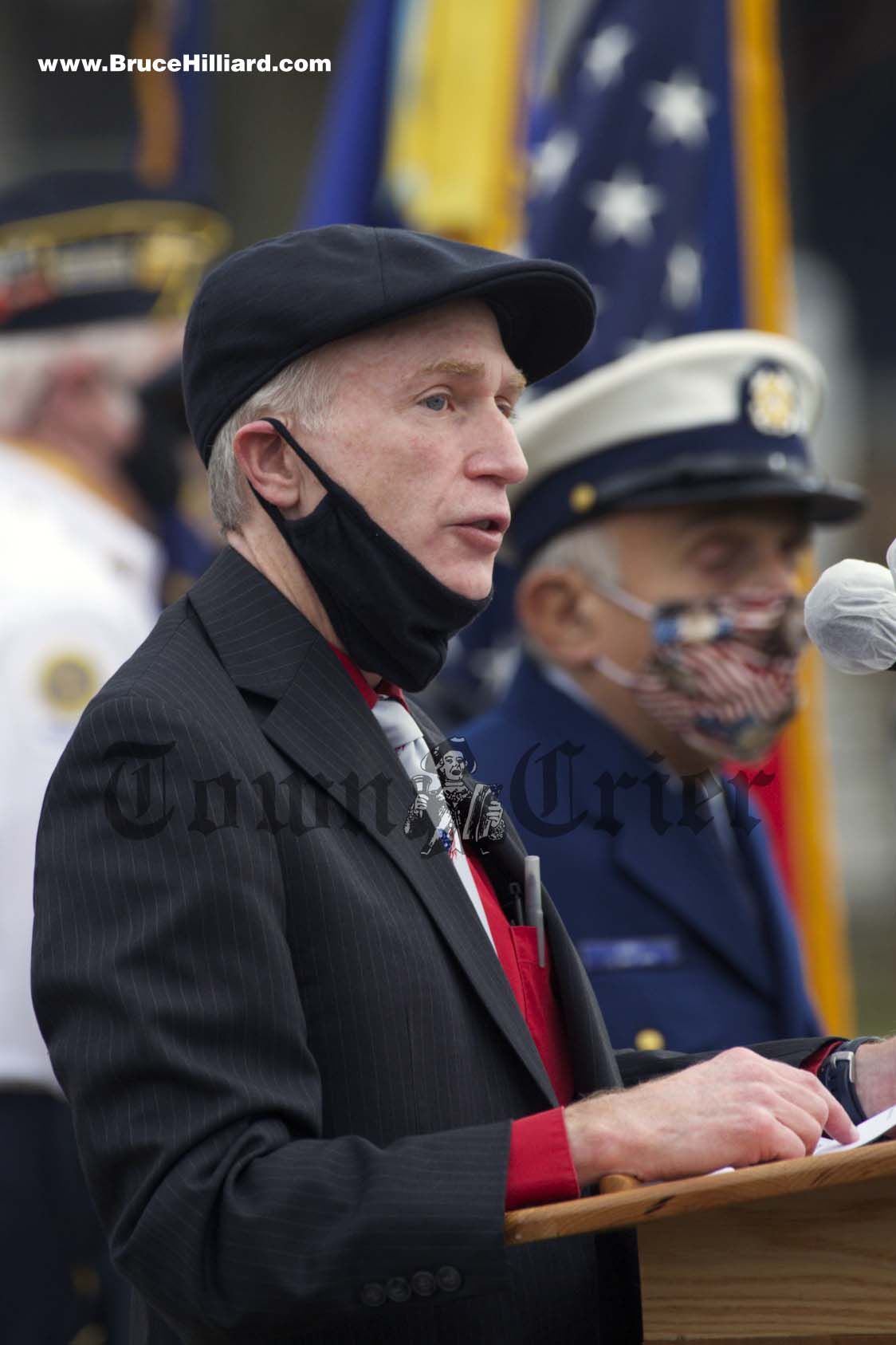 WILMINGTON — On Nov. 11, Wilmington Vet­erans Services held their annual Veterans Day ceremony. It began with a march through the town common accompanied by students in the Wilmington High School Marching Band.

Town Manager Jeff Hull had asked residents in a statement to attend remotely due to the new regulations, which ask that no more than 50 people assemble in person in an outdoor setting.

Before they raised the flags on the town common flagpole, Veterans Services Director Lou Cimaglia opened and introduced the national anthem. He then welcomed the Chaplain of American Legion Post 136 to pray.

Cimaglia returned to say a few words of his own recognizing veterans for their service.

“Your presence here shows that you remember our veterans: those who currently serve, those who are recovering, and those who paid the ultimate sacrifice and didn’t get to wear the title of veteran,” he said to those in attendance.

He referenced a few ways that Wilmington has honored its veterans this year, like in Boy Scouts raking the lawns of veterans and their families and the street named in honor of Sergeant George Veloza.

When State Representa­tive David Robertson spoke, he mentioned Wil­mington’s history in service of the army and the navy.

“The proper words to con­vey how deep our thanks go escape me,” he said.

He called Mike and Lou Cimaglia “two exceptional veterans… [who make it their] continuing mission to welcome and help veterans.”

He also addressed Wil­ming­ton’s gold star families present and thanked them for their sacrifice.

Cimaglia then said that veterans and their families in Wilmington are lucky to have leaders that show that they care for them in their actions be­fore ac­knowledging the Board of Selectmen and welcoming Chairman Jona­than Eaton to the microphone.

Eaton established how Veterans Day is in memory of Armistice Day 1919 which commemorated the end of World War I the year before.

“Veterans Day pays tribute to men and women who have served our country, both living and de­ceased, in times of war and times of peace,” he said. “We owe a debt of gratitude and thanks to vet­erans each and every day.”

He also mentioned that the United States loses 22 veterans per day from suicide and how veterans make it possible for this country to work toward justice.

State Senator Bruce Tarr shared that he was grateful to the Veterans Servi­ces Department for their commitment.

“One thing that should never be disrupted for any reason, any cause, any time, is support for men and women who have served our country,” he said. “No matter how we may disagree, we have a commonality of purpose: to hold high the values of this great nation that they have fought for, died for, and made incalculable sacrifices for.”

He suggested that folks continue to honor the lega­cy of our veterans and work toward the example of unity that they’ve displayed.

Next, Hull took his turn to speak on behalf of Wil­mington’s veterans.

“Today in particular, to­morrow as well, tell the vet­erans we meet, ‘We sa­lute you and honor you. We rise to your occasion.’”

He brought attention to the way that veterans have made sacrifices overseas and then returned home to pick up where they left off while dealing with the weight of loss and brokenness they had experienced.

Cimaglia introduced the fallen heroes memorial being unveiled that day from the Eagle Scout project of Liam Prigmore.

“I couldn’t be prouder of him,” he said.

He then invited Francis­co Urena, the former Law­rence Veterans Director and Iraq war veteran, to speak. In addition to honoring the sacrifice of veterans and gold star families, Urena called Prig­more’s project a tremendous achievement.

Wilmington resident and Austin Prep senior Liam Prigmore thanked everyone who contributed to his project and helped him be­come an Eagle Scout.

“I didn’t carry this stone over here myself,” he joked. “These monuments will stand here forever as a reminder that Wilmington supports armed forces. For that reason I’m proud to call Wilmington my home.”

Prigmore’s Scout Mas­ter, Bill Clint, also got on the microphone to thank everyone for their support of the project.

The veterans director pre­sented Prigmore with two eagle book ends to show his appreciation for his work.

“For the soldiers who have stood guard in peacetime, seen combat, paid the ultimate sacrifice, or are wounded, we must always remember and thank these men and wo­men and their families,” he continued.

The monument naming all of Wilmington’s fallen heroes from World War II to Iraq was unveiled.

Cimaglia thanked various town department heads, chiefs, and officials for participating and honoring veterans. He also read a letter written by a gold star family member who wrote, “We must remember the past and smile, but also look forward to the future and hope.”

He finished by thanking everyone in attendance and acknowledging the new memorial before the marching band played to end the ceremony.