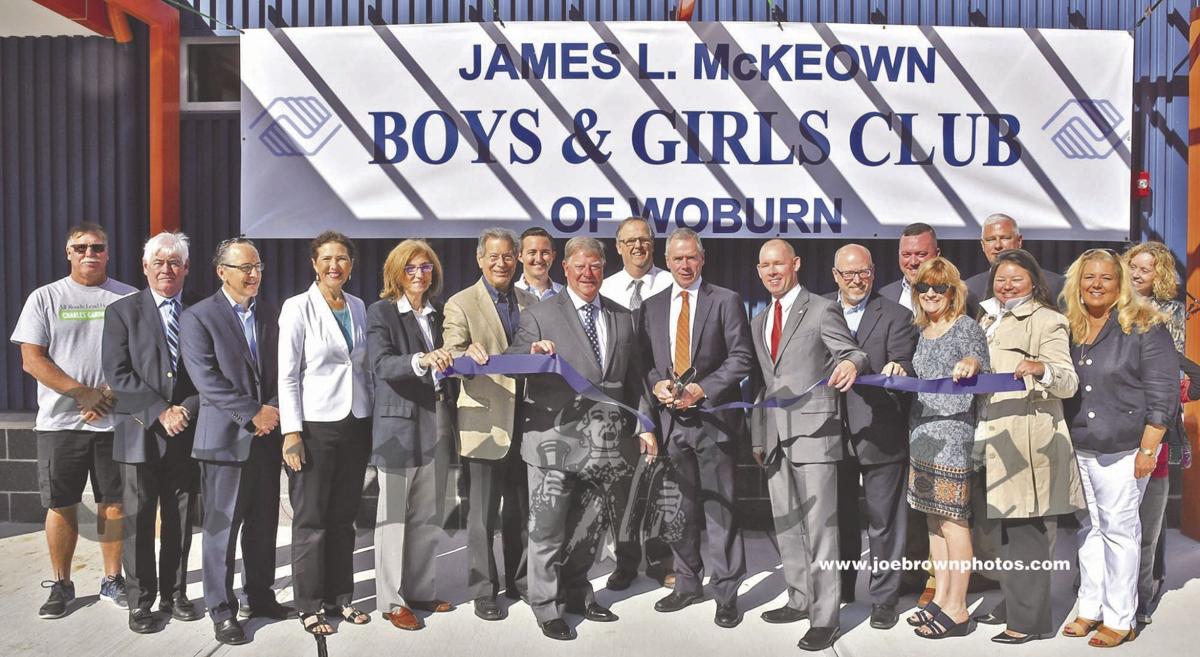 City Leaders cut the ribbon for the newly refurbished Boys and Girls Club.

The new commercial sized kitchen at the Boys and Girls Club. (Photo by joebrownphotos.com) 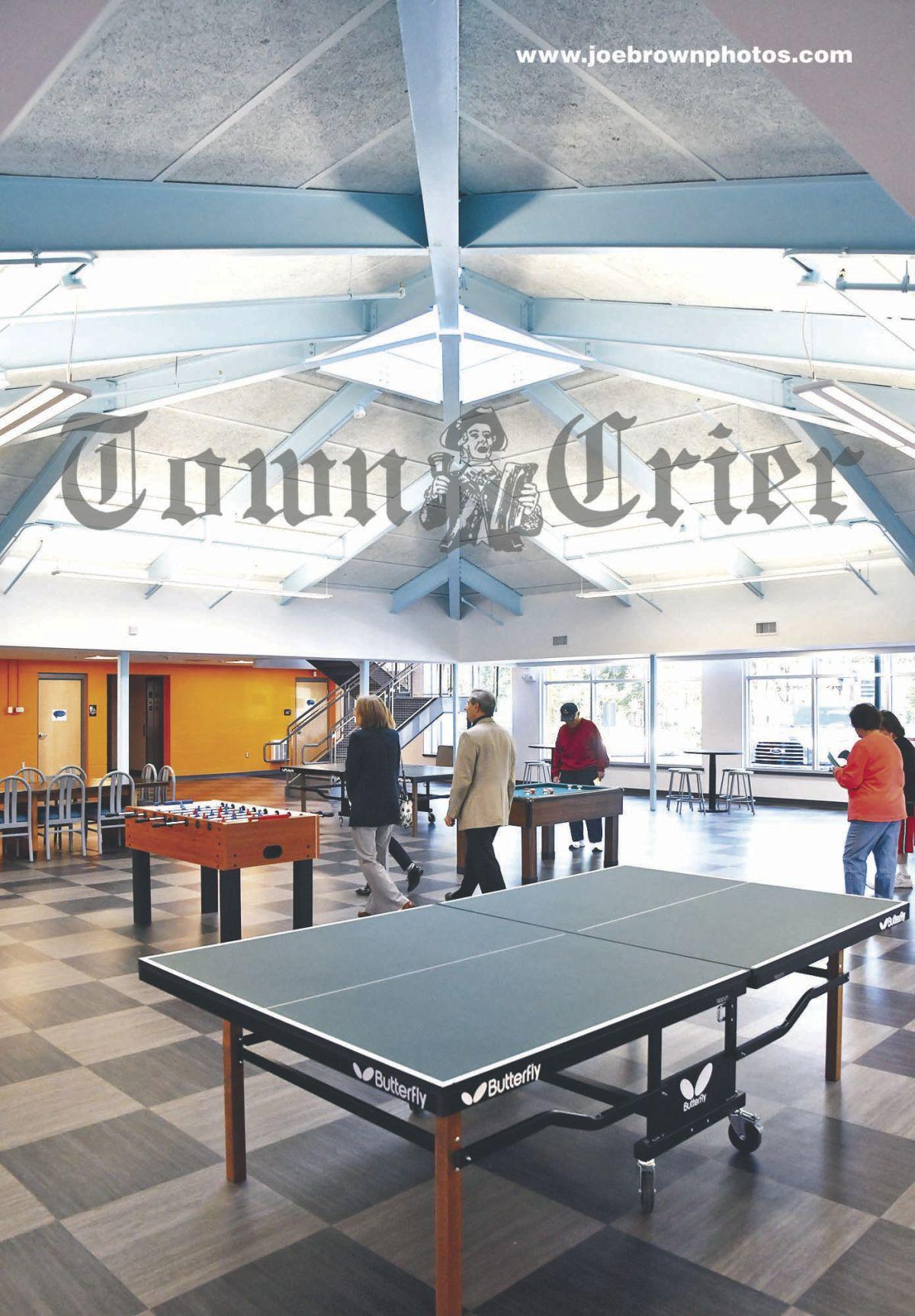 The former and now current Game Room with it's peaked ceiling, is preserved in the refurbished B+G Club of Woburn. (Photo by joebrownphotos.com)

City Leaders cut the ribbon for the newly refurbished Boys and Girls Club.

The new commercial sized kitchen at the Boys and Girls Club. (Photo by joebrownphotos.com)

The former and now current Game Room with it's peaked ceiling, is preserved in the refurbished B+G Club of Woburn. (Photo by joebrownphotos.com)

The “wow factor” was much in evidence on Sat­urday as many members of the general public were overwhelmed and had their first look at the new James L. McKeown Boys & Girls Club.

The club is named after Winchester resident Jamie McKeown who passed away in 1996 at age 41.

“It’s incredible,” was a re­peated declaration of enthusiasm after a parking lot full of enthusiastic support packed the newly-paved front parking lot.

The “wow” factor also came into play as Presi­dent Michael “Tucker” Donaghey, a former member, remarked in formal tones at the state of the ribbon cutting ceremony: “Wow, what a crowd!.

The $8.5 million modern facility has two new regular basketball courts and an obviously expanded swimming pool that come into play, along with an en­larged Teen Center, Games Room and a modern kit­chen.

Good elbow room was everywhere and appreciated by attendees.

President Donaghey was quick to point out, “I want to first and foremost thank Mayor Scott Galvin, Rich Haggerty and the entire City Council who helped us ‘rise from the ashes’ in our ‘darkest days’ when we were go­ing to be ‘essentially homeless for one year.’ Donaghey also exclaimed in a smiling fashion when he thought, “OMG — the city might bill me for all the times I called their cell phones saying ‘Help.’”

The club, he pointed out from a podium in a sun-filled parking lot to attendees, is now “rebuilt and ready to serve the youth of the area. Because of our expanded building we can now easily double the youth we serve.”

He had special praise for other public officials in at­tendance like Senator Cindy Friedman “who is new to her position. She helped Sen Ken Donnnelly (now deceased) secure our temporary home at the old Clapp School.”

He also thanked Rep. James Dwyer of Woburn and Rep. Jay Kaufman of Lex­ing­ton who were right alongside helping every step of the way, too.

“Just ask Jimmy Dwyer how many times I called him for help, too!”

Donaghey continued: “May­or Galvin or Chief (Robert) Ferullo understand our message: this is a safe place for kids to come to play, learn and grow. This is a ‘second home’ to all who become part of the Boys & Girls Club community.”

He also called it a big day not only for Woburn but for adjacent communities like Burlington, Winchester, Lex­ington and Wilmington.

“We officially service these five communities in our char­ter (30 percent of membership).”

In turn, he reflected on a Wo­burn priest, Monsignor John McLaughlin, who often started a sermon “FACT — all roads lead to Woburn.” The proclamation, he said, referred to the 25 total communities served by the club.”

“We are no longer a gym and swim like it was when I was a kid. Origami is big today — who knew. There are individual activities, as well as team activities, that are available.”

“We are needed more than ever to help the youth navigate life. Because you are here today, these kids have a better chance.”

Recognition was also given to a host of donors including John and Kathy Flaherty of Woburn and Dennis Clarke and Joel Sweets representing Cummings Properties and owner William Cum­mings, a former board member and long-time supporter.

Neighbors also received a nice “pat on the back” to include Lance Solimini, the Coakleys (thanks, Sean), the Boyles, Mrs. Carr and all the Place Lane residents in a complex to the south. Also included was Past President and JLMBGC lawyer Shaun Briere, CPA Ed Johnson, Peter Carbone and Scott Tully, Matt Donaghey, Jack Ryan, and John Connolly.

On Saturday, a host of individuals from members of the McKeown family like his wife Denise and two daughters, Molly and Kelly, helped with the ribbon cutting as did staffers like Executive Director Julie Gage and the board of directors and Buil­ding Committee members.

Various city officials and individuals had much to say, like:

• Julie Gage: “As of last Thursday, we turned it back to the kids!”

• Peter Carbone Jr., (Buil­ding Committee): “I was probably one of first kids in here. It feels like seven years but it’s been 45. We are like a million short but it is great to have a building like this.”

• Mayor Scott Galvin: “Great day for the city of Woburn. Definitely, all roads lead to Woburn - I-93 and the like. Great for our children and community. I’m proud to be here and all deserve credit.”

• City Council President Richard Haggerty: “I am so proud of the effort of all. It’s truly remarkable and exciting for kids in these times having a new library. My grandfather was among the first and it was all really inspiring to people.”

• Sen. Cindy Friedman: “It’s great at the State House to work on something so positive. People are just dying to get inside.”

• Rep. James Dwyer: “We live in a tremendous community by buildings like this. A community treasure. En­joy this building.”

• Rep. Jay Kaufman: “This is the heart and soul of the community; it’s something to pass on to the next generation.”

• Denise McKeown: “I am truly humbled and honored. (Jamie) had this place mostly in his heart of memorialized places. It’s a special memorial. And Mike Donag­hey who was not afraid, got people to donate and you were truly amazing. Same for Julie (Gage).”

• George Holland (Boy of Year 1970): “I saw so many things; this is such a great day. We spent every minute of our free time here — our second home — and it didn’t take long to realize Jamie (McKeown) was someone special. All the kids went too him, like in the time around 1974.”

Everyone who came and went on Saturday had special comments about the scope and services of the new building.

The daughter of a long-time secretary to the club, Kappy Brosnan, put it this way: “This is all unbelievable. I am thrilled beyond words.”

Former Executive Director Glen Stirling was also in awe, having been with the club in many capacities per five decades.

“This is all amazing. It’s only my second trip to this new building and it’s tre­mendous. It would take us 10-15 minutes at closing (9:30 p.m.) at nights just to make sure everyone was out,” he reflected.

Another Executive Direc­tor just before him, Rick Metters, currently a Woburn School Committee member, intended: “In this new building, it will take an hour or more!”

A vital organization and part of the Woburn community fabric for over a half century (53 years), the McKeown Boys & Girls Club has become a major community asset, serving now some 1,400 youngsters starting from age eight right through high school years.