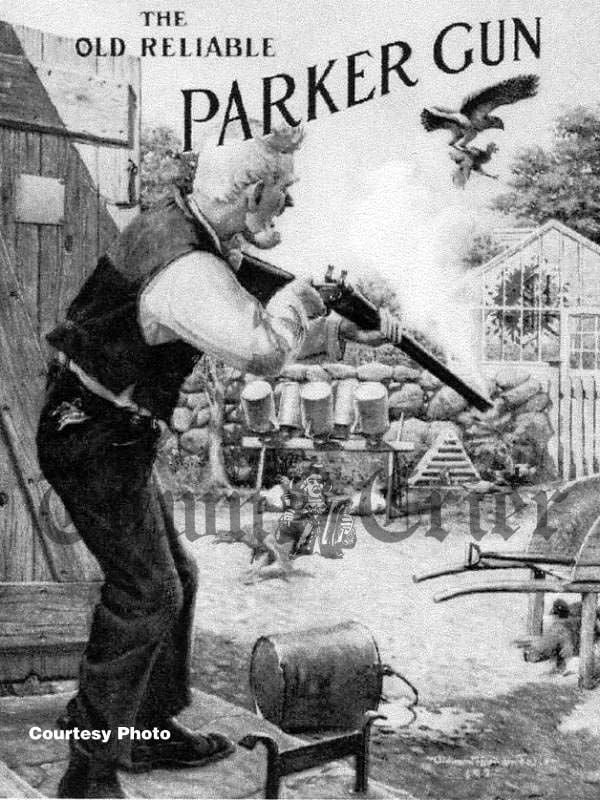 Some of Foster's work was on a humorous vein, like this ad for Parker shotguns. (Courtesy photo) 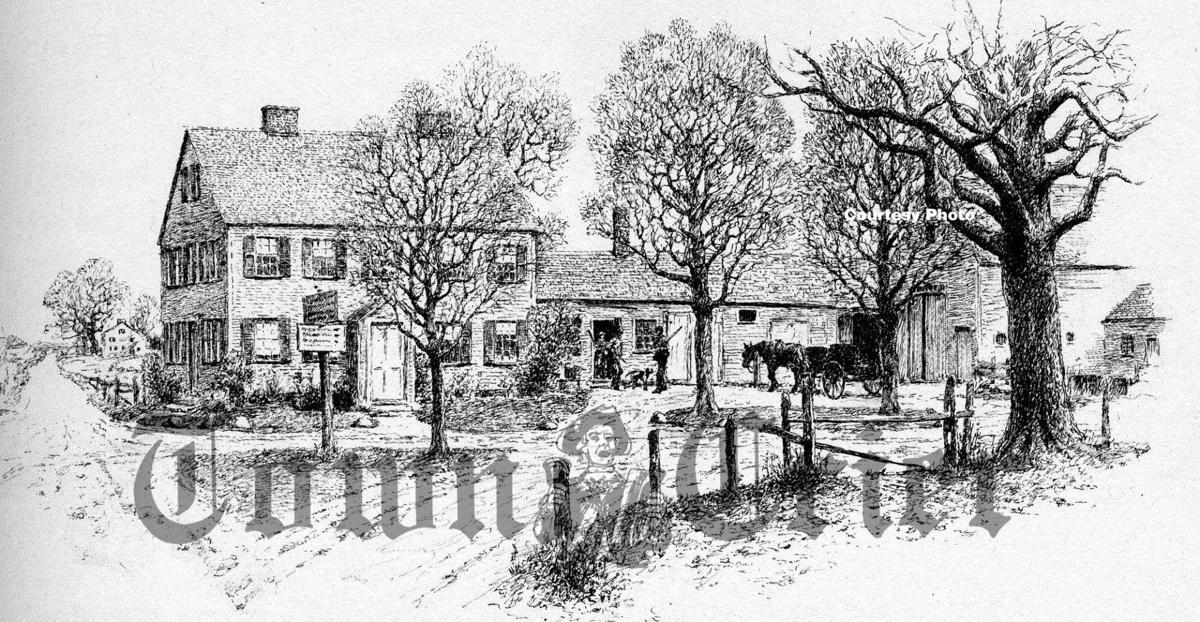 The old stagecoach tavern at Shawsheen and Main streets in Tewksbury. (Courtesy photo)

Some of Foster's work was on a humorous vein, like this ad for Parker shotguns. (Courtesy photo)

The old stagecoach tavern at Shawsheen and Main streets in Tewksbury. (Courtesy photo)

Very few people have the good fortune to make a ca­reer doing what they love. Illustrator William Harnden Foster, the ”Father of Skeet,” built a career around the things he loved most, trains and hunting.

There was no place on earth where Bill Foster was happier than tramping the Shawsheen meadow environs with his grandfather, Everel Harnden. Everel had grown up in Wilmington, and sometime before 1880, moved into the old stagecoach tavern at Shawsheen and Main streets in Tewksbury, on the old Boston - Lowell turnpike. The illustration shows the house close into the corner, with the road to Lowell on the left. Shawsheen Street runs to Andover on the right.

“What a place was the old Tewksbury homestead for a gun-struck boy,” wrote Fos­ter, describing the tavern as a fall hunting camp, with his grandfather’s many friends.

Their hounds would be in the barn stalls and their guns in the corners in the kitchen.

That hunting tradition had a strong influence on the young Bill Foster, who was first allowed to hunt at age 12, in 1898. He had a life-long love of many facets of hunting: guns, dogs, birds, along with tradition and fellowship.

Most of the Fosters were railroad men, in the heyday of trains. While in high school, Bill began drawing trains, which proved to be his ticket to a great career. His work was good enough to gain ad­mission to the Museum of Fine Arts School in Boston.

Advanced study with How­ard Pyle led him into illustration, a bread & butter path for artists. Pyle’s students were generally quite successful, N.C. Wyeth, Norman Rock­well, among them.

With Pyle’s encouragement, he submitted a collection of railroad illustrations to Scrib­ner’s Magazine. Not only did the magazine pay him an amazing sum, but it encouraged him to write a story about them, landing another skill in Foster’s toolbox.

He embarked on a career of illustration and writing spanning a transitional era in transportation.

One of his memorable il­lustrations showed a 1909 Olds­mobile racing the 20th Century Limited, the New York Central’s famous train which ran for 65 years be­tween New York and Chica­go. Both companies became Foster’s clients for decades, and the Limited was a fa­vorite subject.

The building of the Pana­ma Canal was the third leg in monumental transportation advances in the early 20th century. Foster travelled to Panama to write and illustrate an article for Scribner’s, published in 1910.

In 1909, he signed onto a ship transporting live cattle from East Boston to Liver­pool, to write and illustrate the process. Can you imagine having to secure and care for 500 head of cattle for 10 days on board a ship? This was for no pay, only passage and food. Crews were generally made up of immigrants wishing to re­turn home, and it is not something they would re­peat. It was a most unpleasant voyage, yet for the era, it was not uncommon.

Cattle on the hoof was worth double the price of processed meat in England. It would be six years before the article was printed in Harper’s magazine. His artwork of the voyage included some paintings, but Har­per’s printed them in black & white. The originals are now in the collection of the Portland Museum of Art.

He sold at least a dozen illustrations to the Saturday Evening Post to accompany articles written by others.

The railroad line through Andover ran directly to Maine. In 1908, he built a sum­mer cabin in South Free­port, where he became friends with L.L. Bean. Bean in 1911 introduced the Maine hunting shoe, which he sold in his store and by mail or­der. When Bean produced his first catalog in 1925, he used a Foster illustration on the cover. It showed a very surprised hunter, attired and outfitted with L.L. Bean gear, coming face to face with a moose. Foster loved to put some humor in his work whenever possible.

In 1922, he became the editor of two sporting magazines, published in Boston. He loved the magazines, and the position allowed him the vehicle of expression for his artwork and writing.

Friends in Andover, Char­les and Henry Davies, along with Foster, had a shooting game, which they called “shooting round the clock,” shooting clay pigeons in a circular pattern. The site where the game was developed was in Andover, off Das­­comb Road. Then a neigh­bor built some chicken houses, and the circle had to be cut in half. Searching for a name, Foster ran a contest in National Sportsman in 1926. The winning entry was “skeet,” the Scandinavian word for shoot.

Skeet shooting became quite popular, and was used by the U.S. Army in World War II for training troops to shoot at moving targets. When the National Skeet Hall of Fame was established in 1970, Bill Foster was its first inductee.

Foster retired from the ma­gazines in 1935, turning his attention to writing his legacy book, “New England Grouse Shooting.” He tells some great stories about Ev Harn­den and “The Little Gun,” a 16 gauge Parker shotgun. When as Ev Harnden ac­quired it, about 1893, his hunting friends thought he had lost his mind.

Foster wrote, “As news of ‘The Little Gun’ spread, lanky men dropped in of an evening to ‘heft’ it and speculate on its practical value. ‘Gee-rifus, Ev!’ they’d say, ‘she don’t weigh nothin’, does she?’ Then they’d set the front log in the fireplace to sizzling, to add impressiveness to the statement.”

“The Little Gun” weighed six and a half pounds, nearly a pound and a half lighter than anything carried by local gunners.

Foster wrote “The fame of the little gun became im­mortal the morning that grandfather and Elbridge Gerry stood in the same cart road and (the dogs) drove a fox right along the edge of Deacon Pillsbury’s wood-lot. Mr. Gerry swung onto him with his 12-bore Scott. . . then, deciding it was hopeless, lowered it without shooting. Ev Harnden, 20 rods farther on, had the fox at the same distance, a little farther if anything, waited for him to stretch out at the top of a jump and dropped him in a heap, using only the left barrel. Elbridge Gerry paced it off, slowly and somewhat dolefully.

“Ev,” he said, “that was nigh onto 54 honest yards, and by the power o’ mud, that was the thunderin’est shot I ever hope to see.”

Foster inherited that shotgun, and it is still in his family. A Parker 16 is a valuable gun, and it has been written that the only one that ex­ceeds the value of Foster’s belonged to Annie Oakely.

Foster gives some history of market gunners and tells of the heath hen and passenger pigeon, both extinct. He wrote about hunters setting off on foot for a day-long tramp, lunch in a paper bag and their dog at heel.

“If anybody comes lookin’ for me, tell ‘em it ain’t no use.”

A chapter on bird dogs discusses the traits of several breeds and the varying standards for them.

Foster was an expert on dogs, and was judging a dog trials event in Connecticut in late 1941. He suffered a heart attack and died in the field. His book, released by Scribner’s two months later, remains a classic among bird hunters.