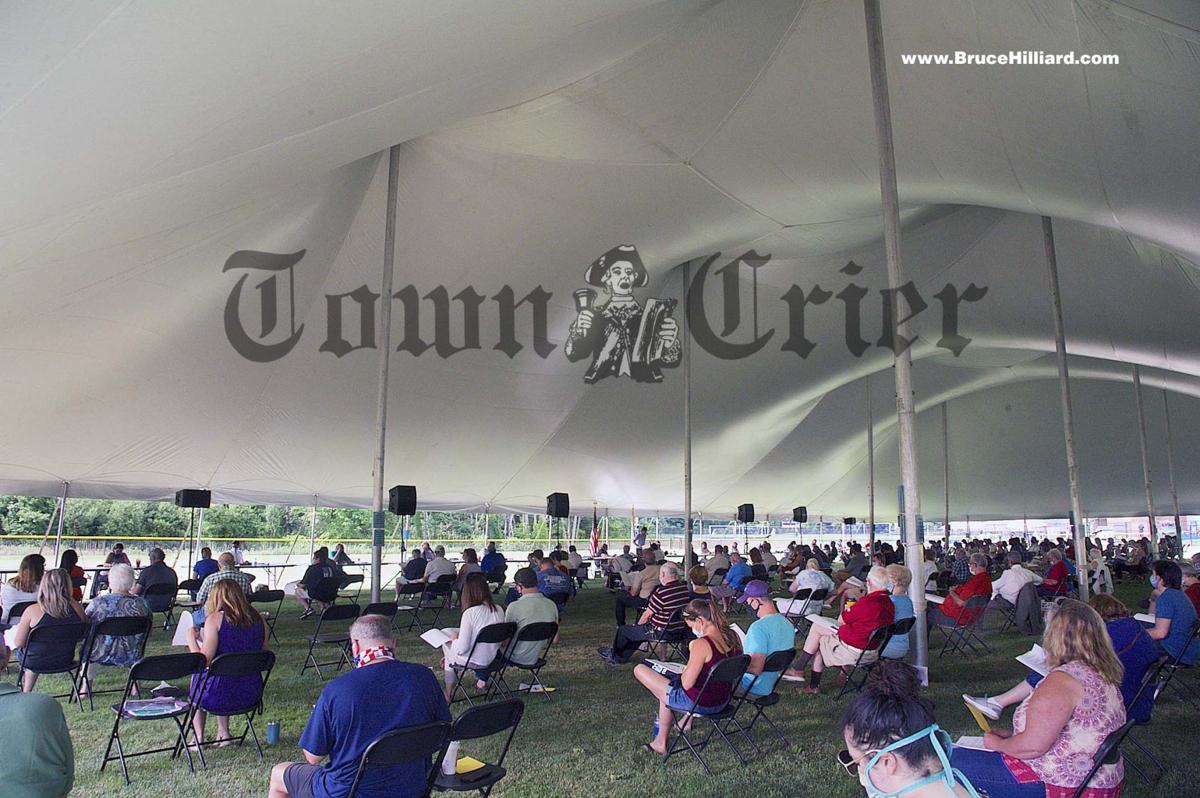 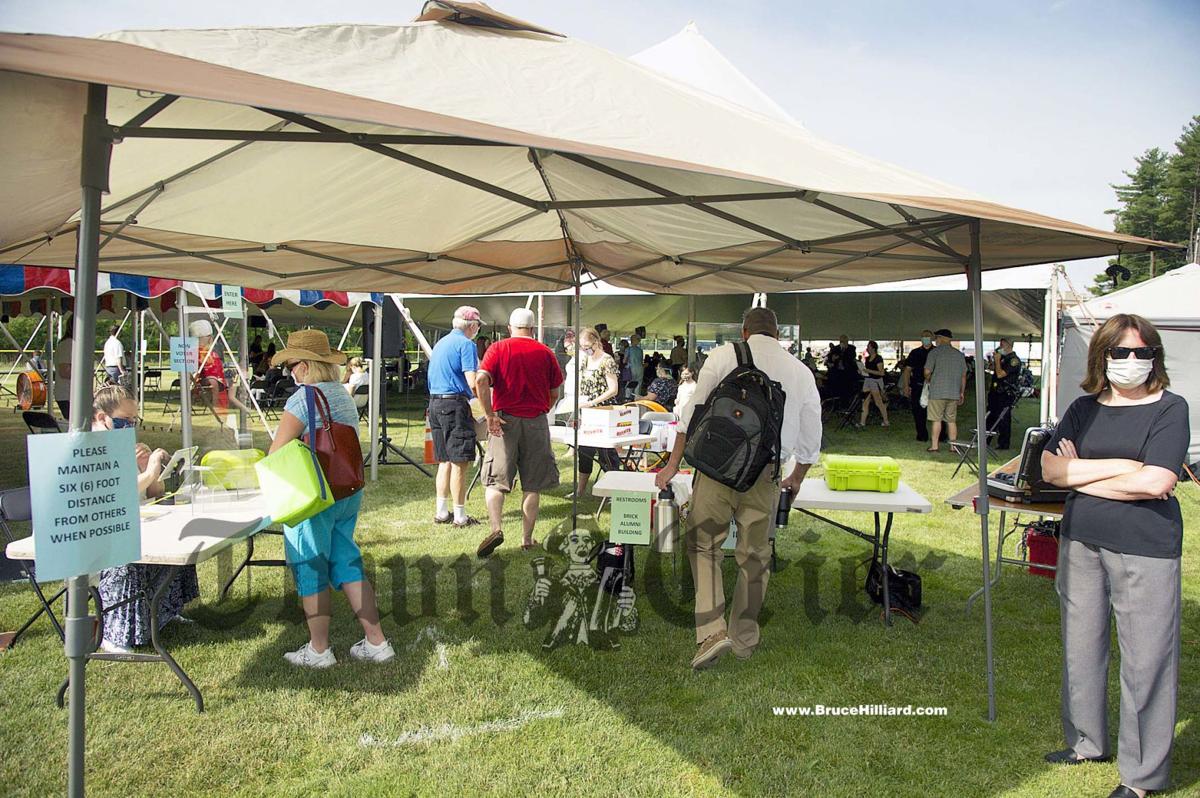 WILMINGTON — Artic­le 65 kicked off random selection at Saturday’s Town Meeting with a long discussion. This is the article to add a section to the by-law prohibiting cer­tain exotic animals in traveling animal acts coming to town. Jenne Sidoni, the petitioner, clarified in the discussion that the article is not against Shriner’s but for animals. She mentioned that exotic animals used in circuses are put in chains, solitary confinement, and cages — and this is psychologically and physically breaking them and their spirits.

Shriner’s representative Roger Metcalfe urged residents not to let a small amount of animal rights activists limit their ability to see these animals.

“We want to teach children to love and respect animals,” he said.

Several residents shared the sentiment the industry makes money on animal cruelty. While the Moder­ator first said the voice vote went to the no’s, a resident made a motion to have a standing vote which ultimately passed 84 to 74.

The next article considered was article 49, which would add a section to the by-law allowing the town’s attorney-client communications not to be added to public record until the relevant litigation is over. Town counsel provided this clarification before it was approved.

The article concerning adding a construction noise by-law was brought up next. Healthy debate en­sued including town leaders who spoke out in opposition. In particular, they interpreted it to mean that any construction that re­quired a permit from the town would also require a permit from the Chief of Police.

Finance Committee mem­ber Lee Martinson said, “I read it that I have to ask permission to do work on my house.”

While residents agreed that the wording could be better, some said that this would be a good place to start. Police Chief Joseph Desmond, who participated on the by-law committee that wrote this proposed section, said the wording was borrowed from towns in the community’s by-laws.

Town Manager Jeff Hull added that the state law doesn’t allow any action to be taken in construction noise complaints. This item failed after a standing vote of 87 against and 57 in agreement.

For article 64, Town Mod­erator Robert Peterson recused himself and Mike Champoux became the Mod­erator. It was then that Robert G. Peterson Sr. made the motion for the article to rezone 100 and 102 West St. from general business and general in­dustrial to neighborhood mixed use. He reasoned that his client’s proposed use would bring less traffic than previous uses of the plot. He shared that his client, Derek Santini, wants to build a residential building and two restaurants on the property.

Martinson maintained that while he is not in favor of the manner in which the plan is getting started, technically San­tini is doing it the right way and he would vote to approve. Several other residents shared their appro­val of this proposed use. In a standing vote, the article was approved 123 to 3.

Article 58 then passed with little discussion. Next up was article 47, which proposed that the town budget would always be taken up as an omnibus vote from next year’s Town Meeting forward.

Peterson, who had then returned, explained there would always be an option to make a motion for the omnibus vote, but should this article be passed, there would not. The article failed.

Article 52 regarded the exemption of property tax to surviving parents of veterans who have died. Vet­erans Services Director Lou Cimaglia spoke during the discussion to add how disabled veterans also get a discount on their property tax. Town Meeting ap­proved the article.

After article 50 passed without discussion to edit by-law language prohibiting dogs on the town beach, article 60 passed by standing vote.

The Board of Selectmen brought forward article 45, which proposed to have the Town Meeting every year on the last Saturday in April and the town election the Saturday before.

This invited contention from residents who said that these would be the weekends before and after school vacation, when fa­milies with kids would be out of town. Suzanne Sul­livan specifically remembered the by-law was changed to the current dates for the Town Meet­ing due to lack of attendance on the newly proposed dates.

The moderator recalled the Board of Selectmen had edited the recommendation from the by-law committee, which fixed the date for the town election. Some of the ideas that the selectmen eventually stated in support of this article were that last year’s Town Meeting was largely unattended, and that moving up Town Meeting would make the budget due an entire month earlier.

Residents encouraged other means of engaging voters while voting down the article.

With more commentary about the endlessness of Town Meeting, article 46 passed to set the Town Meeting to 9 am. Article 53 was approved.

Article 57 brought discussion concerning the rezoning of over 100 parcels n the McDonald Road area. Director of Planning and Conservation Valerie Ging­rich explained all of the residents in the neighborhood were notified. She reiterated that R-20 would best fit the entire area and leaves only a few opportunities for new development. It passed by a standing vote.

The next article to allow the Wilmington Conserva­tion Commission the control of a few parcels that the town owns passed.

When article 62 came up, residents felt that they couldn’t vote to pass this article when they’d al­ready passed article 14 for the feasibility study and schematic design of a new senior center.

“In due respect to Mi­chael McCoy, the Elderly Services Commission supported the article written by the Board of Select­men,” said Elderly Ser­vices Director Terri Mar­ciello.

McCoy maintained this would allow all of the mon­ey for the project to come from free cash and get the seniors what they wanted all at once. The article failed.

Residents next expressed disapproval for the proposed article that would set all of the Town Meeting articles as enumerated for future meetings. Several residents shared they like random because it keeps people at the meeting longer.

Sullivan asked, “Do you want people to come for some of [Town Meeting] or not come because they’re expected to stay for all of it?”

This article was defeated.

The meeting ended after the moderator announced that he won’t be running for re-election next year.

He said, “I’m going to make sure that these meetings look a lot different in the future.”

Peterson added he can’t accomplish the changes that he wants to see in Town Meeting in the role of Town Moderator.