Under the direction of Shawn Maguire, the Wilmington Middle School Football team practices three nights a week without pads, without contact drills, all while wearing masks, despite no games on the schedule. On Monday night, the group of dedicated players worked through a drill during practice held under the lights at the Glen Road Field Complex. (photo by JoeBrownphotos.com). 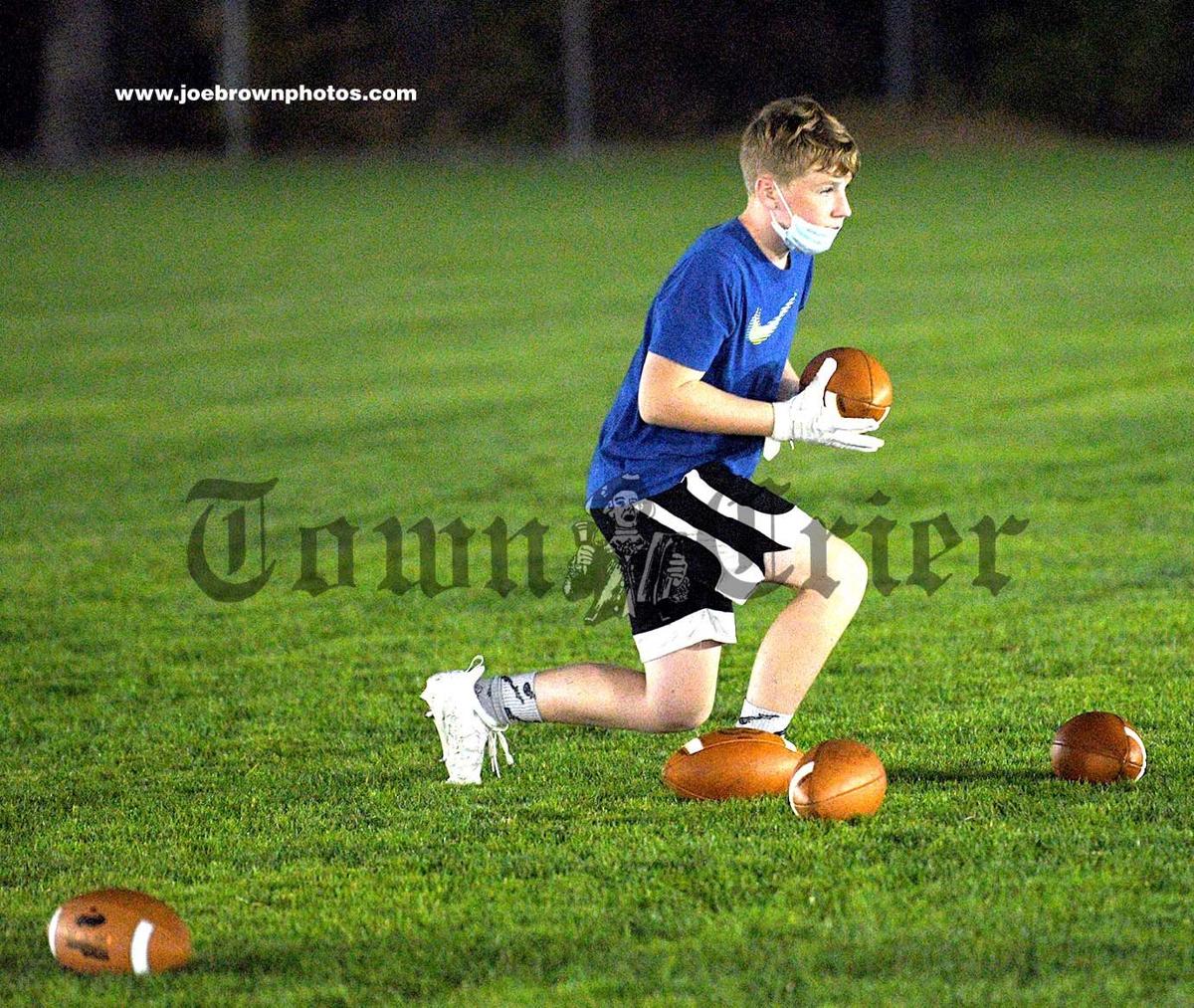 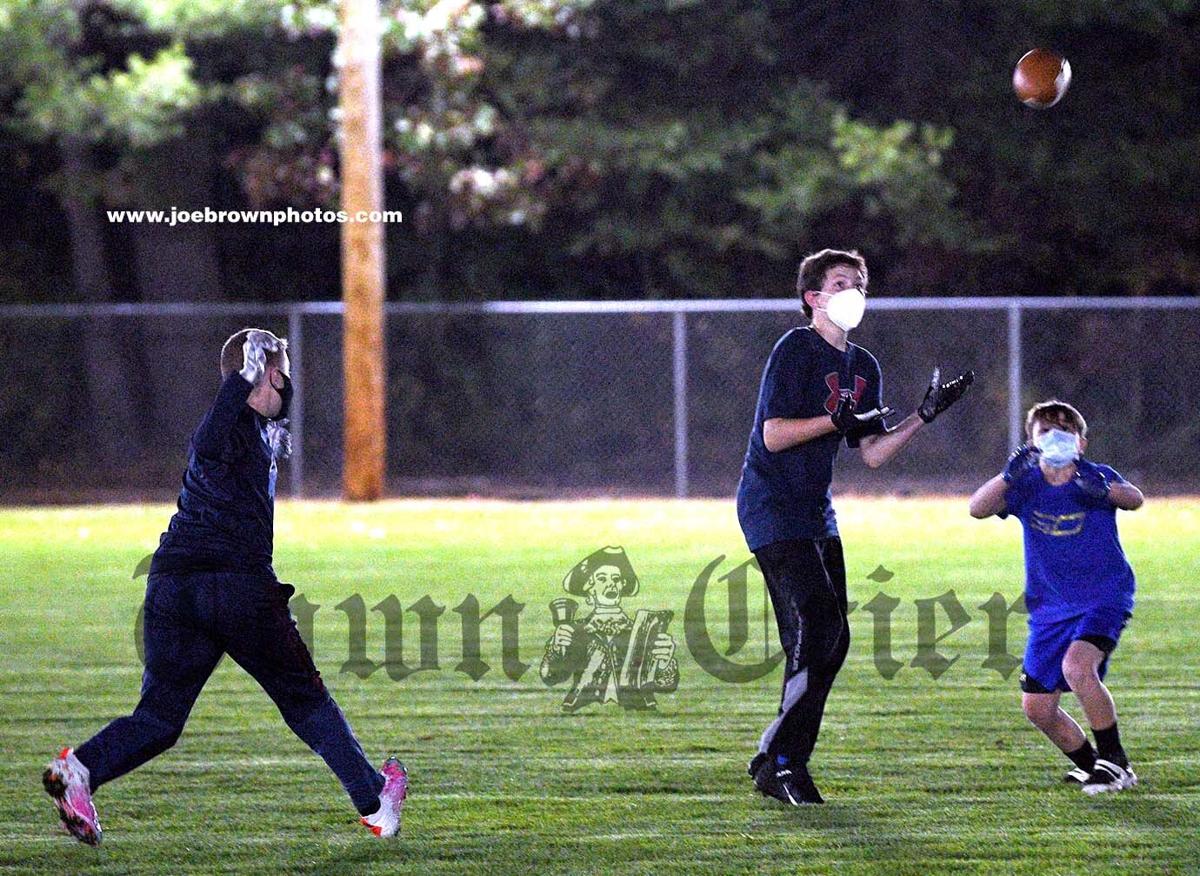 Under the direction of Shawn Maguire, the Wilmington Middle School Football team practices three nights a week without pads, without contact drills, all while wearing masks, despite no games on the schedule. On Monday night, the group of dedicated players worked through a drill during practice held under the lights at the Glen Road Field Complex. (photo by JoeBrownphotos.com).

WILMINGTON – Like most everything else in the world in 2020, things are different this year for the Wilmington Middle School Football team. First of all, there are no pads. There is no tackling, no contact of any kind actually. Most importantly there are no games. Things don’t get much different than they are right now for this young group of Wildcats.

But some things do still remain the same. The first thing you notice when you attend one of their practices, along with the sight of the players in shorts and t-shirts instead of shoulder pads and helmets, is the smiles on the players faces. The joy of at least playing some semblance of the game they all love so much. It might not be the season they had planned on, but for the 30-plus players who show up for practice three nights a week without the promise of a game on the weekend, simply getting on the field is a victory in itself.

The Wildcats, who are coached by former long time Burlington High Football coach Shawn Maguire, are coming off an incredible season in 2019, when they went 9-1 with a league championship game loss to Woburn being their only setback of the season. They will not get a chance to repeat, or even improve on last season success, at least not until February or March, but that has hardly dimmed their enthusiasm. Three nights a week, whether it be at the Glen Road Field or Yentile Farm, eager sixth, seventh and eighth graders are lined up and ready to play.

“That’s the biggest thing I am proud of with this group. We have over thirty kids a night and some nights as many as forty-five,” Maguire said. “Kids still have other things like hockey and things like that, so that affects the numbers. But I am very proud of them, and the effort they have put in, especially with no games in the immediate future. They come in and they work hard every night.”

The Wildcats are part of the Eastern Mass Middlesex League Middle School program. The team is made up of sixth seventh and eighth graders, but mostly seventh and eighth. There are some sixth graders this year because there is no Pop Warner program. Regardless of their age they are all there for one reason, their love of the game of football.

Maguire would know better than anyone about this group’s love of the game. In addition to coaching at Burlington High for over 25 years, including 24 as head coach, he also coached in the Wilmington Pop Warner program for six years, coaching many of the same players he now leads at the Middle School, where he is in his second year as head coach of the team.

A few of those eighth graders took some time out of Monday’s practice to talk about what brought them back to the field this season.

Curtis Powers is in his third year with the team, having never played football before joining the middle school squad. But the offensive lineman/defensive tackle grew to love the game very quickly, and has loved his time with the Wildcats.

“It’s been good this season,” Powers said. “There are some drawbacks to it because we wish we were playing games, but we are still motivated to come out here and play. I am happy to be getting into better shape instead of just being stuck in my house for the last six months.”

Most seasons, the preseason gets underway in August, with the season starting in the first week of September with at least eight games at both the varsity and junior varsity level. This season has been a little different, with the season not starting until the middle of September and running for only six weeks with no games. But Maguire and his coaching staff are still taking the same approach they took last season in preparing their players

“We run it like a high school program, so when the kids leave from eighth grade, they are ready to go on to high school. We run a pretty advanced offense, and conditioning wise we run them pretty hard,” Maguire said. “We make it clear that it’s a big step away from Pop Warner. It’s much closer to high school football than it is to Pop Warner.”

“We have tried to put a lot of offensive and defensive stuff in so that when we come back and hopefully have a season in February, March or April we will be ready,” Maguire said. “All of the schools have agreed that they want to do it, but like everybody else we are just waiting to see what happens and hoping and praying that we get to that point.

When and if there is a season, the players know that this coaching staff will have them well prepared.

“We have a great coaching staff,” Walsh said. “Coach Maguire is a great head coach. He runs the offense and does a lot with the defense as well and he is a great coach. The whole staff is great.”

Powers has also appreciated all of the hard work the coaching staff has put in.

“The whole has staff has been very supportive and they are always pushing us harder to try and do our best,” Powers said. “Obviously you are going to get better over time, so it is great that they are so supportive. It feels like they are really working us hard to get us ready to play high school as well.”

For Shane Maguire, playing for his father throughout his life has been a great experience, and he also knows that coach Maguire, along with the other coaches are doing a great job preparing them for the next level.

“My dad pushes me to do my best because he wants me to do well and to learn the offense and help all the other players,” Maguire said. “This is good preparation for high school. It’s a nice shift from Pop Warner to high school.”

One of the things that has made coach Maguire and the rest of the coaching staff happiest this season has been the leadership of eighth graders like Maguire, Walsh, Powers and others.

“There is a lot to learn, with our offense especially and they have been helping out a lot,” Coach Maguire said. “They come down early to practice, running patterns and getting kids more repetitions so they can learn, so that when we actually do team stuff they can execute properly. The older kids have been a very big help and I expect that every year from every team I have had.”

That’s another thing that hasn’t changed despite all of the outside distractions. Maguire still expects the same from this group of players that he has always expected, and so far, they have most certainly delivered.

“I run things pretty much the same as I always have. I expect a lot out of the kids. I never like to underestimate kids. I like to expect more of them and they in turn expect more out of themselves. And they really do,” Maguire said. “They push each other, and they work hard. It’s been like a long preseason, but it has worked out really well. We are putting in more stuff now, so that when we are able to start a season, we will be ready to go. We will need about two weeks, but that would be more to get used to being in pads and getting used to being a little more physical and things like that.”

With all of the restrictions in place including masks and social distancing, it has been a season unlike any other. But that has only made Maguire appreciate the efforts of his players all the more. It has also made him appreciate football more than ever.

“We are abiding by the rules safety wise as much as we can. Obviously, it’s a little frustrating football wise, but it’s better than doing nothing,” Maguire said. “I think it’s great that the kids are out here with each other as a team. It is something they have missed for the last six months and I think it is real important and that is why I wanted to get out here with them. I think I needed it to. I love it and it is really good to see the way the kids have responded. We run them pretty hard and they have worked really hard.”